Harley-Davidson has just updated its entire touring range of motorcycles with a host of well thought out and designed features as part of an initiative called Project Rushmore. We had a chance to experience this first hand with a 300km ride on the 2014 Street Glide in Malayasia. The Street Glide will be the first 'Rushmore' bike to hit Indian showrooms later this year. But before I take you through the lush green countryside of Malaysia let's first look at what Project Rushmore is and the changes it has brought about. 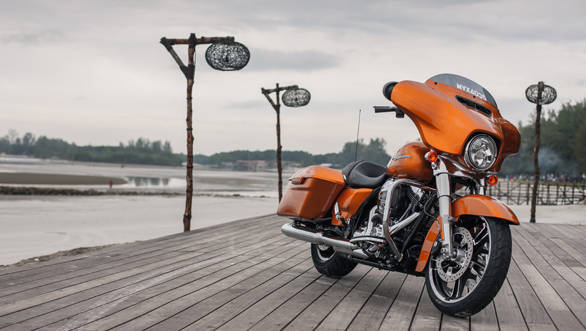 The Street Glide will be the first 'Rushmore' bike to hit Indian showrooms later this year.

According to Harley-Davidson, Project Rushmore is a new approach for the Milwaukee company to designing and building motorcycles. It aims at a more customer-focused approach by spending more time with existing customers and allowing their feedback to influence the design process. It also focuses on an accelerated development time so that the company can react faster to customer's inputs. The project targeted four areas of improvement on their existing range of motorcycles  control, infotainment, feel and style. 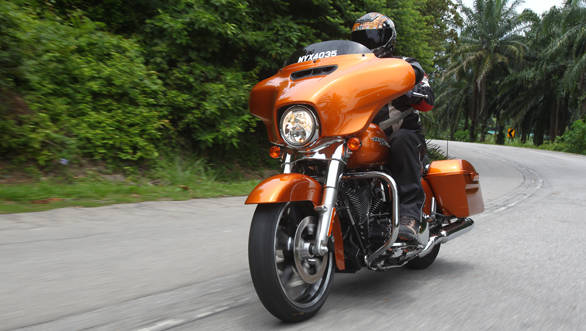 Out on the highway the Harley-Davidson is one comfortable motorcycle.

For a better riding experience, the changes in the 2014 Street Glide come in the form of new larger 49mm forks, Reflex linked brakes that improve control and stopping, and dual halogen headlamps for better light during night riding.

For the infotainment system, Harley-Davidson have kitted out the Glide with a new state of the art Boom! Box 4.3 system with colour screen and Bluetooth connectivity. 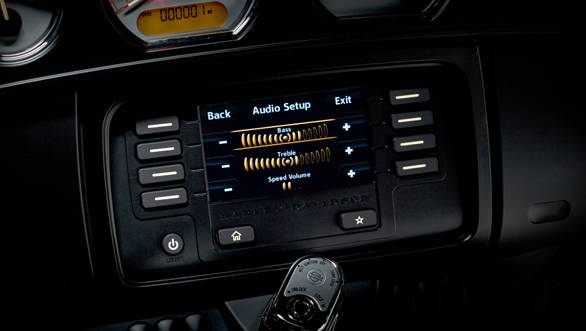 Feel is taken care of by the new aerodynamic 'Batwing' front fairing that now features a slipstream venting system that aims to reduce buffeting at speed while the seats have been updated for rider and pillion comfort. The passenger foot pegs and panniers have also been re-positioned to give the pillion more leg room.

The controls have also been re-designed and the new fit and finish of the hand controls is a big improvement. 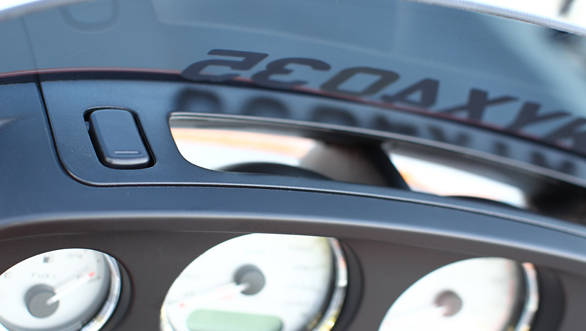 Air vent aims to reduce buffeting at high speed. Button on the left closes vents to prevent water coming in when it rains.

The styling may only have been mildly tweaked visually but more has changed under the glossy paintwork and chrome. The panniers now offer more space while the locking system has been improved to a single lever latch that now allows one hand operation of the lid, something that was a fiddly affair, requiring both hands. And that is it, a number of changes that all aim to make a better motorcycle but as they say the proof is in the pudding so let's get cracking. 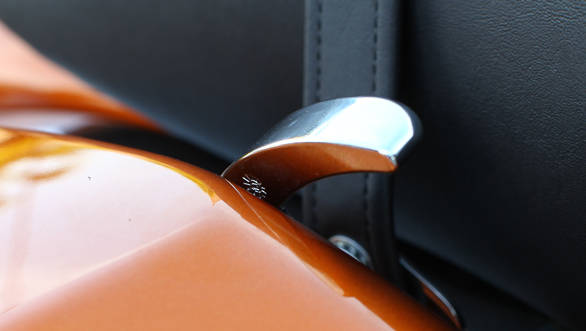 The new latch system on the panniers now allows you to get at your stuff with just one hand.

At a leisurely 8:00am we headed out for a coffee shop for the first stop for the day. Pulling out of the parking lot we were greeted with empty roads and just a few clouds in the sky so no chance of rain. Perfect weather then and the route we would be taking would be nice too. A healthy mix of city roads, highways and twisty mountain bits sounded like just what the doctor ordered. 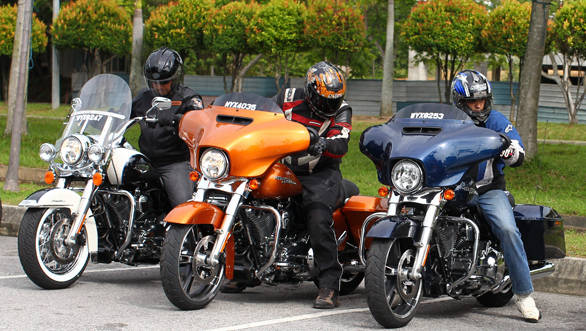 All ready to head out and hit the highway.

The 25km ride to the coffee shop was a good time to get to terms with the 367kg Street Glide and, truth be told, there is nothing much to overcome except for some common misconceptions. Despite how the weight sounds on paper, as soon as you let out the clutch it all but disappears. Then there was the novel experience of listening to music while blasting down the road. The music plays clearly through the large 5.2in speakers, even audible through a full face helmet, and you can also hear car horns and any other ambient sounds too so it's safe as well. The system is well designed with a control system that is pretty intuitive so much so that in no time I was switching tracks and adjusting the volume without taking my eyes off the road. 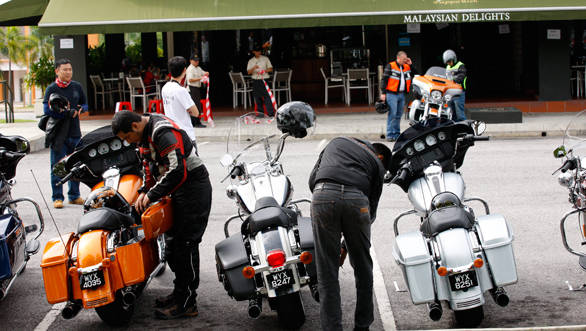 Stocking up on some water at the Coffee shop.

At the coffee shop we stretched our legs and discussed some of the new changes that have gone on with the Street Glide like the new 103 engine. This 1690cc engine makes 142Nm of Torque at 3250rpm (up from 135Nm) with the new twin cam system and integrated oil cooler. There is also a new twin cooling version of the 103 that will burn rubber in the Electra and Ultra Glide. This engine will be liquid cooled around the head and areas around the exhaust port allowing the engine to run cooler while also allowing a slightly higher compression and releasing one more Newton meter of torque from the engine. The whole cooling system is well integrated into the design and it's barely noticeable until you get up close to the motorcycle. 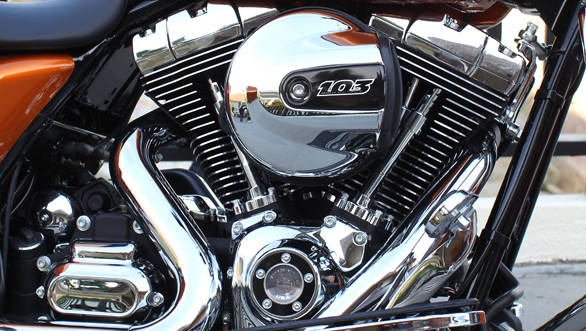 After coffee we headed back out on the highway for some nice high speed cruising and we were able to put to test the cruse control function. The system in practice should be really easy with a control button on the left handlebar. Push to activate and then nudge up or down on the same knob to either increase or decrease the desired speed. There is an indicator on the speedometer that shows the system has been activated but no digital display showing what speed the system is set to. So knowing what speed you have set for cruising is guess work and it is a bit confusing to operate. When I was finally able to activate it, it did allow stress free highway riding but I really don't know how often I would use this in the real world. 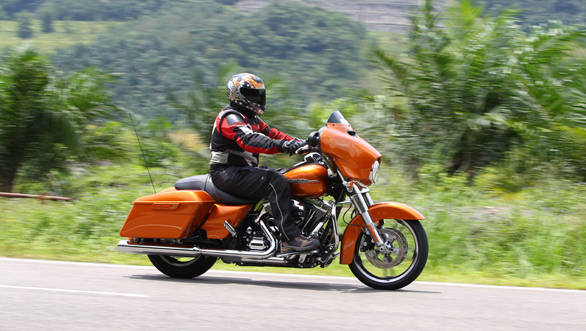 The Street Glide is at home cruising down the highway. The speakers sound best at half volume with just the soft burble of the V-twin playing the background track.

Once at speed, I also had a chance to test the new 'Batwing' front fairing. The new air vent design is meant to reduce buffeting while there is the option of closing the vent with a small switch on the dashboard to keep water from entering the fairing in case of rain. Closing the vent did produce a tad bit more buffeting at speeds above 120kmph but up till then the difference was negligible. It does add to the aesthetics though, making for a striking front end. 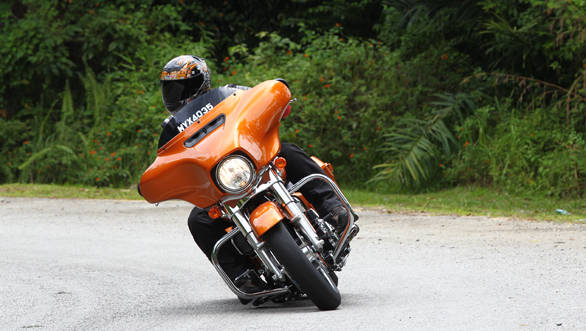 There is some fun to be had with a Harley-Davidson around corners.

After the highway blast we headed on up into the hills for some corner carving and while that may sound funny when the motorcycles in question is a 367 kilo Harley-Davidsons, I was pleasantly surprised again. The new 2014 motorcycles have better ground clearance (135mm) that allows for some quick cornering. So while the ground clearance is in no way sporty it does allow for some brisk riding, just enough to keep you interested. It doesn't take too much to start to grind bits though so the best thing to do is pick a nice high gear and choose a smooth line through corners, riding the endless supply of torque from the lazy v-twin through the hills. 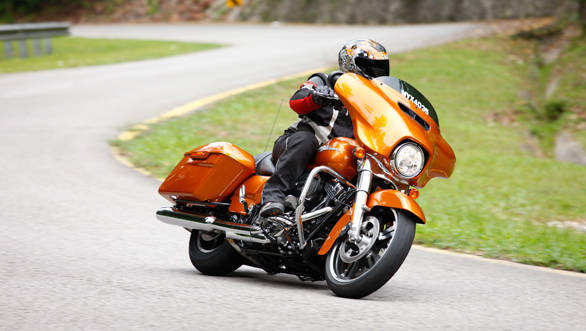 Taking a smooth line through the corners is the key to not grinding chrome bits on the tarmac.

The new 49mm forks are stiffer and indeed the bikes were very stable in the corners but I honestly couldn't comment on if there were any better than the out going model. That would need to wait for a proper test and possibly a chance to compare the old model back to back. The brakes have also been uprated to the new Reflex Linked Brakes system. This is a clever system that only links the brakes when speeds cross 35kmph allowing them to work independently during slow speed manoeuvring. Once they do link up the balance between rear and front brake force is speed sensitive so as speeds increase the balance changes for more stable braking at high speeds. This system works in conjunction with the ABS to make a very stable motorcycle. On the ride there was no safe place to test this system out extensively but it worked unobtrusively and I didn't notice the system at all. When ABS engages now there is a much smaller pulse felt through the lever and is quite an improvement over the old system. 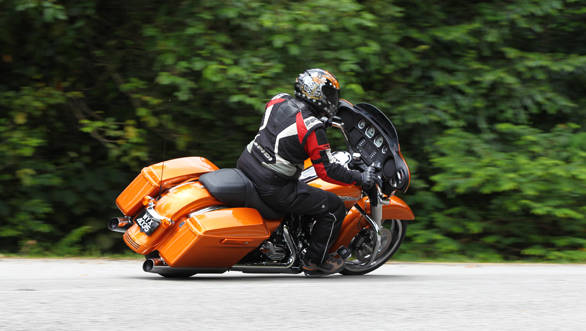 The low down torque from the V-twin engine gives you a number of options when it comes to gear selection for exiting a corner.

We ended the day with a glorious sunset at our resort just outside Sepang, Malaysia having spent a good eight hours in the saddle and covering 300km. The new changes have made the Harley-Davidson a much nicer motorcycle with a lot of well thought out creature comforts added in. The functional and well engineered features do improve the cruising experience and make for a nicer better finished motorcycle. If only they could corner I might actually consider adding one to my wish list. 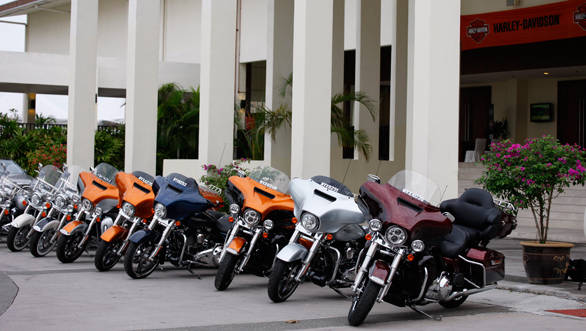 All lined up outside the Golden Palm Tree resort and Spa, Malaysia.