Twenty years. That's how much time has passed since a new and completely unknown Korean brand first entered the country, with the original tall boy, the Santro. Marketed then as the complete family car, Hyundai proceeded to take the fight to one of the country's largest auto manufacturers. Fitting then, that Hyundai calls its birthday cake the Santro, in celebration of its (slightly over) two decades in India, with one of the most awaited cars in one of the most-selling segments in the country. We did get an opportunity to spend a little time with the Santro at a test track earlier, and you can read our detailed first impressions here. 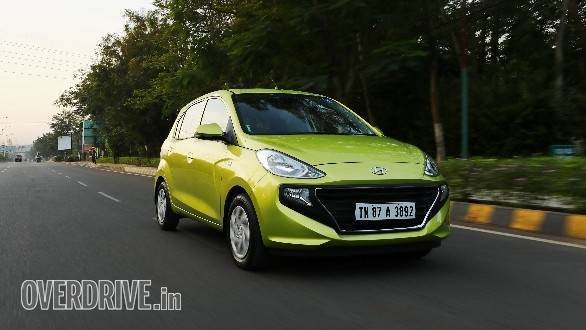 Is it really all-new?

The new Santro is based on a platform called the K1, a slightly modified version of what underpinned the erstwhile i10. As such, that's exactly the positioning of the new Santro, serving as a filler between the smaller Eon and marginally larger Grand i10. 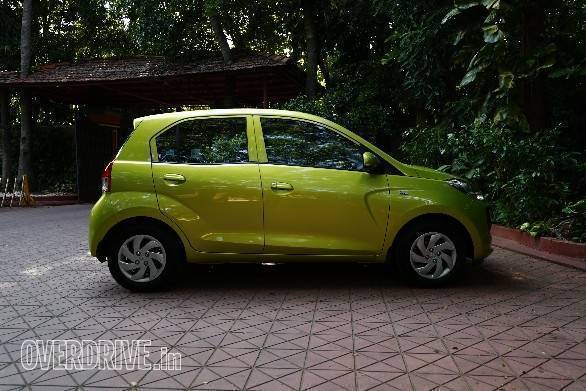 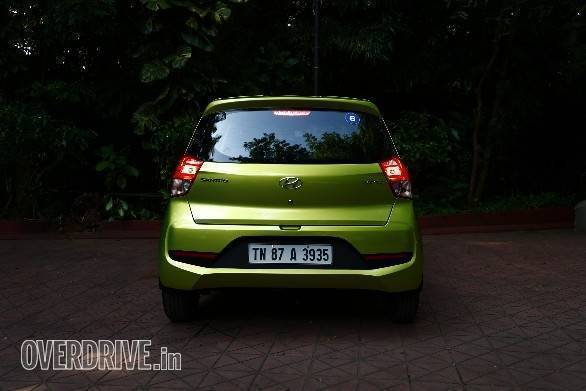 For reference to the original Santro, the new one is 45mm longer, 120mm wider and with a 20mm stretch in wheelbase - it's a tall boy design still but undercuts the old one by 30mm in height. That equates to more space in the cabin of course, with the new Santro gaining vital legroom and shoulder room - a not-inconsiderable 95mm of the latter front and rear. It's powered by a tweaked version of the 1.1-litre Epsilon petrol which did duty in the i10, but the big news is that it's offered with an AMT - which is all-new. The five speed automated manual gearbox has been developed in-house by Hyundai Motor India specifically to fit this drivetrain. So, yes, the new Santro has a fair smattering of all-new bits.

How does it look? 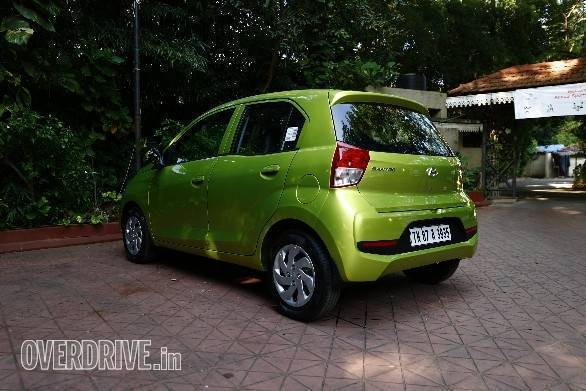 We know what you're thinking - isn't that an i10 with a big, smiley grille? Well, it's come full circle, considering the i10 was the successor to the original Santro, and now the successor to the i10 is the new Santro. So while the sentimental bemoan the lack of the quirky looks of the original, the new Santro is still smartly styled - mixing conservative major design elements with youthful ones for a car that will impress and appeal to the first-time buyer (like the boomerang creases on the sides and new Diana Green colour exclusive to the Santro). What we can say is that while we were on our test drive, we got more than a few thumbs up from passing motorists. Everyone seems to know exactly what this car is, and that's a nice feeling.

The first thing you realise when you seat yourself in the cabin is that the Santro feels spacious, and far from being a budget car. Everything - from the dash, AC vents, the door pads, the chunky steering wheel, the sporty dials, the power window switches, faux leather gear lever surround - it all feels fairly premium for the segment. Especially, with the 7-inch touchscreen infotainment specced, which has Apple, Android and MirrorLink integration, apart from onboard navigation. Speaking of smartphones, there's a very useful space to keep yours next to the handbrake lever. The driver's seat has you perched relatively high, for better visibility. 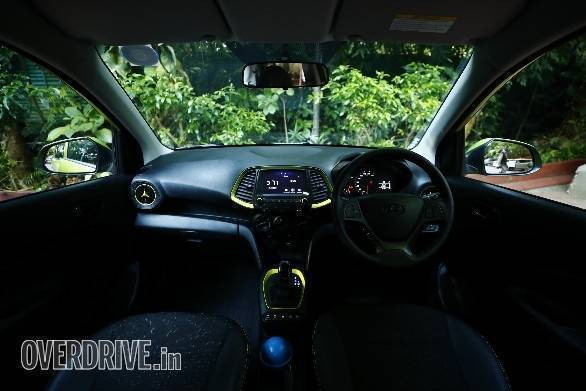 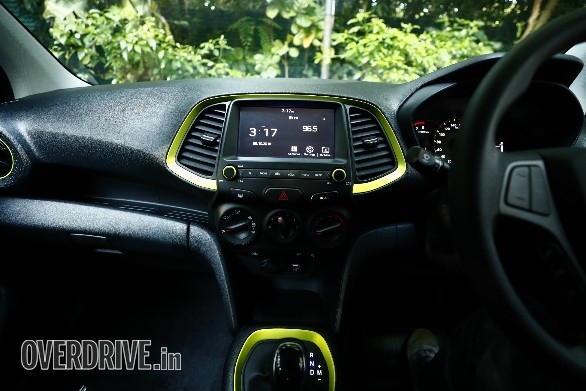 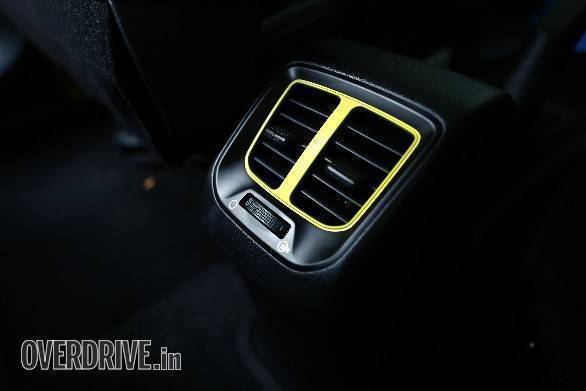 There is a caveat for taller, or larger framed drivers - neither the driver's seat nor steering is height adjustable on any variant. So the steering wheel ends up feeling like it's a little too low, or close to your thighs, and the top of the wheel obstructs your view of the instrumentation a bit. The good news is that you won't be rubbing shoulders with your co-driver. The new Santro is wider than before, but three abreast on the rear bench might still be tight. Headroom and leg room, both front and rear, is impressive and more than adequate. The rear AC vents is a huge talking point and will likely pull in buyers all on its own! Special mention must go to the all-black interiors only available with the Diana Green colour, which gets very cool colour matched elements inside the cabin and on the upholstery. As far as safety goes, one airbag is standard across the range, with two on offer only on the top variants. That means the AMT models, which isn't available on the top trim, doesn't get two airbags, even as an option. Speaking of what it's lacking, the Santro doesn't get lane change indicators, or a wash wipe function for the wipers. 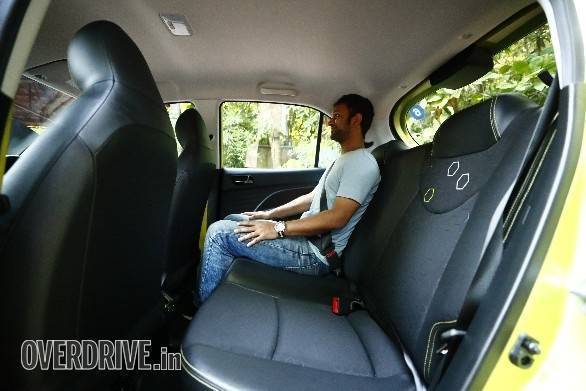 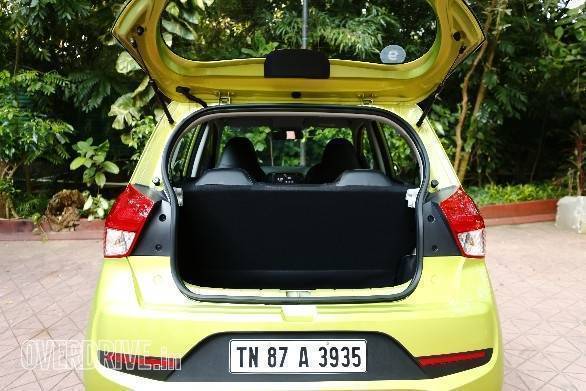 Most importantly, how does it drive?

The new Santro is powered by a 1,086cc petrol engine, an updated version of the familiar Epsilon engine, now with 69PS and 99Nm torque. It's available with a five-speed manual and a five-speed AMT, and the good thing is rated fuel efficiency for both is the same at 20.3kmpl. 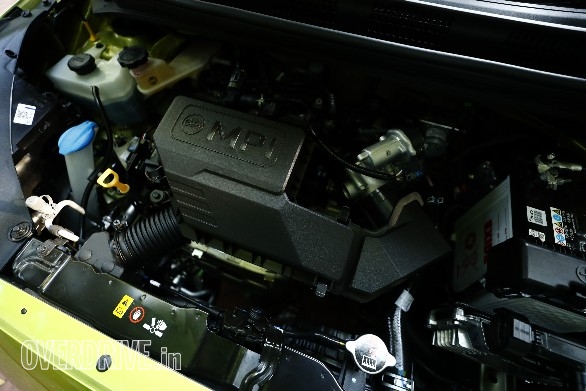 We're going to focus on the AMT, since that's the all-new gearbox. Plus, it's really good! To start with, NVH levels are very well contained, with no noticeable vibrations through the pedals, or wheel. The engine sounds quiet and you only hear it when you're nearing the 4,000rpm mark. That being said by the time you reach that point, you're already making fairly swift progress, thanks to the impressive mid-range. 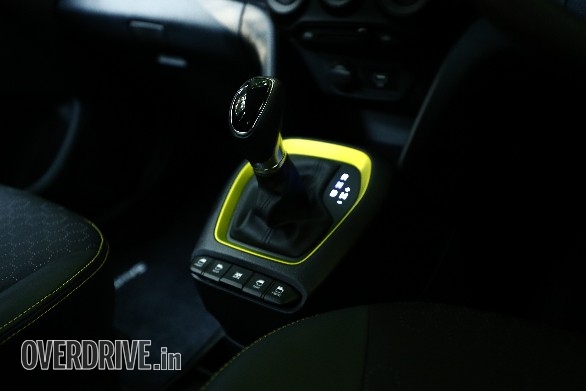 The AMT knows this, and will shift up for you, quickly and seamlessly. With this gearbox, the only nod of your head will be of approval! In fact, this AMT is so good, it's easy to mistake it for a  torque converter unit, and that's saying a lot. Even crawling in traffic, there was none of the low-speed jerk of the clutch slipping and releasing, even with partial throttle inputs. The gearbox favours shifting up quickly and will even settle into fourth at fairly low speeds in traffic. Though, it does such a good job of knowing when you want a lower gear, and it gives you that gear so quickly, it never registers that you've been trundling around in that high a gear.

What about its ride quality?

The new Santro doesn't rock the boat when it comes to suspension componentry, but goes a step further instead with a very, very well tuned setup. It handled deep joins in the road, speed breakers, and patchy tarmac with the same kind of poise it handles smooth highway. 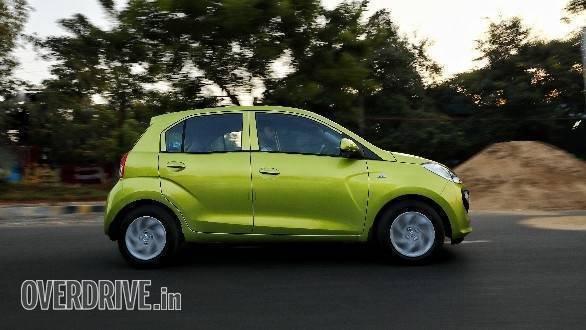 We tried to get the suspension to bottom out, and it only thudded over a series of large speed breakers. On everything else, you get a feeling that you'll never run out of its damping abilities, though it remains to be seen how well it handles a full car load of passengers. And, well, handling the car is a breeze thanks to a light steering which returns to centre more than willingly. We're told customers love it, since it makes city driving easy, but we prefer a little more weight and a lot more feedback, once the speeds cross 90kmph. That being said, the car's ride doesn't falter at higher speeds. It's just that the steering doesn't inspire the most confidence at speeds over 100-120kmph since small movements at the wheel affect larger than expected direction changes. These instances also show up the tendency of the Santro to lean a little more than what's comfortable, when making sudden direction changes.

The new Santro has a legacy to uphold and given how well put together the package is, we don't see it having problems there. It is a little more expensive than first thought, even with its introductory pricing. But with a bunch of segment-first features and its premium feeling cabin, most variants do exhibit great value when compared to the marginal premium asked over the competition. 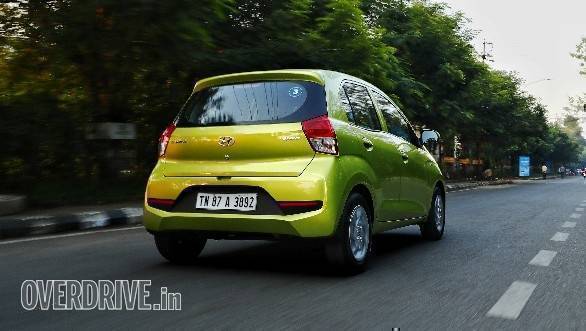