In just about two years the Skoda Kodiaq has established itself as a stylish and luxurious offering in the full-size seven seat premium SUV space. It has also turned out to be an interesting alternative for those not wanting the boldness of SUVs like the Toyota Fortuner and Ford Endeavour. Interestingly, Skoda has just added a new variant to the Kodiaq line-up dubbed the Scout, which gets a little dash of ruggedness to add to its classy, elegant design. We spent a day driving it from the cities of oranges, Nagpur, to the Pench Tiger Reserve. Here's everything you need to know. 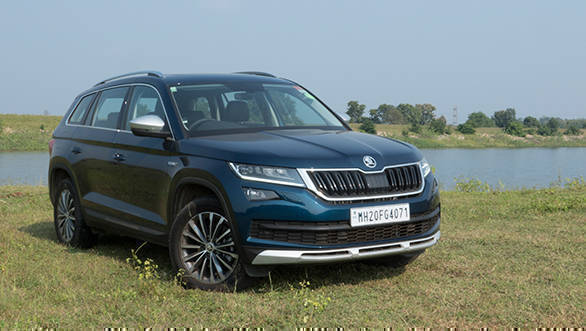 The Skoda Kodiaq Scout gets a few exterior changes over the standard versions including silver coloured front and rear skid plates, silver wing mirrors and a full black grille

Changes to the exterior are not extensive but with that said, the Kodiaq Scout gets a 'Rough Road Package' that brings underbody protection with it. There's silver scuff plates at the front and rear and the trademark Skoda grille gets a full-black treatment as well, while wing mirrors are finished in matte silver and front fenders also get the Scout name. Clearly, there's a focus on distinguishing the Scout as a more rugged SUV and the changes though subtle, do their job well. The Scout also gets black plastic cladding and different looking alloy wheels (same, 18 inchers), to the same effect. The Skoda logo has been replaced by the name on the bootlid, with the letters spaced out from each other, which looks good too. At the rear, the Skoda Kodiaq Scout gets the Skoda name instead of the Skoda logo

What about the interiors?

There's ample changes inside, to help distinguish the Scout from the others. The good news is that the Scout gets almost everything the top of the L&K variant gets. It does not get the virtual cockpit aka full-digital instrument cluster display, but does get the swanky-looking, all-glass, 8 inch screen with capacitive touch and the sensitivity is excellent, just as before. Needless to say, Apple CarPlay and Android Auto connectivity are standard and so is in-built navigation system. The dashboard gets brushed wooden inserts, exclusive to the Scout variant. 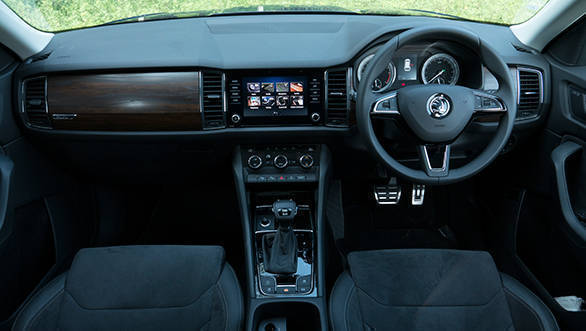 Also exclusive are Alcantara inserts in the door pads, for that added premiumness. More importantly the Scout gets seats that use Alcantara and leather both, seen first on the new Octavia RS and these certainly make for a sportier and more premium feel. The Scout also misses out on the L&K's 360 degree camera but does get semi-automatic park assist, along with the colour-changeable mood lighting. It also gets the panoramic sunroof, which adds to the sense of premiumness and gets an anti-pinch function that will have the glass open up in case an obstruction is detected while closing. 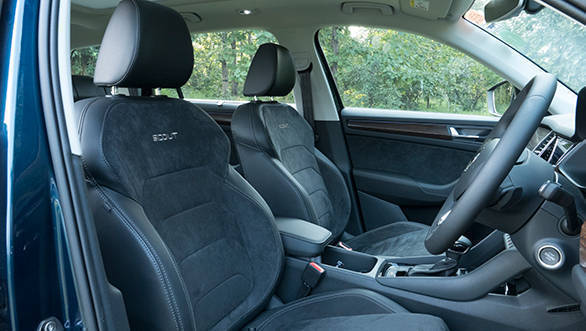 Both front seats are electrically adjustable and three-zone air-conditioning has been carried over too. The Scout also gets nine airbags as standard, underlining Skoda's importance to occupant safety. Of course, convenience features like the detachable torchlight in the boot, the umbrellas stowed into the front doors and the Nap package consisting of the retractable neck restraints in the second row headrests along with the blankets have been carried over as well. The Scout however does not get the retracting door protectors, which help you avoid scratching the edges of the doors. This is a bit of a miss, given the Scout's positioning as a more outdoorsy version.

Skoda has added a unique, off-road mode to the Scout to complement its SUV virtues better. The mode works well in sync with the Haldex all-wheel drive system and can be selected via a dedicated switch positioned behind the drive selector lever, at speeds up to 30kmph. Skoda tells us that while the torque bias is such that 96 percent torque is sent to the front wheels in normal driving conditions, the system can split the torque between the front and rear wheels in slippery conditions. It can send up to 90 percent torque to the rear wheels only and up to 85 percent torque to one single wheel if required. The Skoda Kodiaq Scout gets a dedicated off-road mode that is exclusive to it, to offer some off-road ability and can be activated by a single button positioned behind the drive selector

How does it drive?

The powertrain remains unchanged. The Kodiaq Scout is thus powered by the same 2.0-litre, four-cylinder diesel engine which puts out 150PS and 340Nm and is mated to a seven speed DSG. The Scout is thus very impressive from behind the wheel thanks to the super smooth engine, the slick shifting and intuitive automatic gearbox and also how quiet the cabin is. The engine feels slightly underpowered at times, though with that said, cruising at well above 120kmph is never an issue. One distinct highlight about the Kodiaq has always been its car-like feel and handling and considering that the Scout remains unchanged mechanically, it impresses as much. 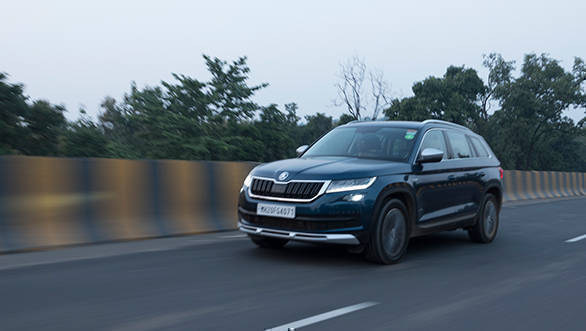 Just like the other variants, the Skoda Kodiaq Scout is very impressive on highways thanks to its well-tuned suspension, planted feel and connected steering

While many would assume the Scout has a higher ground clearance or slightly different suspension setup that certainly is not the case. What's more, the highway from Nagpur to the Pench Tiger Reserve, just over 100km north of the city is a well-surfaced, four lane road and the Kodiaq had no trouble making light of the distance. I have always believed the Kodiaq is a great highway machine and the drive in the Scout only helped me reaffirm the belief. The well-tuned suspension offers a firm yet comfortable ride along with a solid, planted feel. The steering feels connected and also adds to the car-like feel which is something we have always appreciated. 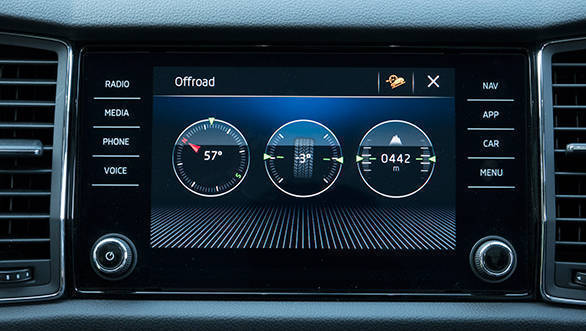 Switching to off-road mode has the infotainment display offer information like steering angle, direction and height above sea level in the Skoda Kodiaq Scout

Inside the Tiger Reserve we got to drive on dirt as well. Though proper off-roading was not on the menu I did manage to climb up and down a couple of small hills. Off-road mode activates hill descent control and all the driver needs to do is manage the steering, while the electronics help you come down safely. Unladen ground clearance of 188mm helps as well and adds to confidence when treading off tarmac. Switching to off-road mode also has the infotainment display offer information like steering angle, altitude above sea level and a compass. Having the steering angle helps, especially when tackling a tricky section. 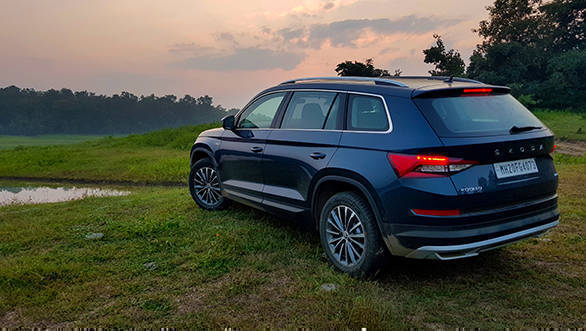 With its packaging and pricing, the Skoda Kodiaq Scout is easily the best variant of the Kodiaq on offer currently

Priced at Rs 33.99 lakh ex-showroom (introductory), the Skoda Kodiaq Scout gets almost all features and equipment the top of the line L&K version does, especially bits that matter. Effectively it retails at a little under 3 lakh rupees less than the L&K, making it the sweeter deal. Of course, the Scout also gets the off-road mode exclusively  it may not turn the Kodiaq into a proper off-roader but does add to its already impressive feel, bringing some bit of off-road ability. The Kodiaq has always impressed with its able highway manners, not to mention, its polished, elegant feel and feels like an even better packaged SUV in this trim.