For much of the last two decades, if you've wanted a big, burly, seven-seater SUV that doesn't have a luxury badge on the front of it, you've aspired for the Toyota Fortuner or the Ford Endeavour. There have been others but these two have been the ones that have caught the Indian buyers fancy. The Fortuner has been the sales leader but the Ford Endeavour is the one that has been a perennial OVERDRIVE favourite. 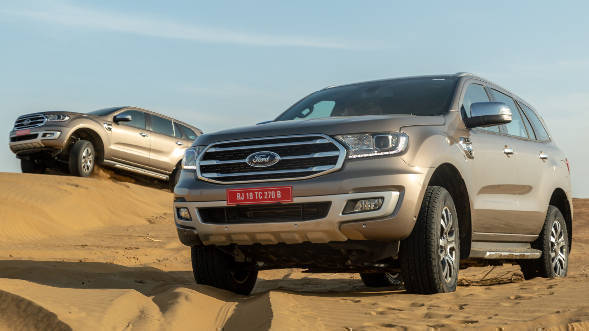 As with the rest of the industry, the Fortuner and Endeavour have both been updated to meet the BSVI norms coming into effect in April. The update to the Endeavour is more significant and we recently found ourselves in the arid landscapes around Jaisalmer to see what these changes have done for the Ford.

It doesn't look any different...

Not entirely, the Endeavour's face has been freshened up a bit with the addition of a new full-LED headlamp cluster. These units are a sizable improvement over the earlier halogen projectors with a throw that is longer and wider. The sharper internals also adds a bit more intent to the already imposing look of the SUV. Another minor change is that the louvres on the sides now just say Endeavour and not the engine specs. 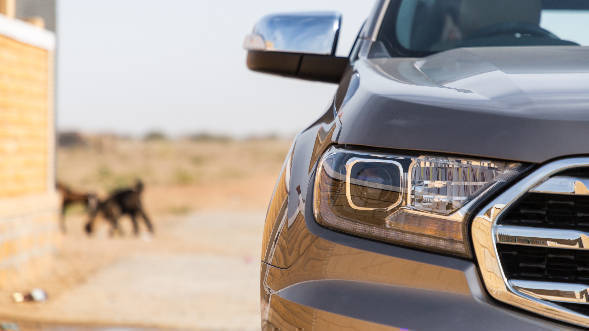 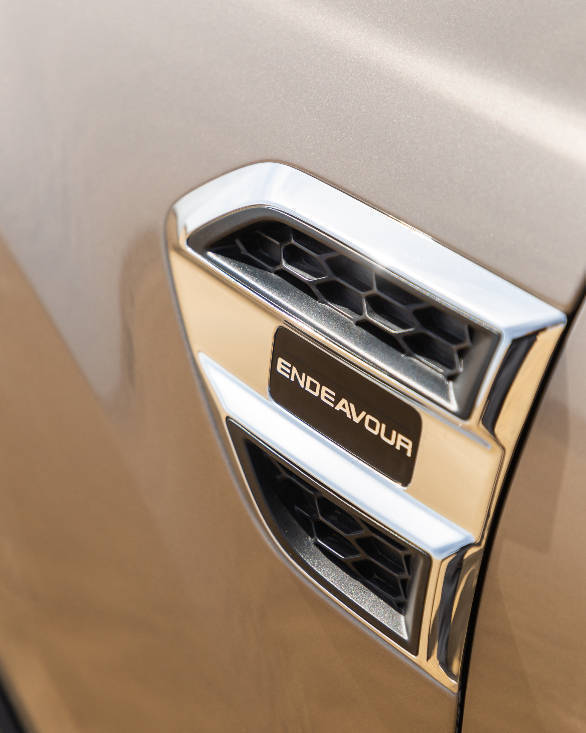 While this was a good opportunity to give the Endeavour a more significant visual update, we don't think that it desperately needs one just yet. The SUVs clean, simple lines and upright stance have aged quite well. Ford India had added a larger, more chrome-laden grille, a revised front bumper, dual-tone alloys and the diffused silver paint shade seen here last year, and these changes have held the Endeavour's in good stead. 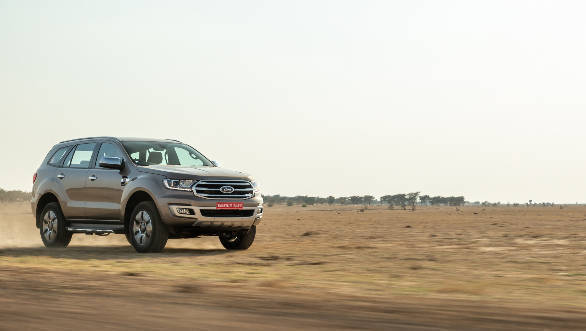 The entire drivetrain. The Endeavour now comes with a single 2.0-litre turbocharged diesel engine, replacing the earlier 2.2-litre four-cylinder and the 3.2-litre five cylinder turbocharged diesels. The new BSVI-compliant engine comes from the Blue Oval's EcoBlue line. This is the diesel equivalent of Ford's Ecoboost petrol engines. The motor is a ground-up new design focused on improving efficiency, refinement and meeting emission norms. 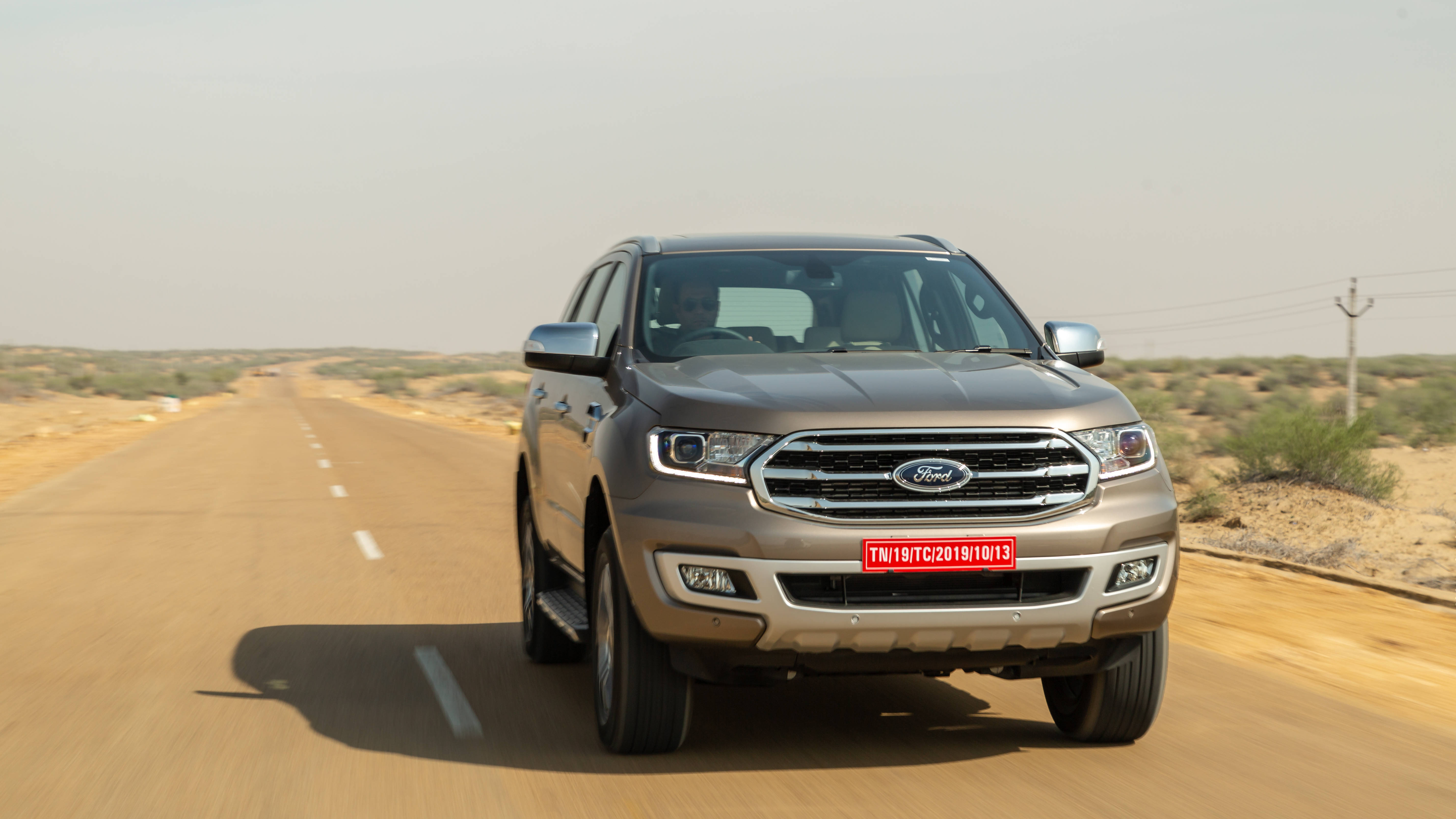 In practice, this translates into a more sedate driving experience on the road than earlier. It's much quieter than before on the inside, although still not up to the levels that some other 2.0-litre diesels manage to achieve. There are some vibrations felt through the driver seat and footwell but again this is much better controlled than before.

The motor's 170PS and 420 Nm outputs are 10PS and 35 Nm more than the 2.2 but doesn't match the 3.2's pace off the line, given it loses 20PS and 50Nm to the larger engine. The immediate, slightly raw response from the earlier motor coupled with that strong mid-range shove has been replaced by a more linear experience. The Endeavour continues to be a seriously impressive highway machine that'll make covering 800 km in a day seem perfectly possible. There's also just enough shove to make fast highway overtaking a reasonably straight-forward affair, or ensure you make the most of the gap that's just opened up in the road in front of you. The one place where you realize that the motor could have done with better numbers is in stop-go situations. Its lack of low-end grunt is evident here, the motor needs to rev out a bit more than ideal to build up speed.

The other big change is the new 10-speed torque converter automatic that Ford has paired the engine with. This unit has been co-developed with GM and is fitted to pretty much all cars that run on a RWD platform for both carmakers. It debuted on the Ford F-150 pickup in 2017 but has since found its way to quite an eclectic range of offerings, right from the facelifted Mustang to the Camaro and the newest Cadillac Escalade. 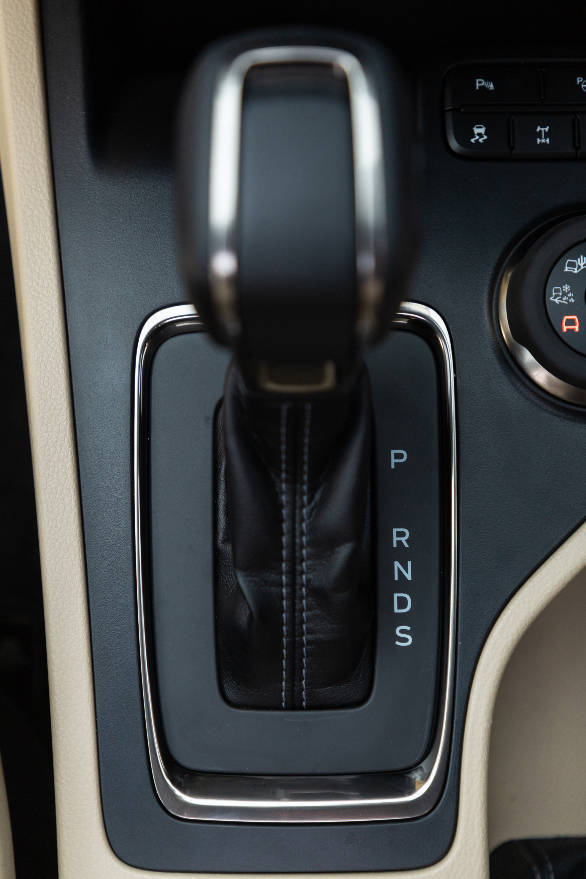 The gearbox is a massive step up from the earlier six-speed auto. It's as intuitive as any of the newest torque converters out there, always letting the SUV use as much of the torque as possible. It'll even skip as many as five gears while accelerating or braking to make sure you always have enough grunt on tap, via a function Ford calls Selectshift. This allows it to mask any lag that the motor might have to a large extent. Upshifts are instantaneous and barely perceptible, although while scrubbing off speed hard, sometimes the gearbox seemed to not be able to keep up. But this is a fairly normal occurrence and something we've even experienced in the well regarded 8-speed ZF auto. 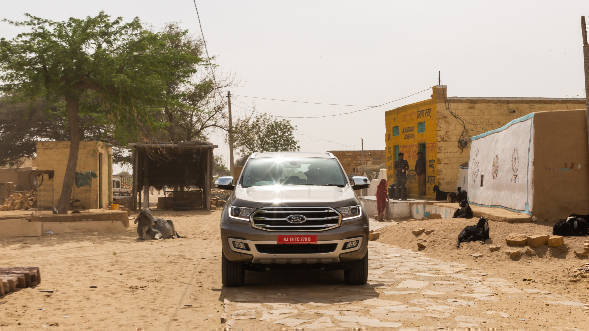 Ford also claims that this gearbox helps improve fuel economy by a significant 14 per cent(12.4 kmpl). We think this is a fair claim. The new gearbox isn't over-eager to shift up in regular driving. Although, a large number of closely spaced ratios ensure that on a steady highway cruise you'll find yourself in eighth, ninth or tenth gear quickly enough. We saw the engine ticking over at around 1,500 rpm in 10th at 100 kmph. Once here, in unhurried driving, the gearbox tends to hold onto these higher, overdrive ratios for longer.

In more spirited driving, the gearbox will change tack to ensure you remain in the thick of the action. It'll hold onto gears till about 3,000 rpm and shift only after that, staying away from the higher ratios. There is a sport mode for the gearbox that locks out the Selectshift function and holds on to revs for longer. But we think the normal mode is best for this SUV, given the gearbox's general intuitiveness. We also missed paddle shifters, given the quite fiddly shift buttons on the new gear selector.

Otherwise it's business as usual for the Endeavour. The SUV is very comfortable over most road surfaces at all kinds of speeds. With the update last year, Ford India worked on softening the suspension set up and reducing dive. This has worked but some of the sharp handling of the Endeavour we liked so much has been lost. Around corners at higher speed, there is some more lean and sideways movement. But these traits are nothing out of the ordinary in this segment. In fact, the Endeavour remains the most rewarding car of this class dynamically. 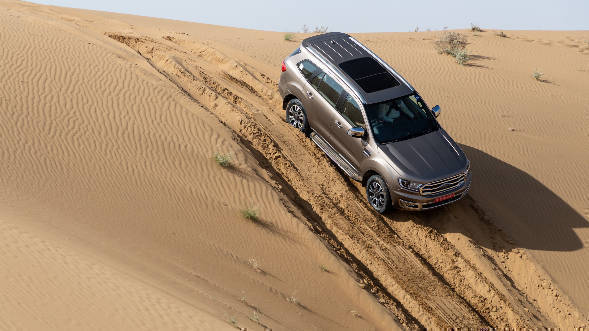 The ten-speed automatic's Selectshift function has made the Endeavour even more capable off-road. We went dune-bashing at the Sam sand dunes near Jaisalmer and the Ford put up quite the show. The new gearbox allows you to lock in a range of ratios and doesn't shift beyond that. This maximises the effectiveness of the Sand mode in the terrain response system by making sure the vehicle doesn't lose momentum, a key component of making progress in the sand. We would go so far as to say that the new Endeavour is now a great learning tool for amateur off-roading enthusiasts. Of course, we had highly trained personnel to guide us through the trickiest sections on this course, but the SUV definitely made things easier. 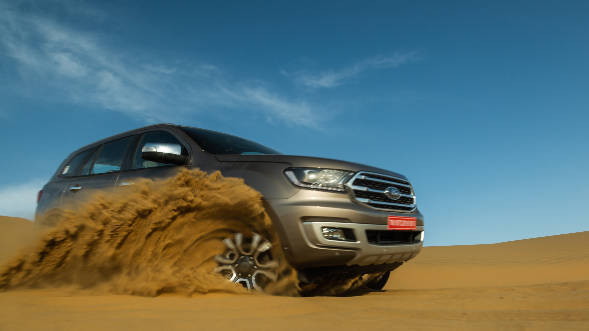 Can it one-up the Fortuner now?

With this update, Ford has worked on the bits that'll make the Endeavour appeal to the widest section of buyers in this segment. The newfound levels of refinement and efficiency are big positives in a segment where owners typically spend as much driving as being driven around. Last year the features list had seen sizable additions and now Ford has added to that by making the FordPass suite of connected-car features standard across the Endeavour line. This increases the Endeavour's advantage over the Fortuner in this regard even further.

We only wish the brand had brought in the bi-turbo version of the EcoBlue available in markets such as South Africa and Australia. This would have kept the Endeavour's reputation as a potent performer intact, and addressed some of the slow-speed sluggishness we mentioned earlier, the only significant drawback of the new car. 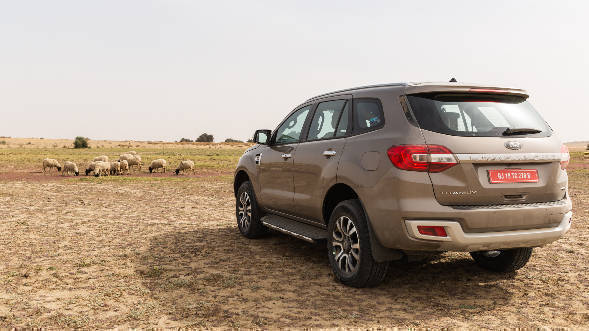 A look at the new line-up's prices may give some answers as to why we don't get the more powerful engine. The lineup has been trimmed to three variants now, starting with the Titanium 4x2 at Rs 29.55 lakh and going up to the Titanium+ 4x4 at Rs 33.25 lakh. These prices are lower than what the BSIV car asked for, a highly commendable achievement for a BSVI-compliant diesel SUV. More importantly, these starting prices are around Rs 2 lakh less than what a comparable BSVI Fortuner asks for. Prices are set to increase by Rs 70,000 in May, but even after this the Endeavour will keep its advantage intact in the lower trims.

These prices along with the competitive warranty and service prices that Ford promises are a big psychological victory over the Endeavour's closest rivals. It may have lost some of the 3.2's performance edge, but the added sophistication means the Endeavour is now a better all-rounder than ever before.