A measure of how far ahead of the curve the Ford Ecoport was when it launched, its only now - a good eight years later - that you have a sub-four-metre SUV offering from most of the high-volume carmakers in the country. But this has also meant that this segment is now arguably at the core of the Indian auto industry, and privy to fierce competition. To Ford India's credit, the Ecosport continues to be a consistent seller, what with the regular updates and variant rejigs. One such development, while an all-new Ecosport is being readied, is the Ford Ecosport SE. 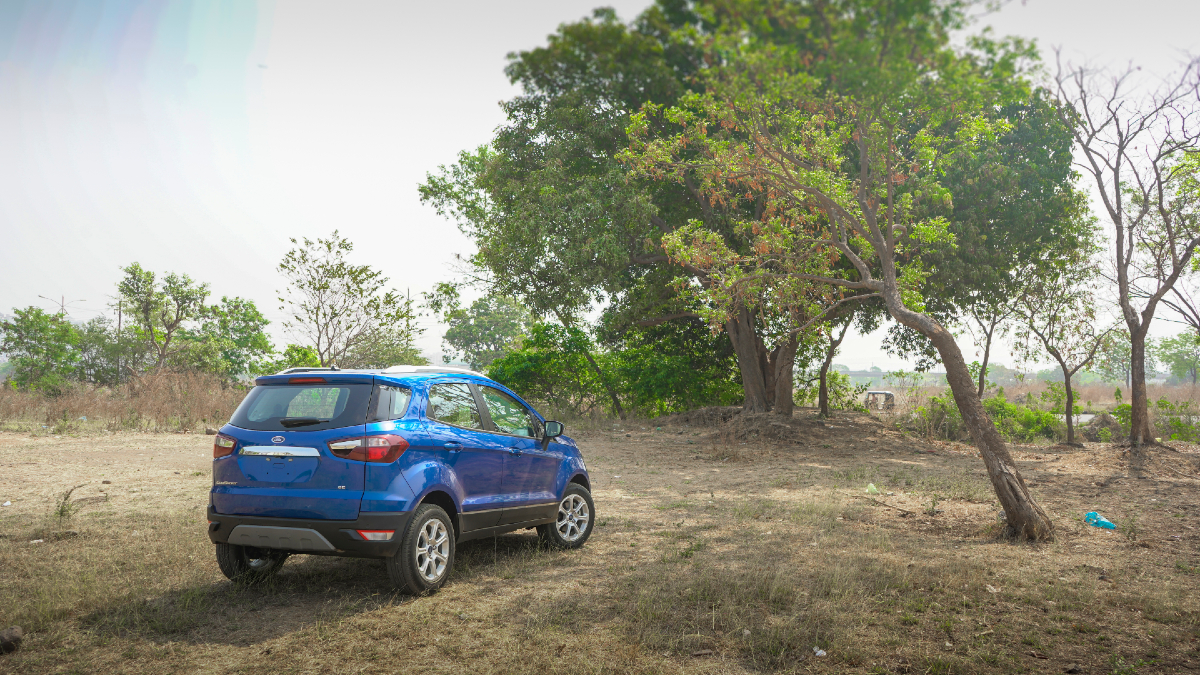 The Ford Ecosport SE is essentially the international-spec Ecosport, an SUV that has been manufactured at Ford's Chennai plant for global markets since 2015. Its introduction to the Indian market comes after a 2020 ruling from the Ministry of Road Transport and Highways that allows passenger vehicles with a seating capacity of up to nine people to be sold without a spare wheel, as long as tubeless tyres, TPMS and a puncture repair kit are provided.

So with the spare wheel gone, there have been some minor visual tweaks. The number plate has now moved to the centre of the boot lid in an indented space previously occupied by the wheel, while the rear bumper has been given a faux skid plate in place of the earlier numberplate's housing. The Ecosport SE carries the same chrome and body-colour highlights as the Titanium trim as well as the single tone alloys, unlike the dark-themed details on the Ecosport S. 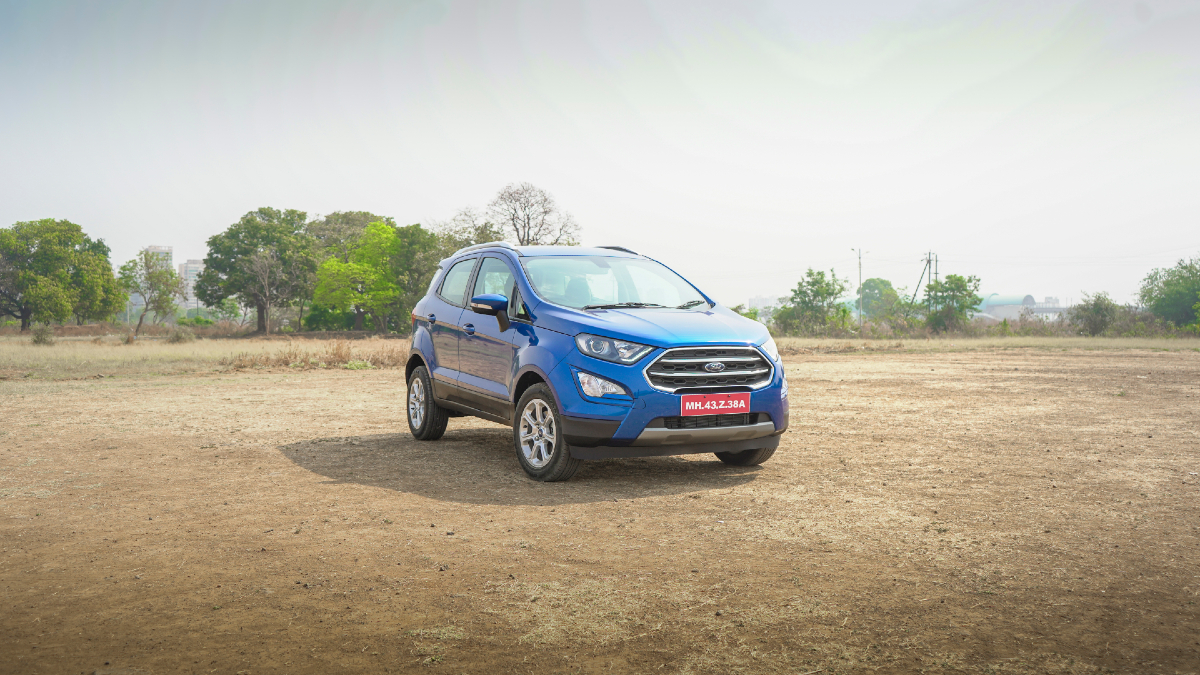 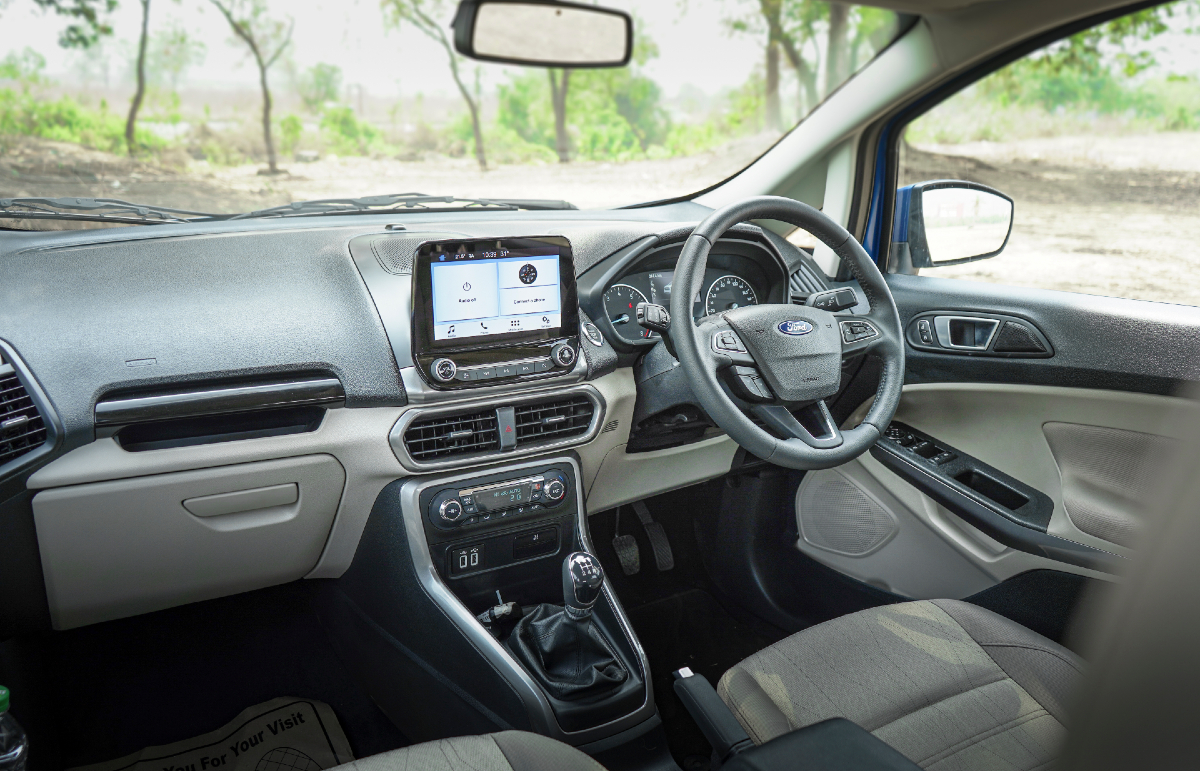 Similarly, on the inside, the Ecosport SE is trimmed in the more sedate light-beige and black combination. The features list is also quite similar to the Ecosport S with some kit being dropped like leather seats and puddle lamps. The strong suite of safety tech remains intact, however. The cabin continues to be as well put together as before, although the older architecture means that space management isn't quite like some rivals.

We think picking the Ecosport SE over the regular Ecosport S will largely be down to personal preference, given Ford's customers have shown interest in this version. In our eyes, the spare wheel adds a distinct character to the Ecosport, shoring up its SUV-credentials. With this gone, some sense of cohesiveness has been lost with the visibly more abrupt rear section. 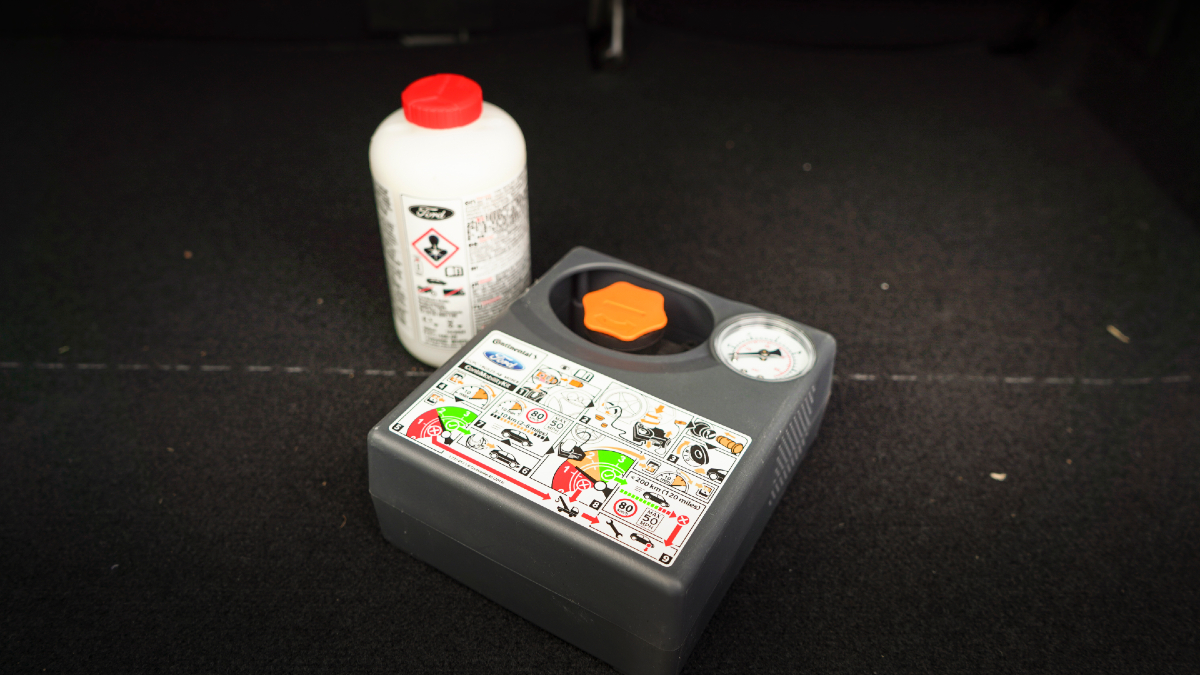 How do I fix a puncture on the Ecosport SE?

The Ecosport SE comes equipped with a tyre sealant kit from Continental. This includes a liquid sealant compound and a pump that needs to be fitted to the flat tyre via the tyre valve and is powered by the 12V power outlet in the car. Once on, the device pumps the sealant into the tyre in 10 minutes along with some air. A gauge measures when the process has reached this stage. Next, the car needs to be driven for another 10 minutes to generate heat in the tyres. This expands the sealant to coat the tyre from the inside and with the rising air pressure inside the wheel, pushing it out of the puncture(s) and plugging the holes. The plugs harden once exposed to the cooler air outside. Next, the tyre can be filled to the recommended air pressure and used for 200 kms before needing a replacement. The car can't be driven over 80 kmph and this treatment doesn't work on other tyre damage like sidewall tears. 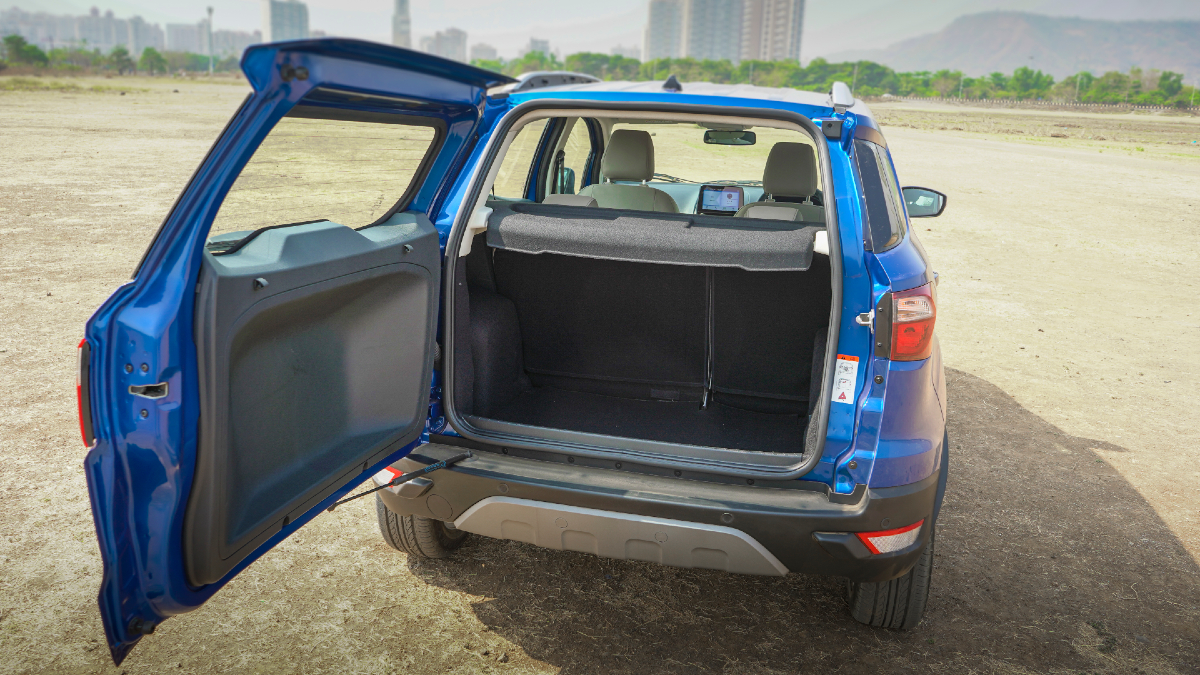 Now, this system might be handy in more developed markets, but may not be the most viable solution for India. With punctures a common occurrence on our roads, replacing a tyre every time you are struck with one is an expensive proposition. Also, the process of using the sealant effectively may not be familiar to many users. So the Ecosport SE is probably best used as an urban runabout where fixing a flat tyre is a short limp or a phone call away. 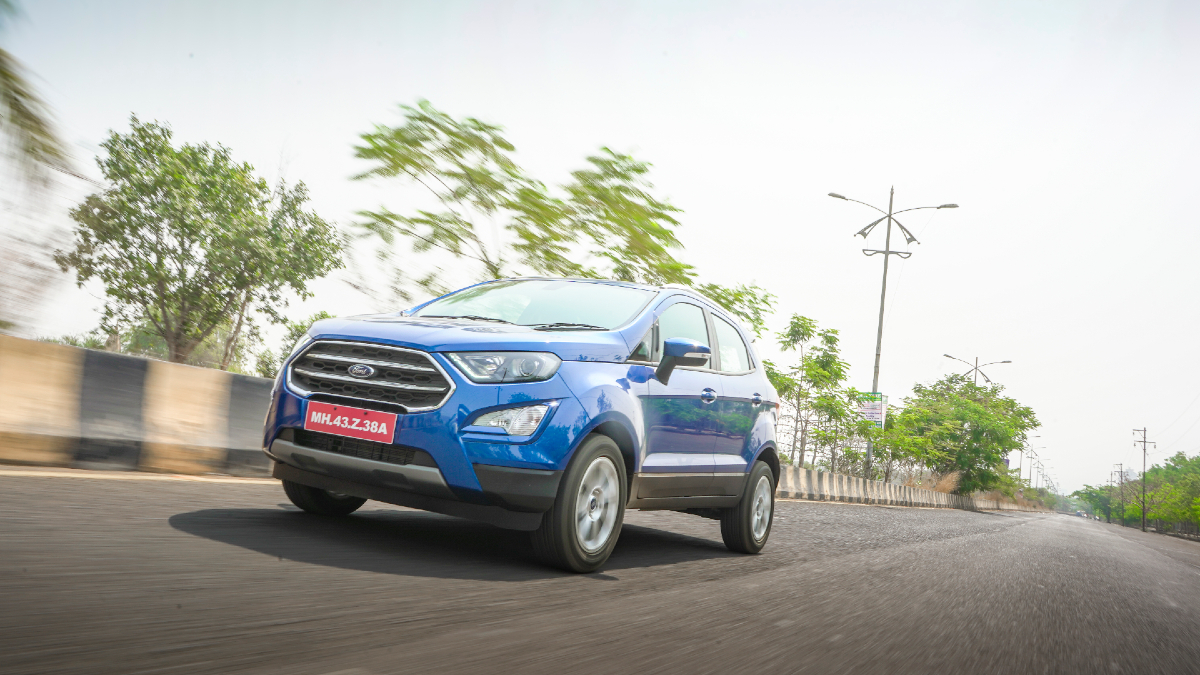 Ford Ecosport SE: How does it drive?

The Ecosport SE is mechanically identical to the standard Ecosport and continues with the same 1.5-litre petrol and diesel engines, although there is no auto option unlike in the lower-spec Titanium Plus. We sampled the SE with its 1.5-litre petrol engine and came away largely impressed with its demeanour. There is a noticeable judder running through the car at idle, this being a large three-cylinder, but this fades away as soon as you are on the move. With its 122PS, it's as powerful as its turbocharged competition although torque is at a slight deficit at 149 Nm.

This translates well onto the road though. The Ti-VCT motor is quite tractable, if not as rev-hungry as some rivals, with a flat spread of torque throughout. So slowing down for traffic or for speed bumps sometimes doesn't even need a downshift, and there is generally uninterrupted progress to be made. Even out on the highway, the petrol Ecopsort holds speeds well and overtakes aren't really a hassle. We would have liked a bit more precision from the way the gearbox operates and slightly reduced clutch travel, but with the lightness of the clutch and the precise brakes and throttle response, the Ecosport SE is an easy car to live with.

The Ecosport SE also continues with Ford's tradition of making cars that feel tied down to the road, body movements at any speed are well controlled and some of the understeer we complained of earlier has been brought in check with the new Goodyear Assurance tyres. Of course, the trade-off for this remains in the form of the stiff edge to the ride quality, which can't quite round off sharp imperfections as well as some rivals. 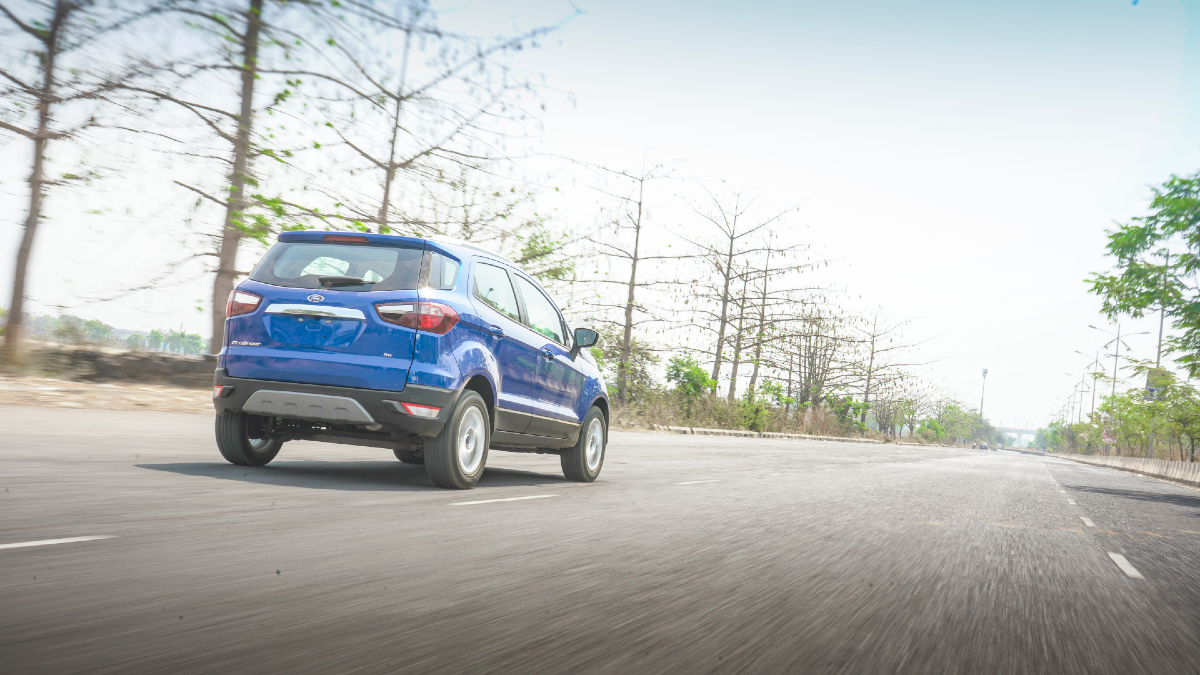 Ford Ecosport SE prices: Should I buy one?

Priced at Rs 12.44 lakh for the petrol and Rs 13.26 lakh for the diesel, on-road Mumbai, the Ecosport SE is up to Rs 61,000 less than the Ecosport S. Unless you specifically like the new look the SE brings with it and intend to use it largely in an urban setting, the Ecosport S is a better buy we think. It offers the safety net the spare wheel brings with it, is better equipped and is still a distinctive looking car. Either way, for the tight driving experience it offers and a fairly appealing list of features, any version of the Ford Ecosport continues to be a viable choice in the sub-four-metre segment.