In the car world, the cheapest car, cheap premium cars or cheap luxury cars even, tend to make the car guys shy away - because no one wants to associate themselves with the word cheap. Bikers, however, won't have any such inhibitions as long as the motorcycle promises to be fun. I also believe that bikers are perennially poor people, because no matter what we ride - from a moped to the sickest two wheels on the planet - our bikes will often make us spend on parts, accessories, gear or simply on leisure rides (which we seem to take more than the car guys). Have you seen that meme that says "Teach your child the love of motorcycles and they will never have money for drugs"? It stems from a similar school of thought. Now, if your parents too raised you to be a biker and you are at that age where you are looking to buy your first big bike - the Trident targets people like you. But does it deliver on all the expectations? Read on to find out. 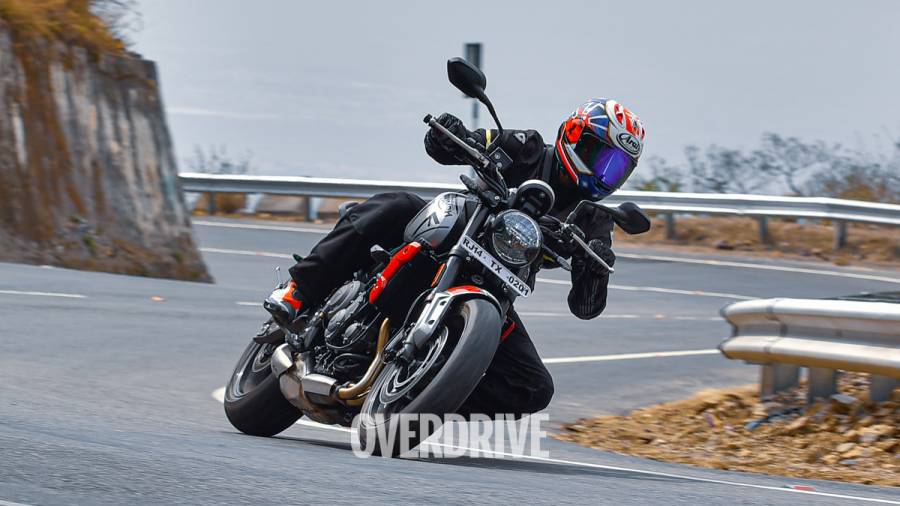 Design and fit
Up until now, your entry point into Triumph were the classics like the Street Twin. The Trident 660 comes in about a lakh cheaper and is a roadster like the Street Triple. It does have some retro cues to it in the round headlamp, rounded tank, relatively slim forks and the edgy master cylinder. It casts a silhouette similar to sporty roadsters from the 90s, but it is tightly packaged and has the lean body structure that the Instagramming Gen-Z are likely to appreciate in today's times. The Trident also silently targets those wanting to upgrade from KTM 250s and 390s and if you are one of those you will realise that it isn't a very small motorcycle and feels a size and half larger than either of the entry-spec Dukes. For average 5'8ers like me, it doesn't feel bulky and overwhelming and will even welcome shorter riders. Its 805mm seat height is easier than it seems because of a narrow profile for the saddle, while a fat cushioning and a wider rear ensure that comfort over long distances isn't compromised for the rider or the pillion. The handlebars are wider than a Street Triple to offer better leverage in city environments, but an early steering lock limits its flexibility for navigating or turning in tight spaces. The handlebars are curved towards the rider, which along with the raised footpegs make for a relaxed yet sporty riding posture. The tank features narrow recesses with plastic inlays, which look unique and provide good traction for the knees under braking or while sport riding. The tank itself feels large enough for that big bike feel, but overall the bike feels small and light in a very Street Triple way. But to mark a clear distinction from its bug-eyed street fighter siblings, the Trident goes with a single, round headlight with horizontally split LED lamps that work well for street use, but are average for the highway. The tail section looks the most modern. It has hints of the Street Triple and the Daytona in its pointy end, but the taillight looks a bit more sophisticated with the little Triumph logo embedded in it. 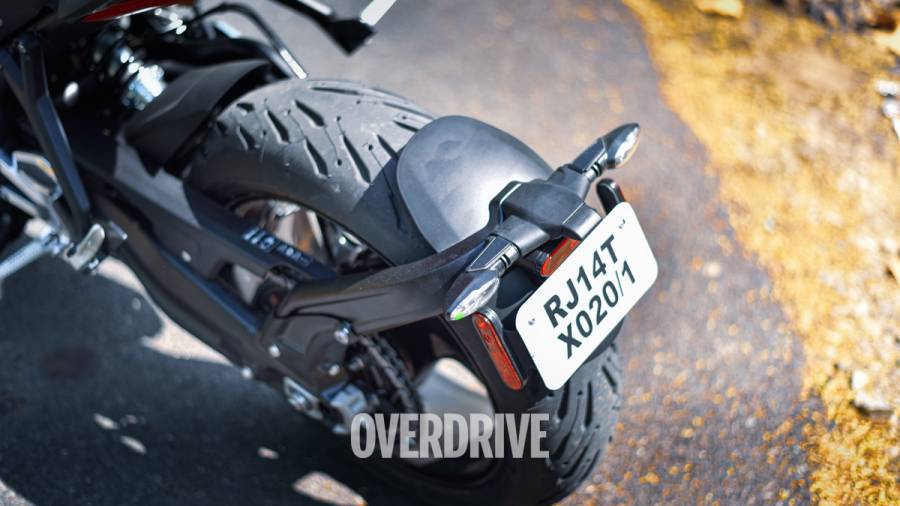 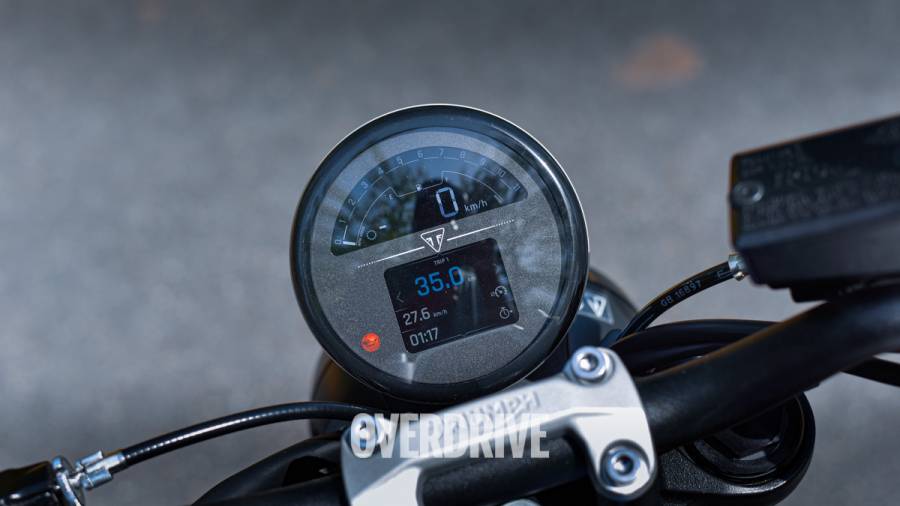 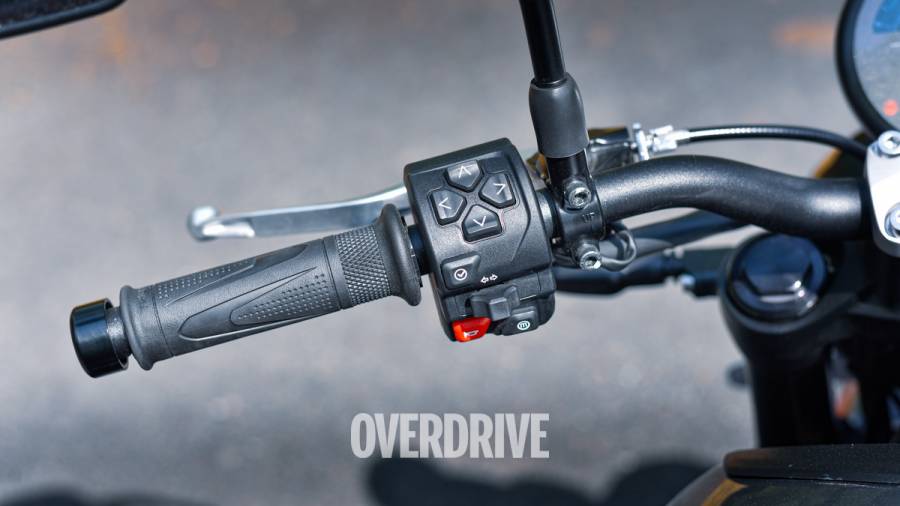 Its touches like these in the tank, handlebars and headlights that take the attention away from some of the relatively cheap bits like the switchgear quality or the entry-spec suspension and brakes, and leave you with a feeling of the Trident being a sophisticated motorcycle - which it largely is. The overall fit and finish are hard to find faults with and generally feels better than the motorcycles you are likely to be upgrading from.

Chassis and suspension
Like a typical roadster, most of the Trident's chassis elements are exposed, but the tight packaging makes sure that nothing looks messy or industrial. The Trident proudly shows off its bespoke steel tubular frame and the swingarm has a conventional straight arm on the left side and gull-arm on the right, which, along with the under-belly exhaust canister that it was designed for, makes the right side the prettiest angle for the Trident. 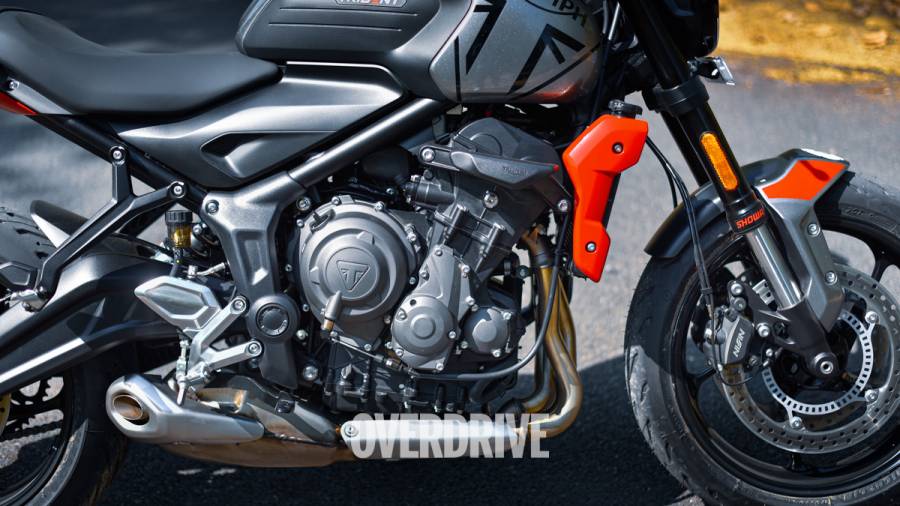 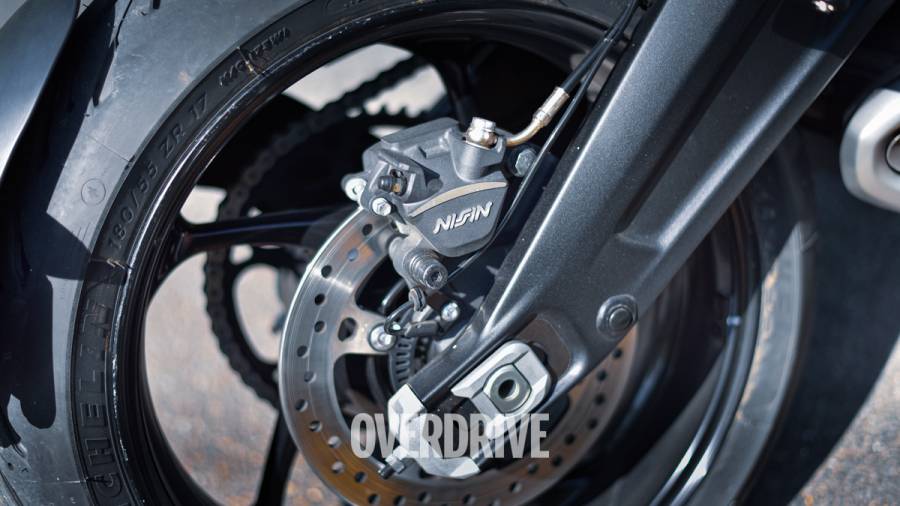 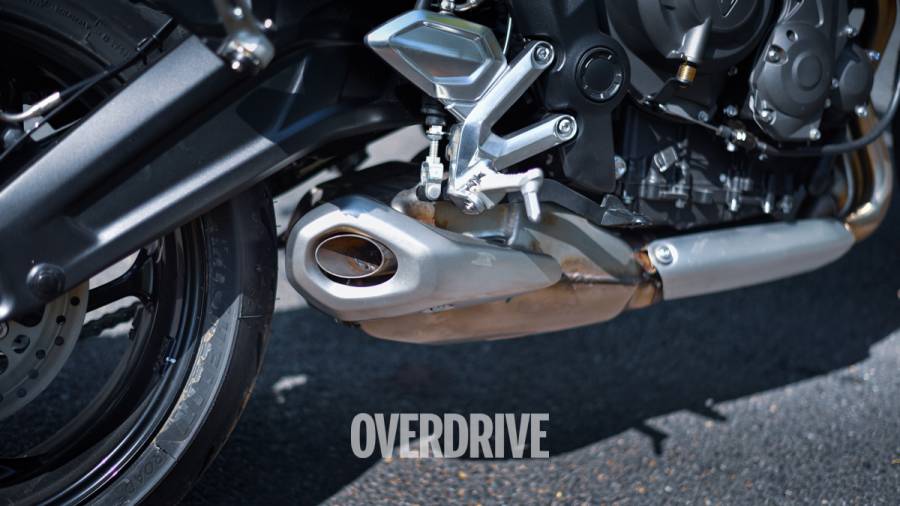 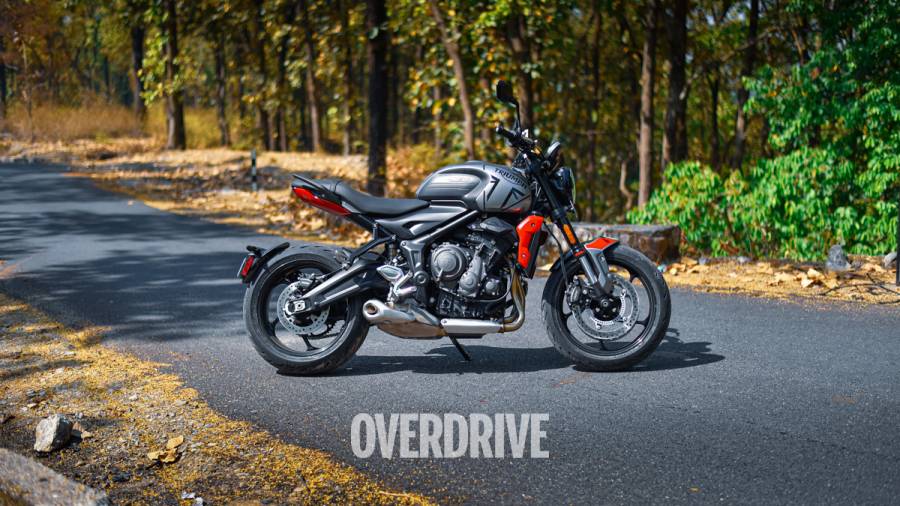 The chassis is suspended by 41mm upside-down forks up front and a pre-load adjustable monoshock at the rear. While these suspension systems from Showa feature at the value end of the inventory list, they do their job rather well. The front and the rear have a harmonious, damped feeling to them (unlike the Z650 which has an awkwardly jumpy rear end), which makes for a supple ride over most kind of undulations that our roads throw at it. 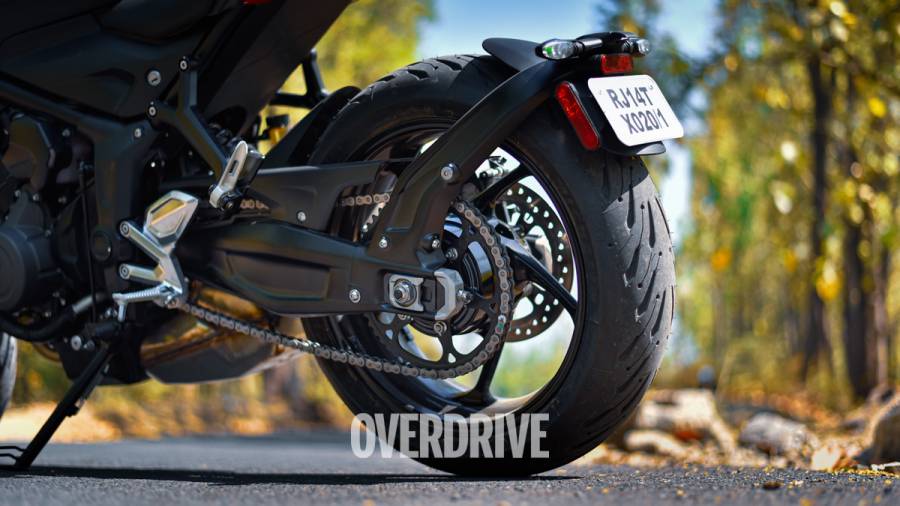 That said, the soft setup tends to dive under braking or squat under hard acceleration. Brake late into speed humps or pot-holes and the Trident's front end bottoms out and you are even likely to scrape the underbelly on the taller humps. In fact, the ground clearance will always be a matter or worry if you don't adjust the pre-load. If you want a motorcycle that will glide over all such road imperfections, an adventure variant of this platform with longer suspension travel is likely to be in the works - but as of now, the Kawasaki Versys 650 or the Honda CB500X would be your only choices in this price bracket. The braking hardware comes from the value crate too - featuring sliding-type Nissin callipers at the front and rear. They worked fine even on a cold start, and for street use and a day-long sport-riding in the mountains, we didn't encounter any fade or a spongy feel to complain about. Should you take this motorcycle to the track though, these brakes are likely to feel inadequate after a few hot laps. 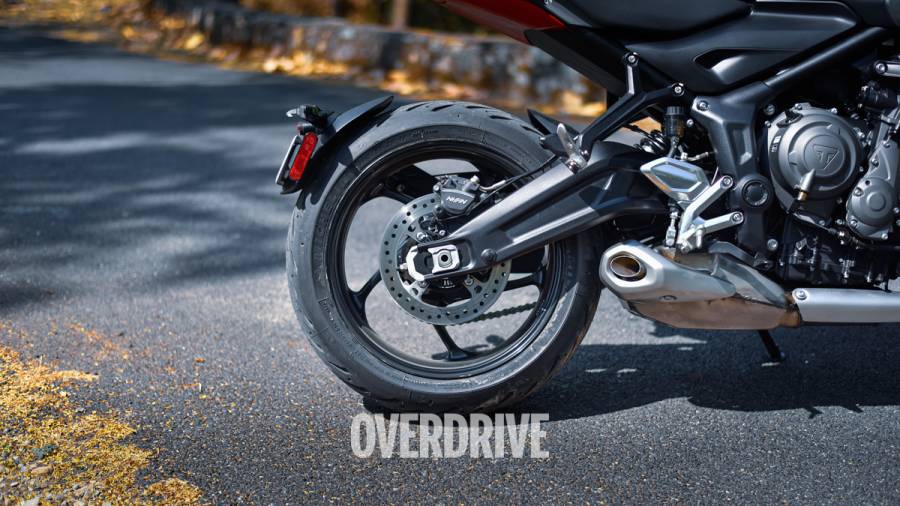 Engine
The engine won't disappoint though, no matter where you are riding. This 660cc mill is derived from the Daytona, but apart from the design and engineering, it has little in common with the legendary 675. Most of its internals including the crank, pistons, pins, head, cams etc. are all new. It runs a shorter bore and a longer stroke than the Daytona, but a larger bore and a shorter stroke than the new Street Triple S 660cc (not sold to us). The engine wakes up with a similar sound profile, and though not as quick-revving as the Daytona, it has the enticing soundtrack of the triple - making it one of the nicest sounding motorcycles under 9 lakh rupees (don't you dare bring up the Benellis). Compared to either of these siblings, it has a different intake system too to achieve that narrow seat and tank geometry, but the intake whine doesn't feel very different than its bolder siblings and onlookers will hear the pleasant whistling sound of a triple. 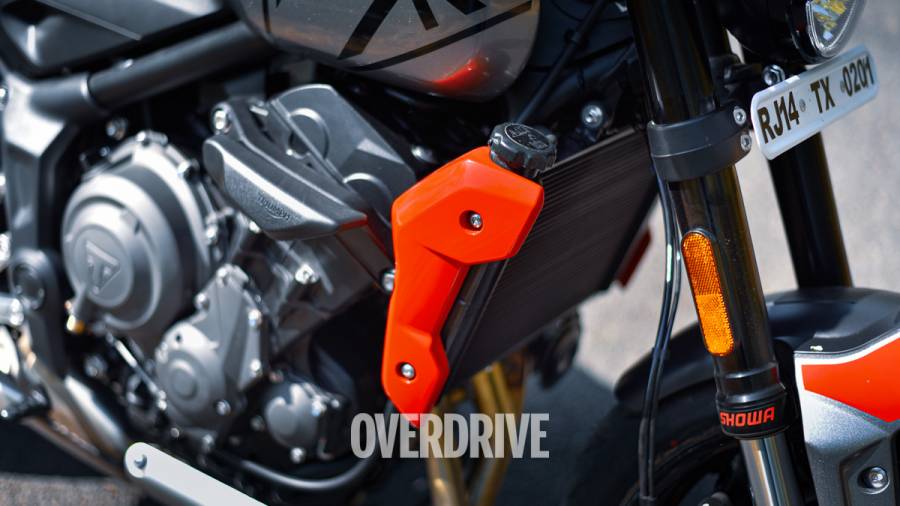 The powertrain also features a slip and assist clutch which makes for a lighter lever feel and there is hardly any hopping under harsh downshifting. The gearbox feels a bit notchy though and I would certainly recommend opting for a bidirectional quick shifter. On a related note, the clutch lever isn't adjustable. This engine also features ride-by-wire which enables two riding modes - a dull Rain and a peppy Road mode - a first for this segment. Apart from the eagerness of the throttle, they also alter the alertness of the always-on ABS and the switchable traction control system. While my ride to the airport was a rainy one, our ride around the inviting mountain roads of Dehradun was thankfully warm and dry. But I'm sure the Rain mode would be just as overcautious as any other Triumph and if you are an old-timer returning to the joy of motorcycles, you are likely to appreciate this basic yet effective safety net. The Road mode is playful, and so are the 81 horses that this engine churns out. Its gearing is short and the acceleration makes it feel quicker than what its specs suggest. Our testing in the mountains (not in our usual test conditions) show a 0-100kmph time of 4.6 seconds. Triumph says the Trident will ride past 200kmph if you so wish, though I believe it will take a while to get there. But the takeaway is that the Trident never really feels underpowered. 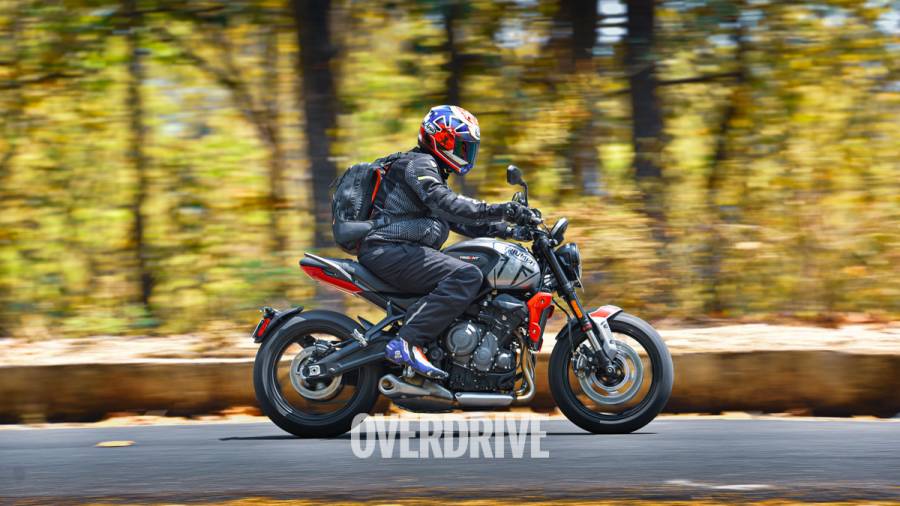 We didn't get a chance to run fuel economy tests but a 250-300km range from its 14l tank seems possible. More on that with a road test.

Handling and rideability
Ride the 600s of the past and you will know how they can get intimidating at times either with their size or with their abrupt power delivery, but the Trident doesn't feel like any of that. Despite the short gearing, the power delivery is smooth and linear and the fuelling feels spot on. The throttle isn't choppy and maintaining a clean line through the corner is never too challenging because the power never feels overwhelming unless you are riding on a death wish. The meat of the power lies between the 3,000-8,000rpm mark, but the short gearing and a healthy spread of torque between the 3,-9,000rpm mark makes the Trident extremely forgiving to wrong gear selection too. You can exit tight corners in fourth if you like or potter around town in fifth at 40-50kmph without any knocking from the engine. The tractability is superb. 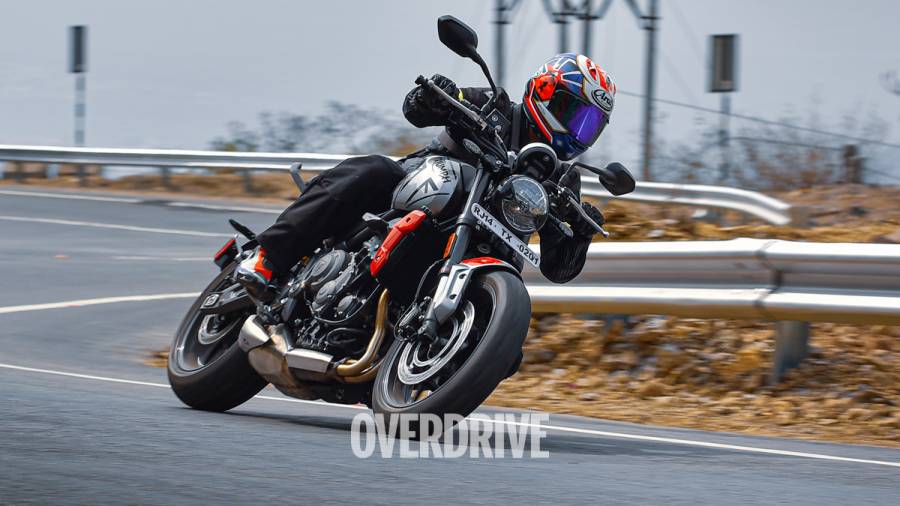 Around bends, it's not as sharp as a supersport or the Street Triple or even the 390 Duke for that matter. That said, the turn-ins feel more gradual than lazy and once you get the hang of it you won't have to hang too much off the bike to arc a clean curve through the bends. Direction changes for switchbacks or highway lanes aren't very lazy either, thanks to its lightweight which makes the Trident pleasantly agile. It feels so light in fact, that it makes a similarly specced Street Triple feel relatively bulky.

The tyres
Part of these handling niceties also come from the Michelin Pilot Road 5 tyres which have impressed us in the past on motorcycles of various shapes and sizes. They are known for their exceptionally good grip and some Street Triple owners who are using these tell us that their tyres have lasted over 10,000kms - which is good news. These will also fare well on the occasional track day but extreme leans may not inspire a lot of confidence. These tyres run the same size and profile as the Daytona, which should make the Daytona owners in India happy because Triumph will officially sell you this road-tyre option now if you are sick of nursing the track-bred Pirelli SC2s on the street. Verdict
This may be the cheapest Triumph on sale, but it never feels cheap in its build, features or performance. In fact, I would recommend this over similarly-priced, pre-owned Street Triples from 5-6 years ago (including the ones that had more than the controversial 69PS output). Triumph also assures a relatively low cost of ownership with a 16,000km long service interval. So all things considered, the Trident is indeed a value package that's worth every penny.

When the Street Twin came out, the motorcycle left me impressed for many reasons, but it never evoked the kind of emotions the Bonneville did for me. Somewhere it felt like a compromise in its size and feel. The Trident doesn't do that. It feels like it is cut from the same fabric as the Street Triple and dyed in the same wool when it comes to the fun quotient. In that sense, it doesn't feel like a compromise - and more importantly, it doesn't feel like an entry-level model either.