Volvo India's electrification plans took a back seat for a few months with the pandemic short-circuiting semiconductor production as well as global supply chains. After announcements made last year, we finally got to sample the XC40 Recharge, Volvo's first BEV for the Indian market. Built on the CMA (Common Modular Architecture) platform, the XC40 Recharge is an extension of the ICE-powered SUV, so it isn't an all-new designed from the ground-up electric SUV. Like Polestar, Recharge is a division within Volvo that is leading the electrification journey for the brand. That the XC40 Recharge is built on an inherently ICE platform, takes nothing away from the XC40 as it simply replaces one powertrain for another. Nonetheless replacing the engine and fuel tank with two electric motors and a battery pack does bring about several changes to the way the SUV behaves, its character, performance and usability. 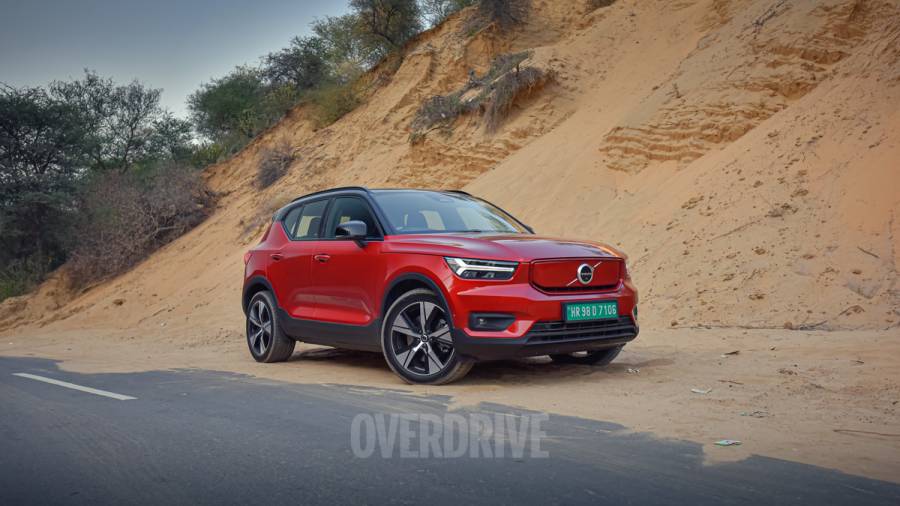 First, there's the design. At the front end the grille is entirely new, with no need for intakes, Ian Kettle who designed the XC40 and then moved to Tesla, gave it a flourish by closing up the gaps with a sheet panel and placing the logo dead centre as tradition dictates. That simple change grabs enough eyeballs. The front face, the 19-inch alloy wheels, the word Recharge embossed across the C-pillar and the badges on the tailgate are the only giveaways that there is more than what meets the eye. The XC40 to begin with was a handsome design, much appreciated for extending its Scandinavian roots by emphasising geometric shapes and lines. The Recharge does not mince that language, though to my sensibilities, that new grille does diminish its appeal. 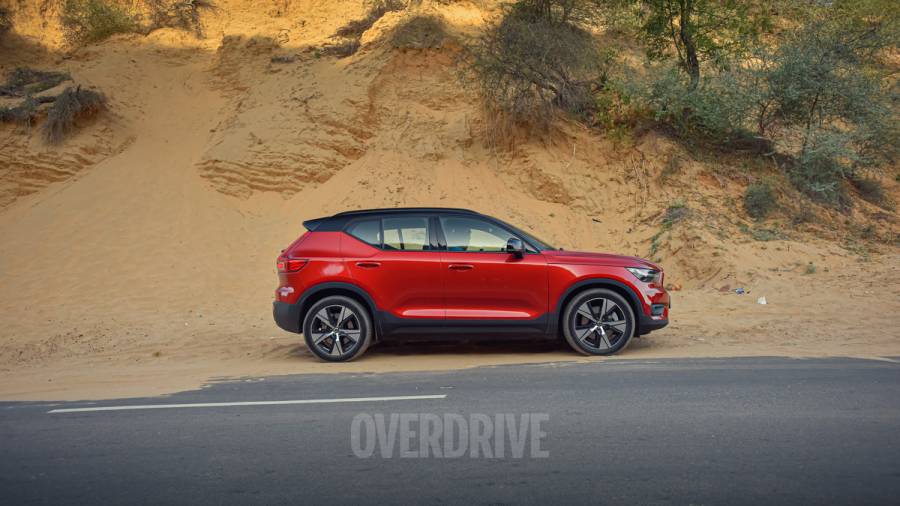 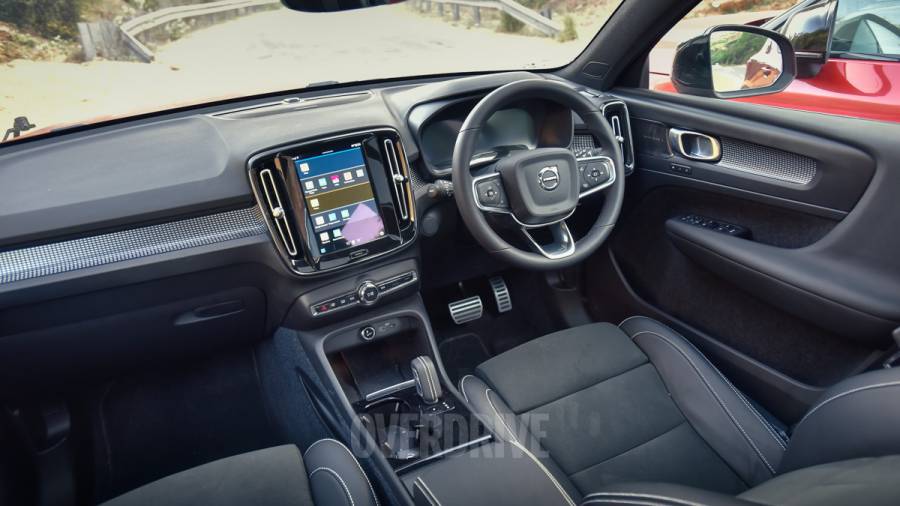 The XC40 Recharge sits on the same chassis, however, the length has increased by almost 15mm to 4440mm to accommodate the battery pack that sits beneath the floor pan. Height, track and width stay the same. Move within and you're greeted by a simple and spartan cabin whose headlining feature happens to be that 12.3" touchscreen in the centre of the dashboard enveloping a second-generation user interface. The textures, materials and finish across the cabin is top-notch, and though the version we drove came with leather seats, the cars that will eventually be delivered to customers will feature recycled fabric upholstery in an effort to enhance the XC40 Recharge's sustainable footprint. Volvo will offer just one variant of the XC40 Recharge with perhaps two interior colour trims and as is de riguer for Volvo India it would be fully loaded. 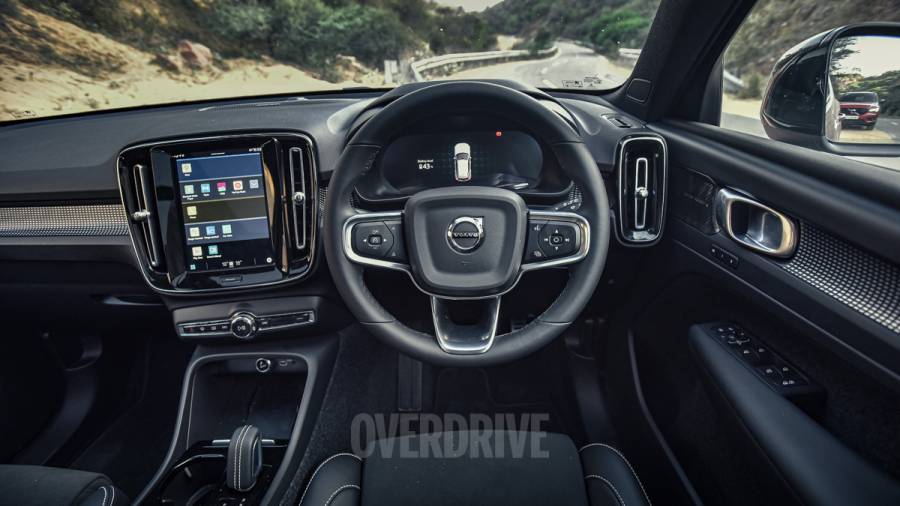 Distinguishing the XC40 Recharge from its ICE counterpart are a few exclusive features. You get true keyless ignition, there isn't even a button to thumb the electric motor to life. Sensors placed in the seat, detect the presence of the driver when seated and automatically bring the electric motor to life. Similarly, you don't need to switch off the motor, simply pressing down on the park button and exiting the vehicle shuts down the motors. You can also engage and disengage the motor via a control on the touchscreen menus which is kind of a hard boot down the switching of the vehicle entirely. 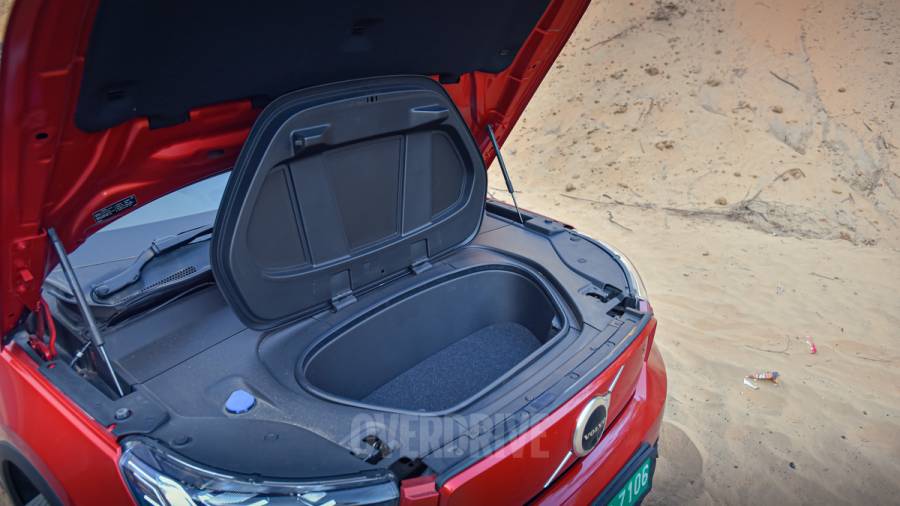 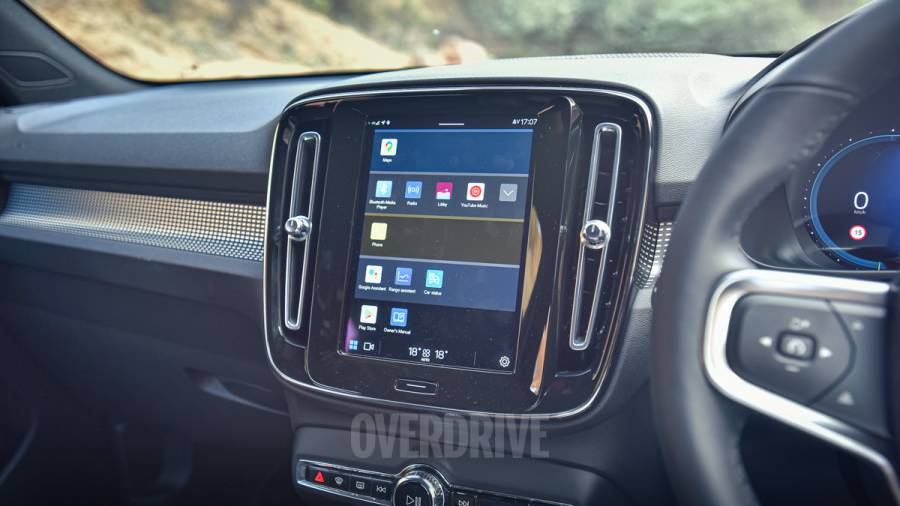 You get a 31-litre storage bin under the front hood where the internal combustion engine resides and the boot volume is in excess of 430-litres. There are additional storage areas within the cabin though the door pockets are too narrow to accommodate anything more than a 350ml bottle. The XC40 also comes powered by Google, so you sign in to your Google account via the touchscreen and the systems setups everything else for you including your Spotify faves. There is another tab on the home screen called the Range Assistant, it allows you to access vital information on available range and charge consumption, as well as showing you the energy consumption by the steering system, your driving style and the performance of the motors. It also has a range optimisation feature accessed through the Range Assistant menu which shuts down some of the climate control functions if the battery charge drops too low. 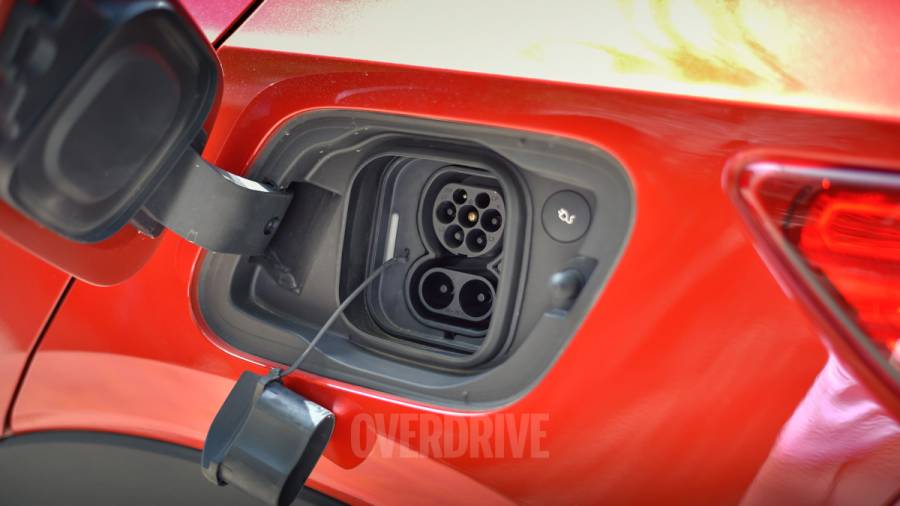 The Volvo XC40 Recharge has a 78-kilowatt hour battery pack made of 78 modules of 12 lithium-ion cells in a 3-parallel stack configuration. This energises two water-cooled 150kW electric motors, one for each axle, lending the XC40 Recharge with a permanent all-wheel drive. Each motor outputs 204 horsepower amounting to a total 408PS of peak power with 660Nm of peak torque. That is an impressive amount of motive force, for a vehicle that's no larger than an XUV700, so you can expect some fireworks!

Analog Devices Inc., provides the battery management system and its algorithms too are quite impressive. You can hit the ton in 4.7 seconds, but if driven sensibly, you can also stretch the range well over 350kms in everyday conditions (WLTP cycles place range at 418km). 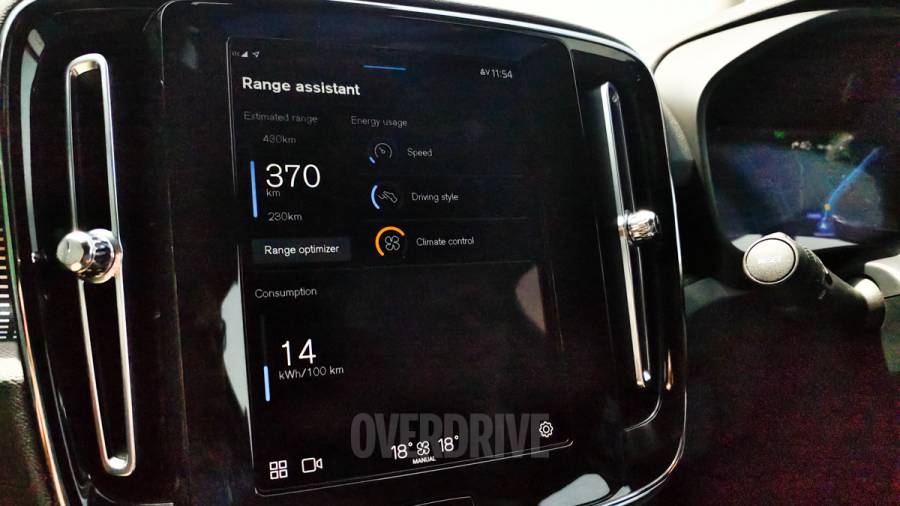 Volvo will provide a 11kW onboard charger to be used on a AC wall box charger, and the XC40 Recharge can accept up to a 150kW DC fast charger which allows the battery to juice up to 80 per cent charge in just 40 minutes.

The battery pack like in any EV is a heavy one, adding almost 500 kilos over the standard ICE-powered XC40. This brings the total weight of the XC40 Recharge to 2200kgs making it fairly heavy. 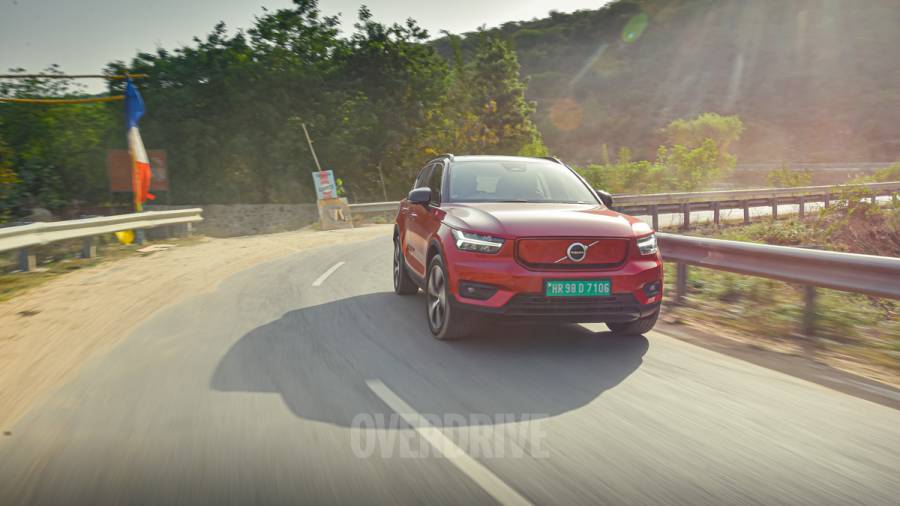 First things first the AWD configuration gives it very sharp dynamic abilities, though with 660Nm of torques available throughout the electric motors rev range things can get a bit iffy if you give it the beans at lower speeds around a corner. On greasy, slippery surfaces you best keep your right foot in check. The 4.7-second jolt to a 100kmph is exciting, but you can also expect to see range depleting quite rapidly if you keep that sort of performance going on for long. 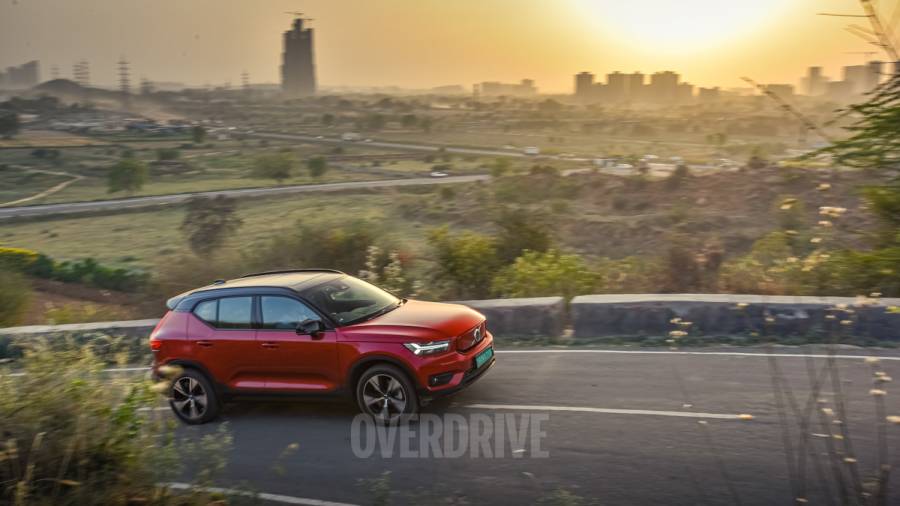 The XC40 Recharge has no drive modes unlike what you see in the Audi e-tron range, but for a compact urban SUV you don't really need it. The range of performance is impressive, a quick jab on the throttle pedal give you instantaneous acceleration, but ease back and it drives effortlessly in urban conditions. The steering is light, and you have the control to change the effort required. You can also select the one-pedal drive mode, where the recuperative braking comes into effect. There is just one default mode for this, you can't select multiple levels of regeneration. Once activated though the braking sensation is quite aggressive and you have to learn to fettle the throttle pedal to get the best out of the one pedal effect. It's a tedious process if you ask me, and there is a steep learning curve to using this feature optimally. It also works better in urban conditions at slower speeds, but out on the highway where average speeds are higher, and you have to brake quicker, the retardation effect the second you get off the accelerator pedal is harsh. Volvo should have provided a two-step regenerative process which would have made drivability smoother. The XC40 also does not recharge during coasting which is a miss. 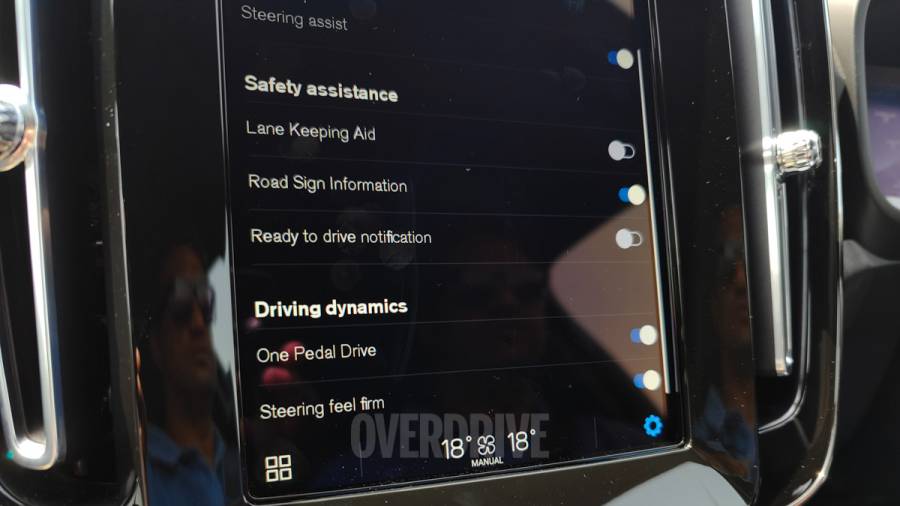 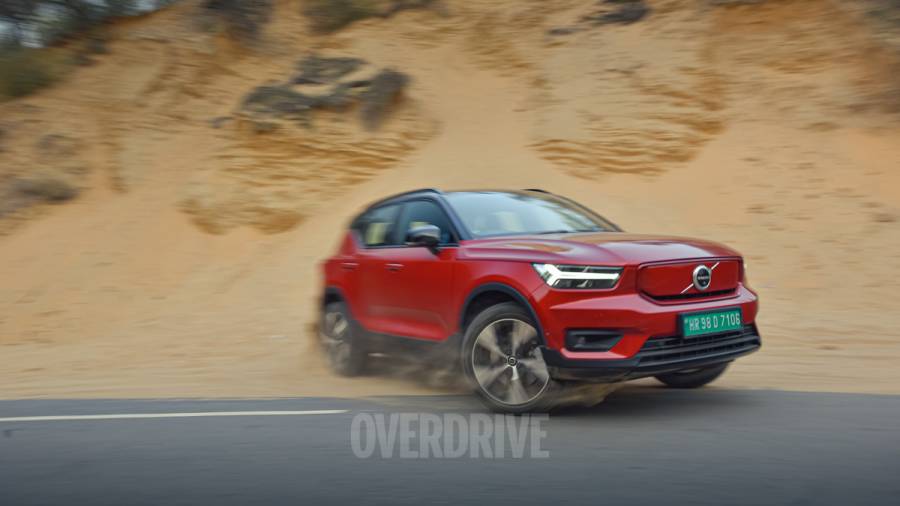 The XC40 Recharge is brilliant when it comes to straight line performance, the full 660Nm of torque is available at any speed which makes overtaking all traffic a very quick and effortless action. All the stability, traction and other safety features in addition to a 50:50 torque split are always switched on in any Volvo, there is no switching it off, this means you get zero wheel spin. That said there are instances when you can feel a hint of understeer and the front wheel scrabbling for grip in tighter corners. 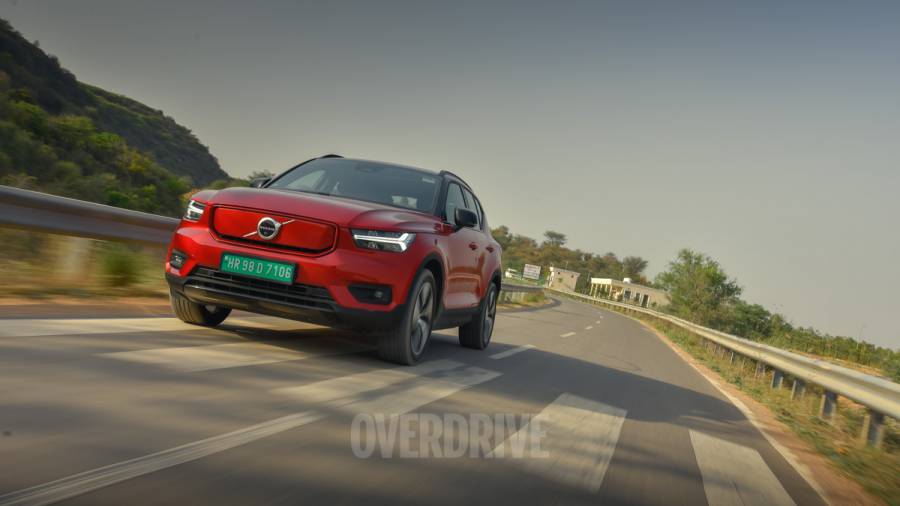 The McPherson setup at the front end and the multi-link rear do provide very good dynamics, with the 19" 245/45 PZero's adding a solid layer of adhesion. That said, the ride quality is typically European, its hard all the time, much more severe than what you get in contemporary BMW's and Mercs, to the point where I expect you'd hear a rattle or two creep in to the cabin in a short time. This rigidity was further exacerbated on the Gurgaon Jaipur highway which is heavily rutted and scarred making the harshness all the more evident. 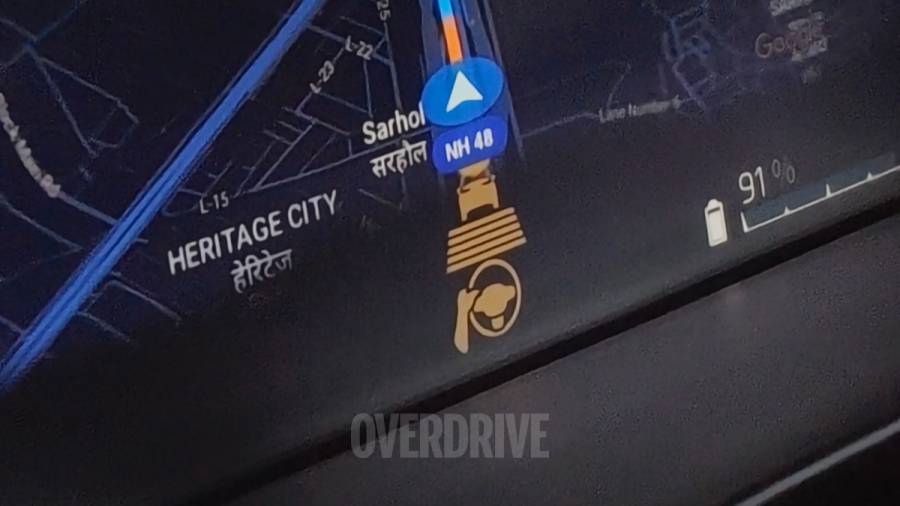 In a Volvo, for the last several decades, occupant and pedestrian safety has been a guiding principle. You get the full complement of safety features, including multiple airbags, ESP, downhill descent, traction control, ESC, ABS, etc. In the XC40 Recharge you also get advanced driver assistance systems, a first on any Volvo, that allows the vehicle to intervene should you fail to act as quickly. Set off the adaptive cruise control and the XC40 Recharge will literally drive itself forward, switch on lane keep assist and you have a car that will control both forward and side to side (provided you have lane markings) momentum without the driver having to intervene. It works brilliantly, I tried it out on the busy Jaipur highway and its effortless at cruising speeds. You just have to be wary of other road users who consistently make an attempt to wedge themselves in between the large gap between the XC40 Recharge and the vehicle ahead. On the battery front, it's been encased in an extruded aluminium cage and placed in the middle of the car's body structure creating a crumple zone around it. The XC40 Recharge also has a 178mm of ground clearance while the low positioning of the battery pack also ensures a lower centre of gravity compared to the standard XC40. This provides it with better stability and fewer chances of a rollover. It must all work, I wasn't one to test it, but rest assured both active and passive safety features are abundant and as state of the art as it gets. 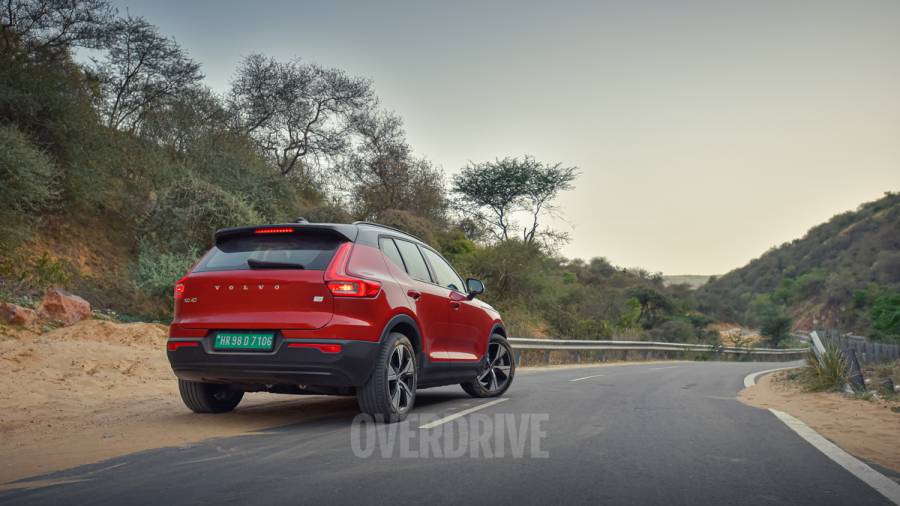 The XC40 Recharge works well as an EV, its most impressive aspect being its range. For a car that resides in the compact SUV segment, the 78kWh battery pack with a real-world range in excess of 350kms works very well indeed. There is the question of price, but Volvo India has shown quite clearly with its past portfolio that it is willing to overlook premium pricing. This should place the XC40 Recharge in a very good position when Volvo launches the car early in the second half of 2022. Volvo also indicated that they aren't as dependent on the local charging infrastructure, and they may have a tie-in to fulfil home charging requirements via a Type 2 AC charging unit. Overall then, the XC40 Recharge is a good start to Volvo's electrification journey in India, adding one more EV to the growing pile.

Prices for the Volvo XC40 Recharge are estimated to start from Rs 75 lakh.

Watch our video review of the 2022 Volvo XC40 Recharge below,