The French take their fashion rather seriously and since designs can mean different things to different people, bold designs originating from France might often seem quirky to the rest of the world. And yet the French decidedly make their cars look 'different' and at least when it comes to Citroën, I'm glad they do. Their C3 arguably started this trend of having DRLs in the brow and placing the headlights in the bumper, and mostly everyone who has followed hasn't quite achieved the finesse that Citroën has, with this arrangement. Citroën's flagship, the C5 Aircross, is the best representation of this design yet, and it is the car that will establish the brand in India from 2020. 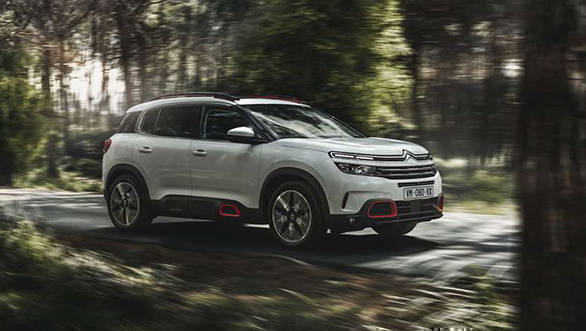 The A, B and the C pillar are gloss black which gives the floating roof effect

While one of the most popular, and arguably French SUV in India - the Duster - is inspired by a rough and tough hiking boot, the C5 Aircross seems to draw design cues from sports shoes. It's athletic in its colour choices, and the signature air-bumps on its sides are pretty much like the colourful air cells that attract teenagers to running shoes. Just that Citroën's air-bumps aren't as loud, but some of the accents on the car, certainly are. These contrasting panels are customisable too and will be a big part of the Citroën buying experience in India.
The country of origin and shoe inspirations are the only common laces that tie the Duster and the C5 together. Otherwise, the C5 Aircross is a size larger and competes with the likes of the CR-V and the Tiguan in its footprint.

Citroën's aim with the C5 Aircross was to bring a distinctive design and unparalleled comfort to this class and they have clearly achieved the design part of it quite well. As for the comfort - they have gone about it two ways - the suspension and the seating. 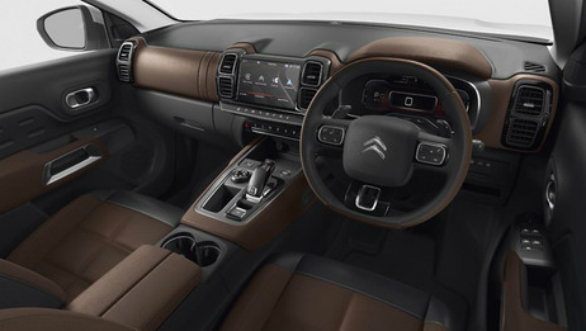 The seating shows off all the learnings that Citroën has gathered from its parent PSA's MPV expertise. If there is anything the French love as much as their fashion, it's MPVs. I'm exaggerating of course, but then, that's all the French that I can speak. With those MPV learnings, Citroën has put three similarly sized seats in the second row and all three can be adjusted individually for reach and recline. That not only ensures optimum and equal comfort for all rear-seat passengers, it also adds a higher degree of versatility in the cabin. It will be a standout feature for the C5 when it arrives in India. Furthermore, all the seats have large squared pads on all touchpoints. At first, it looks like upholstery designed to match the geometric theme of this car, but the function of these soft pads is to enhance cushion comfort over long distances. If you and I agree that 350km in half a day is long enough, then I can tell you that Citroën isn't bluffing with this. 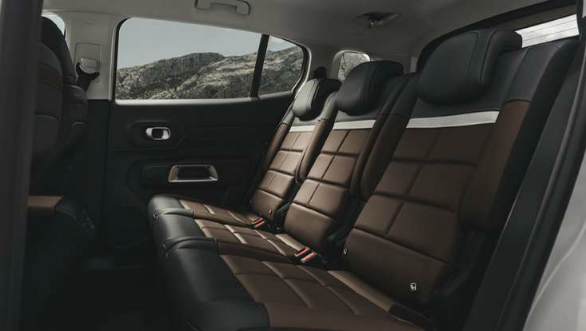 I find the second row to be a bit tight though, with my knees touching a fully retracted driver's seat, or leaving only an inch of give with the seat set to my driving preference. The headroom is decent though and shoulder room is plenty. The seats at the front are roomier still and the headrests can also be adjustable for reach, much like the premium cars. Interestingly, Citroën has not only added Isofix anchorages to the outer rear seats but also on the front passenger seat - a great feature if you have to travel alone with a toddler. Visibility from all the windows is excellent and a wide panoramic roof adds a feeling of openness in here. The roller blind for it is a bit flimsy though, and India could do with a piece of thicker fabric to counter the heat.

The dashboard is done up in a grid-like layout that is also seen in the rest of the C5's design. The most interesting is the design of the AC vents, which are essentially four large vertical vents that are split visually to appear like eight vents - just that they aren't. It's a bit of a lost opportunity, I think. Had Citroën simply added individual fin control for the top and bottom halves of each vent, these could actually function like eight vents and add an even greater degree of versatility and cooling efficiency. Do it maybe for the hot conditions of India, Citroën? 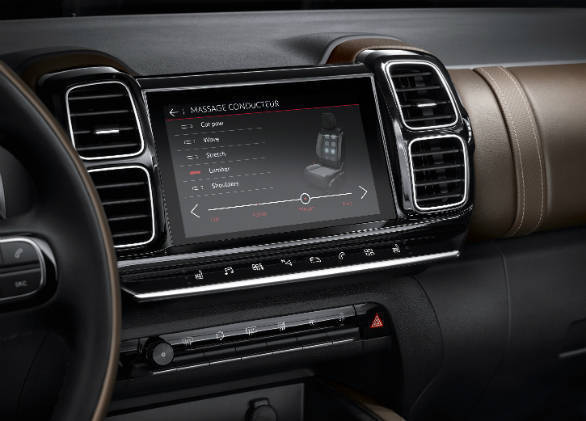 Drawing most attention in the dashboard grid is the 8-inch infotainment system. Its multi-layered menu needs getting used to, but like me, you too will most likely not need to use much of it since it supports all popular smartphone interfaces - Apple CarPlay, Android Auto and MirrorLink. The display quality is on par with the CR-V's and the touchscreen sometimes takes a second try. The French car we drove in Paris also came with connected tech, an embedded SIM with WiFi hotspot capability and SOS/RSA hotkeys for emergency assistance. 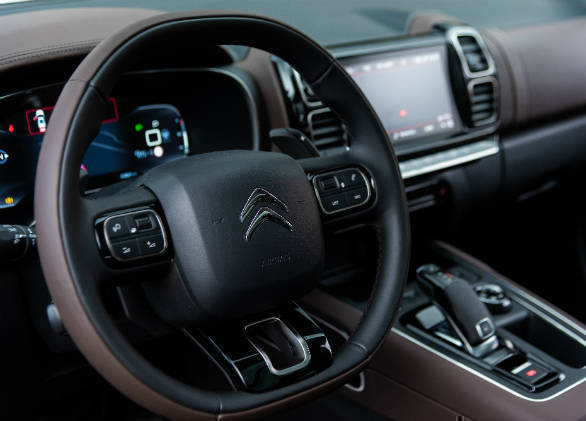 Complementing the infotainment is a 12.3-inch digital instrumentation and I quite like the layout and level of customisability it offers. Designers of instrumentation UI are usually known to go berserk when presented with an empty canvas of this size, but Citroën has played it wisely. There are multiple presets to choose - from a driver-focussed display that shows everything from the tachometer and trip data to animations for the assists, or a plain and minimalist layout that only shows the basics like speed and fuel level. My pop would love the latter if he was driving one of these. 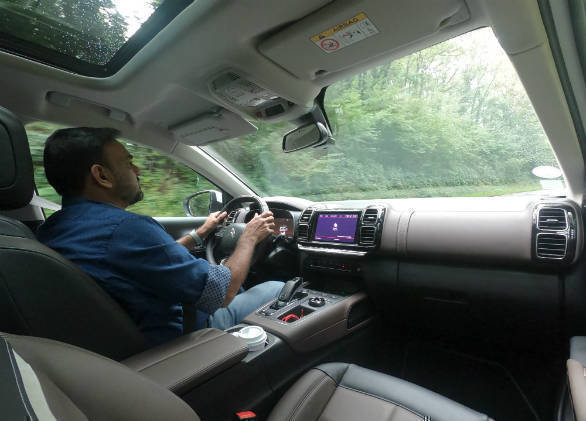 Speaking of driving, the C5 Aircross has an option of two petrols and three diesels in the European market. All the five engines are Euro 6.2 compliant, and we reckon that they won't need much modification for BSVI compliance, if Citroën were to bring either of them to India. A PHEV option is also going to join the line-up soon and could be considered for India, going forward. There is a lot of speculation on whether or not Citroën will bring a diesel to India, but there is word that a new 1.5-litre petrol will be assembled locally, and the upcoming motor has already achieved a high degree of localisation for the Indian market. Turbocharged small capacity engines are gaining popularity in India, and the 1.6-litre petrol that the 1.5-litre unit will be based on, certainly has the numbers to draw attention - 180PS and 250Nm! Good news is, the C5 also feels like a 180PS car. 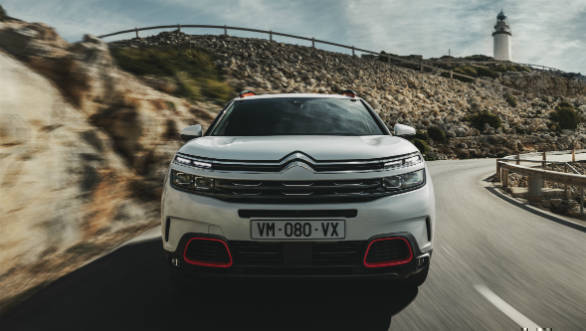 It builds pace quickly and yet the engine is very tractable in the city without any annoying turbo lag or sudden power surge. It features drive by wire and the throttle feels quite light at city speeds, almost feather-touch sensitive at times (okay, I'm exaggerating again) and if you are coasting at highway speeds and get back on the power, it takes a moment to respond to the throttle input. It is just a matter of getting used to, though. The engine is extremely refined and you hardly hear it even past the 4,000rpm mark. It is complemented by equally good insulation of road and wind noises, keeping this cabin pretty silent even at highway speeds. In that sense, it feels quite premium than what it is. 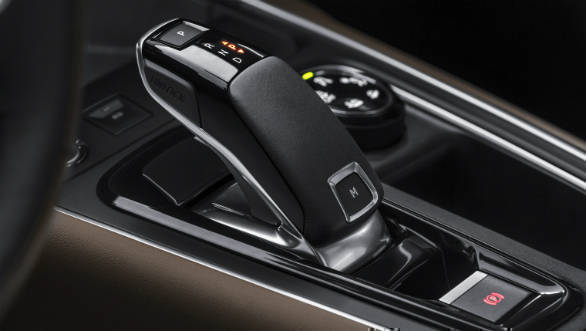 The engine is mated to what Citroën likes to call the EAT8 gearbox - Efficient Automatic Transmission 8-speed - a fancy-sounding yet an apt name for the efficient 8-speed AISIN AWF8F gearbox that also does duty in the BMW X1. This gearbox is quick to downshift, so pulling overtakes even at highway speeds is quick, but upshifts do take a moment to materialise at part throttle inputs. The gearbox is compact and designed for transversely mounted engines, thus feeding the output of this 1.6-litre engine to a front-wheel-drive system. 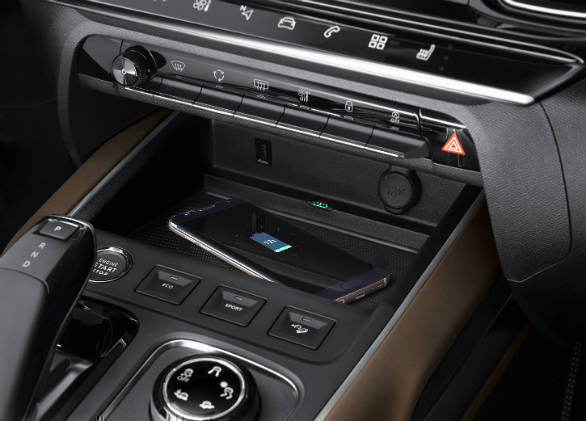 The C5 Aircross doesn't get an AWD, but for going off the beaten path, there is 230mm of ground clearance and an ESP-derived terrain mode selector much like the Harrier and the Seltos. The weather in Paris wasn't very kind to us with heavy showers all along. But the ESP worked well on most occasions and the All-road mode did a fine job on a wet trail I drove on.

The C5 Aircross has earned itself a five star Euro-NCAP rating in the safety department and features assists like active lane-keep, adaptive cruise control, automated braking and fatigue warning. Interestingly, there is also an integrated forward-facing dash-cam mounted in the rear view mirror assembly. It can record video to an SD card or transmit data to a smartphone and I believe it's a good piece of kit to have. 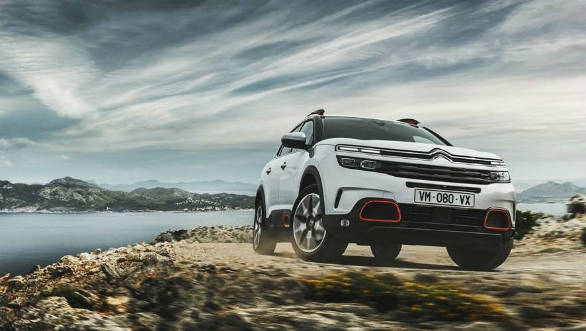 Finally, we come to the suspension - one of the big talking points for the C5 Aircross. It employs in its suspension what Citroën likes to call Progressive Hydraulic Cushions. It offers one of the cushiest ride that I have experienced in a car of this class. Through small potholes, it almost feels like the wheel is extending itself into the undulation and not carrying that corner of the car down with it. And on the sharper bumps and joints, you hear a light thud, but it doesn't unsettle the car or give you a jolt. It is the kind of ride quality you otherwise get in cars a few segments higher.
To achieve this, Citroën has added two hydraulic stops - one for rebound and one for compression - which unlike mechanical bump stops, are better at reducing rebound and flattening the sharper shocks. They work with the conventional springs and shock absorbers to gradually slow down the movement of the suspension to iron out any jolts or discomforting rebound. 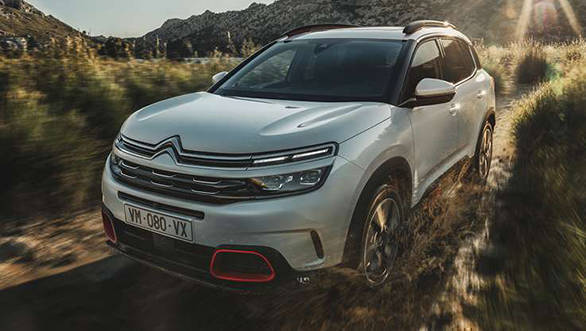 On the flip side, the C5 Aircross feels quite squishy around bends and switchbacks and there is a fair bit of vertical movement. You will notice a pronounced dive under braking or at turn-ins, but the hydraulic cushions ensure that the C5 doesn't feel wallowy and the body roll is well-controlled. There is plenty of grip from the tyres, the electronic nannies work well, the steering has decent feedback and the brakes feel progressive and predictable - so things never really get hairy despite the car not feeling as taut as a Compass or a Tiguan. 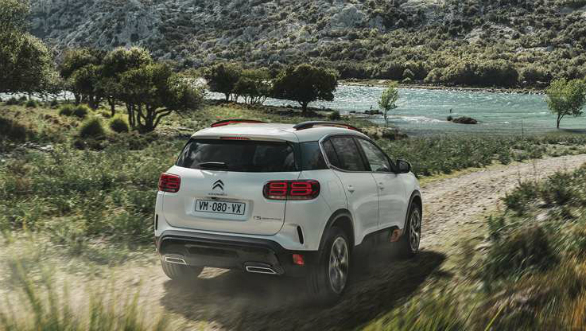 Soft, is the key word for this car - both, in terms of its suspension behaviour and the comfort of the cabin. And all said and done, that cushy feeling is what many look for in this class. Then there is the (customisable) design flair of the C5 Aircross, which is hard to ignore. Add to it a kit brimming with features like connected technologies, digital displays, and advanced safety technologies, and you have a car in the C5 that is hard to find faults with. It is a befitting car to bear the flag for the brand and if they spec it just as well for the Indian market and at a sub-Compass price tag, Citroën will be another new brand to disrupt the Indian market.