It's been at least a week building up to this moment, but is it really happening? How have I found myself at the wheel of the fastest, most capable car to bear the Mercedes, or more fearfully, the AMG name? Even more astonishingly, who would have thought that I'd be coming off my COVID-19-induced driving lull in such an explosive manner? 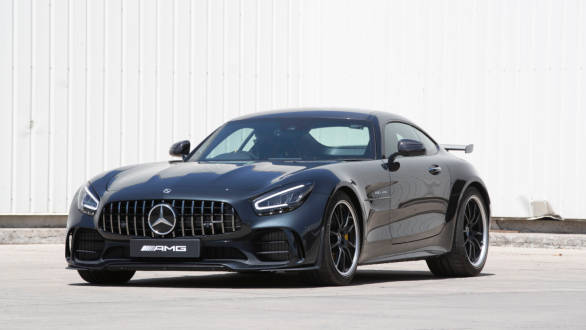 Speaking of explosions, these musings about my luck are at a far corner of my mind. No one ever told me that driving a supercar for the first time, the overriding emotion would be one of terror. Seeing the Mercedes-AMG GT R in the flesh for the first time doesn't do a whole lot to assuage these fears. It sits low and wide on the road, as is wont of a supercar. This is even more true with the GT R, which is wider by 46mm at the front and by 57mm at the rear over the standard GT. But what truly grabs attention is the profile. The front-mid engined layout gives it some striking proportions, with the long bonnet morphing into the passenger compartment and then into a sharply falling, almost fastback roofline. This general shape is then draped in bodywork that has an almost organic edge to it, a theme that works very well with the Magnetite Black paint on this car. As always, the Panamerica grille dominates the AMG's face, as do the large, functional heat exchangers and cooling panes in the bumper. With this update, the big change is the new headlight design, which now follows the latest Mercedes design philosophy and is set in a dark background. At the rear, the three-part titanium exhaust is integrated into the quite serious-looking rear diffuser and the manually adjustable spoiler. All these aero bits on the GT R are functional and AMG claims these components have added 155kg of downforce over the standard GT. These aero components also channel airflow through and around the car to improve cooling and reduce drag. There's even an underbody carbon element that deploys at 80kmph to considerably reduce front-axle lift at high speeds. 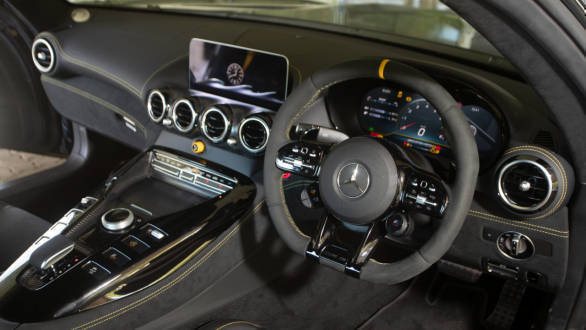 Even once inside the GT R, all of this motorsport-honed wizardry doesn't seem distant. You enter over a high sill and sit low and cosy with your surroundings. Sure, the interiors follow the exaggerated aggression of the GT R's exterior but everything falls to hand easily. There have been no real sacrifices for the sake of performance either. There are heated and power-adjustable seats, dual-zone climate control, Mercedes me connect features and the high-end Burmester audio system. The highlight is the centre console, which sweeps down from the dash with the buttons mirroring the layout of the 4-litre V8 under the hood. 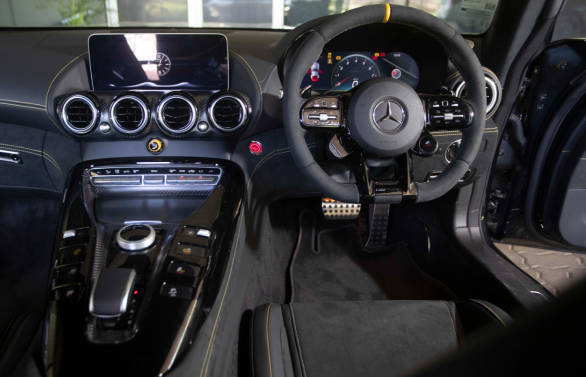 For this update, the GT R adds the latest digital instrumentation seen elsewhere in the Mercedes line-up, although there are AMG-specific graphics and track telemetry functions. There's also a new AMG steering wheel trimmed in Alcantara, with the drive mode controls mounted directly on the wheel now. As seen on the GT 4-door, the rotary knobs come with neat colour display screens, and replace the buttons which used to be on the centre console. Our test car added the quite supportive AMG performance seats with the contrasting seatbelts. 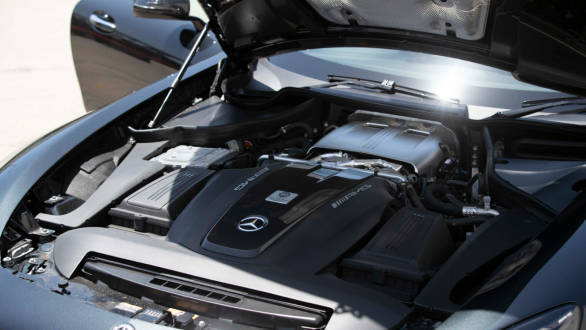 By now, having taken in all of this, I'm starting to become a bit more confident. The anxiousness has given way to excitement, although the thought of wrapping four crores of metal around a tree is still omnipresent. But all of this fades into the background as soon as I thumb the starter button. There's a deep shrill from the engine and the GT R settles into a bassy burble from its bespoke titanium exhaust. The 4-litre twin-turbo V8, handbuilt in Affalterbach, has been left untouched in this update. It continues to make 585PS and 700 Nm, the gains over the other GT models coming by way of new turbochargers, reworked wastegates and sharper tuning.

In the kind of largely slow-speed, urban driving that I put the AMG through, the dominating sensation comes from the ever-changing bellows and snarls of this motor. Surprisingly, there's a veneer of docility as you set off, the boosted engine needs a split second before it unleashes its significant grunt. But past that, even a slightly heavy dab of the right foot will have the GT R hanging out its tail. Here power delivery is immediate, helped along by the AMG-specific 7-speed DCT fitted to the rear axle. This connects to the engine via a carbon driveshaft. 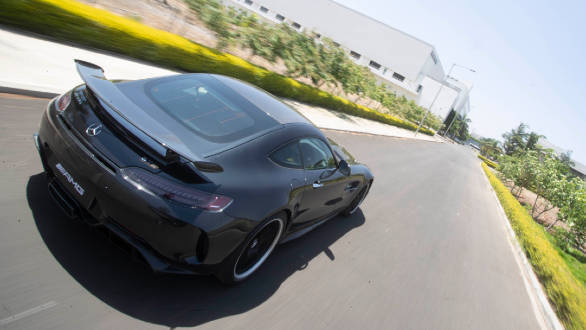 The hardware leaves me no reason to doubt the 318kmph top speed and the 3.6s 0 to 100kmph sprint that Mercedes claims. While you will invariably chase down these numbers, you'll find that another great bit about the GT R is its steering. It's a variable-ratio setup that seems quick but never feels oversensitive. There's also a very natural heft and fluidity to it that adds more precision. But the bigger game-changer is the rear-axle steering system. This turns the rear wheels in the opposite direction to the front wheels below 100kmph, and then in the same direction over 100kmph. This effectively makes the GT R more agile around low-speed corners and more stable around faster ones. At low speeds, it feels like you are driving a car smaller than it actually is.

This is only the tip of the technological iceberg that is the GT R. AMG has thrown every possible bit of go-faster tech at its performance flagship, but to its credit, this never makes the experience artificial. There's the adaptive suspension, with a new Slippery mode apart from the Comfort, Sport/Sport+ and Race. Aside from which, drivers can choose to configure everything from the engine response, and steering to the gearbox. There's also the motorsport-style 9-step traction control system. This lets drivers pre-select the grip levels between the two rear wheels, right from what's best for wet conditions to one with minimal intervention. 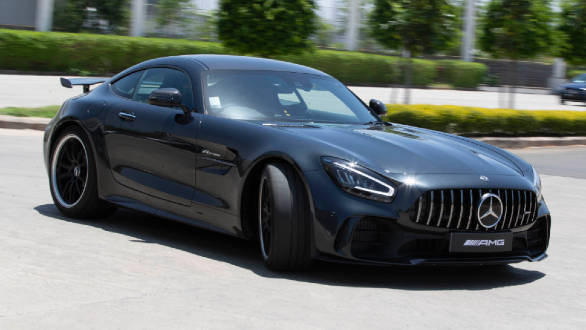 The 2020 GT R adds even more control, with AMG Dynamics. This system uses the speed of the car and the steering angle, or yaw rate, to detect what the driver is about to do next. It then manages the power and grip levels accordingly. The aim, AMG says, is to make you go faster in a completely natural way.

Tying all of this together is a structure made of sections in aluminium, steel, carbon and magnesium. This keeps kerb weight down to 1,555kg and more importantly manages a 47:53 weight distribution. The carbon-ceramic brake rotors are another bespoke touch. In practice, they feel progressive, strong and with almost no slack. 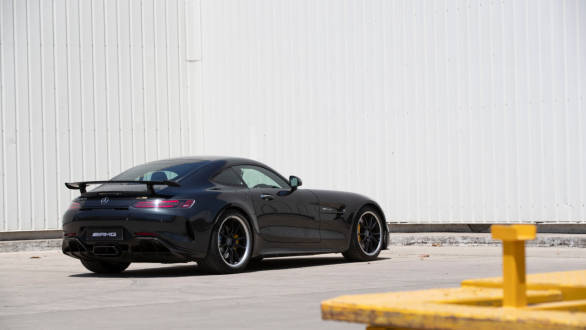 With the Mercedes-AMG GT R, it's difficult to look past the deep motorsport connection it wears on its sleeve. The Nurburgring lap time promotions may seem a bit brazen, but they're not overselling anything. The AMG GT R will be a difficult machine to master, but in my short time with it, it also seemed to be a very good teacher. Try anything beyond your skill and it will spit you out. But work with it long enough and it'll probably bring out the pro-driver hidden inside you easier than anything else.

Now I'm not equipped to tell you if the Mercedes-AMG GT R is the best way to spend your supercar budget. But as I finish writing this several days after I drove it, every sound and interaction from that experience is still clear as day, the initial fear long since forgotten.