The 2021 Audi RS 3, which recently debuted globally, has now become the fastest car to go around the Nurburgring in the compact class. With a time of 7m 40.748s, the RS 3 Sedan beat the previous record held by the Renault Megane RS Trophy R by 4.64s. The record-breaking sports sedan was being driven by Audi Sport racing and development driver Frank Stippler. 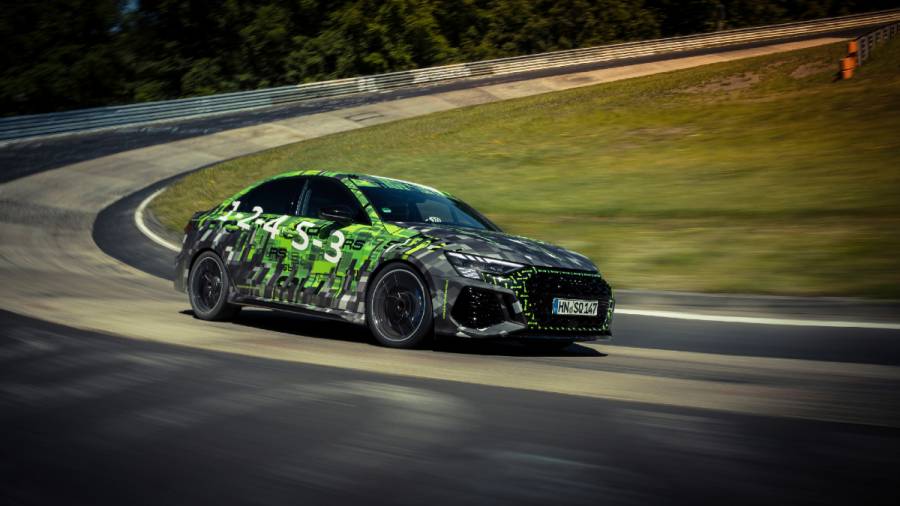 The Audi RS 3 is the fastest acceleration car in its segment, getting from 0 to 100 kmph in 3.8s with the 400PS and 500 Nm it makes from the 2.5-litre five-cylinder turbo. The raft of new technologies that have been introduced in this generation has helped the RS 3 claim the record says Audi. The new torque splitter function is most instrumental, allowing for more precise torque delivery to the rear wheel. The disc clutch on each of the drive shafts that form a part of this can send more torque to the outer rear wheel around corners allowing for better performance out of turns. The newly added RS Performance drive mode that optimised the drivetrain for track use works in conjunction with this to kill oversteer or understeer. The record-breaking car was fitted with Pirelli P Zero Trofeo R semi-slick tires optionally available on the RS 3. The RS Performance mode two suspension setting also helped here with one mode optimised for uneven tracks like the Nordschleife and a stiff setting for more traditional circuits. The RS 3's carbon-ceramic brakes were also been useful during this run.

With Audi India doubling down on widening its product range, especially with its Audi Sport performance cars, we should see the RS 3 come to India eventually. This should most likely be in the sedan Bodystyle. Audi's next major launch for India is the Audi RS 5 Sportback.