Ahead of the festive season, Bajaj Auto has launched an updated Platina in India. The Bajaj Platina Comfortec is available in two trims - kick and alloys (Rs 43,193) and electric start and alloys (Rs 45,164), ex-Maharashtra. 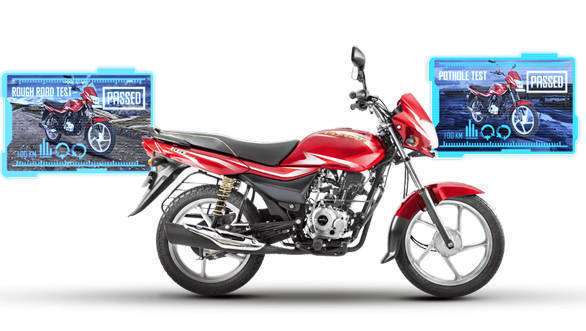 Bajaj says that it has tweaked the suspension of the Platina to make it more comfortable. This includes a 28 per cent longer front suspension and 22 per cent longer double springs at the rear. The seat is also claimed to have been made more softer and rubber pads have been added to the foot rests. Other features of the Platina, which was launched last year, remain the same. This includes the 102cc 8.20PS/8.06Nm DTS-i engine. The engine is mated to a 4-speed transmission. Bajaj claims a fuel efficiency of 104kmpl from the Platina Comfortec. The company says that Platina Comfortec also has 65 per cent less overall maintenance with a service required at every 5,000km and an oil change at 10,000km. The motorcycle runs drum brakes on both the ends.

Bajaj has also launched a new heroic red colour for the V15 while the Avenger Cruise gets a golden colour option. There are no extra charges for opting for these colour schemes. Bajaj is expected to launch the CS400 in India this festive season. The Bajaj CS400 was first showcased at the Auto Expo 2014 and its engine is based on the KTM 390 Duke's motor. Expect it make around 42PS of power and to be priced around Rs 1.6-lakh mark. Bajaj has also reduced the number of Discovers to just three. The all-new Discover ST range is also now discontinued.