After news reports of Royal Enfield possibly pulling the plug on its 500cc range of motorcycles surfacing the internet, the spy pictures of the BSVI complaint Thunderbird X are doing rounds over the internet. 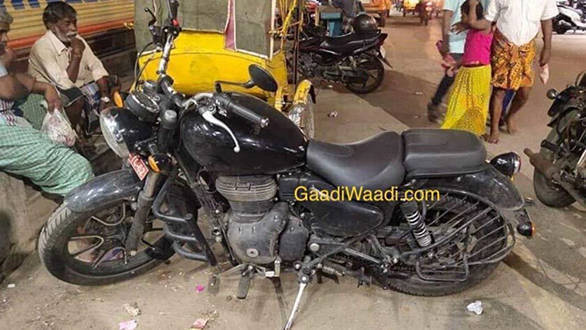 The 2020 Royal Enfield gets a new platform, engine and revised cycle parts. What gives away the generation upgrade is the new twin-down pipe cradle chassis that houses a new engine. The crankcase cover carries a similar design to the one we see on the Interceptor 650, which could mean the engine could be based on an all-new design resulting in a different capacity than the 350cc or 500cc. Gone is the right orientation of the chain-drive and the new drivetrain has a more conventional layout. The front disc brake that we see mounted on the left of the wheel has been moved to the other side indicating a new braking setup with suspension geometry. The twin-pod instrument cluster on the current generation Thunderbird will be swapped for a monopod instrument cluster which most likely is a mix of analogue and digital display. The exterior changes include redesigned panels, redesigned headlamp unit. The exhaust carries a new design as well. Similar changes can be expected on the Royal Enfield Thunderbird. The new generation of BSVI compliant Royal Enfield motorcycles is expected to break cover in the first quarter of 2020. Expect a hike in price by Rs 10,000 across all models.