General Motors has started exports of the Chevrolet Beat sedan from India to Latin America. The first batch of 1,200 sedans were exported recently, while production started on June 5, 2017. 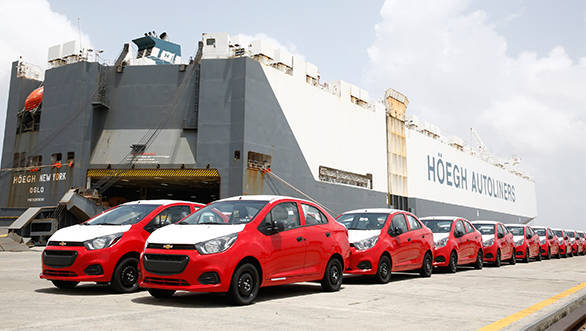 Chevrolet manufactures the Beat sedan out of the lone operating plant its has in India - Talegaon. While the sedan (Essentia) was showcased at the Auto Expo 2016 and we have spotted the car on tests multiple times, sadly, it will never be sold here. GM India had recently announced that they are stopping sales by end-2017.  Aside from the Beat sedan, Chevrolet also exports the hatchback from India. It is expected that the Beat sedan will have the same engines as the hatchback - a 1.2-litre petrol and 1.0-litre/1.3-litre diesel. The lone transmission will be a 5-speed manual. The Beat sedan gets a 7-inch touchscreen infotainment system with Android Auto connectivity.

Asif Khatri, VP of manufacturing, GM India, stated that the Talegaon facility will be the hub of exports for the company. He further added that the exports from this facility has been tripled in the past year, with the highest recorded monthly sale of 8,297 units.