The TVS Himalayan Highs Season 2 was more than 10 times as much fun! Allow us to explain. Last year Anam Hashim and her TVS Scooty Zest 110 reached the top of the Khardung La. This achievement was marked by TVS with the Scooty Zest Himalayan Edition.

This year, for Season 2, TVS got Anam and her Zest to lead a group of 10 girls up to the top. The girls, selected from entries, ranged from the young to the experienced, and they came from all over the country.

Not only did they sail through all the challenges, the Scooty Zest 110 ran wonderfully through tough conditions to emerge on top. 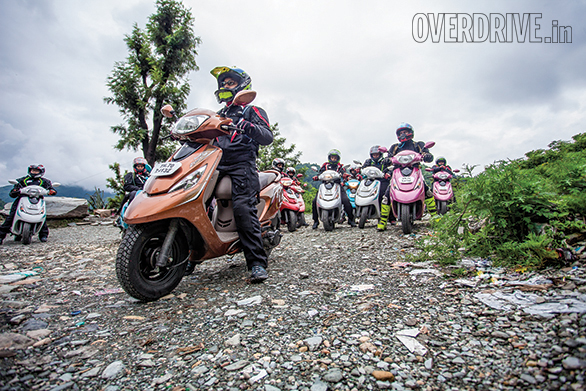 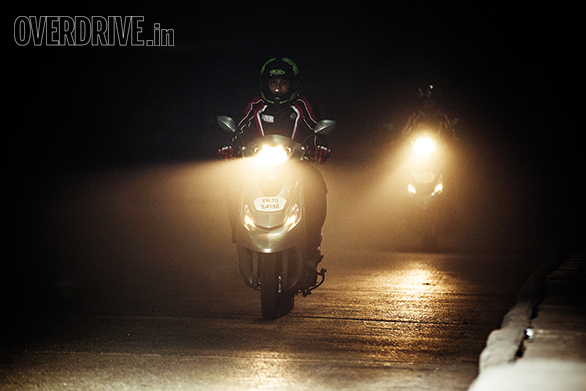 The TVS Scooty Zest 110s of the TVS Himalayan Highs Season 2 exiting the tunnel at Aut. The Aut tunnel spans 3km and is amongst the longest road tunnels in India 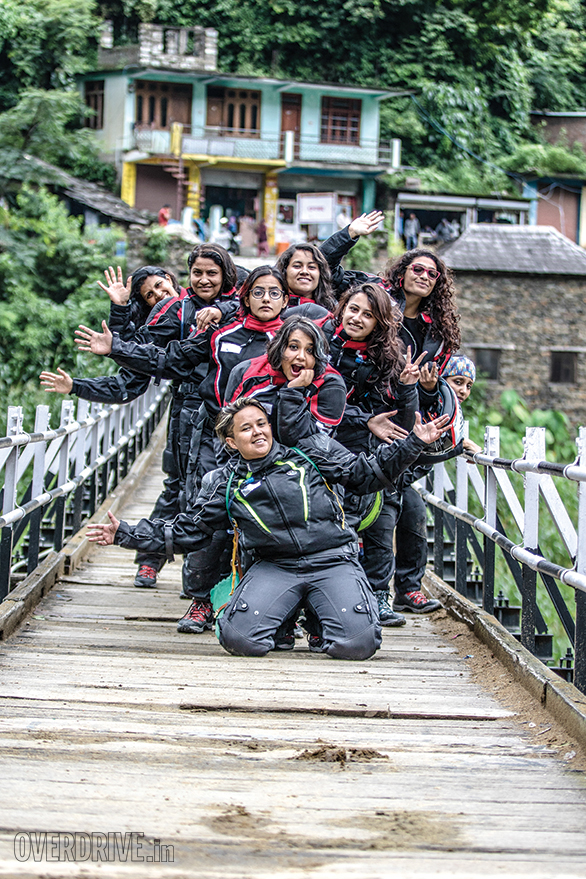 The ladies of the TVS Himalayan Highs Season 2 post on a suspension bridge near Aut between Mandi and Manali, in Himachal Pradesh 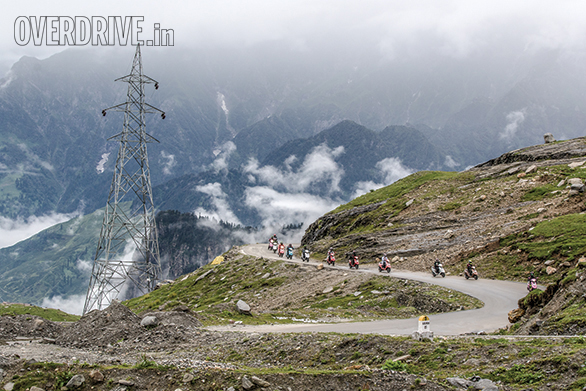 Rohtang used to be such a messy pass to climb. Not any more. The roads snaking out of Manali towards the pass are empty, and on some stretches the quality tarmac, epic mountain landscapes are absolutely thrilling! 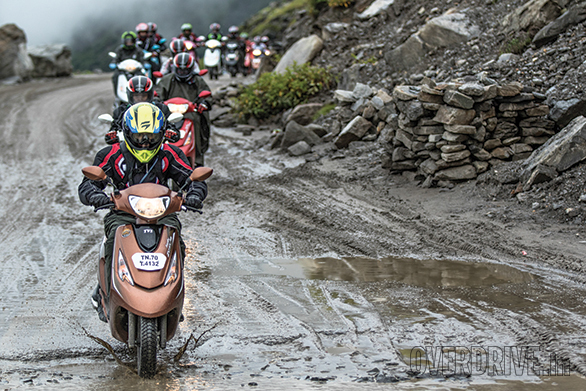 The roads going up and especially coming down from the Rohtang pass were devoid of traffic. But as usual, the Himalayas laid out a tough test for the Scooty Zest-mounted TVS Himalayan High Season 2 convoy which had to traverse hours of slush 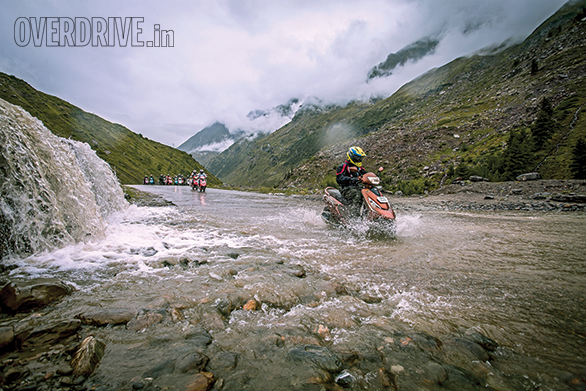 The water crossings are always interesting. This one is the easiest one. Shortly after Khoksar, the water flows across a concrete bed that makes riding through it charmingly easy

A participant on the TVS Himalayan Highs Season 2, Pallavi Fauzdar, makes short work of a water crossing on the TVS Scooty Zest 110 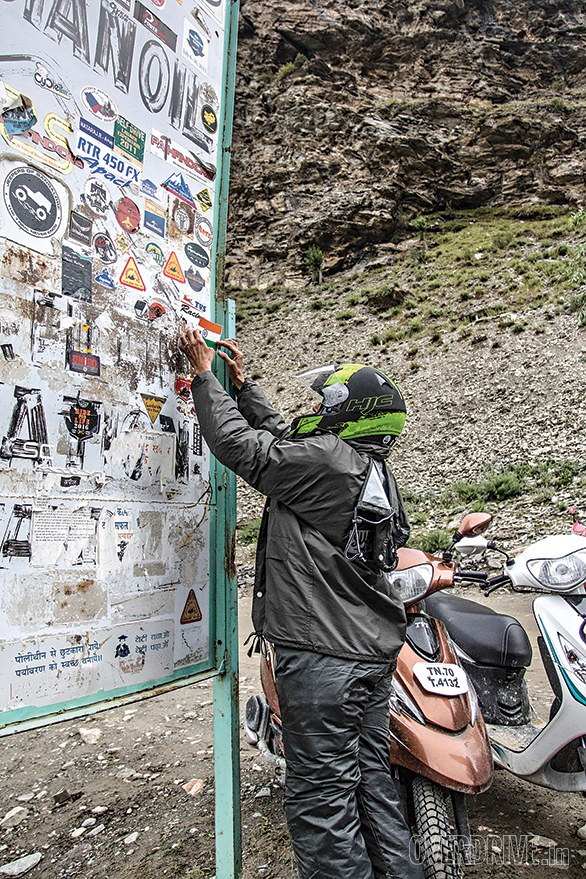 The signboard at Tandi, near Keylong, is supposed to proclaim a fuel station. What it has become is a signpost for travellers to leave their mark. Tandi is the last fuel station before Leh - a 365km run. Here, a TVS Himalayan Highs Season 2 participant, Trupti Sarmalkar, adds an Indian flag to mark the passage of the TVS Scooty Zest 110 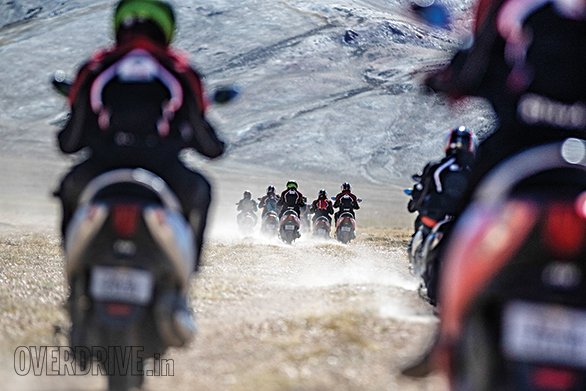 The More Plain is an incredible high altiude plain that years on continues to take our breath away. Here the girls of the TVS Himalayan High Season 2 take a trail to go get a better view of the incredible valley just after Pang 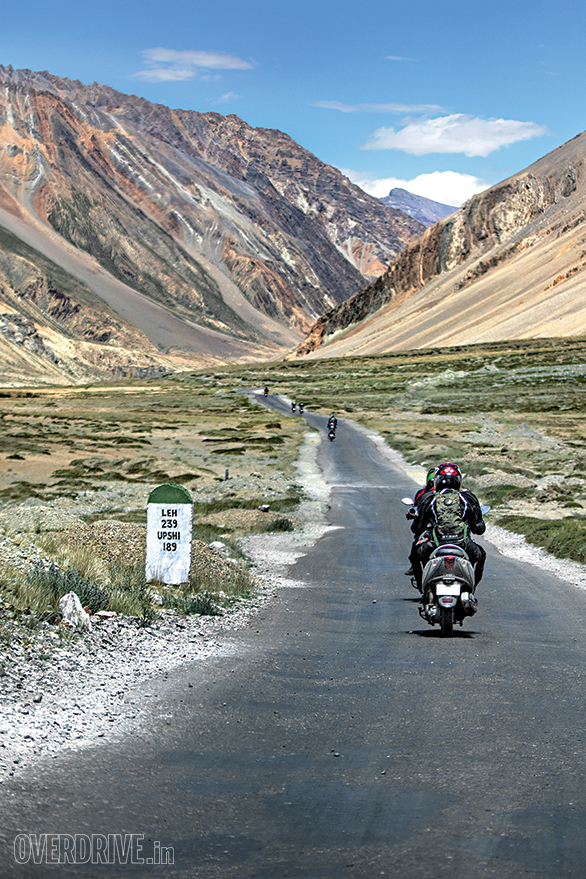 Sarchu is the first of the plains, and it's one of the places the TVS Himalayan Highs Season 2 called home for a night. A night in the cold, windy, 14,000-foot-high camp can be trying though, no matter how inviting this photograph looks 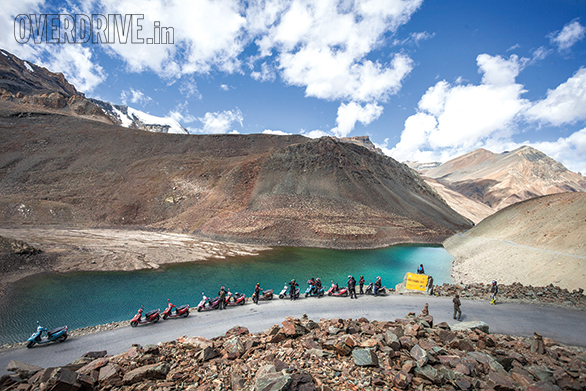 Suraj Taal is one of the two lakes you see before you come to the top of the Baralach La. Suraj Taal is also called Vishal Taal in the memory of a fallen Indian Army officer. On the right the vehicles are climbing up from the Army recovery camp at Patsio 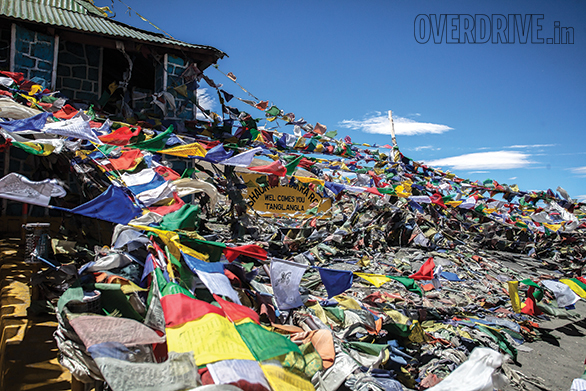 Tanglang La is a hard pass to climb. Not just because it is a long climb to a very high pass, but because you can see the pass clearly right from the bottom. The forest of prayer flags underlines that it is a windy pass. The belief is that the wind carries the prayers to the gods 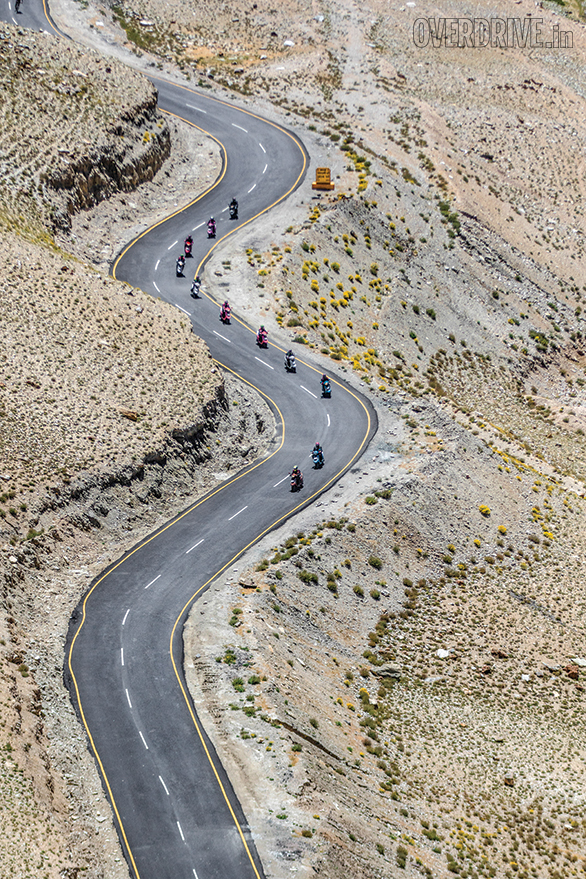 The roads as you descend into Leh from the Tanglang La are just incredible. Great tarmac, good markings and the sense of the fact that Leh is around the corner adds a certain zing to the riding

The belief is that prayer flags send prayers to the gods with every flap in the wind. Here the flags overlook the green of the valley below the Thiksey Monastery 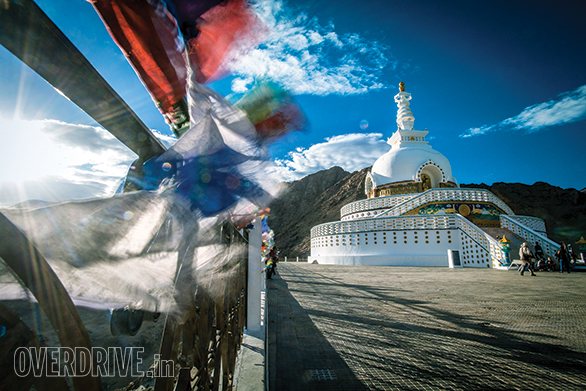 The Shanti Stupa on the outskirts of Leh is a modern monument which has become popular for the views of the city, the Zanskar range as well as towards Khardung La 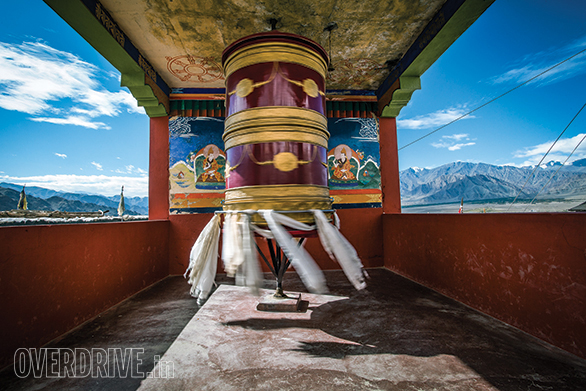 The Thiskey Monastery is near the town of Leh and has incredible views as well as architecture. And a sense of endless peace 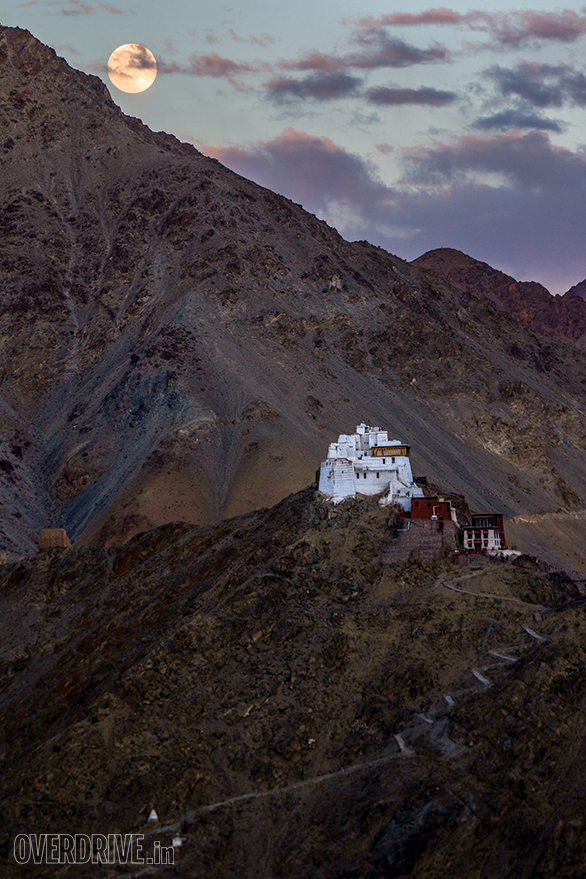 The moon rises over the mountains. The mountains rise of the Leh Palace. Which in turn rises above the busy, tourist-y town of Leh. The evening views from the Shanti Stupa - like this one - are amazing

The Shanti Stupa is a place of peace. And it has stunning vistas in every direction. Here we catch the dramatic sunset from the Stupa as we look on the city of Leh. Towering above the city is the Leh Palace. See if you can catch the quick ascent of the moon! 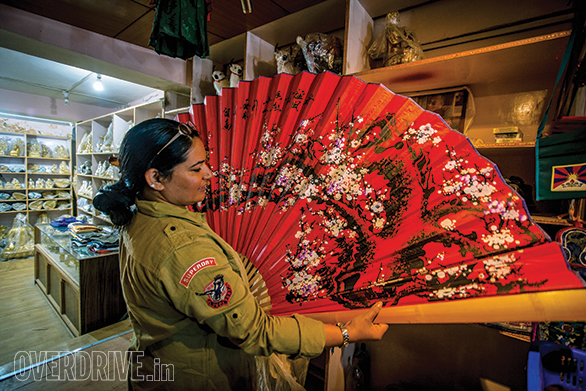 Pallavi Fauzdar, one of the TVS Himalayan Highs Season 2 participants, out shopping in Leh

Looking back at Leh on the climb to the top of the Khardung La. Notice the chortens on the right of the photo 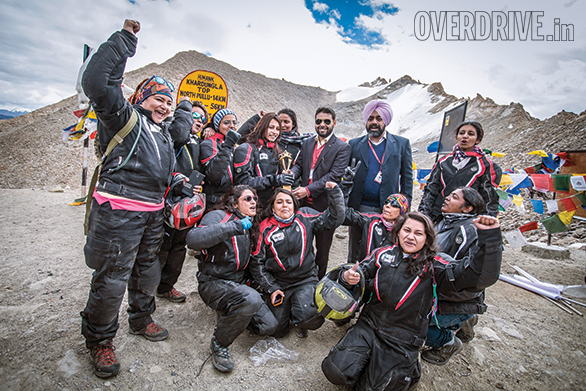 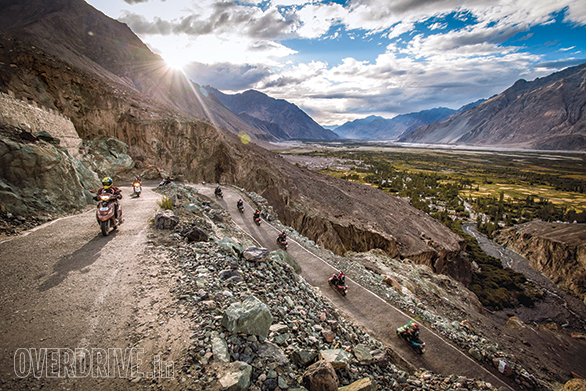 This narrow road climbs to the ancient - established in the 14th century - but remarkably well-kept Diskit Gonpa near Diskit, in the Nubra Valley

The TVS Scooty Zest 110s of the TVS Himalayan Highs Season 2 pass what looks like mountains above and below. That's an illusion. The mountains are all-around dwarfing the scooters and the participants alike 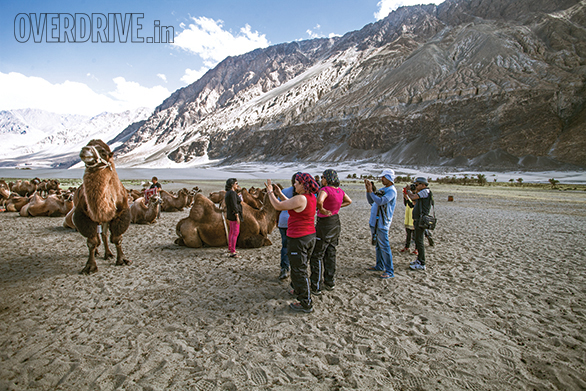 Bactrian camels are leftovers of the importance of the Nubra Valley as a way point on the ancient trade routes. The story goes that traders left them behind and they're still here. They might have twice as many humps as normal camels, but their ill-temper is just as obvious as with normal camels

The Nubra Valley looks wonderful, no? The TVS Himalayan Highs Season 2 participants saw this view in the late afternoon from the lofty 14th century Diskit Gonpa above the village of Diskit on the Shyok River 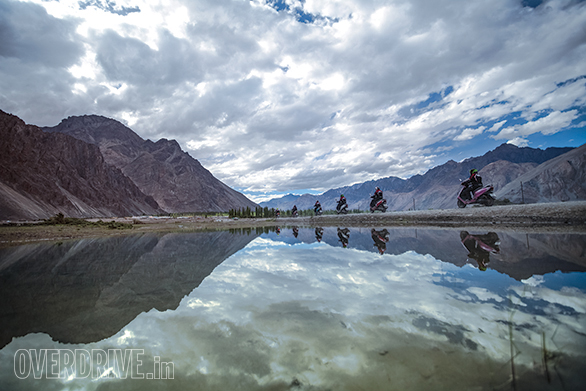 The rare appearance of lush green and flowing water marks the Nubra Valley plain through which the Shyok River flows with great urgency. Here the girls of the TVS Himalayan Highs Season 2 ride back to the main road after meeting the Bactrian camels of Hunder

These are the views on the sunny day as you ascend out of Leh. This is what the TVS Himalayan Highs Season 2 participants left Leh for home after a week of amazing riding, views and camaraderie