Mercedes-AMG reveals the GT Black Series, with its most powerful V8 ever 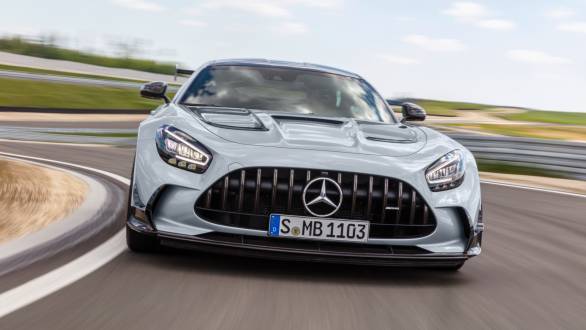 In keeping with this heritage, the AMG GT Black Series has been extensively worked on. It is much more performance-oriented now, even when seen alongside the already very focused AMG GT R and GT R Pro. And nothing expresses this better than the new look. For the Black Series, the front-end takes very heavy inspiration from the GT3 racecar, with a wider, deep-set grille. This feeds in the air directly into the heat exchanger, removing the need for the side air dams in the GT R. In place of this are the slimmer air intakes which optimise aerodynamics and improve brake cooling, along with the new fins on the front wheel arches. There is a new carbon-fibre front splitter as well, a two-part design that can be manually adjusted between Street and Race modes. In Race mode, this can be lowered even further for added downforce. 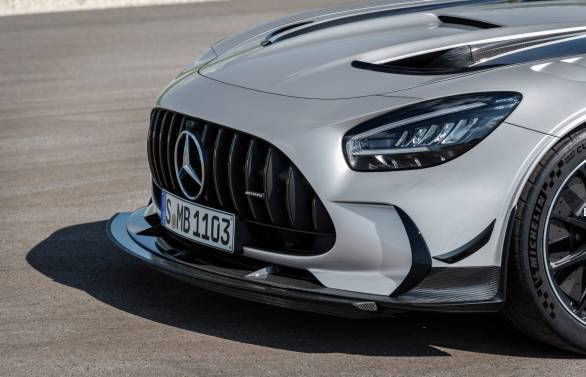 Further along, there is a new carbon-fibre bonnet for the GT Black Series featuring two outlets to expel air from the engine. There is even more aero functionality here, this air is then guided around the car, over the louvres on the front fender, over the larger side sills, and to the rear. There are large side-sills both front and back for improved cooling. The most striking new change in the GT flagship is the two-bit rear spoiler that sits on the carbon-fibre boot. This element is made from carbon fibre as well, the bottom one has been made smaller to better control the air coming from the front of the car. The top blade also features a movable section. In its flat position, it reduces air resistance and helps in top-speed runs. In situations where braking performance and cornering stability is needed, it moves to an inclined position. Usually, this happens below 250 kmph, the flap returns to its flat position over this speed. This function can be activated via the Master setting on the AMG Dynamics program, or manually.

The rear exhaust outlets and diffusers have been completely redesigned in the GT Black Series, replacing the integrated three-part exhaust/diffuser set up from the GT R with a separated quad-exhaust outlet. There is an almost completely flat underbody as well, these feature special fins to channel airflow to the new diffuser. In effect, all of these aero enhancements give the Mercedes-AMG GT Black Series 400 kgs of downforce at 250 kmph. 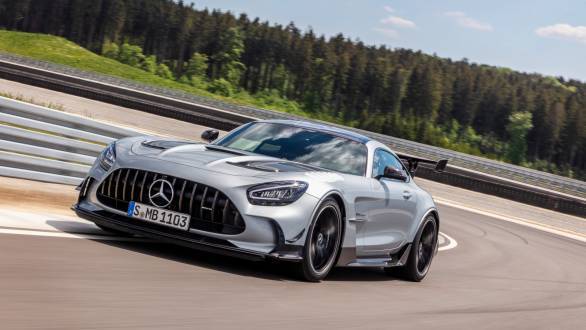 The GT R was already quite carbon-heavy, but the Black Series has taken things up a notch in this regard. As available with carbon package in the GT R, there is a carbon-fibre roof, bonnet and boot lid. Further, there is a connected network of carbon fibre components to strengthen the aluminium body. A new lightweight front axle component and carbon-fibre shear panel in the engine bay improve response and allow for sharper steering. 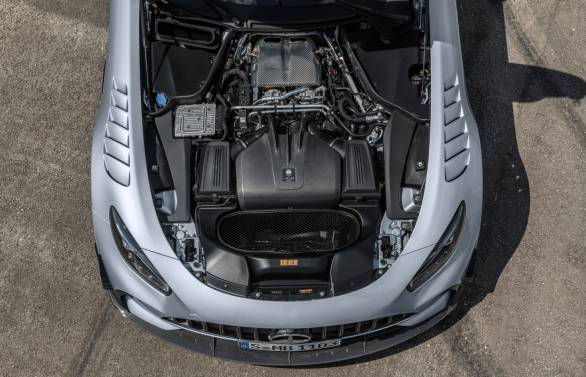 But this is an AMG, and these extensive bodywork changes are still overshadowed by what has changed under the hood. The Mercedes-AMG GT Black Series is the most powerful V8-powered Mercedes ever.  The AMG 4.0-liter V8 has been so heavily fettled with that it now carries the new M178 LS2 internal designation.  Most notable, it has now moved from a cross-plane crankshaft to a flat-plane crankshaft. This is the first such arrangement from AMG, and has led to improved throttle response and higher power outputs. This is a fundamental change to the engine, and is accompanied by other advancements such as new anti-friction bearings for the twin-scroll turbochargers, and larger compressor wheels. This has improved throttle response and made the turbos most responsive. New camshafts and exhaust manifolds are other additions to improve the gains from the new engine configuration. 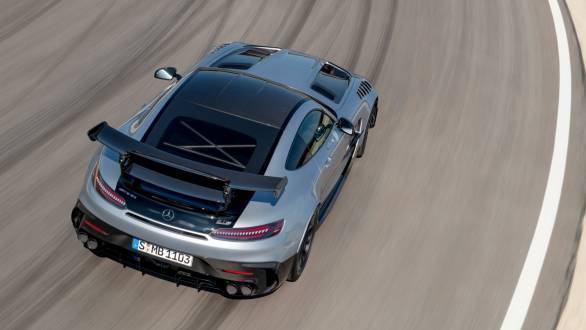 The Black Series continues with its transaxle drivetrain. The seven-speed AMG DCT is still mounted on the rear axle and continues to connect to the engine via the 'torque tube'. The changes made to the gearbox amount to improved shift performance and response times. The suspension hardware has been carried over from the GT R and GT Pro, but there have been changes made to it for sharper response and damping more suited to the Black Series. Further, the dynamic engine and transmission mounts have been retuned. The Black Series sits on specially-developed Michelin Pilot Sport Cup 2 R MO tyres. These come with two compound options and  are sized 285/35 R19 for the fronts and 335/30 R20 for the rears. 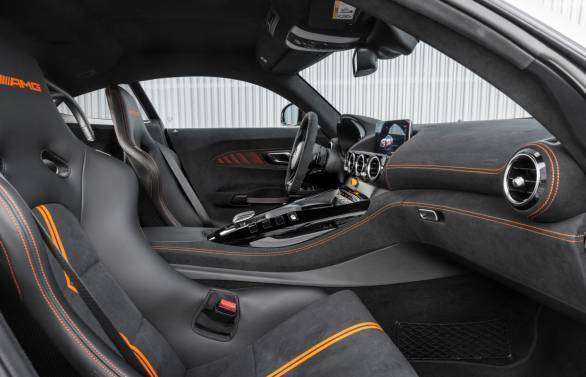 The AMG GT Black Series carries over the nine-step traction control system but with new tuning and with a dial that allows for it to now be used while wearing racing gloves. The interiors have been carried over from the 2020 GT R, and gets all the improvements that car got, such as the new digital instrumentation, the display buttons on the new steering wheel and centre console. The Night Package, an option on the GT R, is standard here and adds gloss black and aluminium interior trim. Unique to the Black Series is the orange contrast stitching, new carbon-fibre seats, and new door panels with loop pulls. In markets other than the USA, China and Canada, a track package is available. This gets you a roll-cage, four-point seat harness and a fire extinguisher.

Like with the previous Black Series models, the Mercedes-AMG GT Black Series is expected to be built in very limited quantities and charge a significant premium over the GT R. The changes made to the GT to turn it into the Black Series are intended to make it an even more focused track machine, and given our recent experience with the GT R, we expect this car to hold up to its brief very well.