With the relaxation of the lockdown, we managed to get our hands on the Creta's diesel variant. A good two months had passed since we drove the Creta 1.4 petrol, and by now we'd started to warm up to the design of the new Creta. I, for one, frequently referred to the design as polarising in my first review of the car. In the dimly lit parking lot from where I picked up the diesel, the coupe-SUV-like silhouette of the new Creta looked quite charming and the controversial daytime running lights added more drama in that mystic ambience. "Yes, this design has started to grow on me," I told Anis, our photographer. 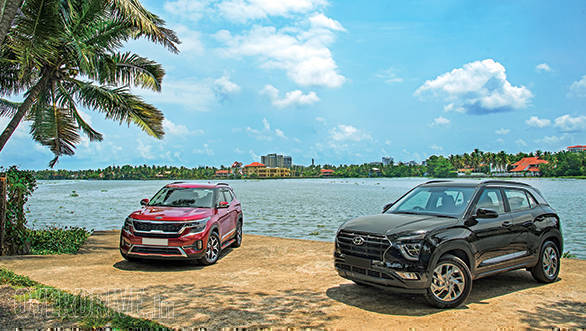 But on the journey that followed, we came across a Seltos, painted in a gunmetal grey with the sporty red accents, and it instantly dented the infatuation I was beginning to feel for the new Creta. If I was to buy one purely based on an emotional connect with the design, the Seltos would be it.

If I were to break down that verdict, the sharper detailing is what attracts me towards the Seltos. It has a sense of speed to it that I like. The dimpled pattern on the grille's bezel is another likeable feature - an example of the attention to detail in the design. The Seltos marries the old Creta's classic SUV poise to the exaggerated elements typical to Kia, and that balance just works. 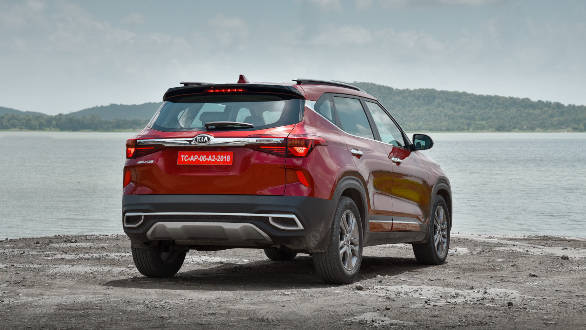 The updated Creta is marginally smaller than the Seltos in terms of dimensions, and they have experimented with quite a few things  a more rounded-off form, radical lighting elements, the concave wheel arches instead of ones that are flared out, and the bold accents akin to some premium cars. All of it comes together quite nicely and makes the Creta appear like a completely new car over its predecessor. 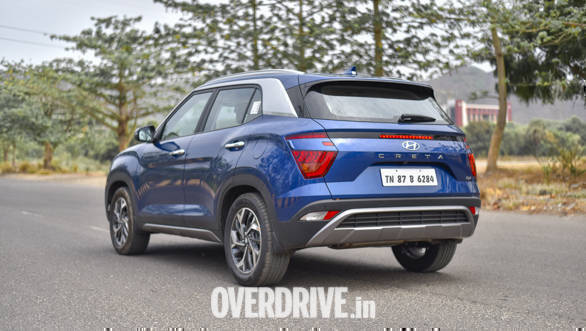 Barring the Nissan Kicks, every car in this segment has radical styling cues and the Seltos and the Creta have pushed that envelope the furthest. I can't quite predict which one of these will age well, but it is certain that the Creta looks the most unique of the lot.

While the Hyundai designers have managed to achieve a significant differentiation between the Seltos and the Creta, the cabins of the two cars immediately make obvious the common threads. The dashboard layout, the digital instrumentation, the touchscreen infotainment are common between the two cars. The hardware and software, therefore, looks, feels and performs the same way too and is easily the best package in the segment - even trumping the MG Hector's vertical screen with faster responses and more reliable operation. But as we found out during our previous tests, the Hector's audio quality remains the best-in-class even with the Bose system in the two Koreans playing crisp and clear music. On that note, the speaker housings in the Seltos have an abstract surface, while the Creta settles for conventional flat covers. Both cars have ambient lighting with two cabin colour choices on offer, the fit and finish is top-notch too and again, a segment benchmark. What differentiates the cabins of the Seltos and Creta from each other are the features on offer. 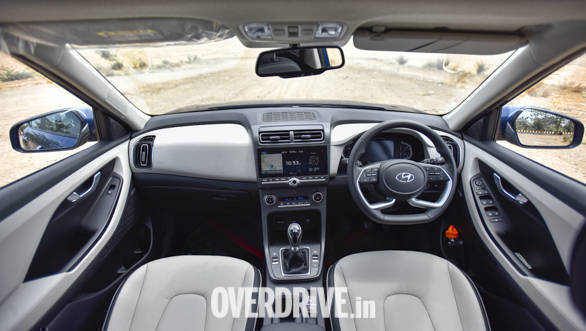 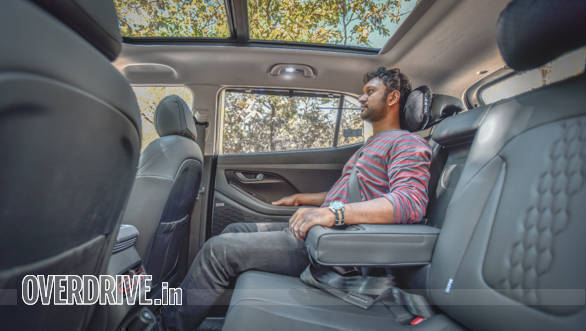 Thanks to an increase in wheelbase, the Creta is now roomier and on par with the Seltos, but the two cars are still no match for the enormous space offered by the likes of the Hector and the Tata Harrier. Therefore, the two siblings make up for the lack of size with class-leading features and creature comforts. Both come with a plethora of connected tech, with the most notable functions being the ability to remotely start or immobilise the engine, pre-cool the cabin, start the cabin air purification, geo-fence the car, and even track its whereabouts or fuel status from the convenience of your couch. Perfect for quarantine times, yeah? While the Creta has a massive panoramic roof (likely a huge plus for many), the Seltos offers more usable features likes a blind-spot camera, a 360-degree parking camera (on the GT line) and a tilt and telescopic adjustment for the steering wheel. I wonder why the Creta would omit that last feature at this price point. 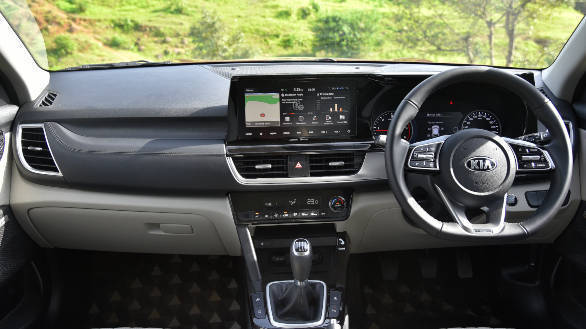 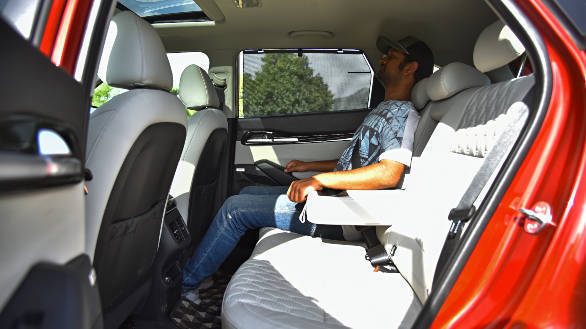 While we like the overall cabin design of the Creta, which seems more pleasing than the Seltos to me, the Kia scores more points for the longer list of features that it offers.

The crash-worthiness of the chassis remains the same for both cars, thanks to the platform sharing. Both cars use advanced high-strength steel in their construction, have front airbags and ABS with EBD as standard and the top-end trims will even offer six airbags and disc brakes on all four corners of the car. Strangely though, the Seltos will need you to go with a diesel automatic for that kind of safety, which is a downer. Where the Seltos offers a little bit of respite is with the 360-degree and the blind-spot cameras which double up as a safety feature. We hear that a Seltos diesel manual with the entire safety pack will be offered post the lockdown, but for now, the Creta takes home maximum points in the safety department. Complementing that further is the fact that a tyre pressure monitoring system is standard on the Creta (albeit a low-line system in the lower variants) which adds a layer of safety for the most commonly ignored piece of preventive maintenance.

Like the chassis, the powertrain is another department where the Korean siblings are almost identical. Both cars use the same 1.5-litre 4-cylinder diesel that produces 115PS of power and 250Nm torque. This BSVI engine replaces Hyundai's 1.6L, 126PS/260Nm motor from the previous Creta. We loved that motor for its eager acceleration and on-tap performance, which made it an easy city driver and excellent highway cruiser. Despite the marginal drop in power, torque and displacement it still maintains those attributes and you would have to drive the new engine back to back with the previous Creta to notice the differences. In terms of numbers generated, the Creta 1.6 hit the tonne from a standstill in 10.9s, whereas the new Creta 1.5 does it in 11.6s, while the Seltos is marginally quicker at 11.2s, yet again proving to be the sportier of the two. A similar, marginal difference in the Seltos' favour is also observed in the in-gear acceleration tests. Interestingly though, the Creta's engine runs relatively more relaxed when cruising at 100kmph in 6th gear, needing around 2,000rpm, compared to the Seltos which requires 2,200rpm. Also worth noting is the fact that the Creta's low-end shove has been subdued to make driving easier in the city than before. 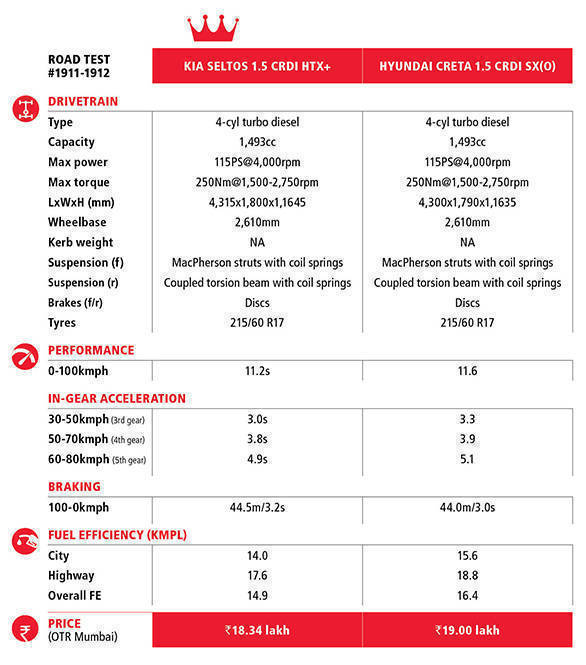 The Creta 1.5 claws back some ground in the fuel economy department though, beating both, the Seltos and the outgoing Creta 1.6 with respectable numbers. Though they are still not in the same zone as the class benchmark  the Renault Captur 1.5 diesel, which returned a staggering 18.5kmpl overall in our previous tests. The Creta managed an overall 16.4kmpl versus the Seltos' 14.9kmpl. 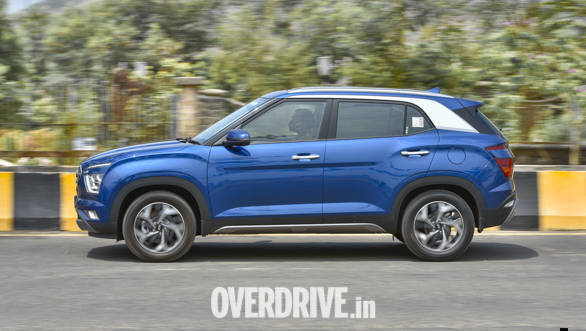 With the increased wheelbase, the Hyundai and Kia engineers also made the suspension setup slightly stiffer and have tuned it for less rebound, giving both the cars tauter handling dynamics. The blokes at Hyundai India told us that the suspension setup on the new Creta is slightly softer the Seltos, but the difference between the two cars is hard to notice. Both take on undulated roads and potholes quite well and the suspension also has a fairly silent operation. We were impressed with how the suspension aged on our previous Creta long term tester despite the pan-India drive we undertook with it and we are guessing the new one will be even better. 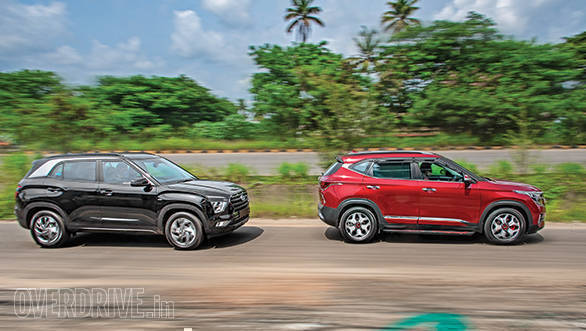 As mentioned before, the low-end shove of the new 1.5l engine has been retuned for smoother acceleration, which means the wheelspin or the torque steer which was common to the Creta 1.6 diesel, has been reduced by a fair margin. The case is similar with the Seltos too. The top-end trims of both these cars also come fitted with traction control and vehicle stability management which add further confidence to the way these two cars drive in the city or out on the highway. High-speed stability is also excellent for the two and if you had complaints about a floaty feel beyond 130kmph in the previous Creta, that has been ironed out in the new one.

As the numbers add up in the points table, the Seltos edges ahead of the Creta, but just barely. In terms of value, it's a mixed bag, with some variants of the Seltos undercutting the Creta (such as the diesel manual, which also loses out on key features), while certain variants are priced higher, with a few more features to show for it. If I was buying for myself, the Creta would be my choice for the more pleasing cabin, and better safety kit to secure that cabin with. 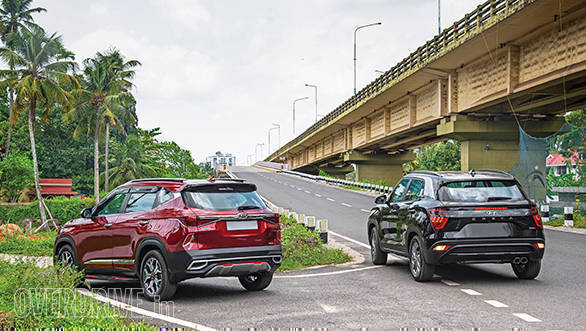 Though it would be hard to ignore the appeal of the Seltos' masculine design, which in my opinion is going to be the biggest selling point between these two siblings. Unlike the two attempts at platform sharing that we have seen from Renault and Nissan in this segment, the Koreans have shown how it can be done right. The Seltos and the Creta have pushed each other to the brink of what the segment can offer in the given limitations of the price points, and in doing that these siblings will keep the lion's share of the market within themselves. I wonder what the competition has up their sleeve now. 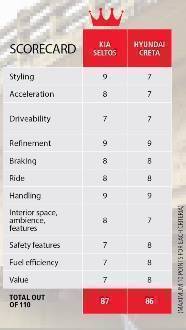