Such a tease this motorcycle is - that red colour tells you it's a fast Italian steed; that upright riding posture tells you it's going to be more comfortable than the reddest of supersport machines you have ever dreamed of; and it looks like nothing else from any other manufacturer meaning that no one is ever going to mistake this motorcycle for anything apart from maybe it's own elder sibling. And if you have wandered onto this story without reading the title, the motorcycle I'm talking about is the new Ducati Multistrada 950S. 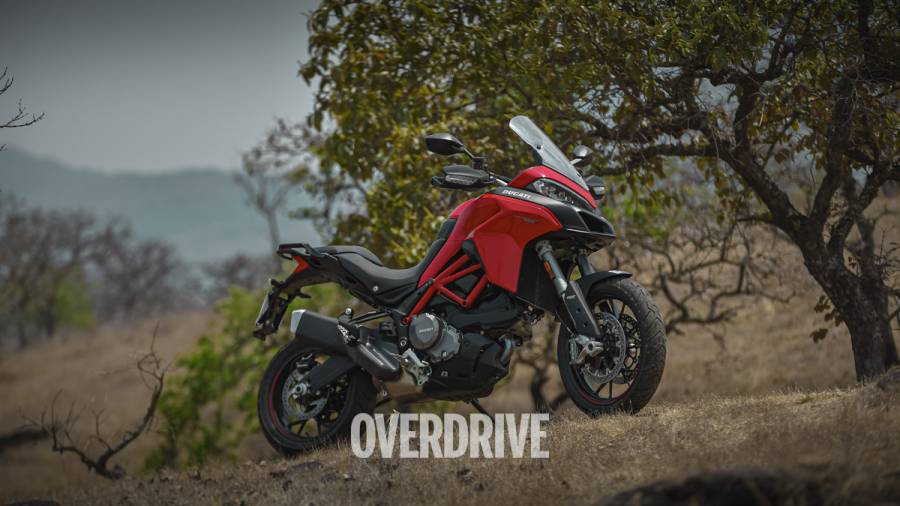 Speaking of wandering, it's not an out and out adventure motorcycle meant to wander the wild outdoors - though it is very capable if you have the muscle and grit to play with it. But at its heart, the Multistrada loves to gobble up the tarmac as if it were an endless string of spaghetti. Despite its 19-inch front wheel, the Pirelli Scorpion Trail 2 tyres and long-travel suspension, it would rather prance happily to and on a racetrack than explore a mountain trail. 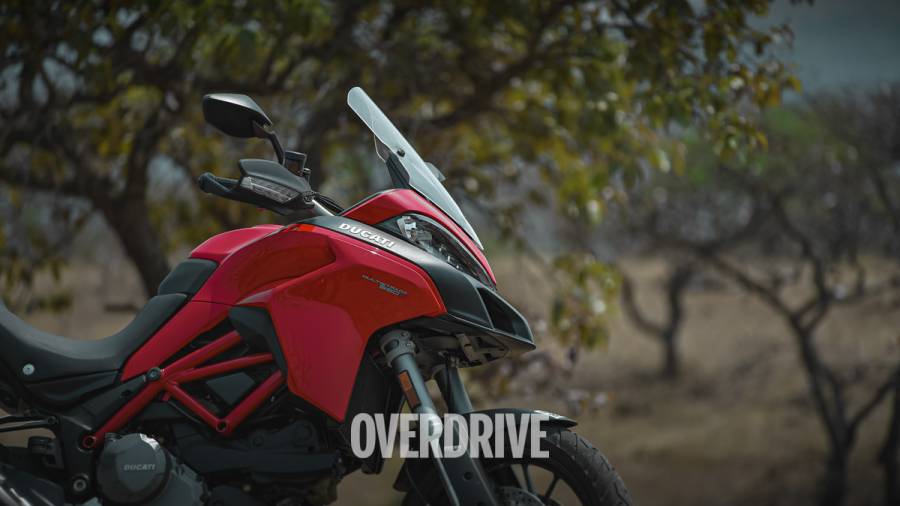 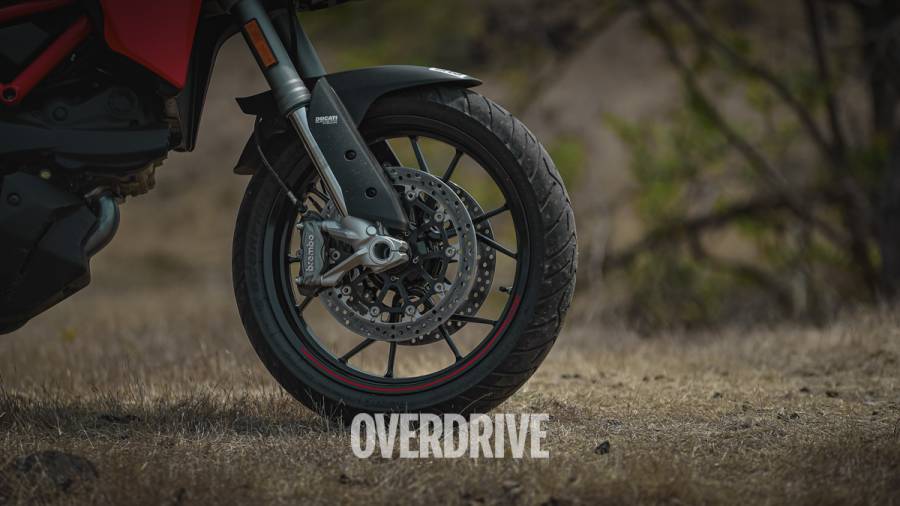 But to be fair, the Multistrada doesn't make any claims of being an off-roader. Sure, there is an Enduro riding mode that will bump up the low-end response of the engine and ease the brakes and traction control for riding on a beaten pathway here and there, but the wide and comfortable seat is made for touring and not for standing up and riding, and all the plastic fairing is made for cutting through the wind and not through bushes. For that sort of thing, you would need the Multistrada Enduro which also comes with wire-spoke wheels and better protection parts for taking a beating from the dirt and rocks. 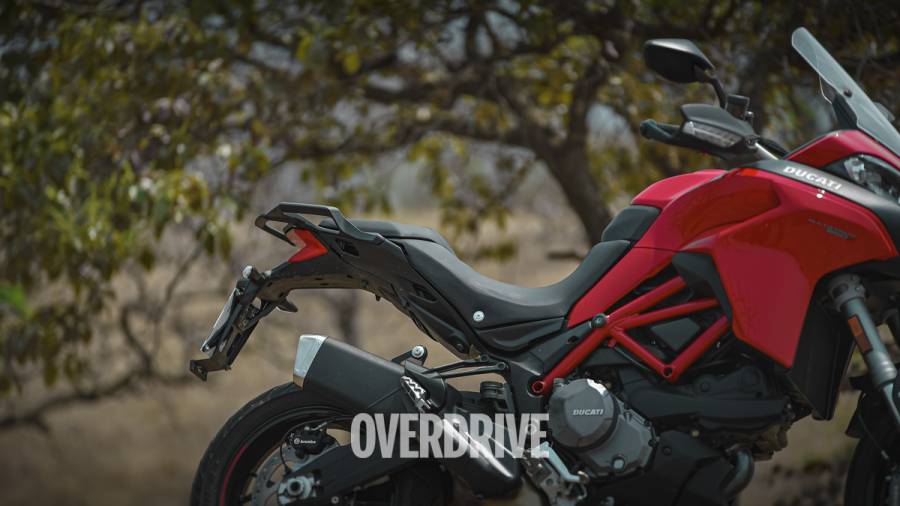 Since we are on the topic of riding modes, the new line of 950s gets a Bosch six-axis IMU which measures your lean angle, amongst other things, to quickly fine-tune the traction control and ABS. It also gives the bike cornering lamps, self-cancelling indicators and more importantly, a hill-hold function - it's a 230kg motorcycle after all. But interestingly, the weight never gets intimidating whether you are commuting or riding hard, and these electronics work discreetly in typical Ducati fashion, again teasing you to leaner further, push harder and maybe even pull away from your supersport buddies on winding roads. Then there is the quick shifter which is occasionally clunky on downshifts but usually smooth, though the auto-blipper can get angry at times. You can choose to use the clutch the old school way too, and the new hydraulic system reduces effort at the clutch lever by a fair margin. 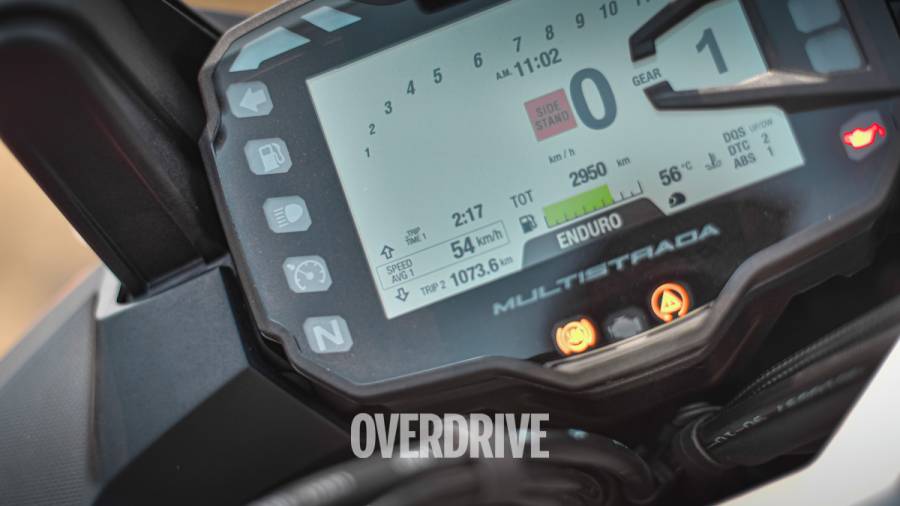 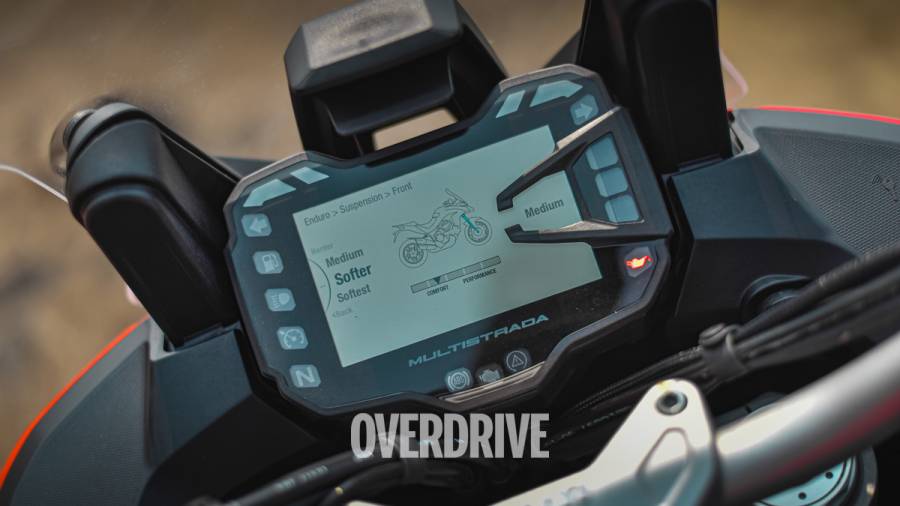 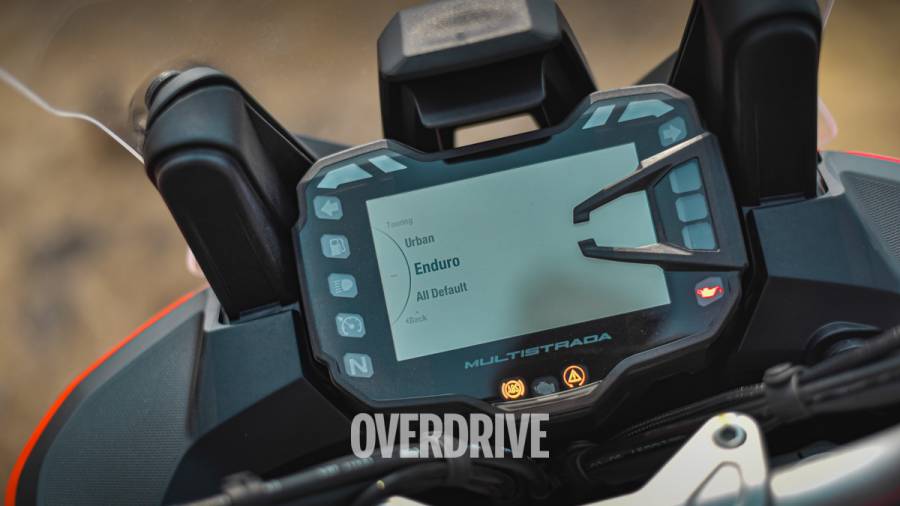 The final bit of silicon trickery hides behind the big fairing - the Skyhook Evo semi-active suspension - which I believe is currently the best of its kind on an adventure motorcycle in terms of its performance. The damping automatically adjusts in the background and the ride is supple even on harsh road conditions. Honestly, the systems from Triumph and BMW don't match up. The suspension can also be firmed up for riding around the twisties and you can feel the changes in the damping. Similarly, the rear can be electronically adjusted for pre-load using presets for passenger and their luggage, and though its movement is noisy, it works flawlessly. The yellow monoshock offers a visual contrast and all the cables and canisters are neatly tucked away from plain sight, highlighting Ducati's premium workmanship. 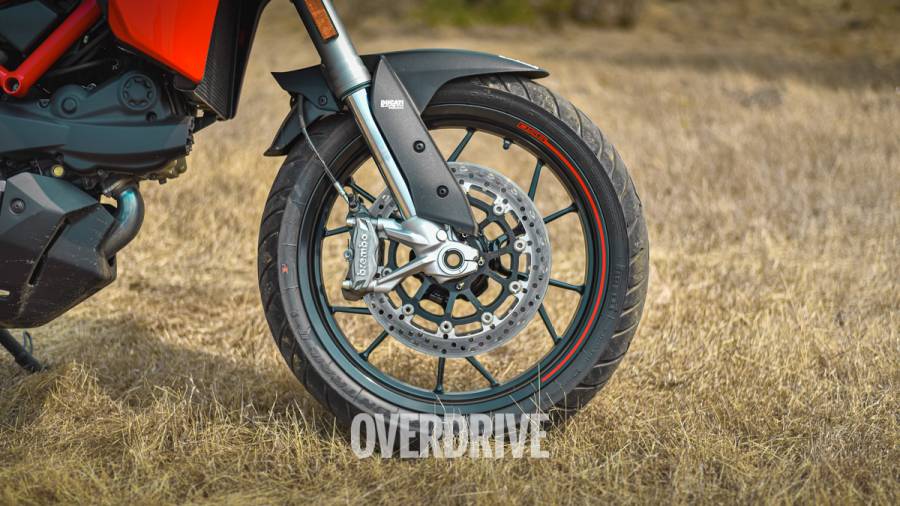 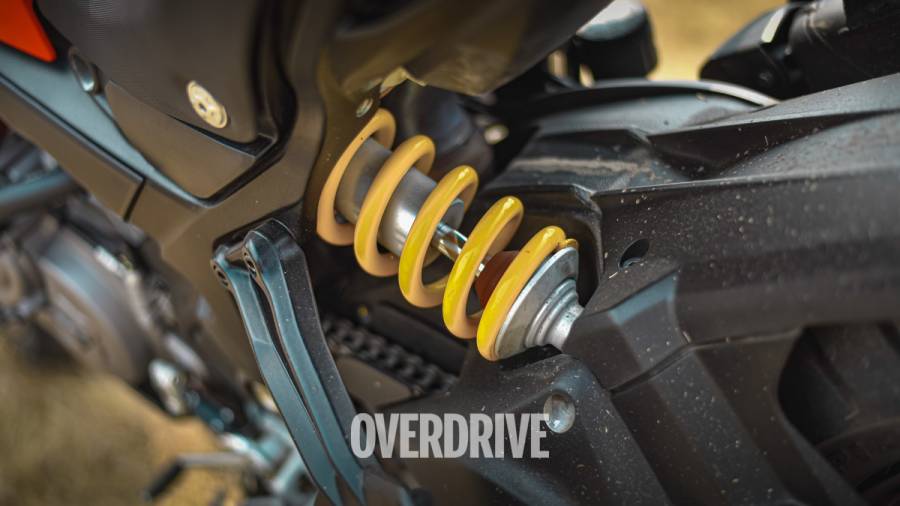 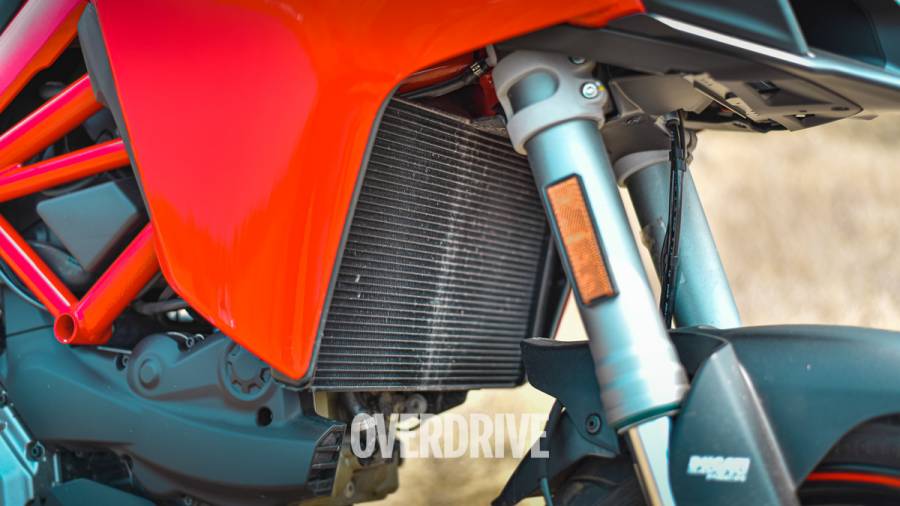 The other riding modes include Urban, Touring and Sport which as you expect, make the powertrain responses sharper, reduce electronic intervention, and stiffen the chassis as you ascend through these modes. You can switch the modes on the fly and the changes seem immediate just like any new-age Ducati. You can also fine-tune the settings within each riding mode, or create your own riding mode if you so wish. The TFT instrumentation is generally easy to read and even flashes a message when locking the bike using the keyless function of the chunky fob. But the menus can get a bit confusing and the fonts can seem a bit smallish for a motorcycle, but it is only a matter of time before you get used to the interface. The electronic systems also allow you to calibrate your tyres from an option in the menu - so I wonder if it will leave you wanting for any more functions in this price bracket. 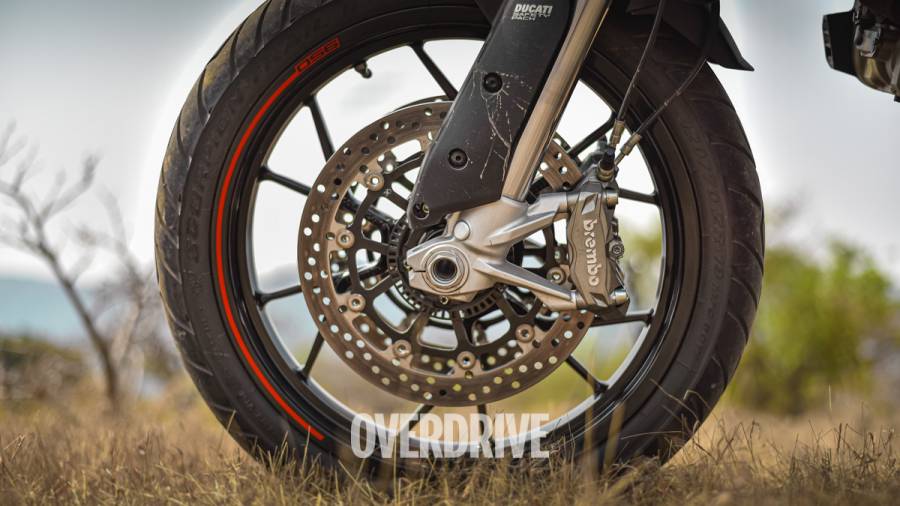 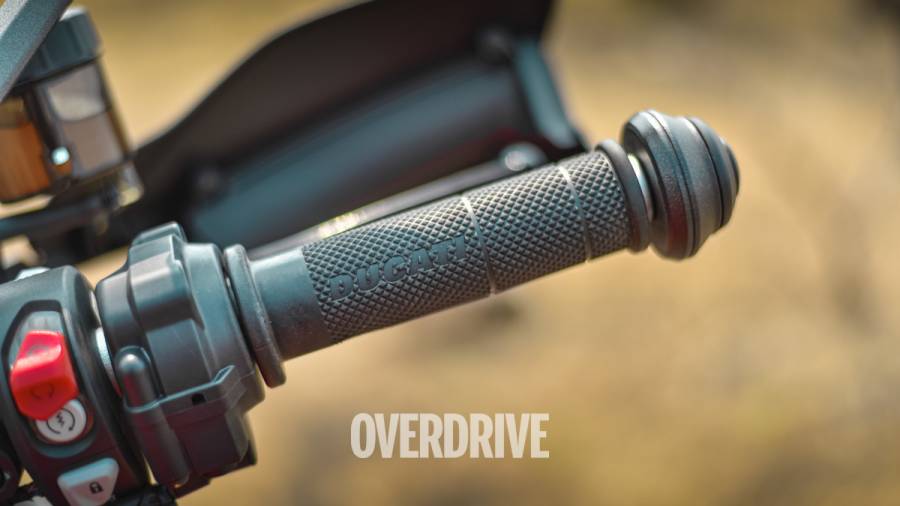 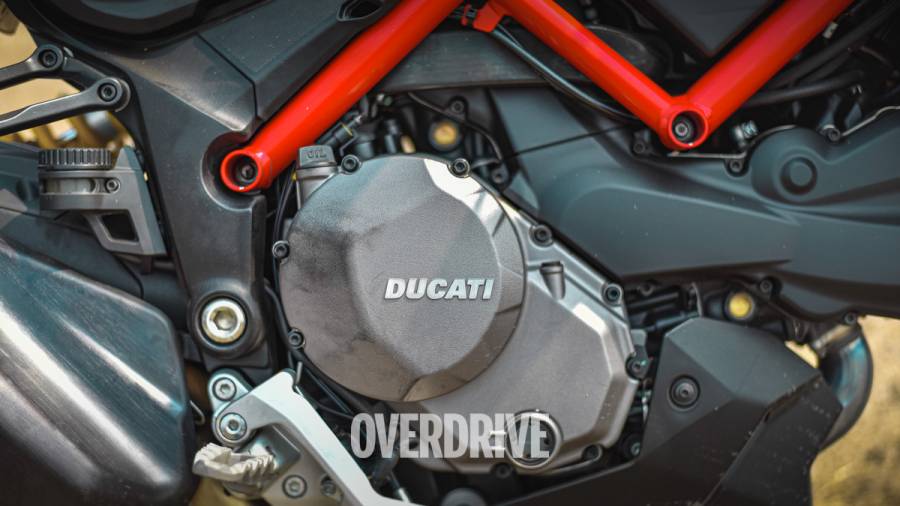 If this also happens to be your first Ducati, then the L-twin motor might need getting used to. It starts off rather silently now (damn you, BSVI), has the typical judders under 3,000rpm (so much that you can see the instrumentation vibrating vigorously), but from there on the journey is a pleasant one. Power comes strongly from 4,000rpm and keeps coming all the way to the red line which is at ~9,000rpm. The typically hollow note of the L-twin is there too, but more siltent than before. Accelerate hard in every gear and you find yourself hitting 100kmph in around 4s and you will soon pass the 200kmph mark without much effort. I really wonder why someone would need anything quicker than this on a road bike, but somehow there are takers for a Multistrada 1260, and soon, a V4 too which will push these numbers much further. 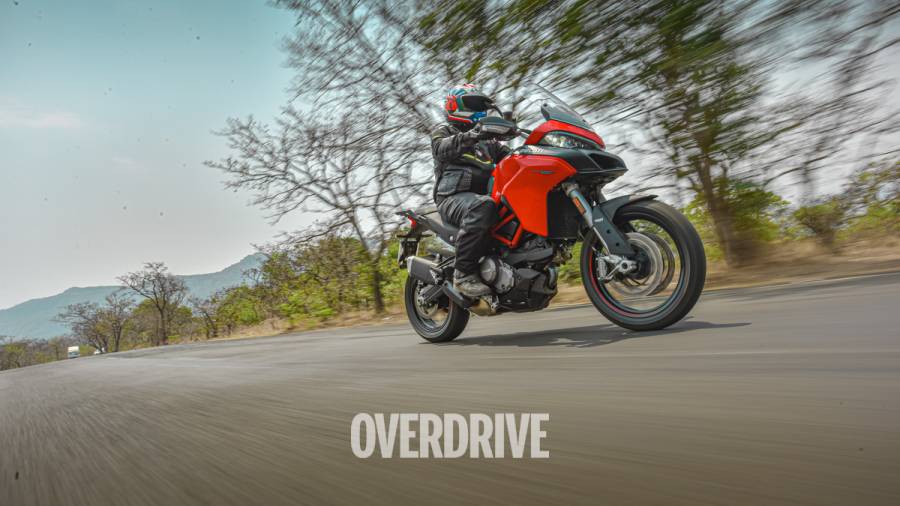 Back on the 950S, the Pirelli tyres may have "Trail" written on them, but they complement the sporty attitude of this motorcycle rather well. I have used this rubber extensively on my Triumph Tiger 800 XRx, but could never push them the way I could on the Multistrada. The electronics certainly play a big role in that department but the result is oodles of grip that makes this one of the best corner carving Advs out there. Think of it as the marriage between Nick Jonas and Priyanka Chopra - not a predictable match, but one that works well in its unique way. 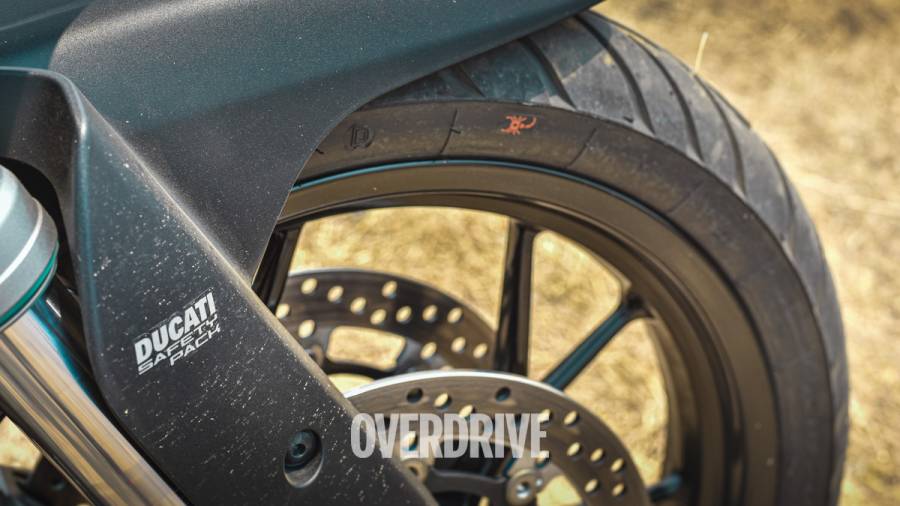 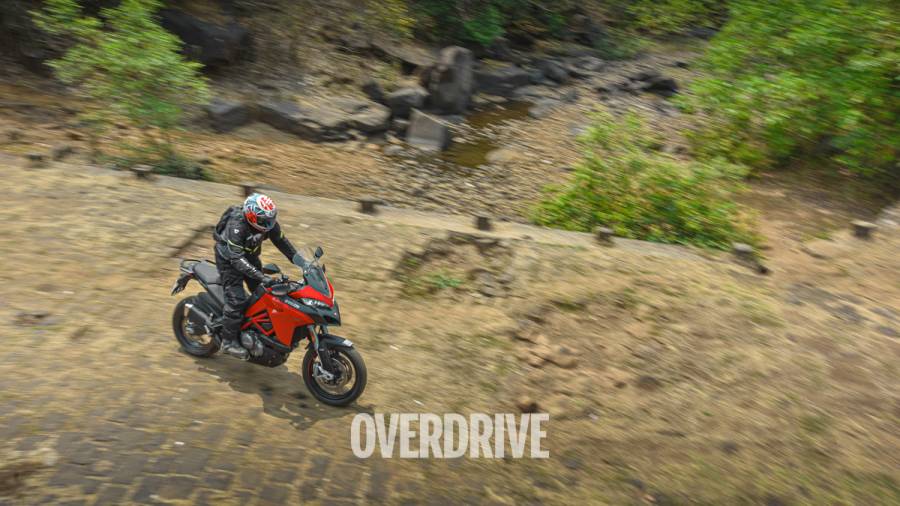 Speaking of the Tiger, the Multistrada doesn't heat up as much, but the frame still sits close to the rider's thighs and is sure to cook them well in prolonged bumper to bumper jams. But this frame is also responsible for making the Multistrada extremely agile and sharp. The turn-ins are quick and don't require a lot of effort at the bar, and even around tight switchbacks, it doesn't feel like a 230kg motorcycle that is trying to change directions. 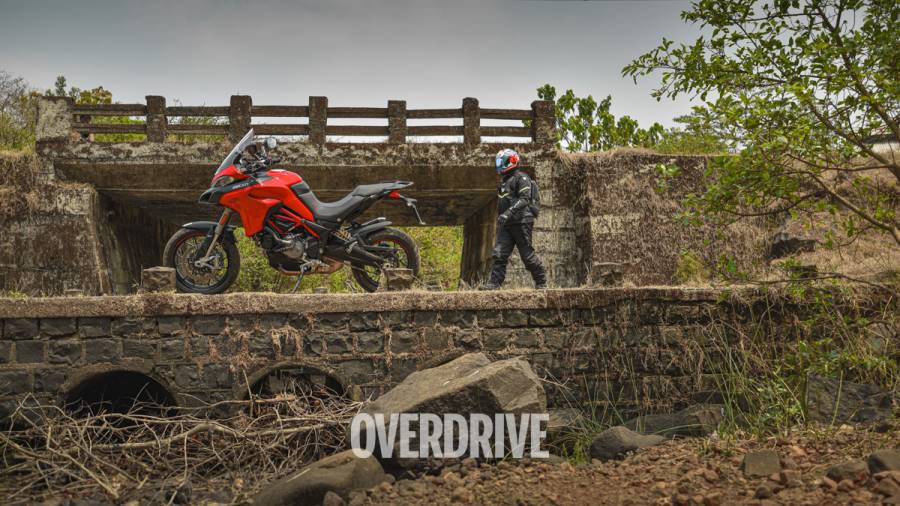 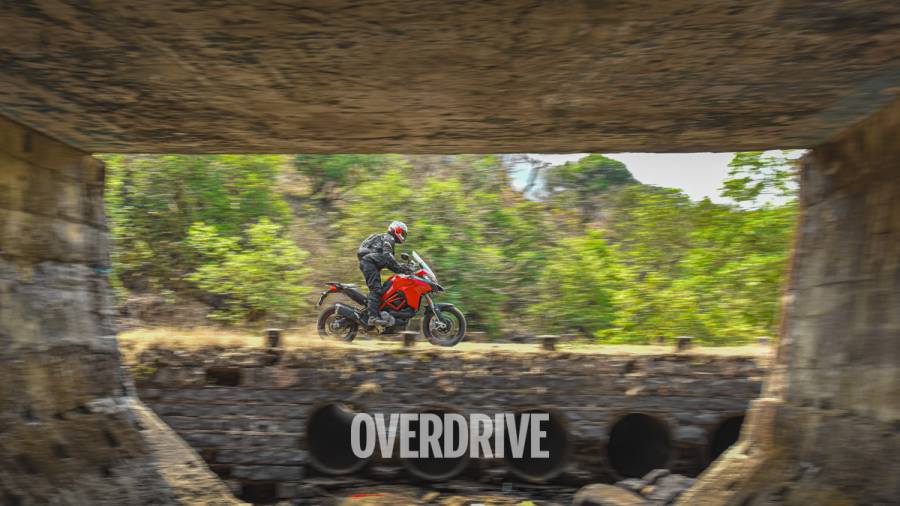 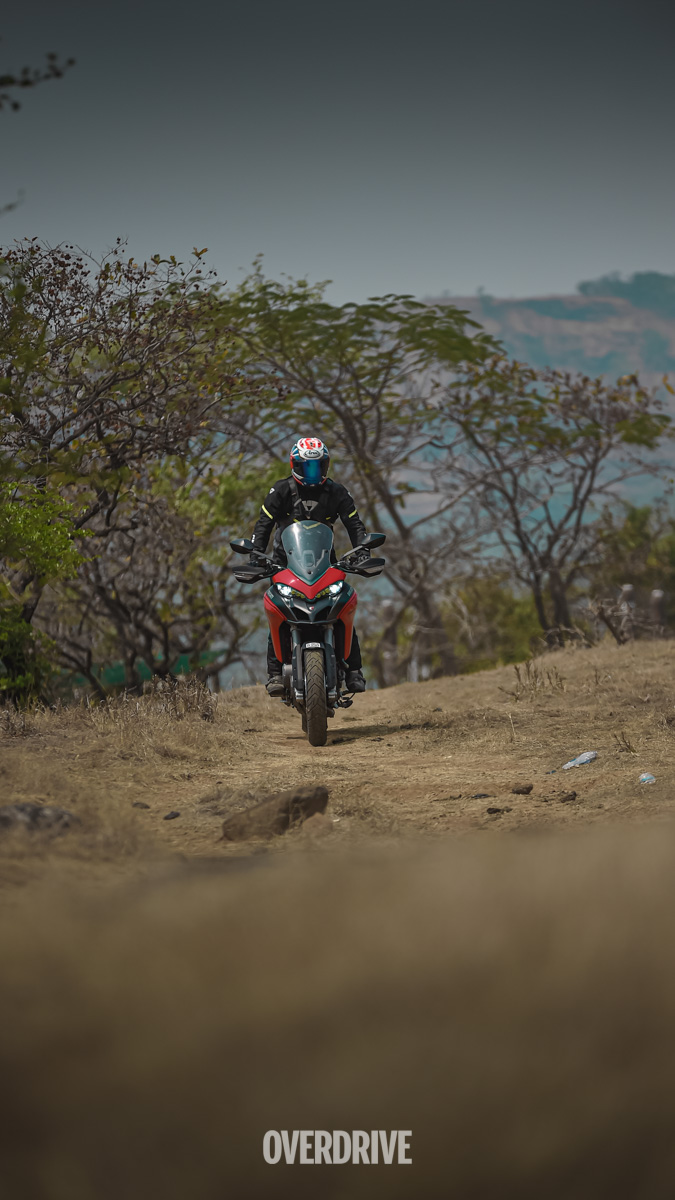 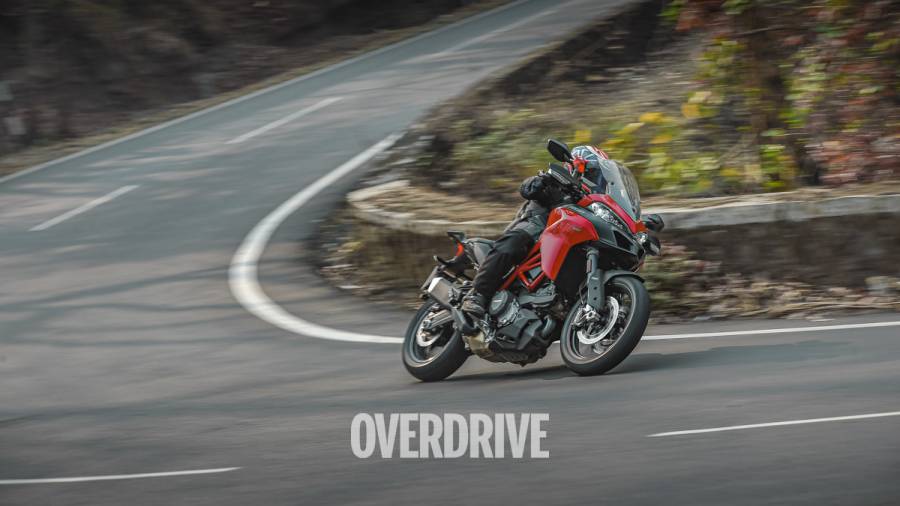 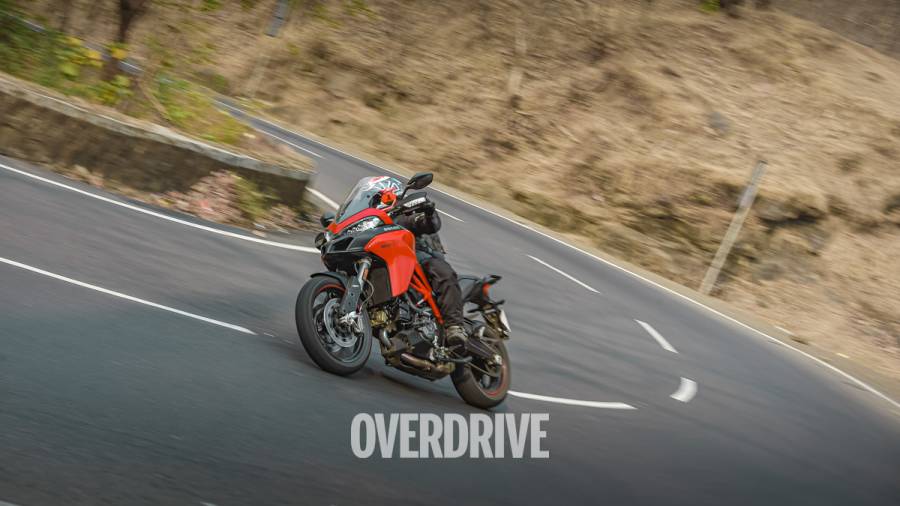 You have to keep the engine beyond the 3,000rpm though, as the fuelling feels choppy under this zone and robs the bike of all the cornering fun. Astonishingly, the handling manners of the Multistrada aren't hampered much even with a pillion and luggage, which highlights just how good the suspension is. My only grudge for highway use is the noisy windscreen, and even with a good set of earplugs, I couldn't get rid of the whistling sounds (on the cross as well as sports helmets). 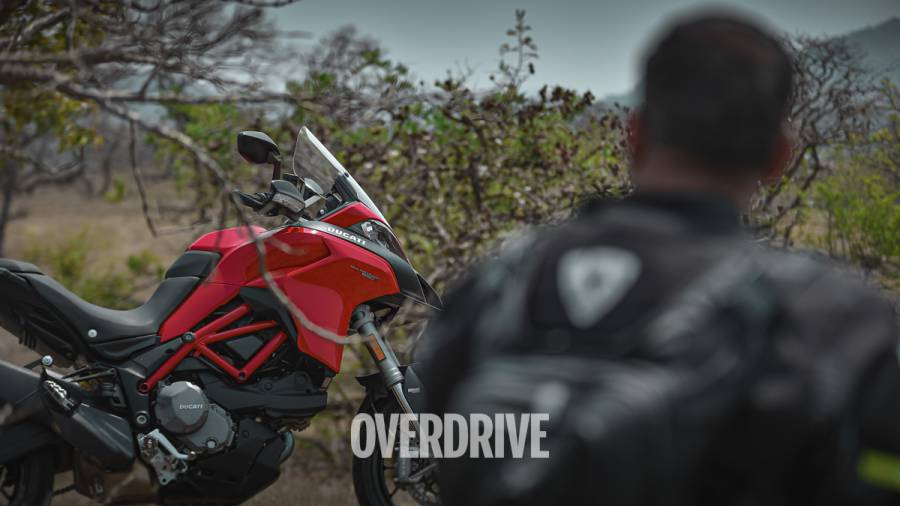 Verdict
The Multistrada 950S is an explosive package and since Ducati only has the S on sale at the moment, it comes at quite a price. Sure the Tiger 900 GT has a better scope with its off-roading capabilities and hardware and the BMW 900 XR feels a tad bit sportier in its riding ergonomics, but these competitors don't match the overall tarmac experience that the Multistrada 950S has to offer. Its superior electronics and suspension put in it a different league altogether and if you have the means to get one, I would certainly recommend it over the aforementioned bikes if a fast road tourer is what you are seeking.