The litre-class supersport machines are the quintessential performance icons, the flagship that every motorcycle brand shows off as their halo bike. At Kawasaki however, things are different for their flagship is usually a motorcycle that competes for the title of being the world's fastest motorcycle - the ZX12R, the ZX14R and now the H2. These flagships have often overshadowed Kawasaki's capable track tool, the ZX10R. But just because it is in the shadows doesn't mean it is any less capable. After all, it is a Ninja and one that knows how and when to strike. 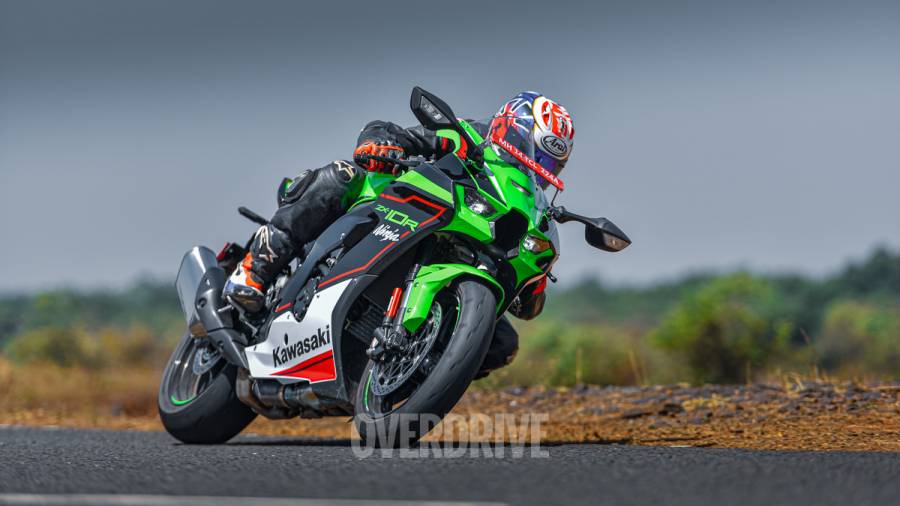 Design
One would naturally expect the technologies of a flagship to filter down to the smaller machines - but the H2 only lends its aerodynamic bodywork to the 10R and not the supercharger because the World Superbike Championship simply wouldn't allow it. That said, the engine and chassis of the outgoing 10R have won six championships in a row. Some might call it luck, but I would call it sheer domination. So if Jonathan Rea can achieve that feat without needing a supercharger, no one else has scope to complain about the lack of it in the new 10R. 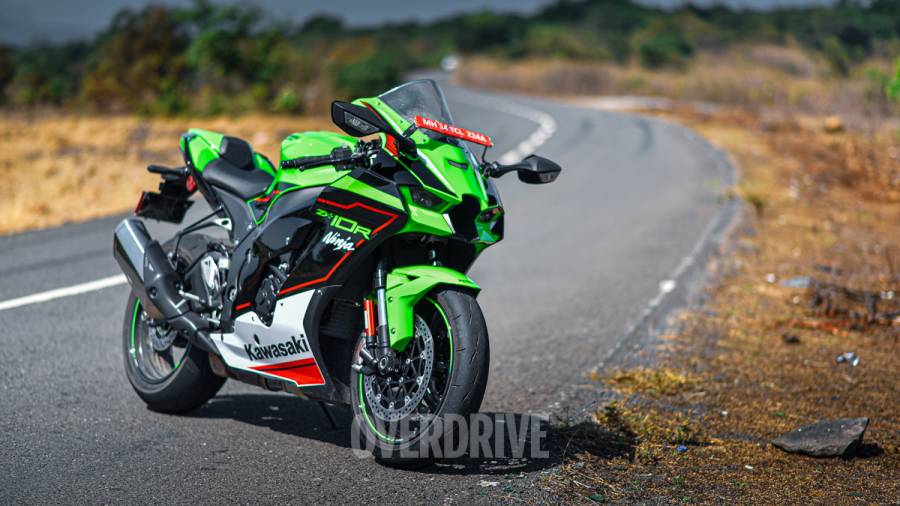 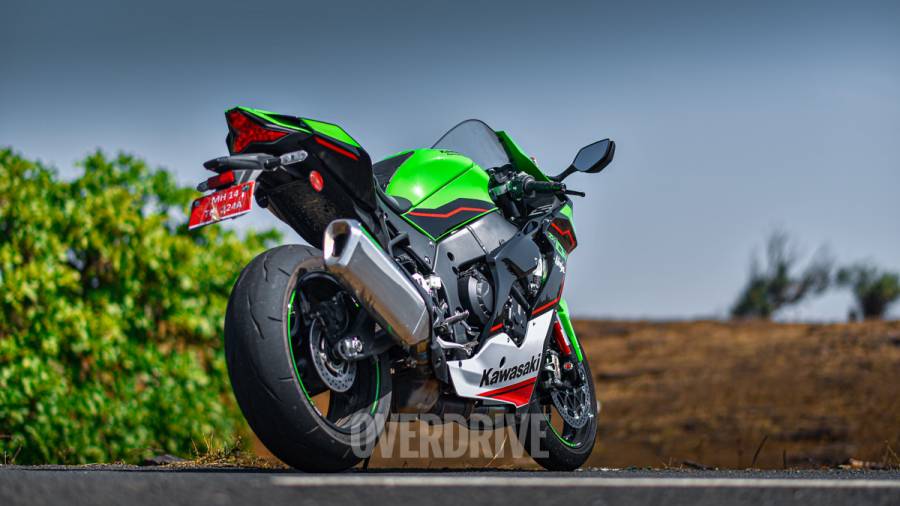 The design has hints of the H2 in its face, but the 10R places the ram air intake in the centre and flanks it with the tiny-eyed LED headlamps which have an exceptionally good throw, spread and illumination. The face is polarising, but to me, the new front end looks far sharper and proportionate than the bulkier face of the outgoing bike. 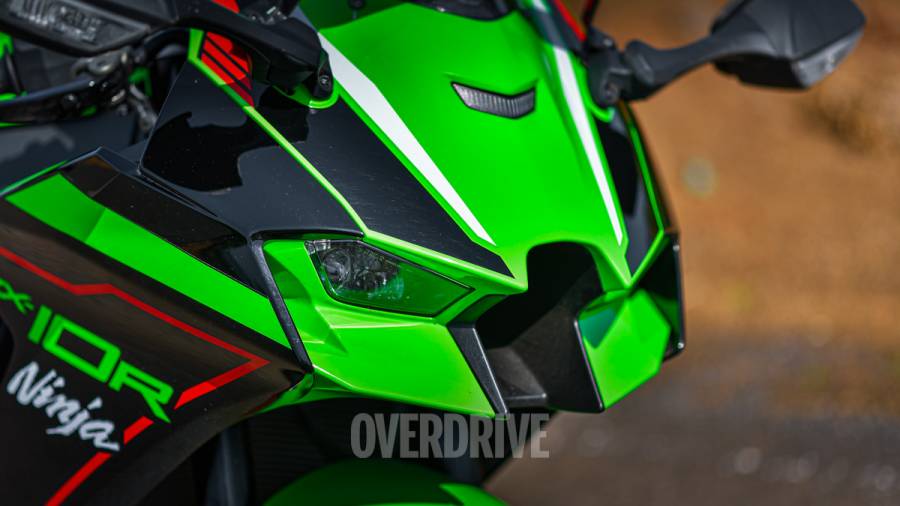 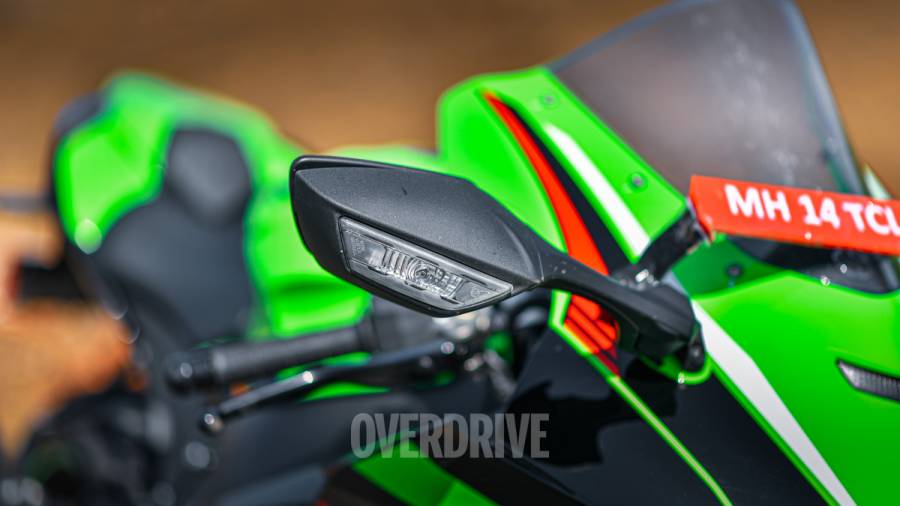 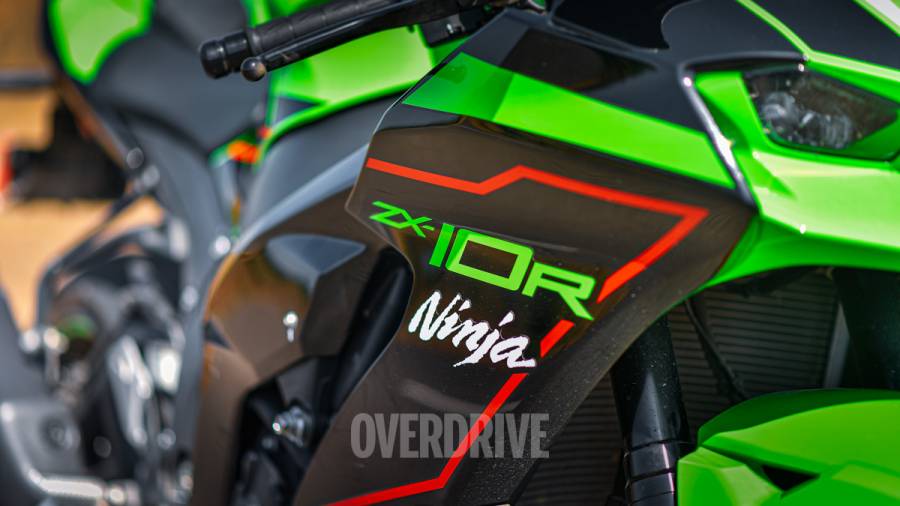 There is more function to this new form, too. The mean green machines may not have MotoGP connections anymore, but there is tech from the premier class racing, neatly integrated with that bodywork. Unlike the ungainly wings seen on most new supersport monsters, the 10R neatly integrates these next to the headlamps, with the exhaust for this airflow achieved with gills below the handlebars. 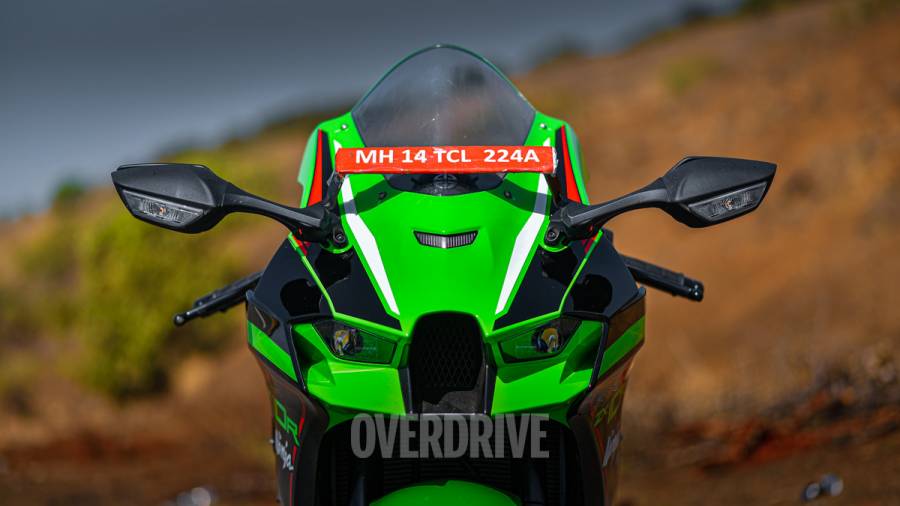 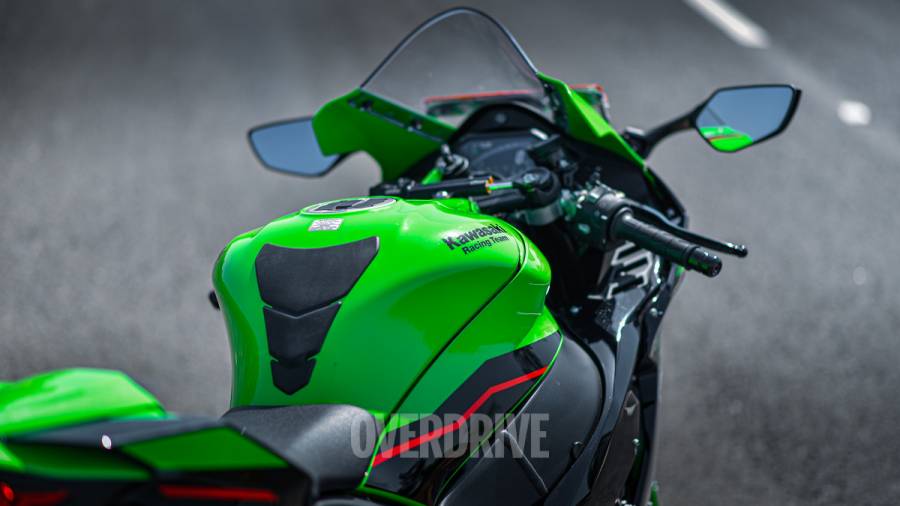 If you complained about the previous Ninja's front end feeling floaty while accelerating hard, the new one feels far more composed than before - and if you like numbers, the new venting creates 17% more downforce than before, while the new bodywork has 7% lesser wind drag. To that effect, the new visor gives you more headroom to tuck in if you are under 6 feet tall, and unlike the previous bike, it doesn't need vents around the screen to reduce drag and buffeting either. 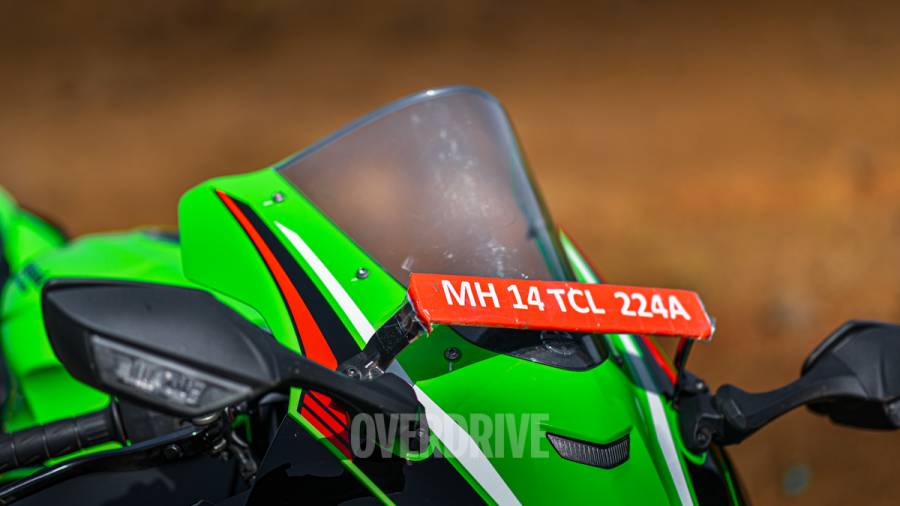 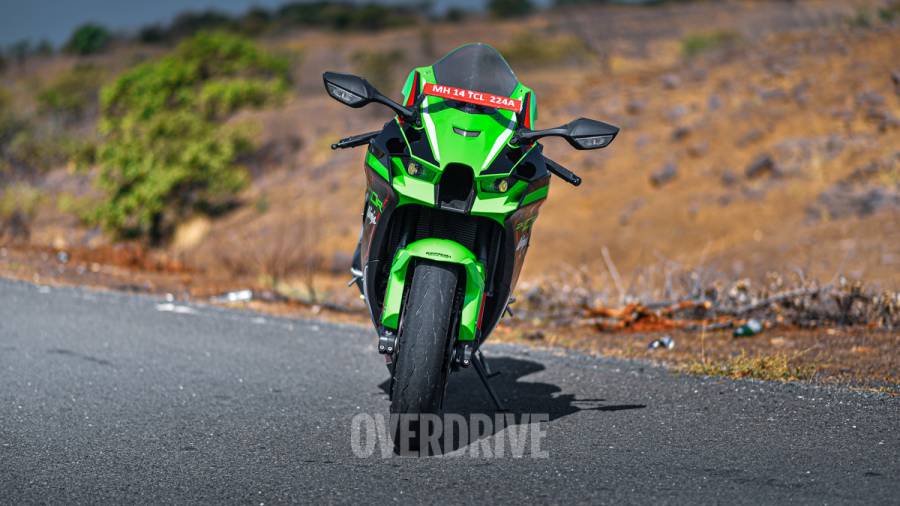 Deception is what Ninjas are extremely good at and the 10R follows in that tradition. The new bodywork and a decidedly softer low-end performance award the new 10R a tidier acceleration which makes it far more deceptive than before. You won't even realise that you are doing some ridiculously high speeds until you gaze at the new console. Speaking of, it is the same TFT dash that goes on most new Ninjas and it pairs with your phone via Bluetooth for stuff like call notifications and ride-logging. You can have a more track-oriented layout too if you like, but either way, the tachometer isn't as legible as the array of LEDs on the outgoing motorcycle. There is, however, a programmable shift light that sits right above it. 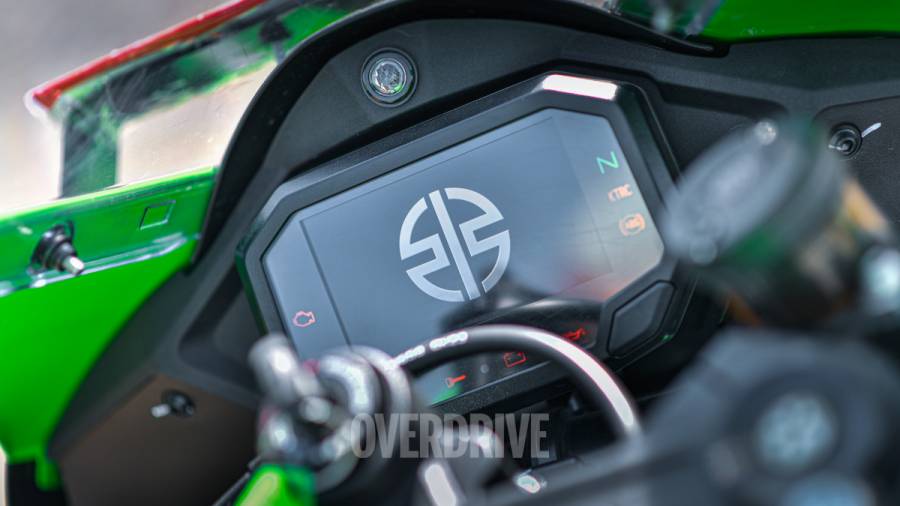 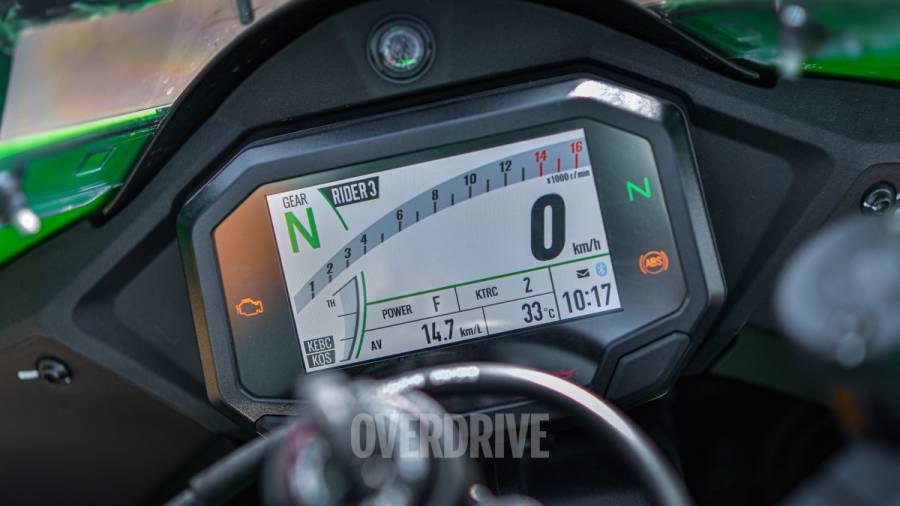 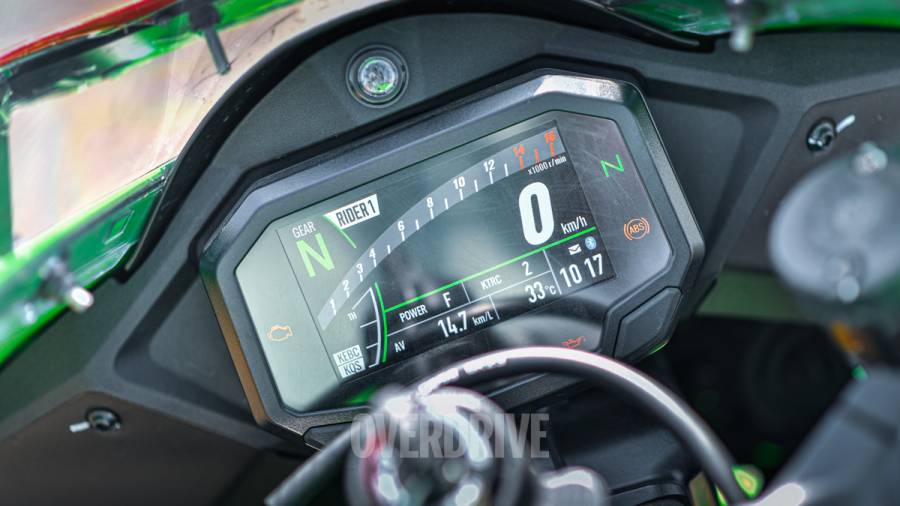 Chassis, Engine and Performance
Kawasaki has yet again gone with the "why fix it when it ain't broken" attitude and have carried over the engine and chassis with only minor changes. So if you think about it - the 2021 10R gets better aerodynamic efficiency thanks to the H2 and gets the mechanicals derived from the WSBK winning race bike. So there are plenty of things to brag about with the new Ninja. 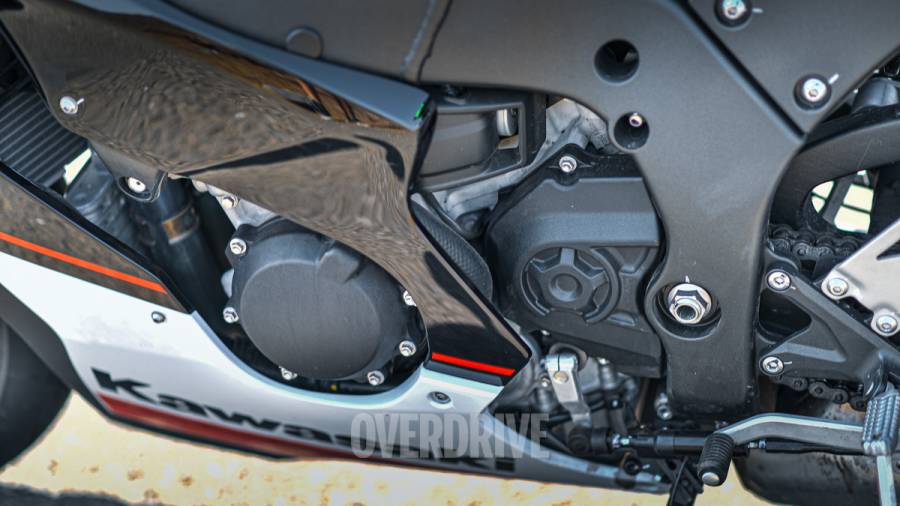 The engine is butter smooth like a typical Kawasaki four-pot mill, but thanks to the new emissions norms, it has also gone more silent than before. Add to it the softer low-end and the new 10R may not feel very wild from the get-go, but that has its advantages. For starters, it feels a lot more friendly for the street compared to most of its class rivals. The engine has been geared to make sure that the acceleration isn't overwhelming and also to preserve the tyres. The Bridgestone RS11Rs are sticky rubber for road and track and while brutal acceleration would make you laugh out loud, unevenly worn tyres mean that the handling characteristics won't feel great for long. 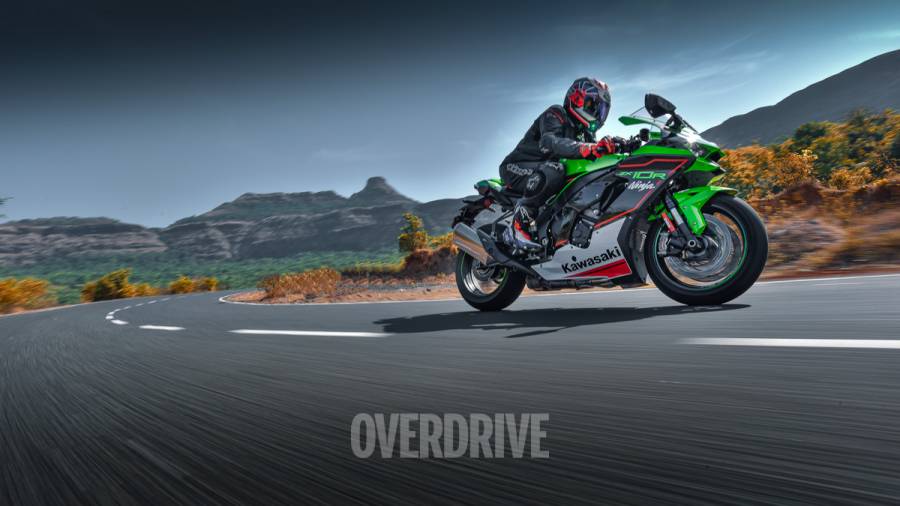 Should you need all guns blazing for drag races or race starts though - there is the Kawasaki launch control with three levels of adjustment. It is activated by simply pressing the Mode and the Select switches simultaneously. Engaging it limits the engine speed to 8,000rpm and once you gather the courage to dump the clutch, it will launch the bike towards the horizon with breakneck acceleration. 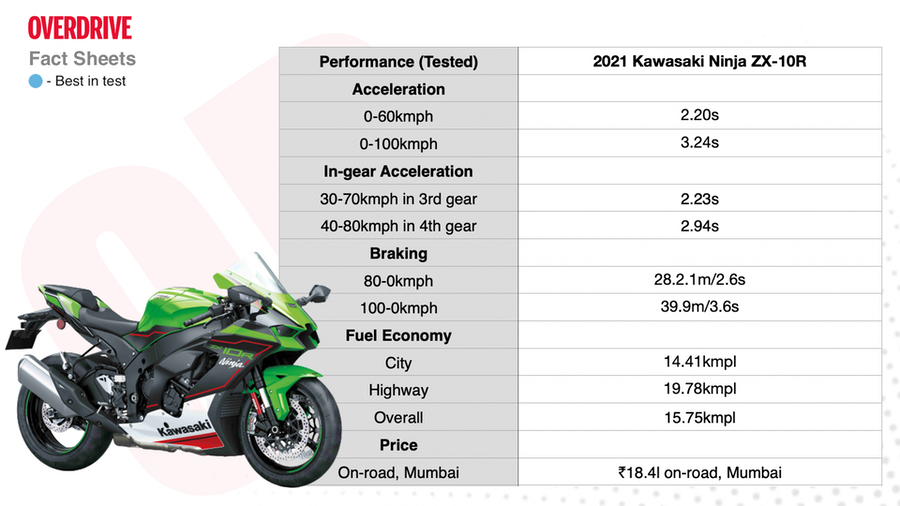 You can hit 100kmph in less than 3 seconds or 200 in under 10. I could only manage the sprint in 3.2s with the front floating. Any more runs and I would have probably burst my guts. 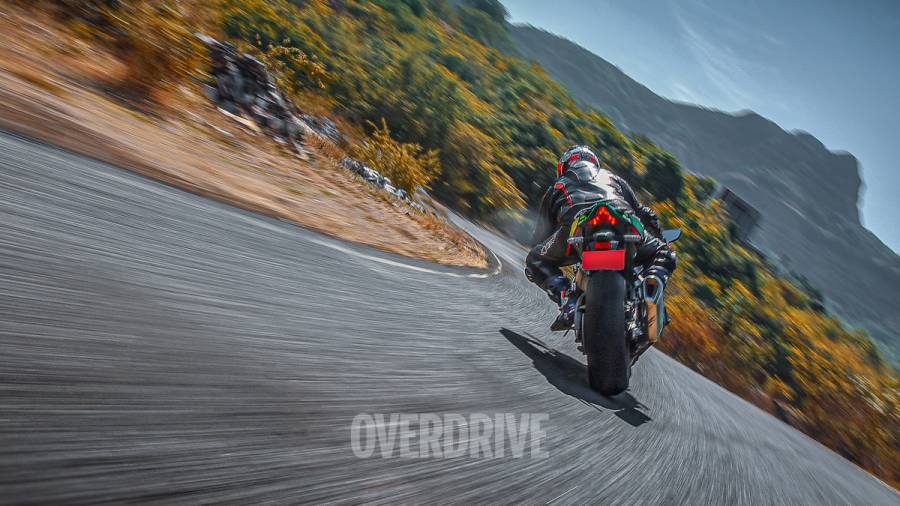 The fact that the 10R is still one of the most cramped and compact litre-class track tools out there, only makes it worse. It will take less than three seconds to tell you how unfit you are with all the muscles in your body starting to cramp up. If you have a lean racer-bod though, you could appreciate the revised ergonomics. The weight bias has been shifted 0.2% to the front, the seat is a bit steeper, the handlebars are flatter and moved forward, there are similar minor modifications to the trail, the footpegs have moved up and the swingarm is longer by 8mm and its pivot point has moved down by 1mm to achieve a longer wheelbase. These changes make for a more aggressive riding posture. You would have to ride the older and newer machines back to back to notice the changes at the front, and if the higher footpegs are too cumbersome, or the repositioned handlebars are making you stretch outing look up awkwardly, the solution is to simply get adjustable pegs and 'bars. 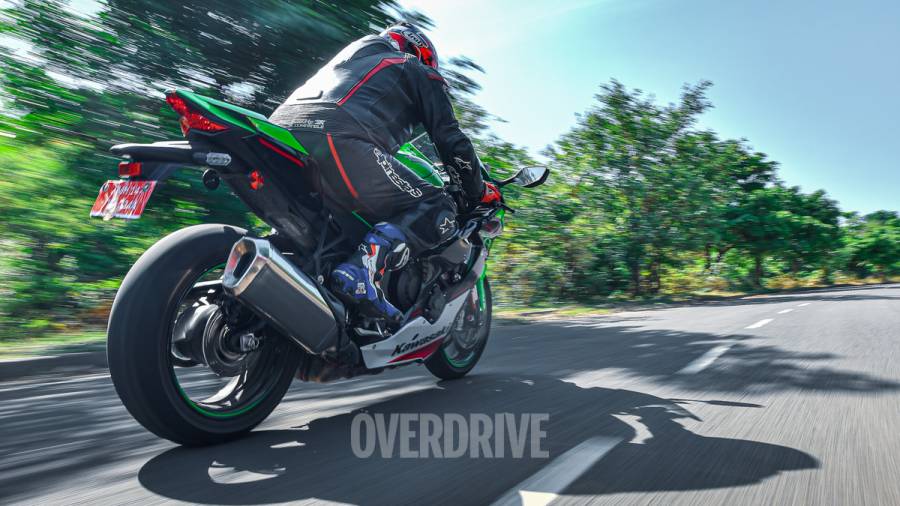 Further changes to the chassis elements come in the form of marginally softer fork springs and stiffer rear spring. Both ends of the suspension are fully adjustable and even out of the box you will be astonished at how well damped the feeling is for a supersport, without compromising on the track-worthy handling characteristics. I have had fancier electronic suspension feel bone jarring on some of the Ninja's rivals - but those can be adjusted by the press of a button, while the Ninja's suspension will need tools and knowledge. 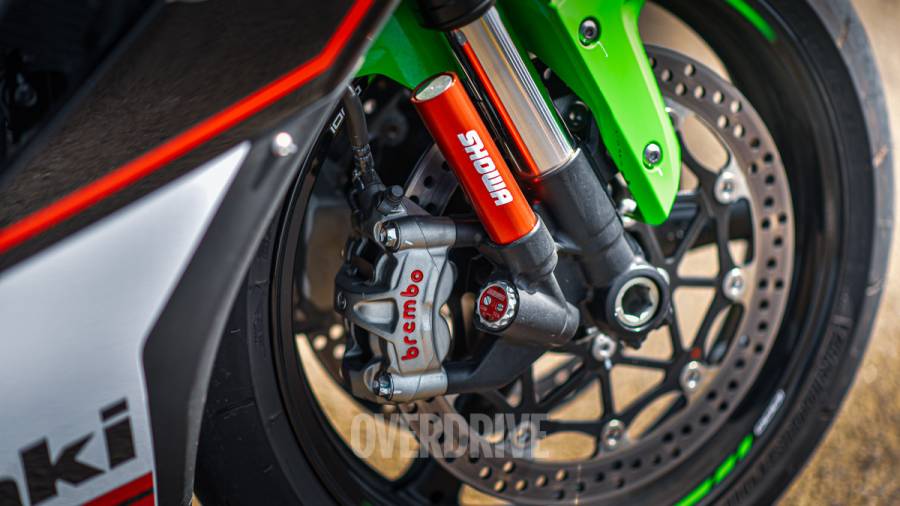 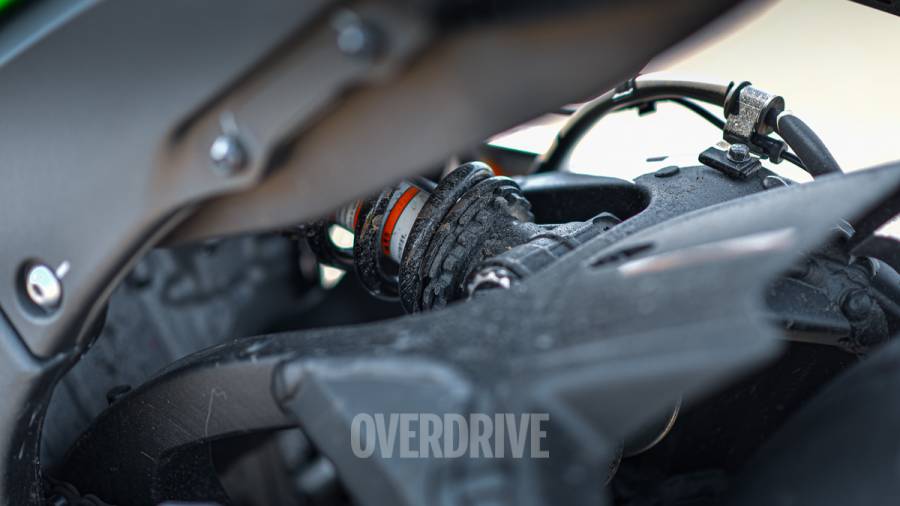 After all, Kawasaki can't give you everything at this price - can they? But they have still managed to blow the competition out of the water on this one. Despite being one of the most affordable litre-class machines out there, it has all the electronics that you can think of - the aforementioned launch control, lean-sensitive ABS and traction control, an electronic steering damper and even customisable engine braking control. Though I have found the latter to be a bit iffy and inconsistent with chips deceleration at higher speeds. The quick-shifter is one of the best I have tested so far, and even at slow engine speeds, clutchless shifts don't feel clunky. There is cruise control too if you want to nurse your wrists or the muscle aches. So the bottom line is, the 10R is loaded to its gills whether or not you like silicon trickery and having all of this at this price point simply makes its class rivals sound illogical. 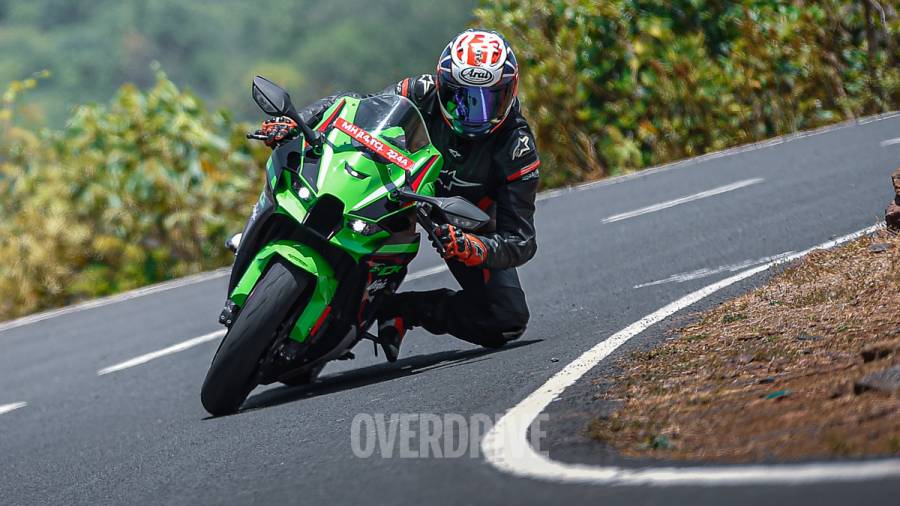 So how does it all come together? Exceptionally well! The Ninja is easily the most friendly litre-class supersport for the road - it soaks in all the bumps surprisingly well, brakes well even on undulated surfaces and on the smoother patches of tarmac it drops the anchor with authority. Interestingly, you won't have to summon these brakes as often as the ongoing model to get a surefooted turn-in for a corner. The revised geometry makes the new 10R significantly nimbler and sharper than before, needing much lesser effort to chuck this monster into a corner. The tyres have exceptional grip too. The 10R tips the scales at 207kg which makes for an immensely enjoyable power-to-weight ratio, yet it feels far more manageable than a BMW S1000RR or a Ducati V4S making it a more balanced litre-class supersport for road and track use. 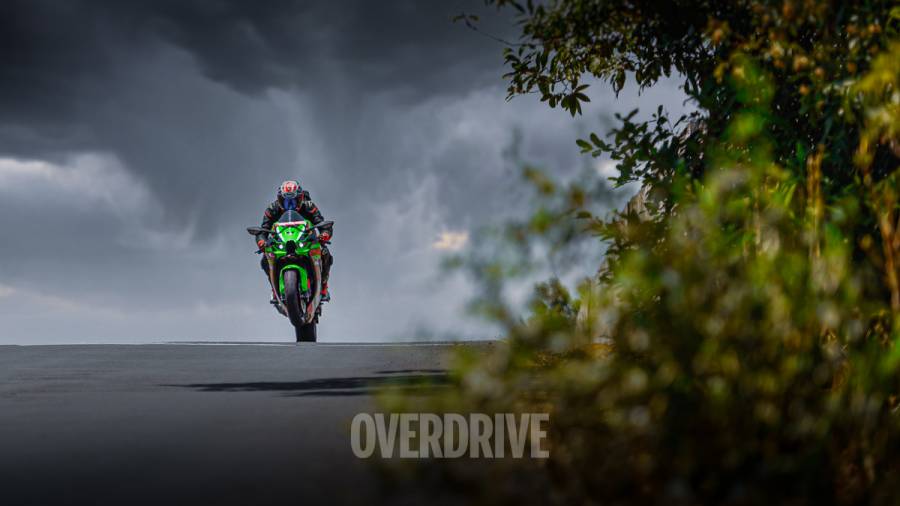 Verdict
Sure, a 2021 litre-class track tool ought to have shipped with Brembo Stylema callipers instead of M50s, but their performance won't leave much room for complaint. Ditto for the suspension, which is all mechanical and devoid of silicon trickery. But the price of the 10R certainly leaves a lot of room for upgrades, if you want the best equipment in the business. At that price, it doesn't feel like a compromise either. 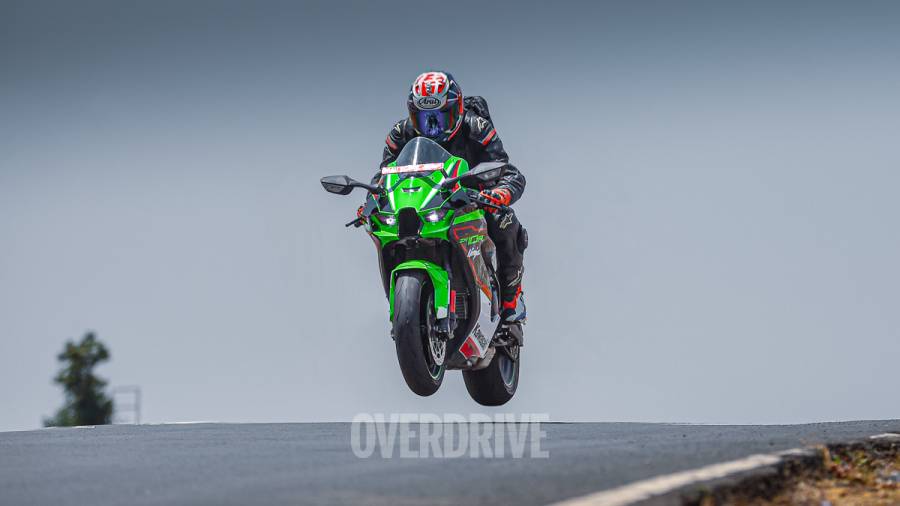 It is deceptively fast and does feel like a 213PS motorcycle whether or not you exploit the ram-air induction. Sure, your supersport buddies who probably paid a fortune for their 'blades or European exotics would joke about the tail end which (like the engine and chassis) is still so much like the outgoing motorcycle, but you can rub it in their face by making sure that this taillight is all that they will ever see on the track - because the Ninja is certainly capable of doing that. You don't have to take my word for it, simply tune in to the WSBK and let Jhonny Rea do the talking.