It's hard not to be drawn in by the numbers with the Mercedes-AMG A 45 S 4Matic Plus. A mouthful of a name aside, this smallest of the top-rung AMGs makes some lofty promises in the spec sheets. It was until recently the fastest accelerating hatchback in the world with a 0 to 100 kmph time of 3.9s, and more tellingly, achieves this using the most powerful four-cylinder engine ever fitted to a production car. Then there's every manner of the newest electronic and chassis trickery that AMG has been able to muster in its relatively diminutive size. So does this barrage of technology shine through on the move to make the A 45 S anything more than the most potent hot-hatch you can lay your hands on? We spent a frustratingly small amount of time driving the A 45 S around the high-speed track at NATRAX. The brief was to hit the 270 kmph true top speed of this super-hatch around this bowl, which if you've read of our earlier exploits here, isn't as challenging as it sounds. Nevertheless, the A 45 S was still a revelation.

This, in true AMG fashion, is largely down to the M 139 motor. The engine, with 421PS and 500 Nm, dominated the driving experience in the time we spent with the A 45 S. There is an unbroken surge of performance right from above idle to the high 7,200 rpm redline. Most impressively, unlike every other engine of this type we've driven so far, this build-up seems to grow in intensity as revs climb. It doesn't seem to fade away after a strong mid-range surge as most small turbocharged engines tend to. Unsurprisingly, peak torque comes in a naturally-aspirated like 5,000-5,250 rpm and peak power even later at 6,750rpm. Cycling up the drive modes as we prep for the high-speed run, the motor seems to level up this intensity as we get up to the Race mode in some sort of mechanical crescendo. 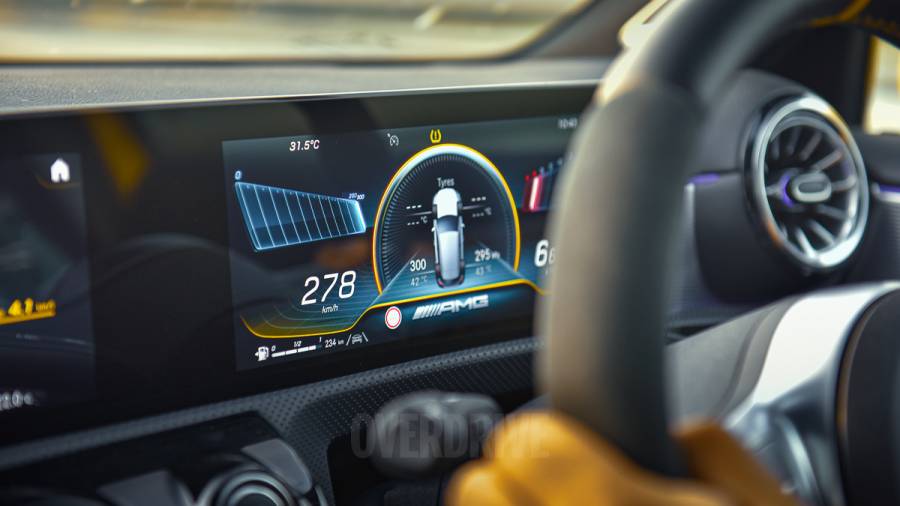 Hitting the displayed 278 kmph top-speed(speedo-error adds the extra 8 kmph) is all too easy. Here, the breadth of performance this engine offers is staggering. There's still about 2,000 rpm left to play with when we hit the limiter and a nudge to the throttle actually makes the A 45 S downshift! Even with this being one of the most power-dense engines on sale today, we suspect there's still a lot more to come from this engine in the future. 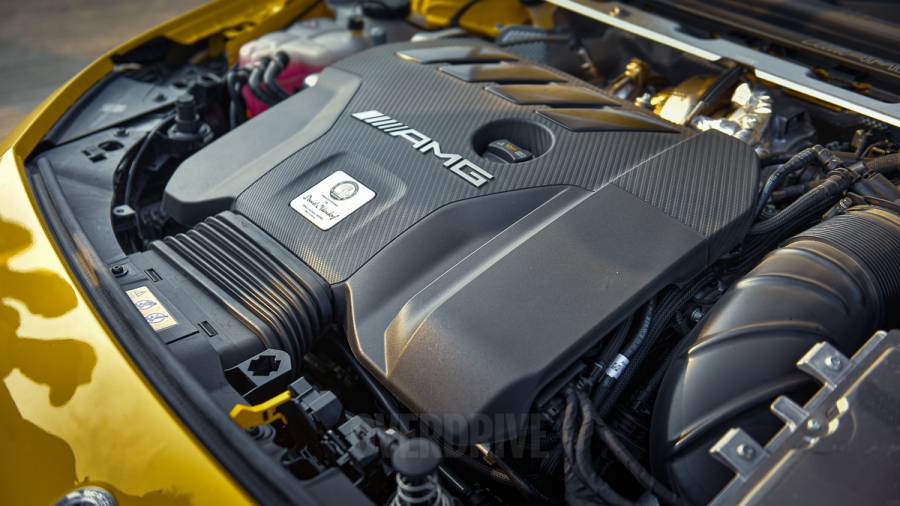 But these top-speed shenanigans seem all too easy for the AMG A 45 S. This super hatch seems to quite literally come alive when you slow down(relatively) and interact with the powertrain more closely with the paddles. Much of the development around this engine has centred around negating the slow responses expected of a highly-strung engine such as this one. To this end, very little, if anything at all, is carried over from the tamer 35-series cars. The front-driven architecture remains but the engine has now been rotated end-to-end so that it can breathe easier. A more responsive turbocharger and two-stage fuel injection provide colossal performance while the internals have been beefed up and the exhaust system optimised to improve efficiency and sound. 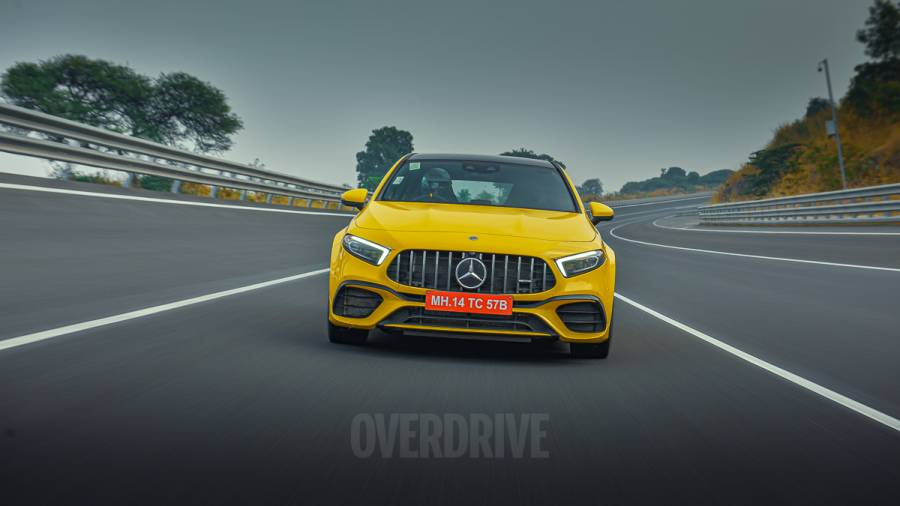 In practice, this translates into an almost limitless well of in-gear performance. The A 45 S will accelerate hard deep into triple-digit speeds, accompanied by an almost cartoonishly exaggerated four-cylinder grumble which ends in pops and crackles from the exhaust. The sound itself makes this an event, but the immediate reactions from the gearbox and engine are central to the experience. The AMG-developed eight-speed DCT is razor-sharp in its responses. There are no perceivable delays even when you ask for downshifts high up in the rev band and when left to its devices, it will drop you right in the middle of the powerband, a gush of acceleration at the ready. Similarly, the variable-ratio steering, throttle and brakes exude a sense of precision and volume that we've experienced in cars much higher up the AMG hierarchy. We can't tell you much about the ride and handling character of the Mercedes-AMG A 45 S, although the all-wheel-drive system can send up to 80 per cent of the engine's torque to the rear axle whenever needed, with 50 per cent going through in regular operation. The torque can further be split through a pair of clutches on the rear axle to each wheel, allowing even more precise power delivery. This ties with the drift mode the A 45 S come with as standard, which seems to work as intended. A demonstration showed us the small AMG will happily do doughnuts and long four-wheel skids if you want it to. 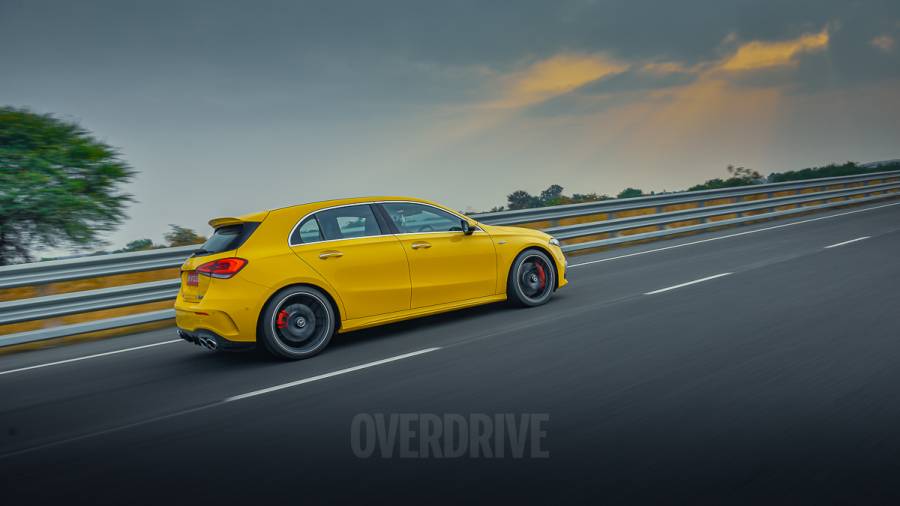 Combined with the 245/35 R19 tyres and relatively shorter wheelbase under the widened, heavily reinforced chassis, the A 45 S was completely unfazed through everything we put it through. The car stayed level and sure-footed at v-max or when making the quite abrupt transition to the banking at 250 kmph. The A 45 S also comes with the full suite of AMG's damping control and traction modes, so whether on a race track or a fun ghat section, we think this car could be more than a handy pair of wheels. 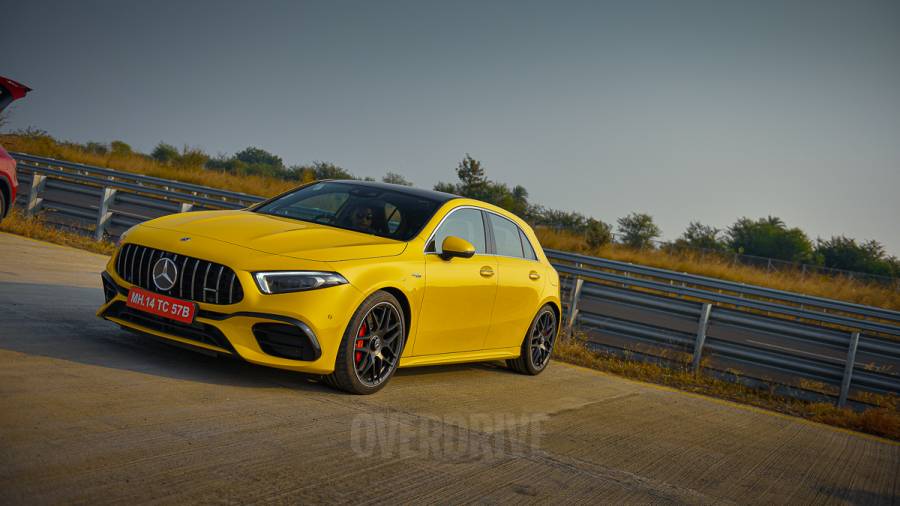 The Mercedes-AMG A 45 S backs up the thrills with quite a discreetly purposeful look. The Panamerica grille with the beefed-up bonnet and front arches when seen with the more cohesive hatchback shape give the A 45 S a noticeably more committed stance than the A 35 sedan. Then there's the usual smattering of AMG bodywork upgrades like the slatted air dams and the more pronounced splitters and diffusers, topped off by the big quad exhausts(enlarged on the S version). We don't get the aero package with the gloss black add-ons and oversized wing or the more sinister looking Night package yet in India, but the 19-inch forged wheels with the massive discs round off quite a looker. 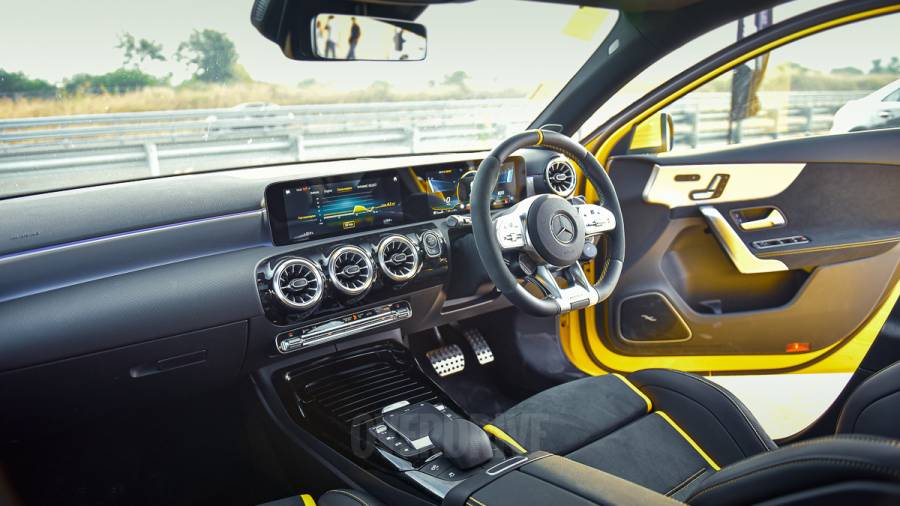 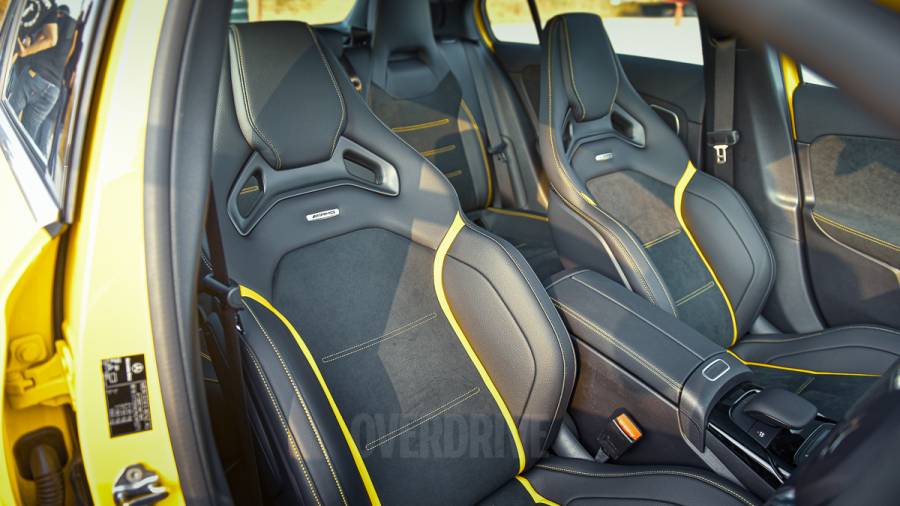 The usual cabin enhancements seen on the highest-rung AMG models find their way to the A 45 S too. So while the general layout and controls are the same as in the A 35 and the A-Class Limousine, the ambience is far richer with the suede-like trim on the doors, seats and the steering wheel, the latter an AMG-specific unit with the now common rotary dials. The rubberised dash surfaces and the yellow stitching on the more supportive sport seats are some other striking details. The features list has been significantly expanded as well. There's a HUD, a 12-speaker Burmester audio system and ADAS functions like blind-spot monitoring and lane-keeping assist. A 360-degree camera is conspicuously absent, which would have been especially useful in traffic in a low-slung, wide car such as this one. The Mercedes-AMG A 45 S is priced at Rs 79.5 lakh in India. This seems a steep hike over the A 35 even with this being a CBU and given the hatchback shape, but that's missing the point a bit. With this car, the shape comes after the fact. The performance on offer is levels above what the A 35 delivers not just in terms of outright speed but in every interaction that you make with the car. In our limited time with the A 45 S we noticed a tautness and energy here that we've only seen in sports cars well past the Rs 1 crore mark. The Mercedes-AMG A 45 S 4Matic Plus is a hit in our books because it doesn't just make the numbers, it makes achieving these a close, interactive experience.

26 May 2022
View All Videos
Advertisement