We wouldn't want to be in your position if you are in the market for a mid-sized SUV in India. With a litany of closely-matched choices that cover most powertrain options and feature sets, it's pretty much the core of the Indian car industry right now. But, electrified options have been stark in their absence. 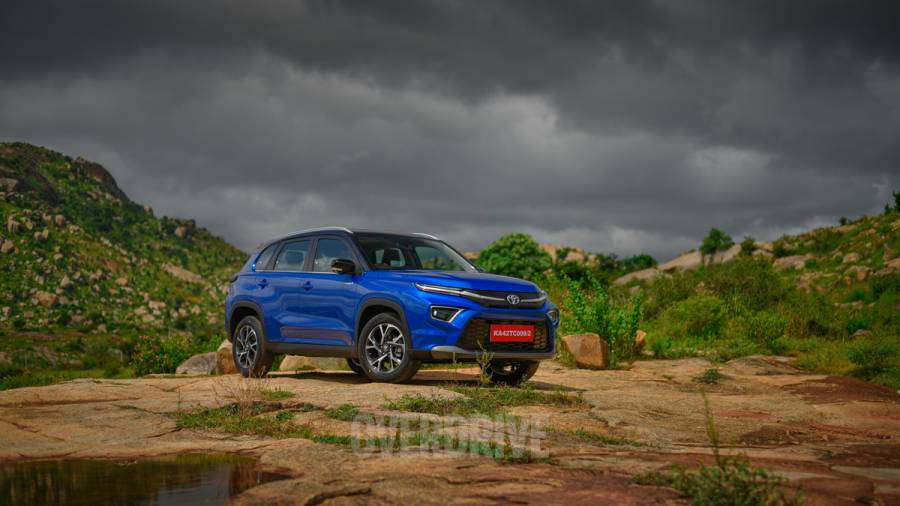 The Toyota Urban Cruiser Hyryder addresses that. It's the first hybrid in this segment, and equally significantly, is the first mainstream hybrid SUV to go on sale in India. How much promise does it show then?

The Toyota Urban Cruiser Hyryder is 4,365mm long, 1,795mm wide and 1,645mm tall. This puts it right in the ballpark of its Korean rivals, but slightly larger than the European competition. In-person, the Toyota's design isn't as extravagant as some rivals but it conveys presence and there's a poise to it that is quite appealing for an SUV of this size. Especially if you pick a bright shade like this blue. 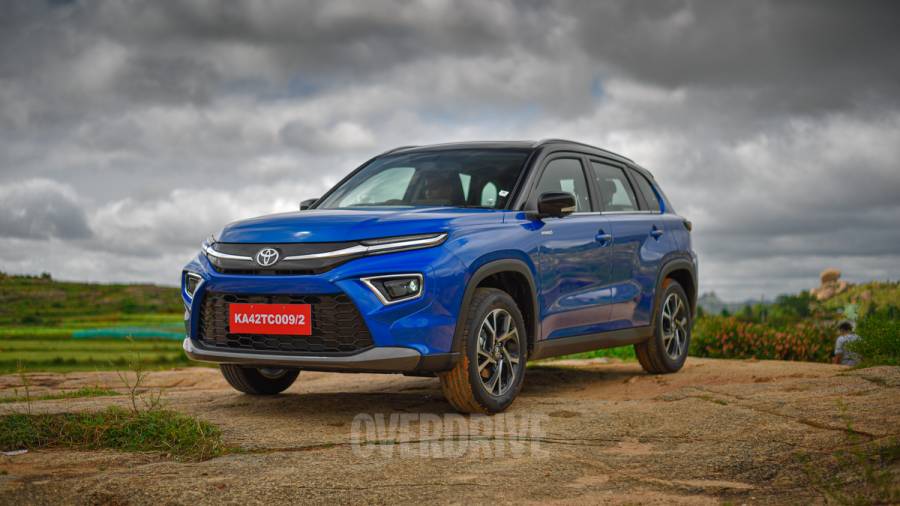 The front end with the now quite common split headlamp treatment takes cues from Toyota's larger SUVs available globally. There's just the right amount of chrome running through the split DRLs and the carbon-fibre-themed top element is a neat touch too(specific to the hybrid). Even the large, low grille flanked by the small headlamps and the crisp grey lip below look proportionately executed. The prominently bulged bonnet adds to this aesthetic. Toyota says the headlamp placement negates the need for front fog lamps. The side profile, which the Toyota shares with the near-identical Maruti Suzuki Grand Vitara, is more subtly done with simple surfaces and a discreet haunch. The 17-inch alloys are the segment norm and again look contemporary with the dual-tone look. Although we do think that panel gaps, though consistent, could have been tighter. We also noticed some misaligned panels around the boot shut line. Otherwise, the rear too carries over this general sense of being contemporary but not flashy with its rich LED detailing for the taillamps and simple chrome. Again the grey elements in the bumper stand out as do the unique vertical placement for the indicators.

Another child of the Toyota-Suzuki alliance, the Urban Cruiser Hyryder is based on the same Suzuki Global C architecture you find underneath the smaller Brezza, enlarged here to the same 2,600 wheelbase as the S-Cross. 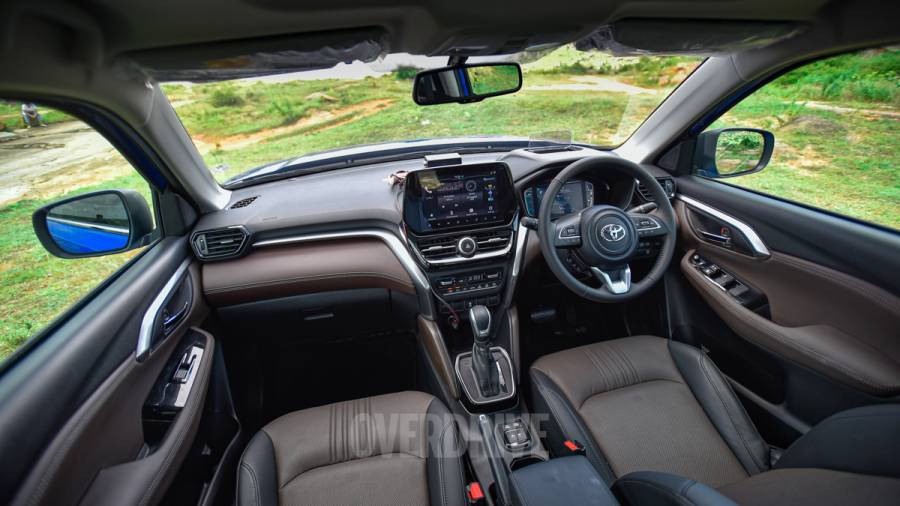 But you wouldn't know it when you step inside the Hyryder. To start with, the doors shut with a fairly convincing thud. The ambience here, again like the outside, may not be the plushest in this segment but it still is a big step up from anything we have seen from Toyota or Maruti Suzuki at this price point before. The layered dash with its Fortuner-like central treatment looks contemporary but more pleasing are the wide swathes of brown soft surfaces(all black in the non-hybrid variants). This material covers most of the common touchpoints lending a significant boost to the perception of quality here. The 7-inch digital instrument cluster also helps with this feeling with its crisp but functional display and informative menus and data. 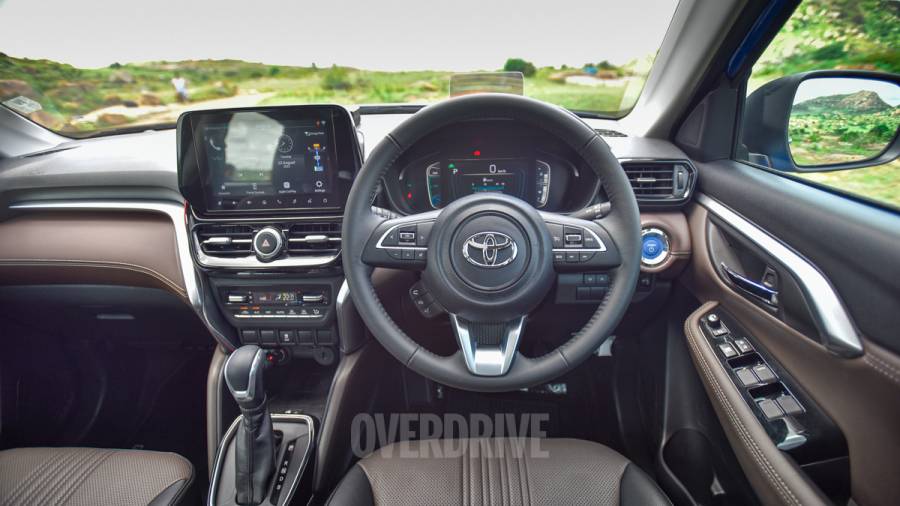 These go some way in covering for the bits we don't like. Much of the switchgear and controls have been lifted straight off cars like the Baleno, apart from the ones for the seat cooling and starter button that comes clearly from Toyota's parts bin. They work and feel perfectly alright and by any stretch will last long enough too, but some greater differentiation would have set these more premium cars apart further. We also would have liked a finer texture for the black plastic that you find in the lower half of the dash. 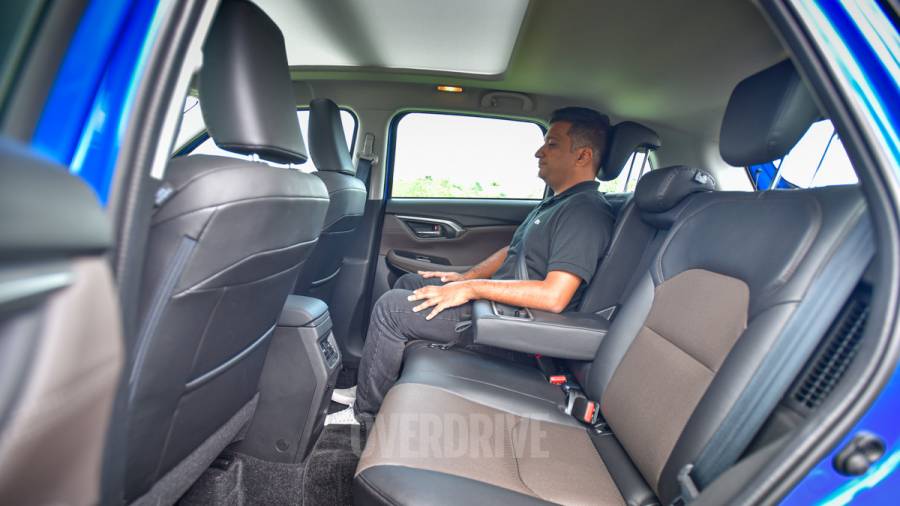 Look past these small misses and there's more good news with the Urban Cruiser Hyryder. Space is right up there with the best in this segment. The front seats are wide, supportive and well contoured but some might find that the split cushion for the backrest is a bit intrusive. And while the footwells are deep, we found our knees fouling with the centre stack quite often. The seats are somewhat similar at the rear but there's good support here too with the space being comfortable for three medium-sized adults. There's quite a bit of knee room and under-thigh support isn't lacking either. You even get a recline function which in the more upright position is a touch too straight and best only for freeing up more boot space. The party trick with the Hyryder though is its big panoramic sunroof, which happens to be dual-pane in the truest sense! The shade for it though, could have been of a far nicer material.

As for storage spaces, most of the door pockets are large and useful and you have enough in the way of cubbies. If anything, a single USB port at the front seems limiting. With this hybrid version of the Hyryder, you also get a smaller boot(approx. 300 litres). But what is there is well managed with a removable flat floor and wide opening. 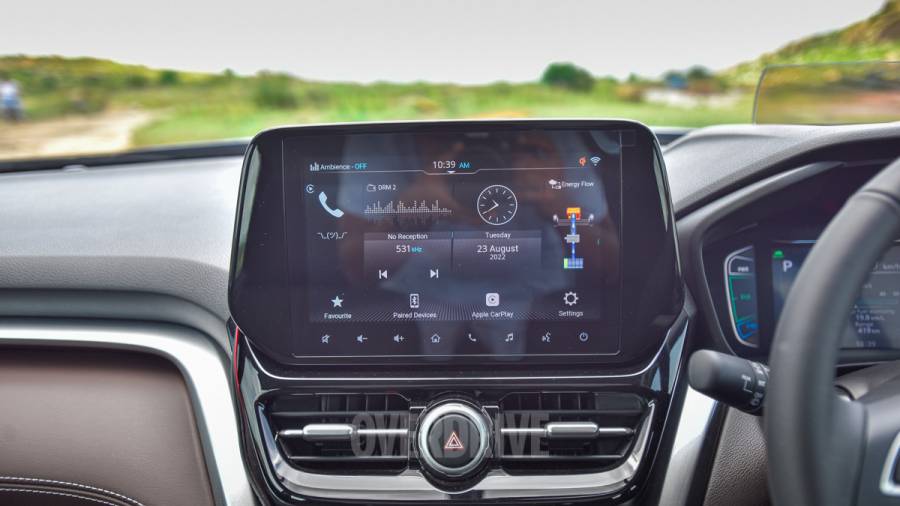 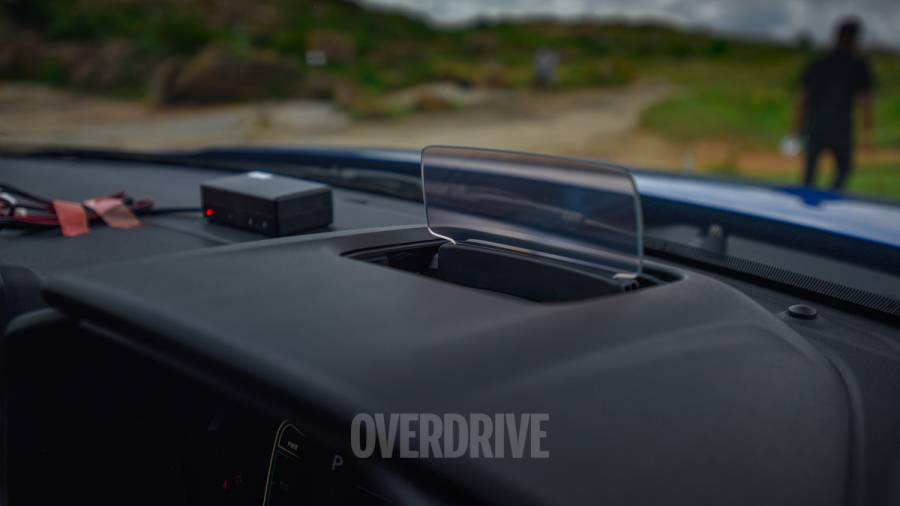 The Toyota Urban Cruiser Hyryder does reasonably well with the features it offers. You get the same 9-inch screen that we've seen in recent Maruti Suzuki cars but upgraded here with wireless Android Auto/Apple Carplay as well as Toyota's suite of connected-tech features. There's also the informative HUD display as well as cooled seats and auto headlamps. But we think there should have also been rain-sensing wipers and a powered driver's seat, considering the competition this SUV is up against.

The Global C platform is a robust one by all accounts and that should continue with the Toyota Hyryder too. As for safety equipment, you get six airbags, an auto-dimming rear-view mirror, 360-degree camera, a middle 3-point seatbelt for the rear passenger, TPMS and ISOFIX child seat mounts, putting this Toyota in largely good stead although we think a five-star NCAP rating will be a reassuring addition.

Toyota's hybrid system in the Urban Crusier Hyryder uses a 1.5-litre petrol motor that puts out 92PS and 122 Nm. That is paired with an 80PS and 141 Nm electric motor via a CVT for a combined 116PS. The electric motor is fed by a small battery pack that uses regen and the engine to charge up. The Hyryder always starts up in EV mode, and will stay in this mode at say parking or crawling traffic speeds until the battery is depleted. 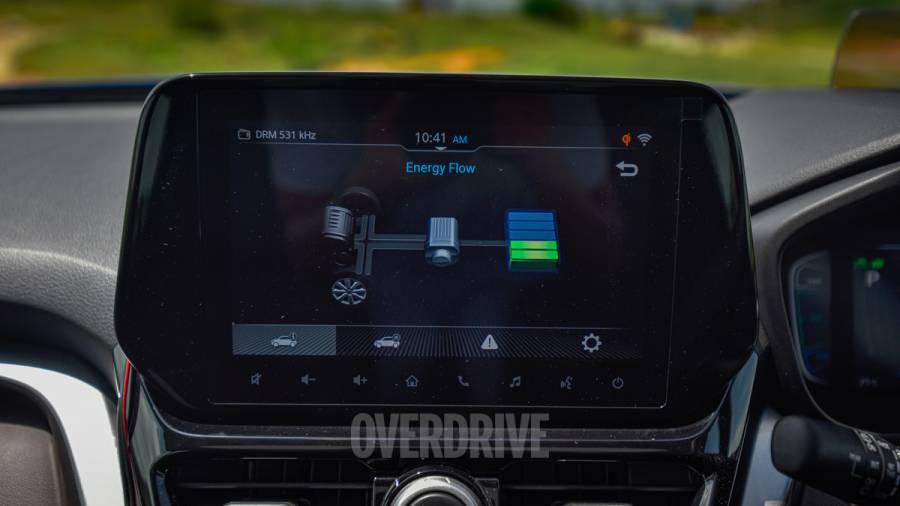 The engine only cuts in when you ask for more power, supplementing the electric motor and charging the battery at the same time. At full-bore acceleration, the engine and motor work in conjunction to deliver maximum performance. A power control unit and a power split device work together to manage the two motive sources most efficiently, even allowing the engine to cut out at highway speeds if there's less load on the drivetrain. Toyota says you can drive up to 60 per cent of the time on electric power alone, which we think is a fair claim.

One of the Toyota Urban Cruiser Hyryder's best attributes is the way it makes this quite complex-sounding hybrid feel natural on the road, in this Suzuki-derived architecture. There's something quite soothing about starting in complete silence, and with the instant torque crawling along is done without the usual jerks and drones of a combustion-engined car. Then when the engine does kick in, the switchover is completely seamless. 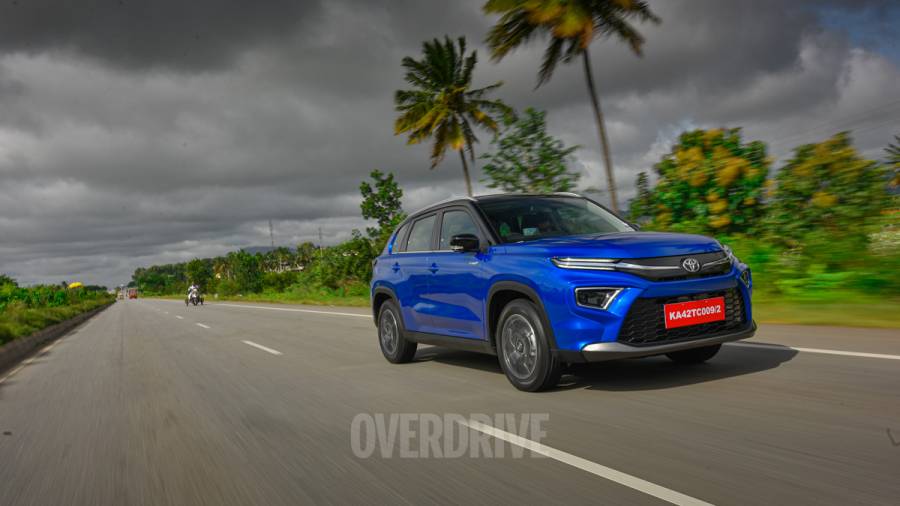 Here, performance is more forthcoming than the 115PS power output suggests. Although those looking for the mid-range thrills of a diesel or turbo-petrol will be left wanting. The Hyryder hybrid is just quick enough to not feel like a laggard in faster traffic or during overtakes. A combined torque figure isn't available but it is estimated that you have at least 180 Nm at your disposal at all times. The 0 to 100 kmph time of 12s isn't a fully accurate depiction of the SUV's pace, since here the motor and engine are fully occupied with powering the wheels. You get three drive modes but we think sticking to the Normal mode will cover most of your needs, since there isn't a significant variation in how they make the SUV feel. Our only real criticism here is that the engine is quite noisy which takes away from the otherwise calming driving experience. 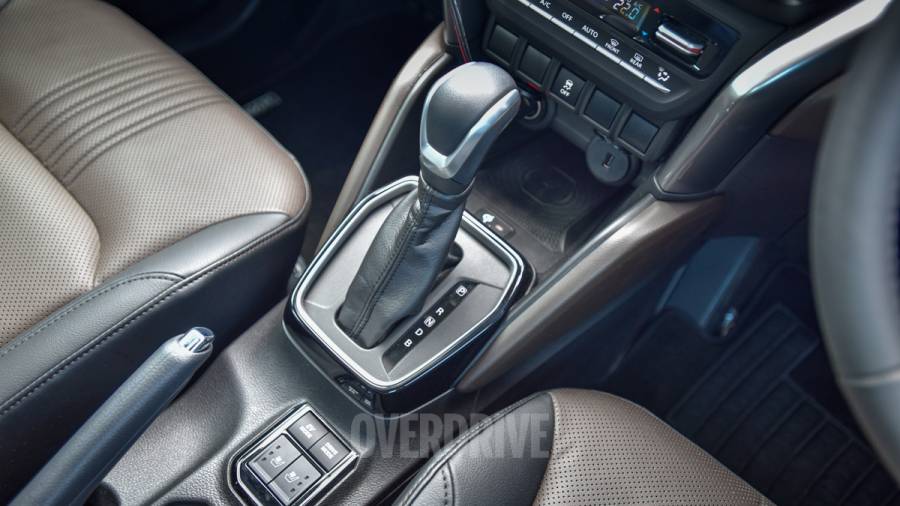 The e-CVT also works well. Except some delay in picking up pace during a quick overtake, there's little of the unloved 'rubberband' effect. The electric power seems to fill out gaps in the engine's powerband well. In effect, you have steady, uninterrupted acceleration. Also, a useful addition is the Braking gearbox mode. This effectively keeps the engine running at a higher rpm to mimic engine braking downhill and will also keep feeding the battery with more energy. We also found it quite useful in traffic since you don't get regen levels like in some other hybrids. The effect of all of this is that you get a rated 27.97 kmpl. We couldn't put the Urban Crusier Hyryder through an efficiency test but we barely ever saw the gauge drop below 20 kmpl in some quite heavy driving. This makes it one of the most efficient cars you can buy in the country that isn't a full BEV. 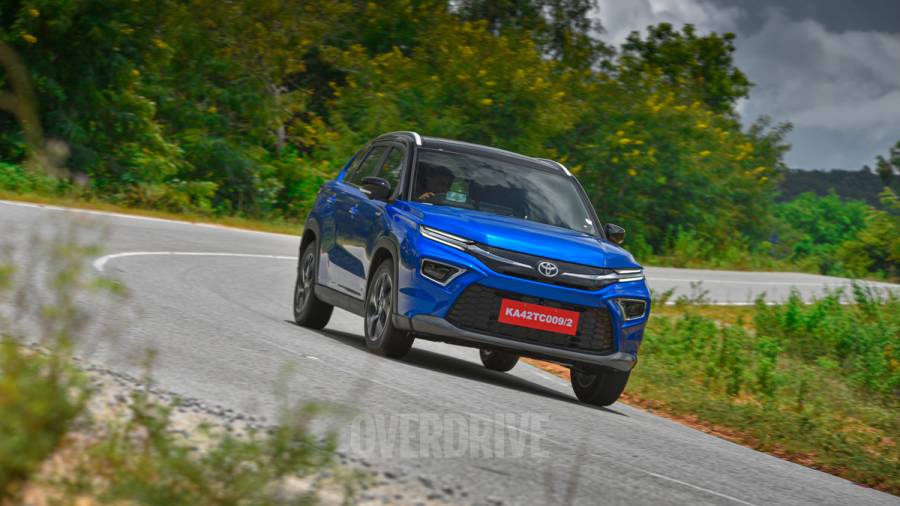 Now that should be reason enough for some of you to decide on the Hyryder but it must be said that the Toyota pairs this impressive drivetrain with a largely competent dynamic character. You have good visibility with the edges of the bonnet visible and the steering itself is light at low speeds. It weighs up well enough although it could be more direct at higher speeds. Oddly, we did find the the driving position to be slightly upset by a throttle pedal that felt placed a bit too far outboard. Also on mildly uneven highways, common in India, we saw ourselves making small corrections often. But generally, the Hyryder impresses more with its ride quality. 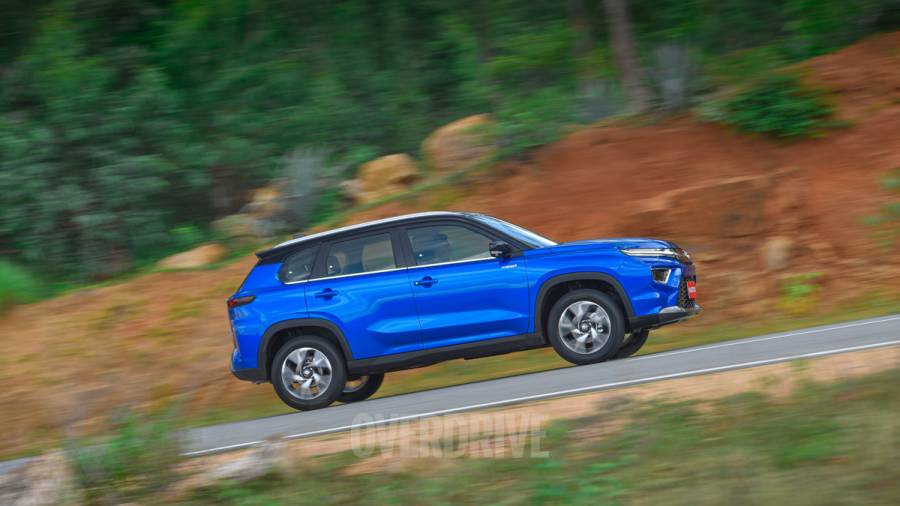 The SUV feels substantial on the move at all speeds and handles most bad sections confidently. Some larger low speed bumps pass through but even this is well damped. Around bends, there's about as much roll as you would expect in such an SUV and a touch of dive while braking but the Toyota is not really for you if you are looking for driving thrills. It finds a nice rhythm around corners at middling speeds but the drivetrain and the steering don't enjoy anything more demanding than that. But this trait will hardly be a deal-braking if you are considering the Hyryder. 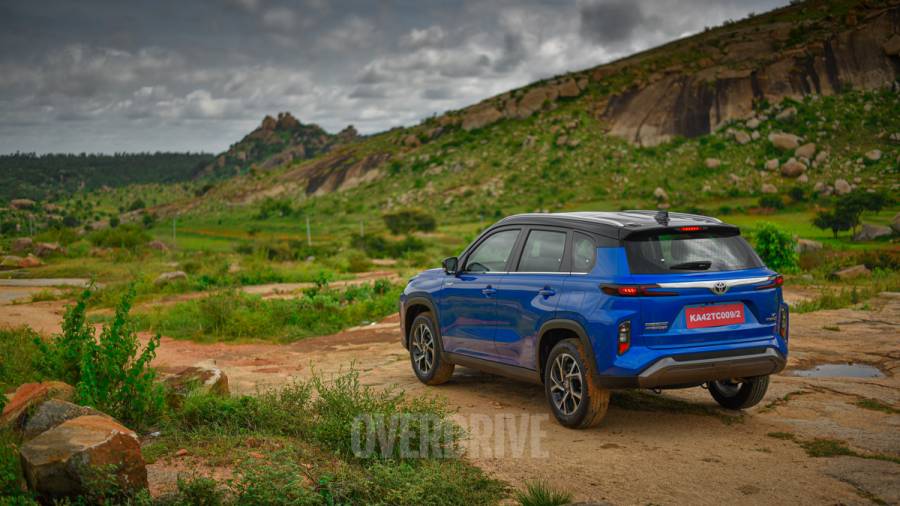 A mainstream hybrid SUV has been some time coming, but now that it's here the Toyota Urban Cruiser Hyryder goes right near the top as one of your options in the C-SUV segment. It can't quite match the toys or dynamism of some rivals but it looks and feels substantial, and is comfortable. And with that cohesively paired hybrid system with its incredible efficiency, the Hyryder seems like it has more than met its brief. Especially since we think it will be priced just above the diesel competition.