This is Triumph's all-new flagship adventure bike  the Tiger 1200, and there's nothing that's been carried over from the older-gen model aside from some bolts, so there's a lot to talk about with this new model, and I'm going to sum it up, in brief, the best I can. Basically there are two families of this new-gen Tiger 1200  there's the GT and the Rally. The GT variants, can be seen as the more road-focused bikes, whereas the Rally, as its name suggests, is the more off-road centric of the lot. In markets abroad, Triumph offers five models of this bike, but for India we're just going to get four of those models  we miss out on the base-spec GT variant. The prices range from Rs 19.19 lakh (ex-showroom) for the GT Pro and go up to Rs 21.69 for the top-of-the-line Rally Explorer model. 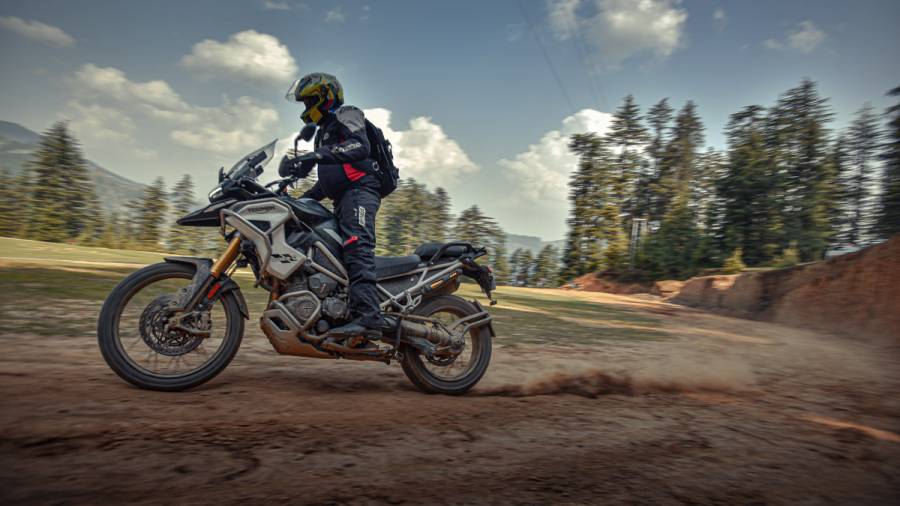 With this new-gen Tiger, Triumph has been pretty vocal in calling out its competition in the form of the BMW R 1250 GS. It has even gone so far as to say that this new bike is based on that motorcycle, but it is in fact better. Now we're out here today to ride both the Pro versions of the GT and Rally Tiger models to see just how much of that is true. After spending the first half of the day riding the Tiger 1200 GT Pro variant, I should say that it took just a little while on the bike, for me t see that this machine is leagues ahead of the older-gen motorcycle. With this 2022 model, everything's new  new engine, new chassis, new suspension, new shaft drive, the works! 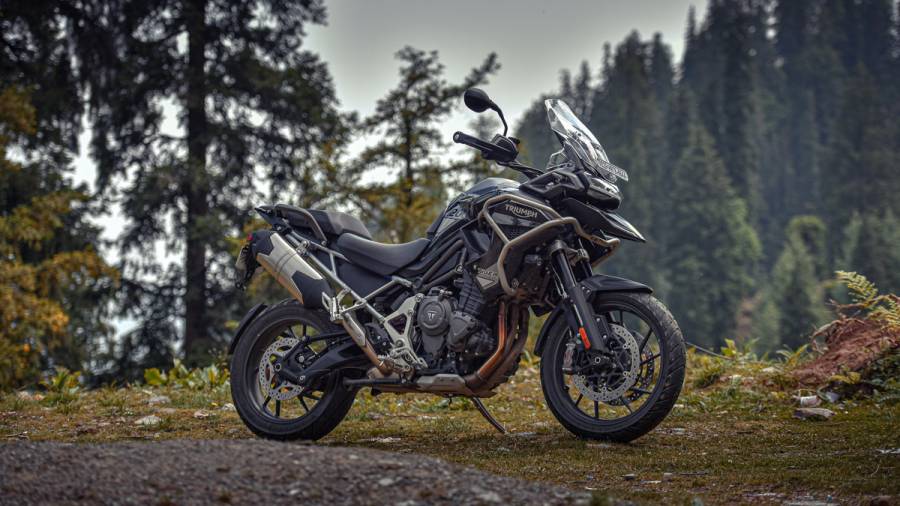 The new T-plane motor, it has a different crank angle and different firing order to its three cylinders which sounds a lot gruffer and I gives the bike a lot more character than before. But if you're the sorts who fancied the smoothness of the older-gen motor, you might not particularly fancy this motor on this variant of the bike, you will find it better on the Rally models. 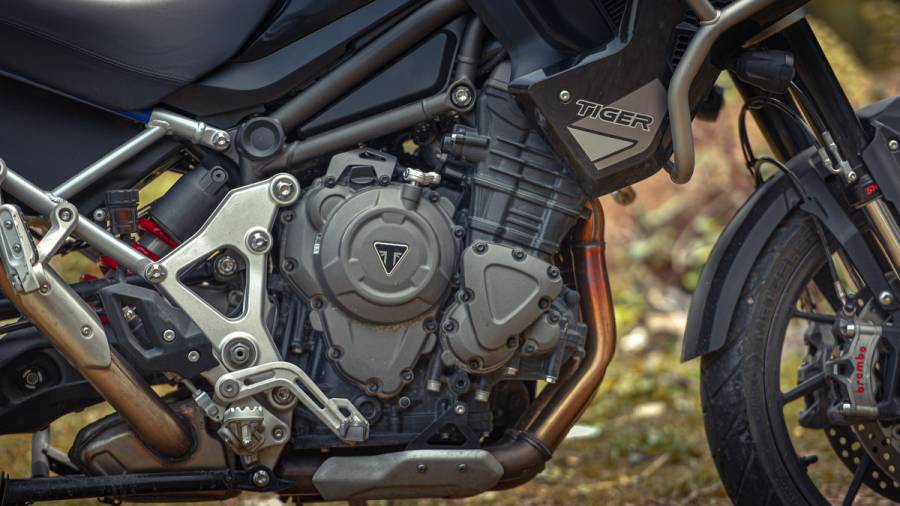 Both the GT and the Rally variants of the new-gen Tiger 1200 share the same spec engine. The purpose of the new 1,160cc motor's firing order and the crank angle is to give you that additional grunt low down the powerband. So, while with the Tiger 900 you'll have to wait till you cross the 3,000rpm mark for the fun to really start, this motor tries to address that problem, but it's still not eradicated it completely. There's a decent amount of shove low down which is great if you were to say, be riding off road, because that's where you'd ideally require the shove, but it may not be as useful on the road, because you see, this engine compromises on a bit of smoothness for that additional bit of grunt. 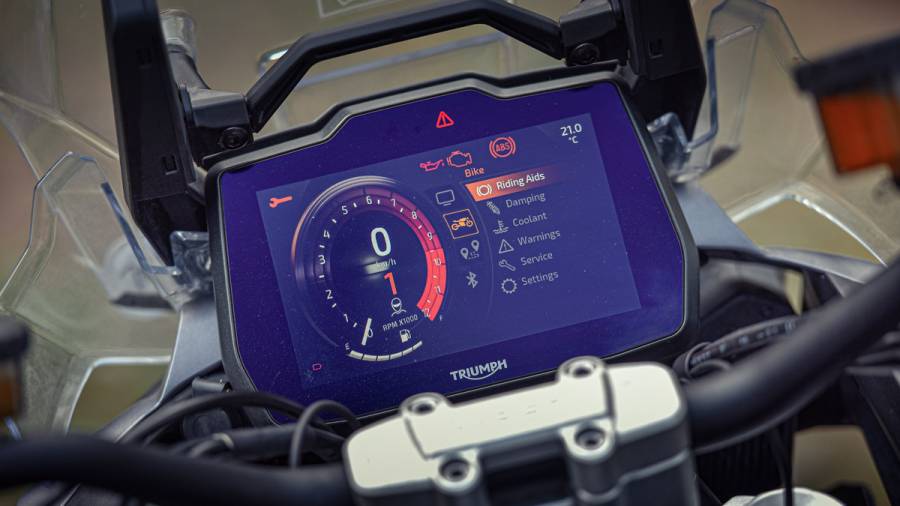 This motor makes 150PS of power and 130 NM of torque it's all there to be felt and enjoyed. The Hydraulic clutch takes a bit of time to get used to, but once you get used to it and have it under your belt, man, riding this thing's a breeze. The motor definitely feels a lot livelier at higher revs and once up there it will never shy away from being entertaining. 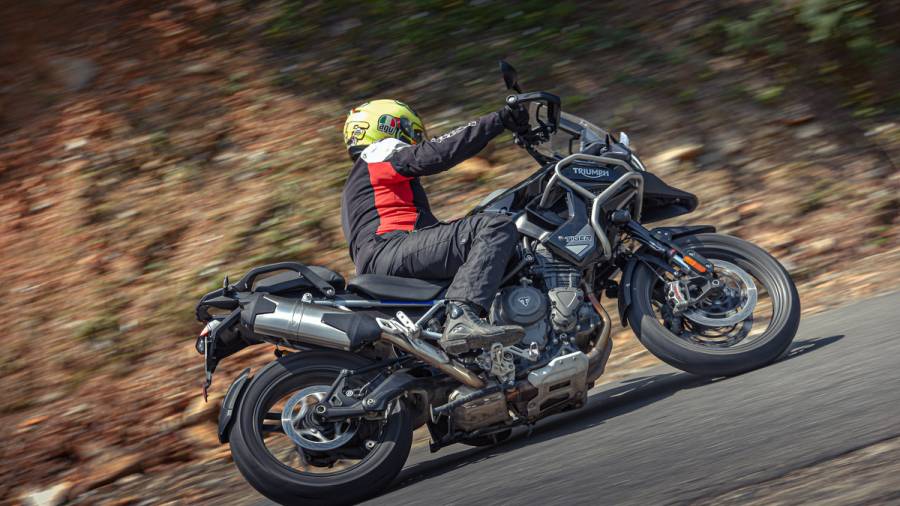 Now according to me the most outstanding bit about this motorcycle has to be in the ride and handling department. So this GT Pro variant weighs about 245kgs, which is about 25kgs lighter than the older-gen model. That's a lot of weight savings!  That's like almost twice the amount of weight that you're allowed to carry in your check-in baggage on a domestic flight out here. So from that perspective alone it's phenomenal. Also this new-gen model is narrower than before, and it'll egg you on to take on corners fast and at full tilt, and it won't be long before you're feel the feelers on the pegs scraping which is right about when you're reminded that you're on a big adventure motorcycle and not a thoroughbred sports bike. 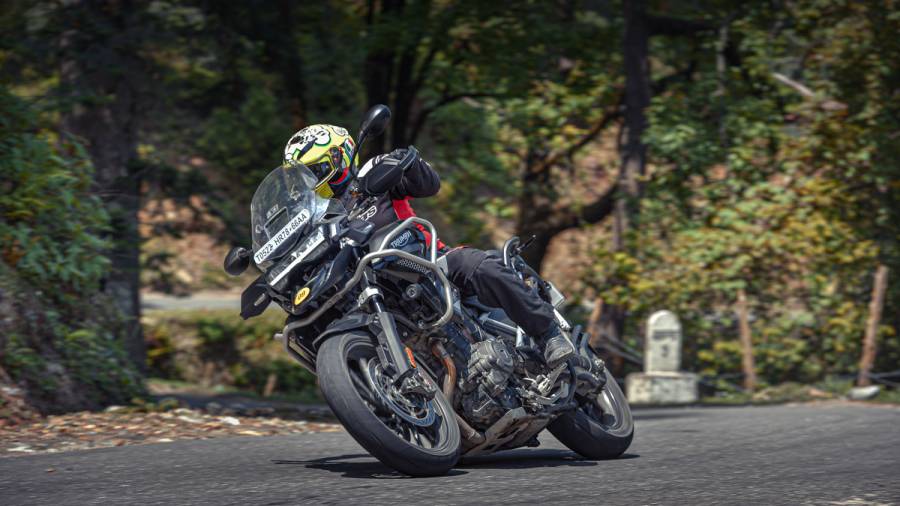 Triumph motorcycles has always been known to come out with some brilliant handling motorcycles, and with this new Tiger, the boys back at the factory in Hinckley have definitely worked their magic once again. It's very balanced and composed. The ergonomics are spot-on and you feel seated within the motorcycle rather than on it. Take on corners at speed, and the bike fills you with so much confidence that you'll be going much faster around the bends than you initially thought possible, and the best part is that you don't really have to move around the seat much to do this. Just lean into the corner and this little kitty shows that she's got a serious set of claws on her, but she's been rained really well. 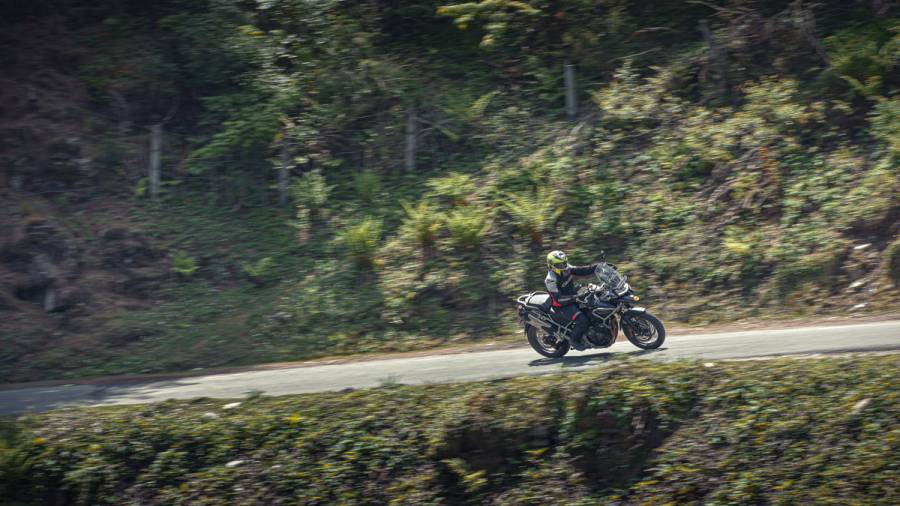 Overall the Tiger 1200 feels very much like the smaller Tiger 900, just going by its weight and how much effort you have to put into riding it. The 1200 sees about a 10 per cent increase in weight over the 900 but with the additional power, torque, features and of course lower maintenance costs with the shaft drive. 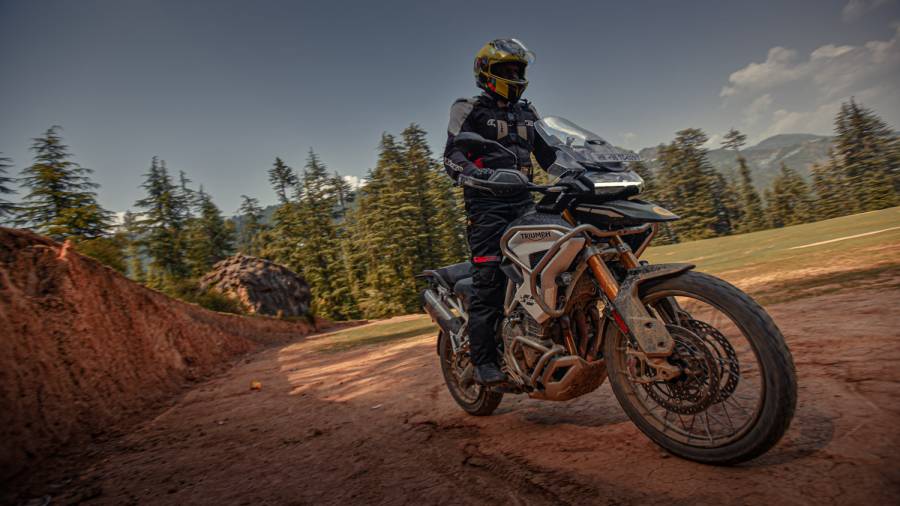 It didn't a great amount of time astride this bike to conclude that the Rally Pro is the more fun and exciting bike of this pair. Once again this is the more off-road focussed motorcycle, so you get bigger 21-inch front wheel instead of the 19-incher on the GT, the wheels themselves are cross-spoke and not alloy like on the GT, you get 20mm of additional travel at 220mmin comparison, a taller 875-895mm adjustable seat setup, engine protection bars and an aluminium bash plate, and the additional Off-road Pro mode, which lets you fine-tune the bikes settings electronically. Like the GT this version of the Tiger 1200 is a real hoot to ride. 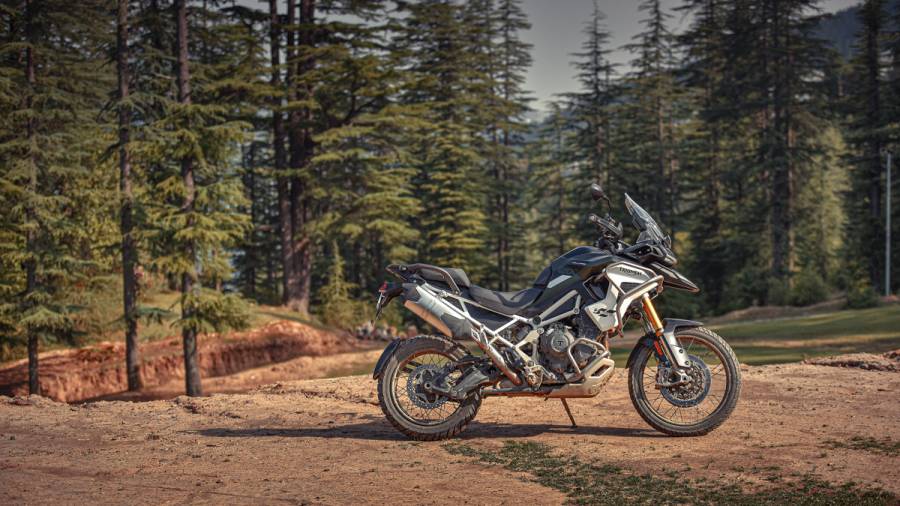 The motor doesn't fail to deliver on excitement. There's oodles of power on tap and it won't be long before you're hitting the trails confidently and serious momentum. Although the new motor has an improved amount of grunt in the lower part of the powerband, it feels a lot better in the mid-range and gets stronger the higher up you go. Another thing that deserves a mention are the brakes which are just insane. There's great feedback from the levers, and not just with the way the ABS is configured, even with the system shut off in the Off-Road Pro mode, the brakes feel so reliable even over the choppy stuff. The manner in which they function feels almost unreal. 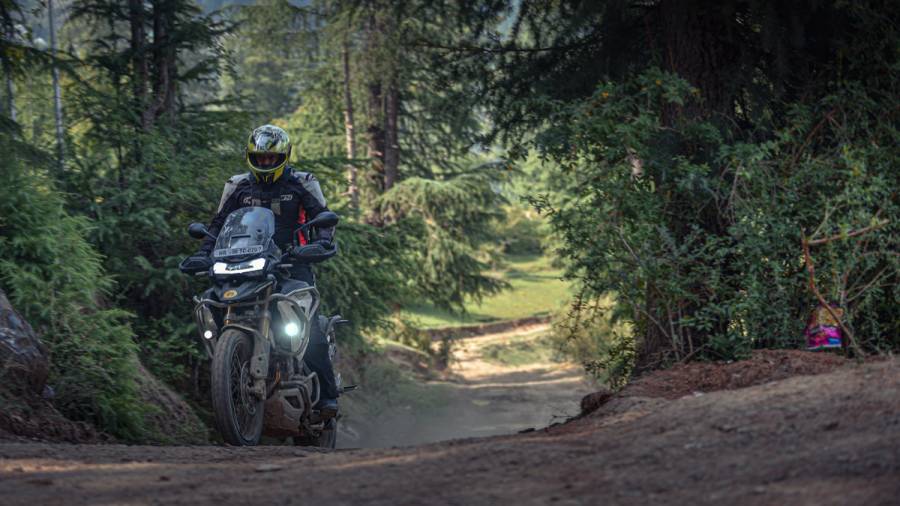 The new Tiger is a lot narrower than before, and in the ride and handling department, the bike simply excels. When the going gets tough, just stand up, grip the bike with your knees and go for it. You really don't have to think twice with this bike, it sort of assures you that if you just have the guts it'll get you glory, and that feeling is brilliant. Even when in Rally mode, with the electronic aids active but at a low level of interference, you can get the rear to step out nicely before the electronics intervene. While the Rally pro is a treat to ride over the rough stuff, you will have to be weary at low speeds because if you're too slow, the bike can stall, and if the surface you're on isn't flat and you're caught off-guard, getting a foot down in time will be a little tricky, because remember this is a tall, top-heavy motorcycle, and not the easiest to stand upright once on a tilt. The bikes definitely feel a lot better when you pick up the pace, not like they're difficult to deal with at slow speeds, but just that they require less effort to control then. 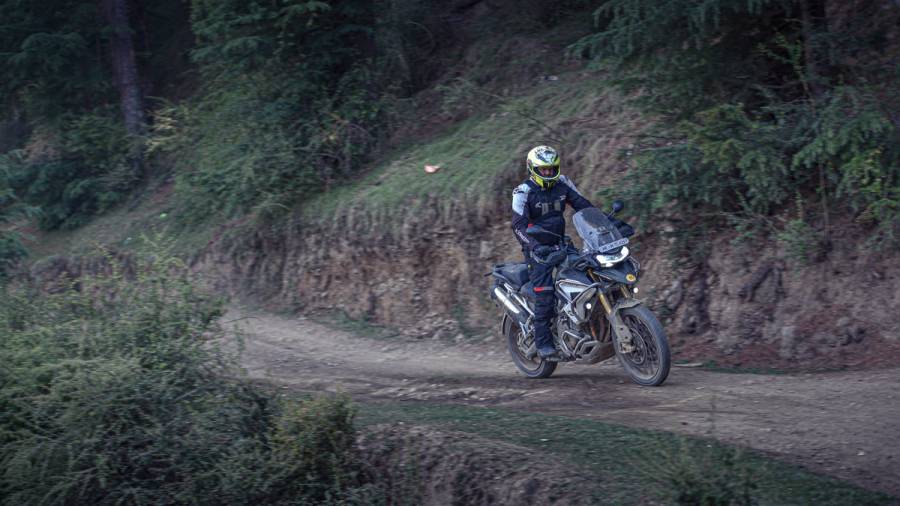 Honestly this new 2022 Tiger 1200 will makes riding the older model feel like you were riding an elephant. It just feels so advanced, but more than that, it feels rather effortless to ride in comparison. But if all this isn't enough, or rather, you prefer to live XL size, you'll definitely want to go in for the Explorer spec GT and Rally variants. Besides having a bigger 30-litre tank instead of the 20-litre unit on the Pro models, those bike variants get heated seats for the rider and pillion, a TPMS, Triumph's blind-spot radar tech and the Rally Explorer also gets engine crash guards. As it stands, the difference between both Pro and Explorer models is a good Rs 1 lakh. And after looking at the BMW R 1250 GS's pricelist, these new Tiger 1200 models come with additional kit and they're still the affordable bunch of the lot. Now does the new Tiger 1200 actually better the big BMW ADV? We'll have to ride both models back to back to conclude over that mater. We hope to pit them against each other soon, which will be absolutely epic, so do watch out for that.