Now we've seen what Mahindra's big EV push will look like with the concepts it has shown based on the INGLO architecture. But the first of these SUVs is still two years away.

In the meantime, the Mahindra XUV400 EV is meant to cover off the likes of the Tata Nexon EV Max and the MG ZS EV, and to meet the steadily rising popularity of these mass-market electric SUVs. Effectively the production version of the eXUV300 that was shown at the 2020 Auto Expo, the XUV400 is the first electric Mahindra SUV. So is there reason to be excited, it's been a long time coming!

The Mahindra XUV400 identifies itself to be part of the XUV sub-brand of Mahindra's electric SUVs with its quite striking copper highlights. This might be a bit on the nose for some but it must be said that these highlights go well with the earthy but vibrant colour palette this EV can be had with. 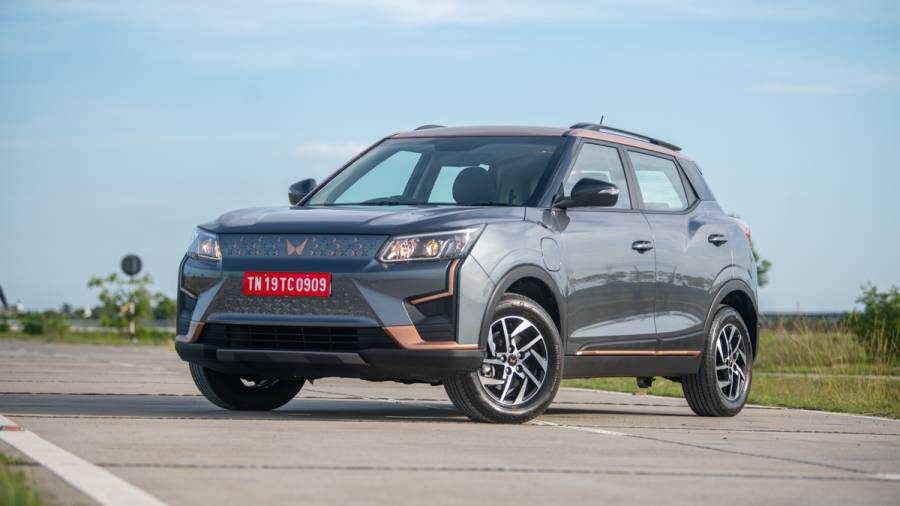 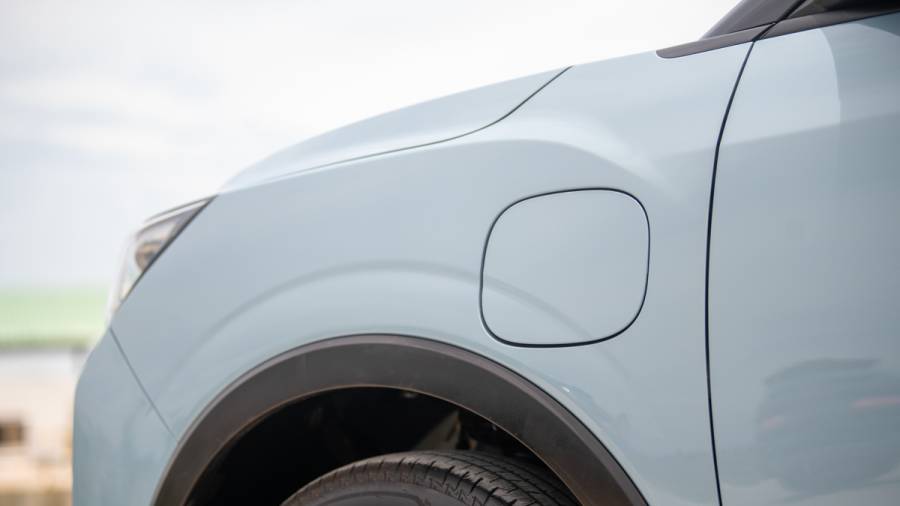 As you would expect, the front fascia is now blanked out but the space is tempered with the copper twin peak logo, the x-motifs and the angular surfacing. It's quite a busy look but should appeal to buyers making a statement. The headlamp units have been carried over from the XUV300, they could have been full LEDs, but a bigger miss seems to be the absence of front fog lamps. Thoughfully, Mahindra has brought the charging port to the front left fender, so you won't need to back up into chargers and parking spots. 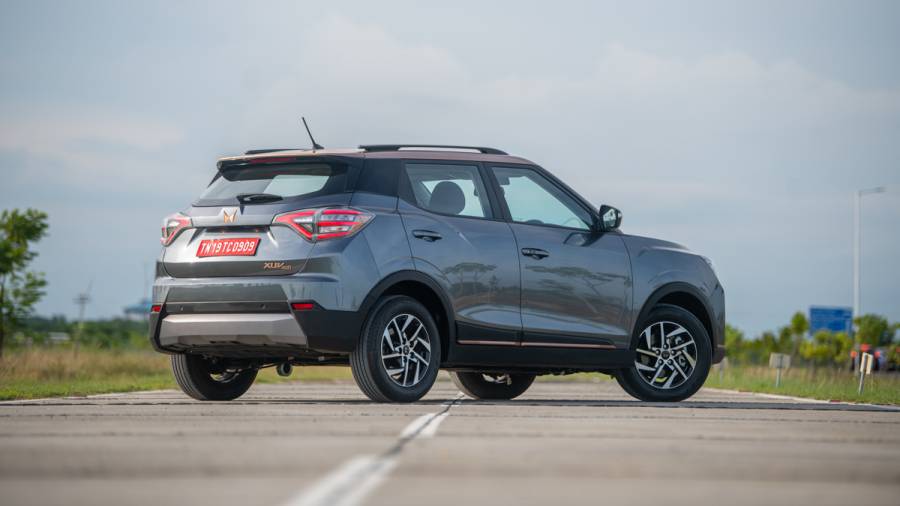 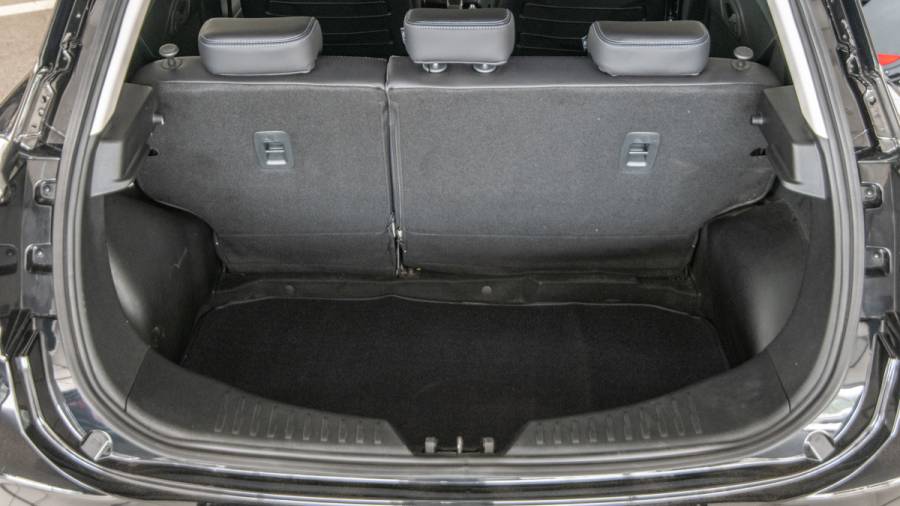 That said, the XUV400 is a much more proportionate-looking SUV than the XUV300 when viewed in profile or from a rear-quarter angle. This is down to it being 205mm longer than the XUV300. The abrupt rear of the ICE-version has been replaced by quite prominent haunches while the clear-lens taillamps with their copper detailing also now look the right size for the quite shapely boot. All the additional length has gone to the rear overhang to accommodate the battery pack, but another positive of this is that boot space has grown to a far more usable 376 litres, addressing another complaint with the XUV300. As with the front, there's quite some dark cladding paired with copper highlighting for relief. If you want an EV that draws attention, this one is right up your alley.

The inside of the Mahindra XUV400 is again largely a carry-over from the XUV300 but refreshed for this application. So the grey and light beige look of the XUV300 is now replaced by a more contemporary all-black and copper theme. The large windows make sure that the sense of spaciousness hasn't been diluted significantly although the 2,600mm wheelbase remains unchanged. 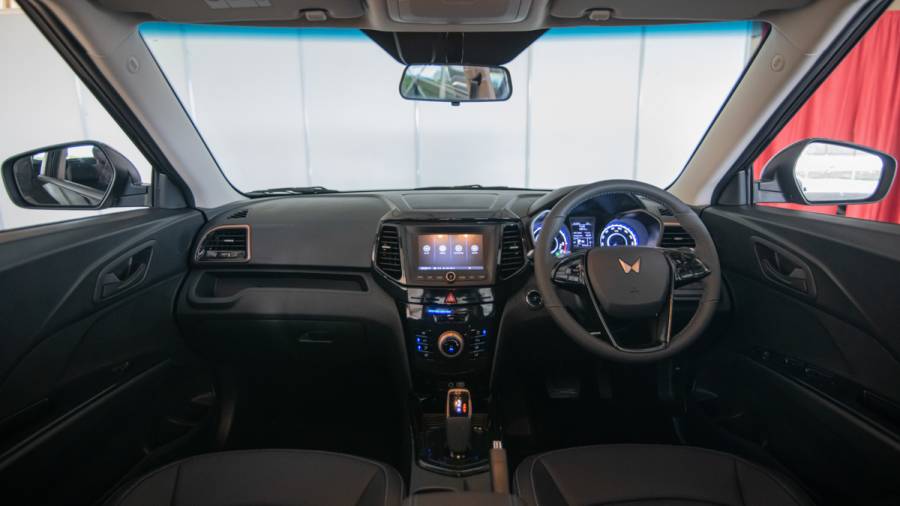 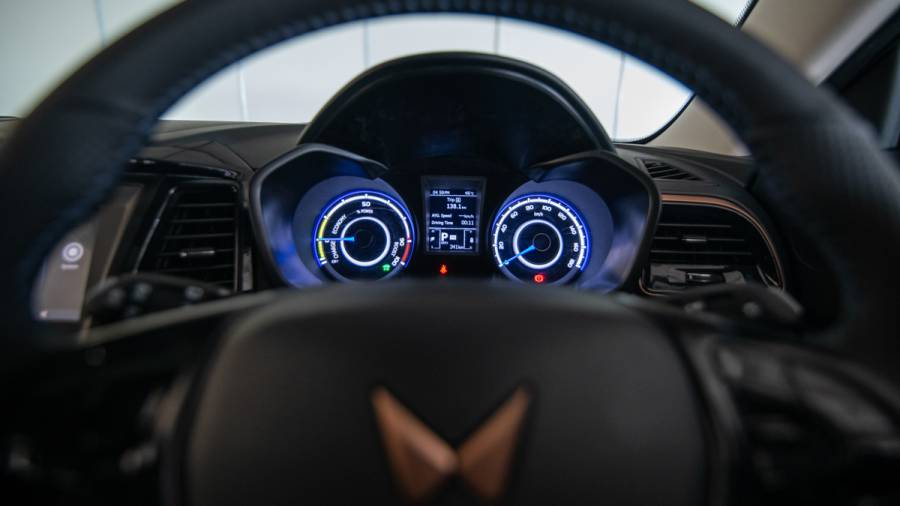 The dashboard is a straight lift from the XUV300. The new colour paired with the gloss black bits and blue backlighting works to the XUV400's favour to an extent, but we think Mahindra could have gotten rid of those fiddly slim plastic switches for the climate controls and trip computer. Although, in the current scheme of things, it's good that you get physical controls, to begin with. Similarly, we would have liked a more contemporary touchscreen, it's the old Mahindra 7-inch unit which isn't all that bright. That said, you can just use Android Auto and Apple Carplay and touch responses are alright. The gauge cluster too is the same layout as the XUV300 but with the EV-specific dials. You get the drive mode-specific backlighting too but with this SUV focused on a more technologically aware buyer, some form of digital instrumentation would have been nice especially given the small single-colour MID. 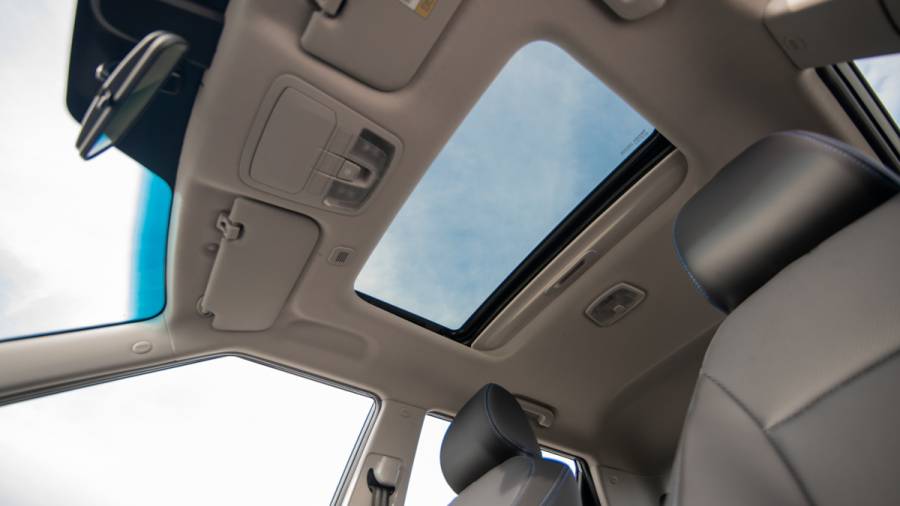 You get fewer features than in the XUV300, but this may be in the interest of a competitive price tag. So while kits like dual-zone climate control and the steering modes are gone, you get a sunroof, climate control, auto headlamps, cruise control and connected car tech. Rivals like the Nexon EV Max and the MG ZS EV are better equipped though getting colled seats, wireless charging and a panoramic sunroof among them. 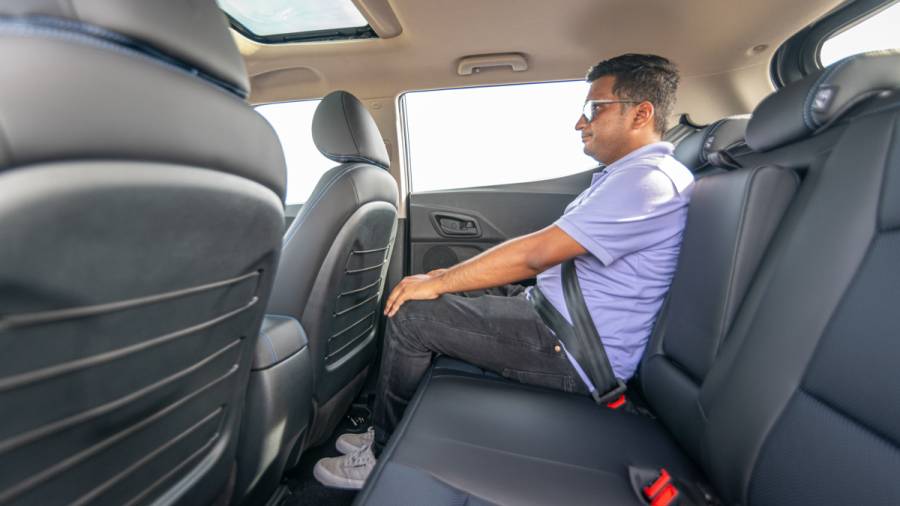 But the XUV300's best attribute carries over to the EV version. The SUV was already quite a large one so you have great shoulder room with large and supportive seats in the front. But with its 1,831mm width, families looking for an EV should be quite interested in the XUV400. It is a genuine five-seater, with space for two adults and a child in the rear seat. There's enough legroom for 6-footers and even the scooped-out roof adds a good amount of headroom.There are large storage spaces too for bottles and small items. If anything, the cushioning for the backrest could have been a touch softer here. A notable miss here is the absence of rear AC vents or charge ports. 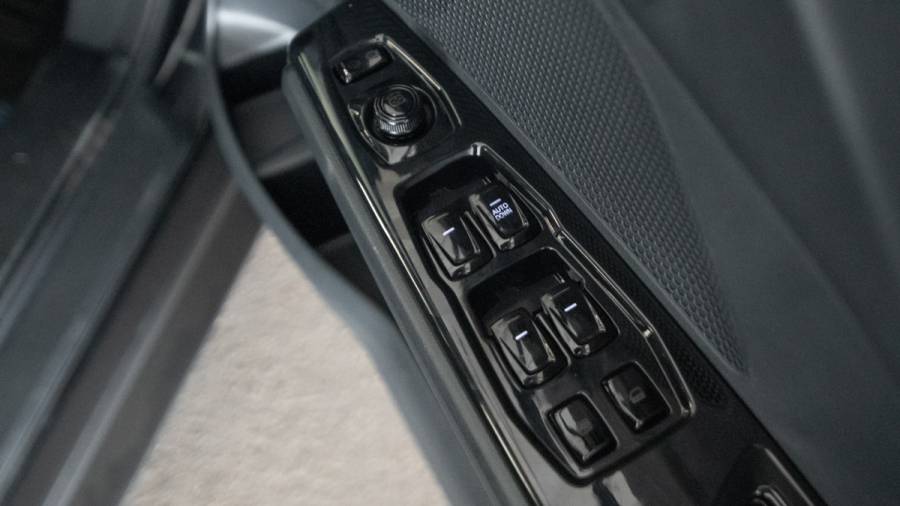 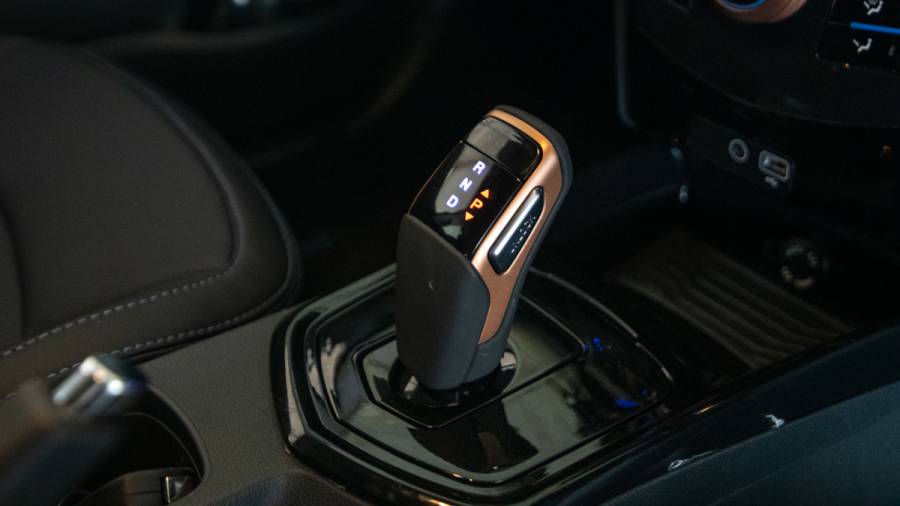 As before, the quality of plastics and the general fit is about as good as you can expect in this segment. The gloss-black switches could have been less dull but the new shifter feels great to use with its copper trim and rubberized finish. There aren't too many soft surfaces other than the common touchpoints but this is par for the course.

The Mahinda XUV400 is powered by a 39.4 kWh lithium-ion battery pack. The battery is IP67-rated for water and dust protection and has been packed into the existing SUV's architecture, along the floor and under the rear seats. The ARAI-rated range figure is 456 km, although through our drive we had no real inkling of the XUV400's efficiency. We drove pre-production models with beta software that didn't have a range indicator or a functioning battery level indicator. But we think a 300 to 350 km real-world range can be expected. 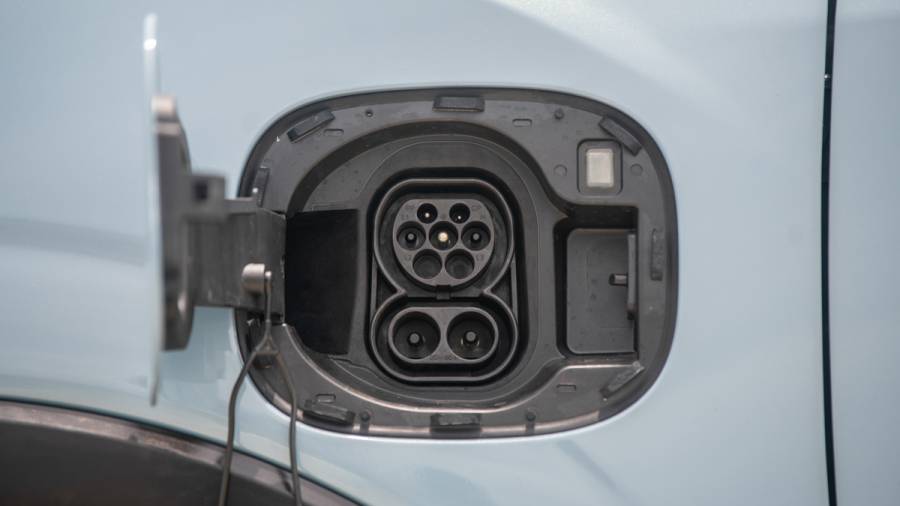 There are no paddles to select regen modes but the three drive modes - Fun, Fast and Fearless - will alter regen levels too. More usefully, you have an L mode accessed via the shifter that is essentially the Braking mode you find in many BEVs and hybrids. This should recoup quite a bit of charge in city driving.

As for charging the XUV400, the SUV can accept up to 50 kW of DC fast charging which will fill the battery up to 80 per cent in 30 minutes. A 7.2 kW AC charger will top the battery up in 6.5 hours via a regular three-pin socket will do it in 13 hours.

Another talking point for Mahindra with the XUV400 is its performance. The electric SUV's 150PS and 310 Nm give it a 0 to 100 kmph time of 8.3s, making it the fastest mass-market car in India. And this translates well on the road. On the high-speed bowl, the XUV400 was quite happy to get up to its speedo-indicated 160 kmph top-speed. Performance does tail-off a bit past 120 kmph but it's nowhere near as drastic as in some other EVs. In the most conservative Fun mode, speed is limited to 95 kmph while this goes up to 120 kmph in the Fast mode.

The XUV400's high-speed stability is commendable. Aside from some skittishness when approaching the steep 40-degree banking, the XUV400 impressed us with its sure-footedness at these speeds. But we thought the throttle pedal was a bit too sharp in the Fearless mode but users may like the sense of performance it conveys. Either way, this is better tempered in the calmer modes. Expectedly, there is wind and tyre noise at these speeds but not to an extent that it makes you uncomfortable. 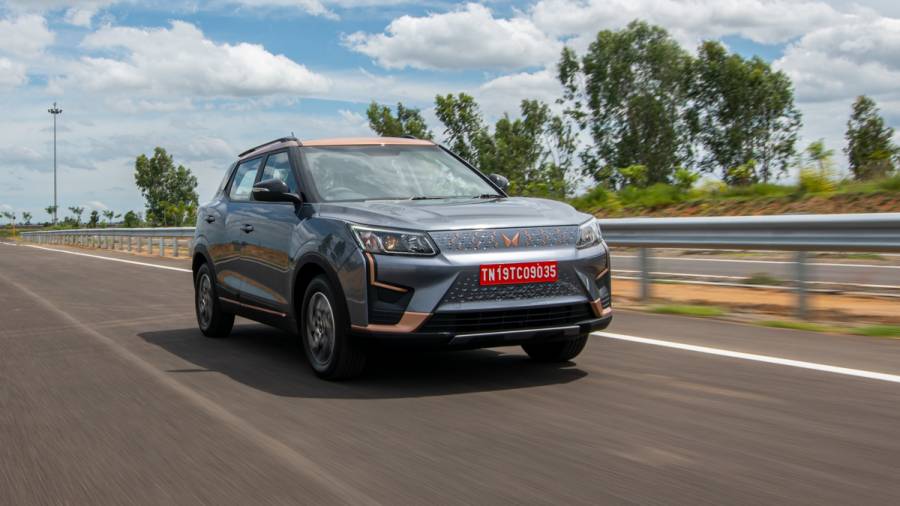 But we think you will spend most of your time in the Fun or Fast modes in regular use. Even in the Fun mode, the XUV400 doesn't feel laboured so keeping pace with traffic shouldn't be a problem. The Fast mode is not a very large step up but the XUV400 does feel a touch livelier which should make life easy during overtakes or driving on hilly terrain. 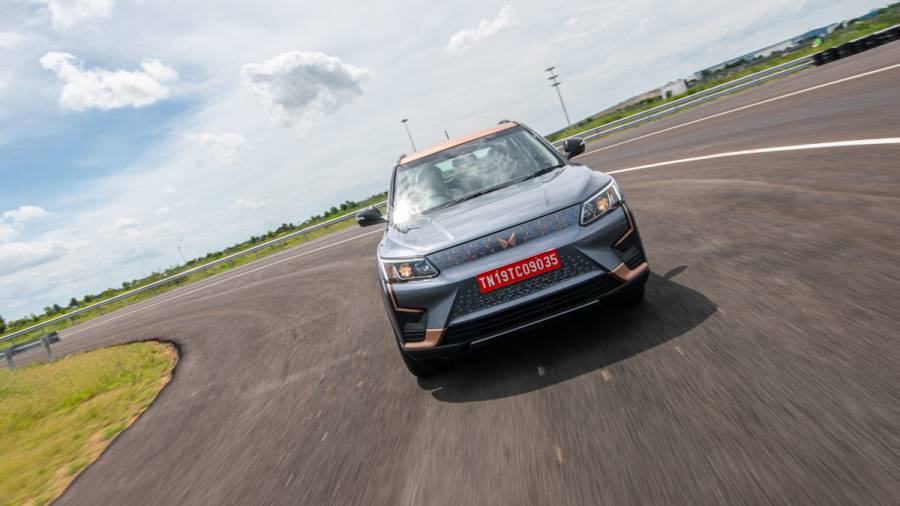 Surprisingly we didn't notice too much difference in the regen levels between the modes, but we think this could be due to these cars being not fully production ready. Generally, there could have been slightly stronger regen here but you are covered in that respect with the L mode. This single pedal mode is generally well-tuned. It tightens up the drivetrain a bit and seems to drop performance but will be great in crawling traffic. Unlike the Nexon EV, the XUV400 will come to a complete halt but again the deceleration could have been a touch stronger to let you fully trust this new system. Compounding this sensation is the quite light and abrupt action of the brake pedal, a trait carried over from the XUV300, which makes coming to a complete stop cleanly a touch difficult. 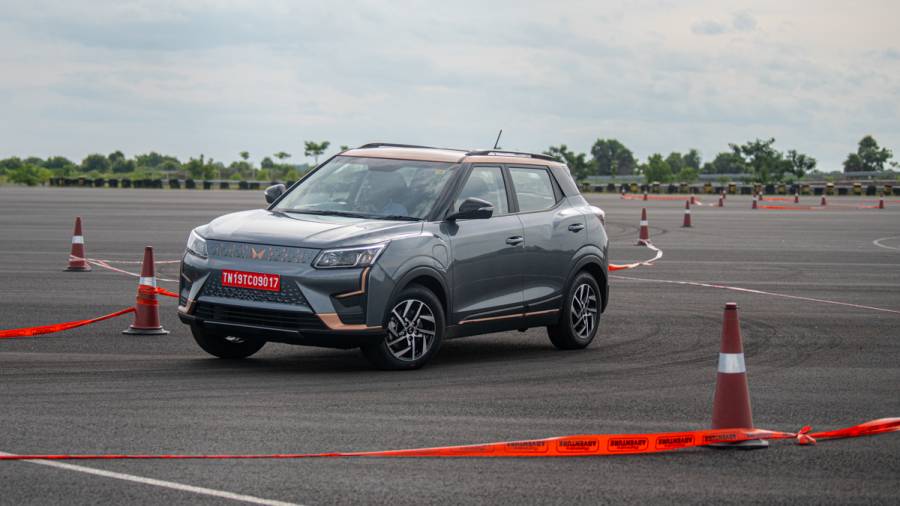 The Mahindra XUV400 is also one of the nicer EVs to be in if you like driving. Aside from the typically stiff EV damping over imperfections like expansion joints and manhole covers, which thud through a touch sharply, the XUV400 stays well poised over our surfaces. The EV rides flat and body roll is well-controlled, considering the low centre of gravity. We would have liked a bit more heft and precision from the steering wheel. It's stress-free in traffic but you find yourself second guessing your inputs on long, sweeping turns with the rack not weighing up as speeds rise. But get past this and the XUV400 is about as engrossing as an EV like this can be to drive. Having said that, our impressions are from a relatively short drive in controlled conditions so a full road test will be the best judge of the XUV400's driving character.

The Mahindra XUV300 is an NCAP five-star rated car and the XUV400 should largely carry that forward. You get six airbags, rear disc brakes, a rear parking camera and stability control which are all at par with rivals. 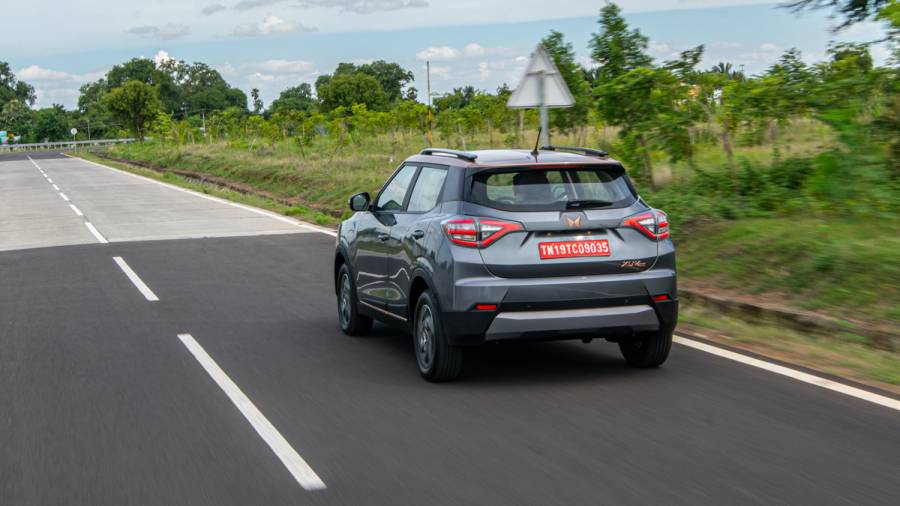 We hope Mahindra prices the XUV400 between Rs 19 to 21 lakh for it fully realize its potential when it launches in January 2023. We would have liked more features and a clearer picture of the XUV400's efficiency. But after this early impression, we think the Mahindra XUV400 has what it takes to be a solid option in this nascent segment. It is spacious, has a potent but well-judged EV drivetrain, looks striking and is largely good to drive.