When it comes to poster boy of ADVs, BMW's flagship R 1250 GS is one of the most capable dual-sport motorcycles in the world. In 2016, BMW Motorrad offered this motorcycle's DNA in a more accessible form with their youngest in the GS series, the G 310 GS which was a result of their collaboration with TVS Motor Company. Aimed at attracting newer and younger riders, the G 310 GS opened doors to many who aspired to get a BMW motorcycle but shied away due to their eye-watering prices. 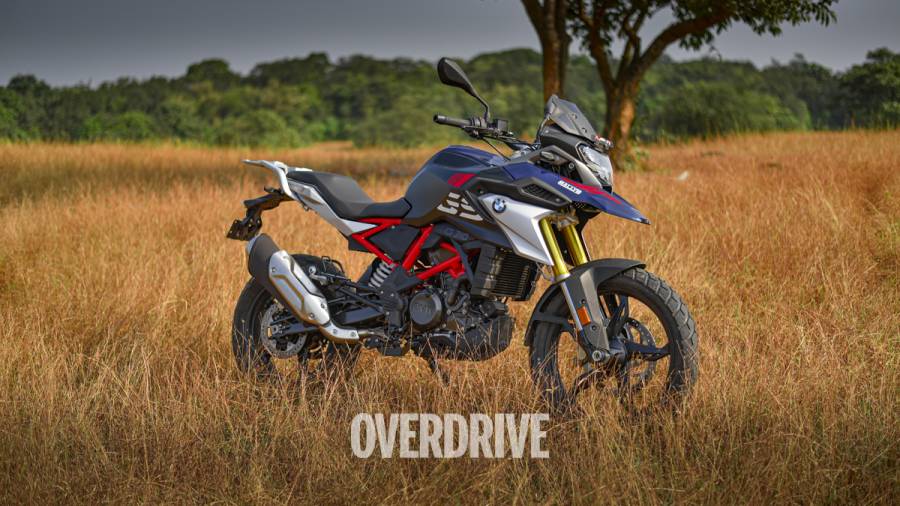 The 2020 BMW has received LED DRL and lights along with new two new paint schemes. Looks more handsome and premium than before.

For the year 2020, BMW Motorrad has updated its entry-level adventure motorcycle with new colour schemes and more tech along with a BSVI powertrain. While there is more to the updated G 310 GS, it costs substantially less to own as compared to the previous one. Does that make for a stronger case against the KTM 390 Adventure, the winner of our entry-level ADV shoot-out? We find out in our comparison feature. 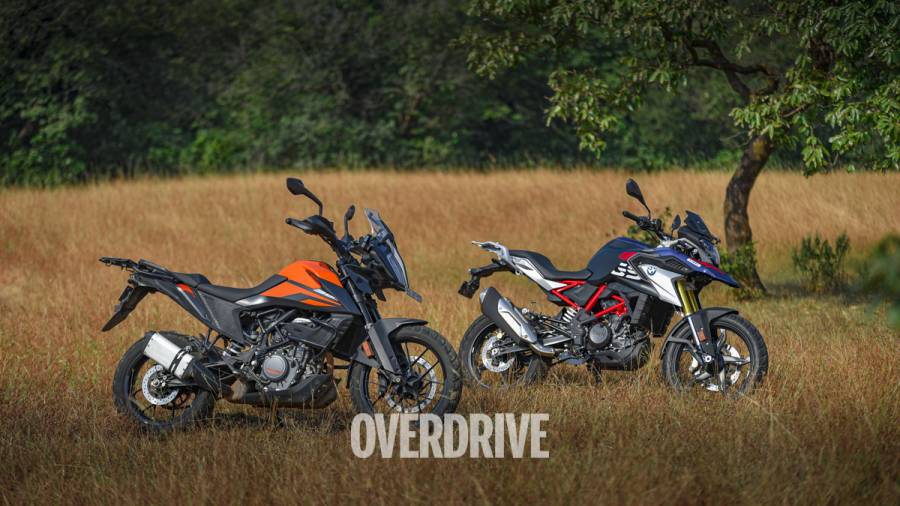 Wherever we went with the BMW G 310 GS and the KTM 390 Adventure, it was the GS that attracted the maximum attention overshadowing the KTM. While the previous iteration of the GS had an intimidating presence, BMW has now updated it with DRL and LED headlights, giving it a similar look like the more premium BMW F 900 R. However, the highlight of this update are the new colour schemes, which has enhanced the appeal of the 310 GS. 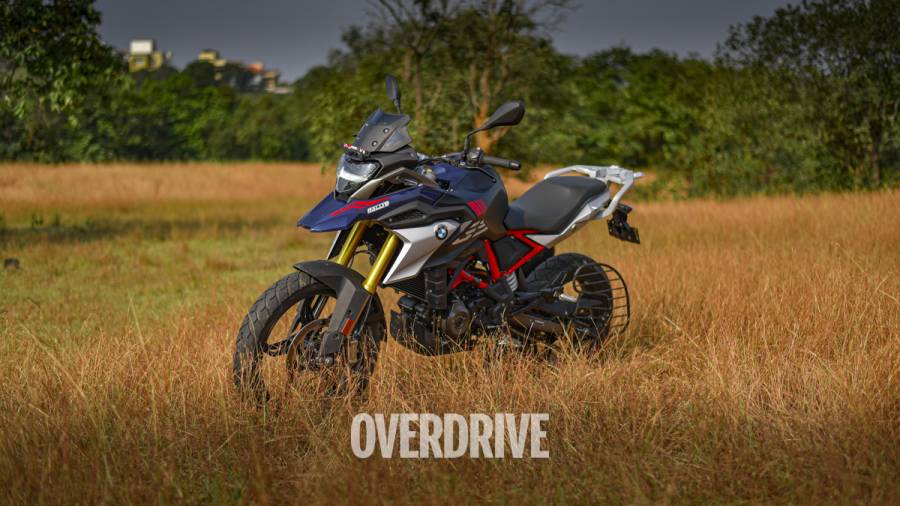 The BMW G 310 GS has always had an intimidating presence. The 2020 updates have enhanced its appeal

The shade that you see in these pictures is Rallye style with cyanite blue paint and a contrasting red on the frame with subtle highlights on the beak and the fuel tank. Although a premium over the stock polar white, we definitely recommend this particular shade even over the black-yellow 40 Years of GS edition. Although, what could have looked super cool are BMW's Motorsport colours with Style HP on the G 310 GS much like the flagship 1250. Shouldn't be tough to replicate with vinyl though. What we all unanimously felt and agreed on is that now the G 310 GS looks much more premium. 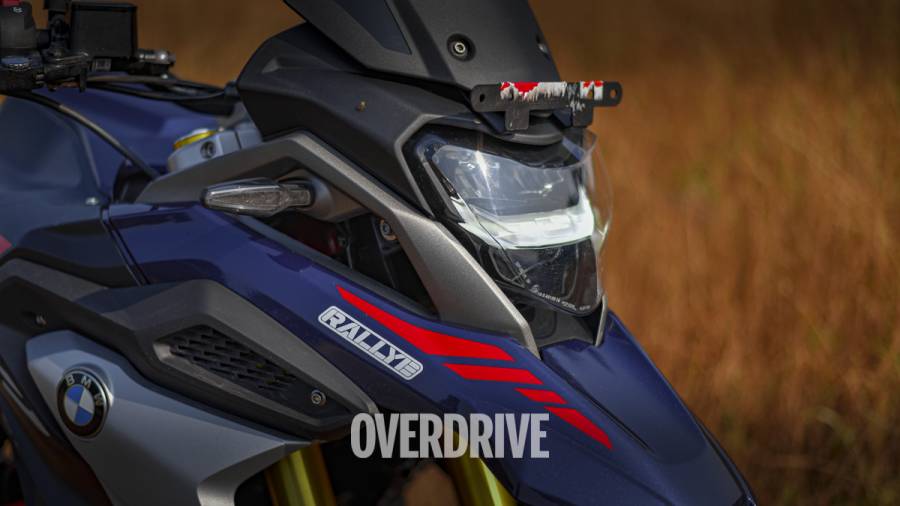 On the other hand, the KTM 390 Adventure gets overshadowed by the 310 GS because of its compact form and minimal panels. Even though the GS has a smaller tank capacity of 11-litre, it sports a muscular design giving a much larger appearance compared to KTM's 14.5-litre fuel tank. Further, the GS runs on wider tyres and also comes with premium 5-spoke alloy design. All of which gives the BMW G 310 GS much better street presence than the KTM 390 Adventure. 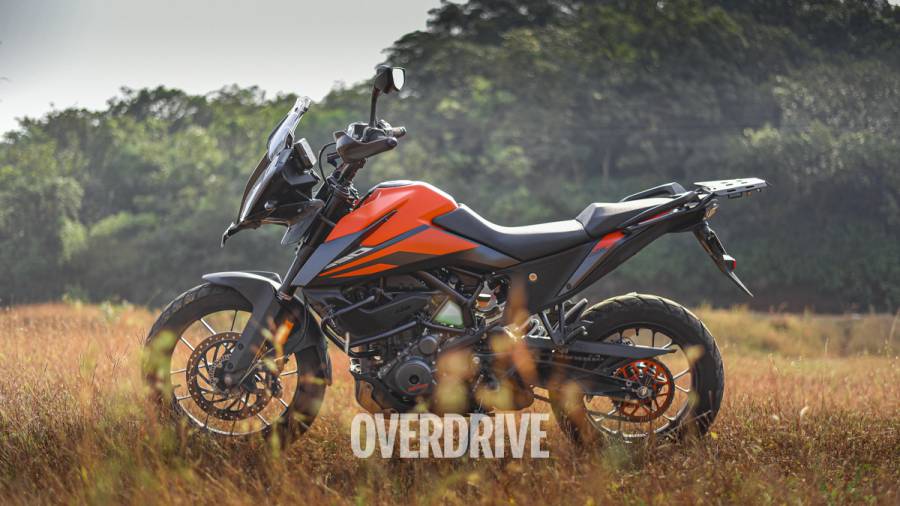 The KTM 390 Adventure has a compact form as compared to the G 310 GS. The handlebar riser and the luggage rack are aftermarket additions.

If you have played with the instrumentation of any of BMW's GS motorcycles, you can't not be impressed by their layout, the plethora of information they provide and the crisp display, making them the best in the business. This feeling is completely missing when you see the basic LCD instrumentation on the G 310 GS. We hoped this iteration of the GS would sport a full-colour TFT instrumentation as even its more accessible sibling, the Apache RR 310 received the same in its BSVI avatar. Further, even the Hero Xpulse 200, at half the price of the GS, comes with smartphone connectivity and navigation support. 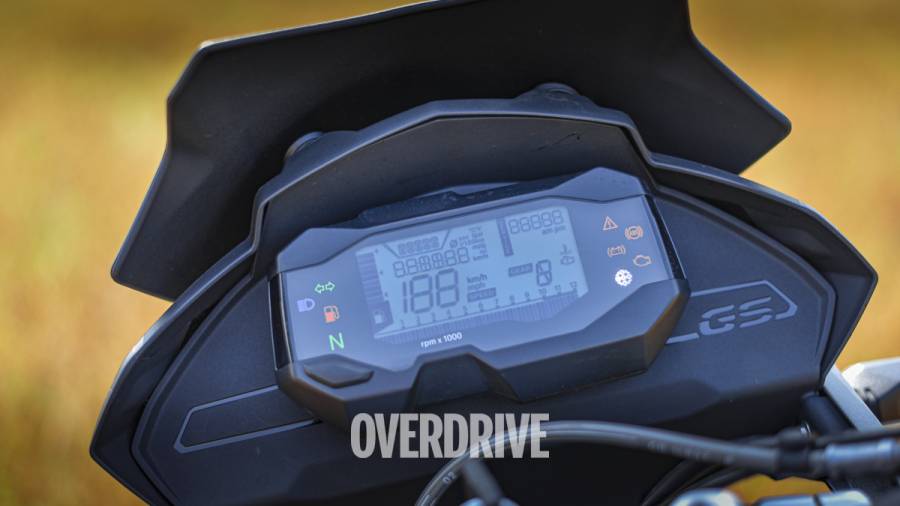 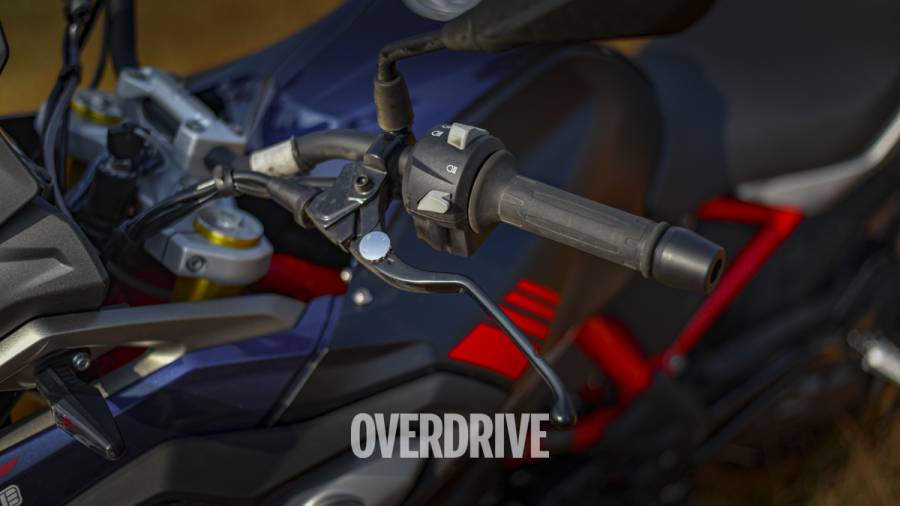 The 2020 updates have also brought in the 4-way adjustable clutch and brake levers.

When you bring the KTM 390 Adventure into this mix, the GS feels far behind as the former's 5-inch TFT instrumentation is far more modern and better equipped with its smartphone connectivity for Bluetooth telephony, music, navigation as well as engage/disengage ABS, traction control and quickshifter. Such a comprehensive electronics suite on a motorcycle at this price is truly impressive. 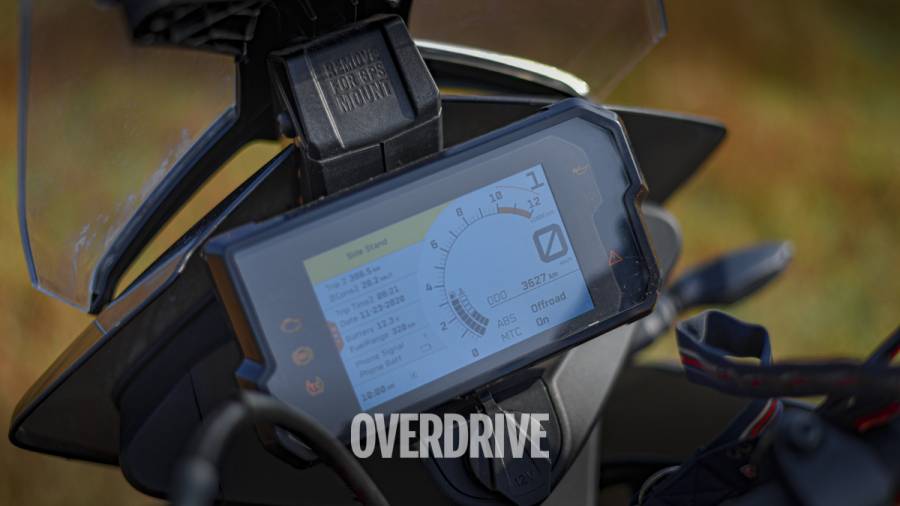 The 5-inch TFT instrumentation on the KTM 390 Adventure just feels too premium with its options to control Bluetooth telephony, music, navigation and also switch ABS, traction control and quickshifter

In addition to giving the engine a nice shade of black, which does look good, BMW has also equipped the engine with ride-by-wire and slip and assist clutch. Even in its BSVI guise, the G 310 GS makes 34PS and 28Nm from its 313cc single-cylinder mill. Though, the peak power is now available at 500rpm prior whereas the peak torque has been pushed by a 1,000rpm. 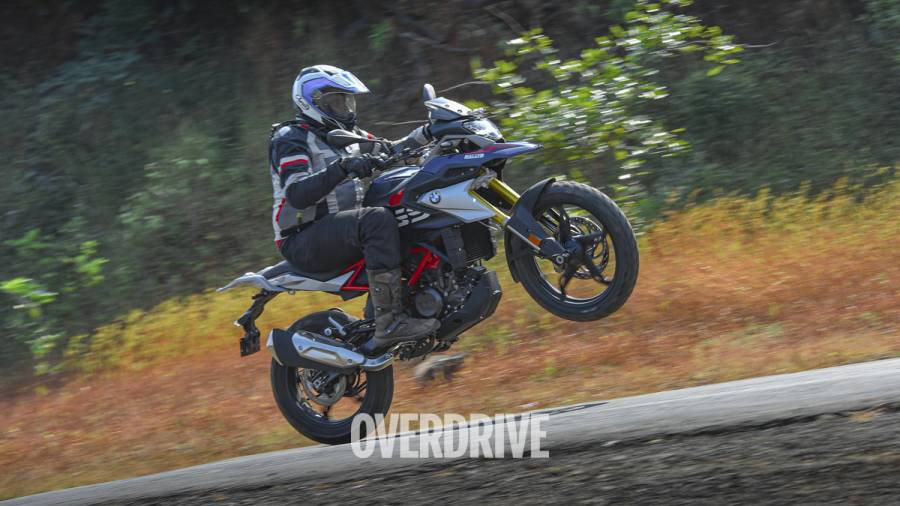 With the presence of ride-by-wire, the throttle response feels nice and precise.

In the previous iteration, vibrations was a big issue which has been addressed to a good extent with the BSVI update. The engine now feels nice and smooth at lower revs, which makes it easy to commute around at slower speeds. What has gotten better is the throttle response which feels more precise and has better consistency, thanks to ride-by-wire. The engine builds speed in a linear manner and takes barely any efforts to reach speeds of upto 80kmph. 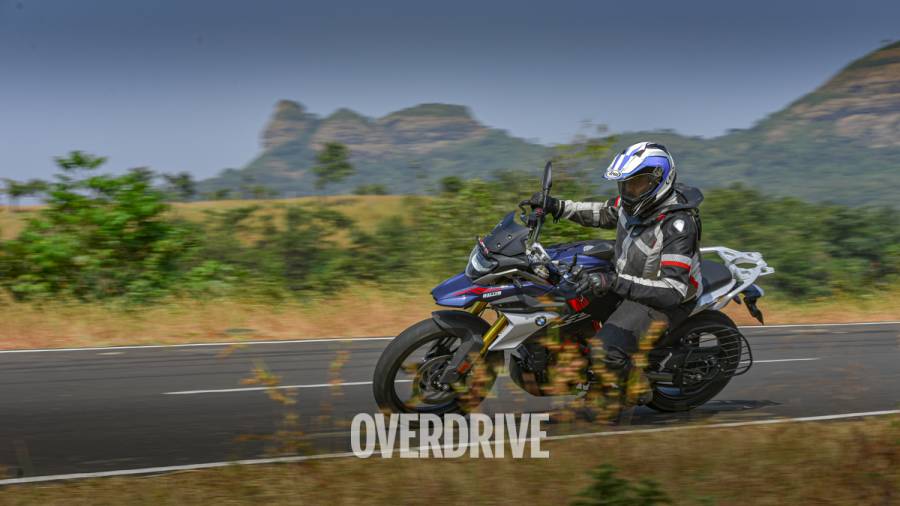 That being said, the engine does feel a bit coarse in the mid-range. Further, when you reach close to 6,000rpm, the buzz from the motor can be felt on the tank and also the seat. If you can manage to get over that, the GS can be reasonable at speeds of 110kmph. While you can push the motor further, it does feel strained at higher speeds. 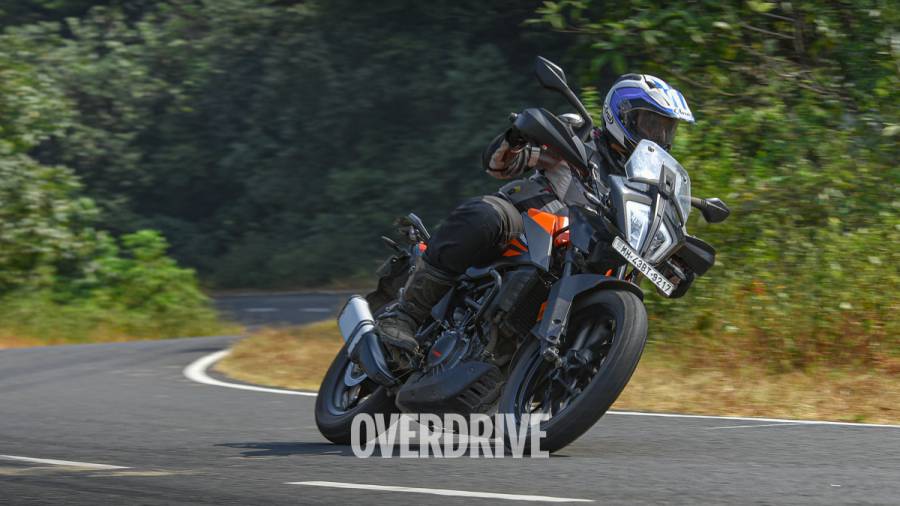 What we love about the KTM 390 Adventure is its immediate response across revs. 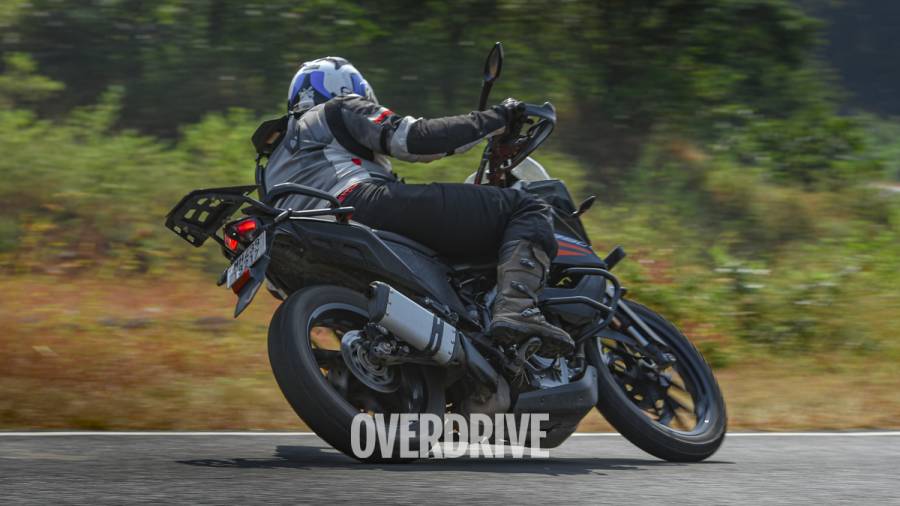 In comparison, the 390 Adventure's 373cc unit makes 44PS and 37Nm. What we like about this unit is the fact that it feels eager across the revs with its immediate response. This makes the 390 Adv feel more spirited compared to the GS. Be it commuting in city traffic or touring on the highways, there is enough juice in the motor to keep you entertained all throughout. While you can easily porter around at speeds of 30-40kmph at a higher gear sans any discomforting vibrations, the engine has the same level of confidence when you are doing triple-digit speeds even after crossing the 100kmph mark. 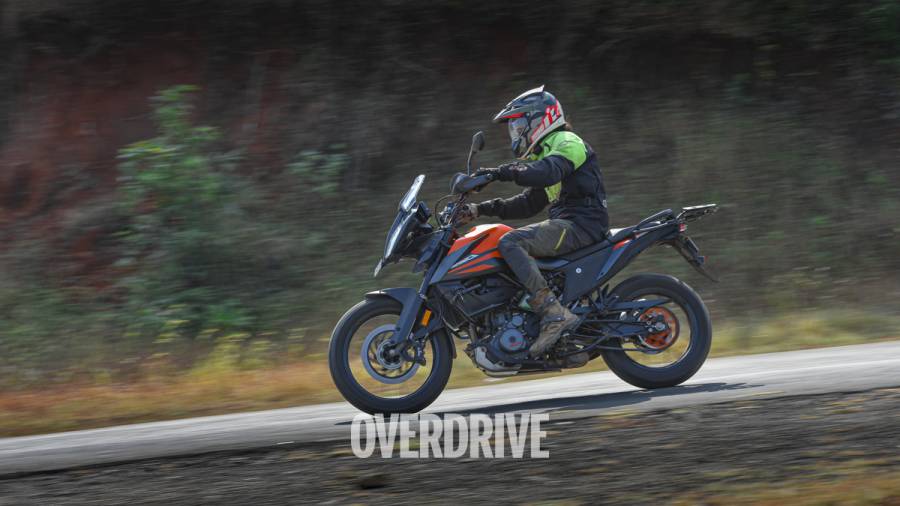 Both motorcycles come with a slip and assist clutch that offers seamless and precise shifts across revs. But the 390 Adv takes it ahead with the bi-directional quick-shifter that makes it a tad sportier. This can be also seen in the nought to 60kmph and 100kmph timings, which in case of the KTM are 2.9s and 6.22s respectively whereas that of the BMW are 3.12s and 7.63s respectively. The 390 Adv maintains its lead in roll-on acceleration figures as well. 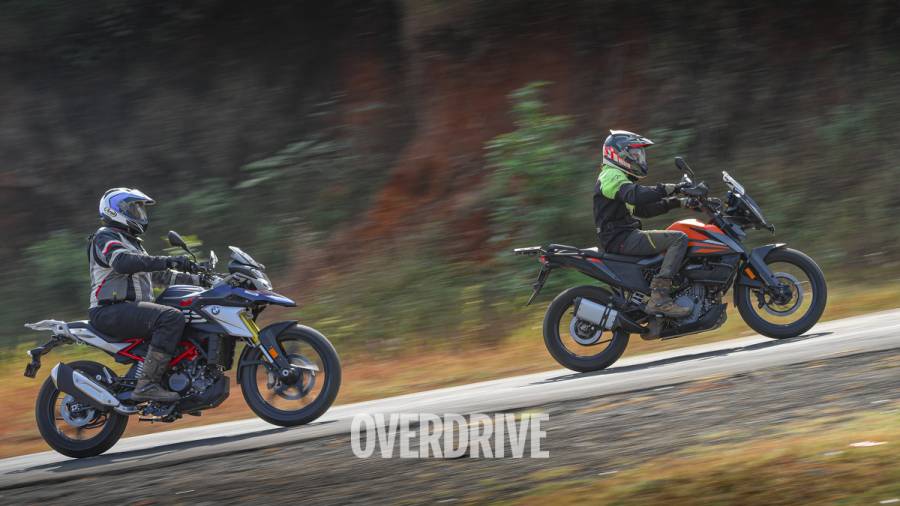 In terms of efficiency, the GS is more efficient than the KTM in the city at 23.46kmpl versus the latter's 19.24kmpl. However, the highway figures are quite similar at around 30kmpl. What make's the difference though is the full tank range. The GS returns an overall range of 260-270km whereas the KTM deliver a higher 310-315km, because of its larger 14.5-litre fuel tank. 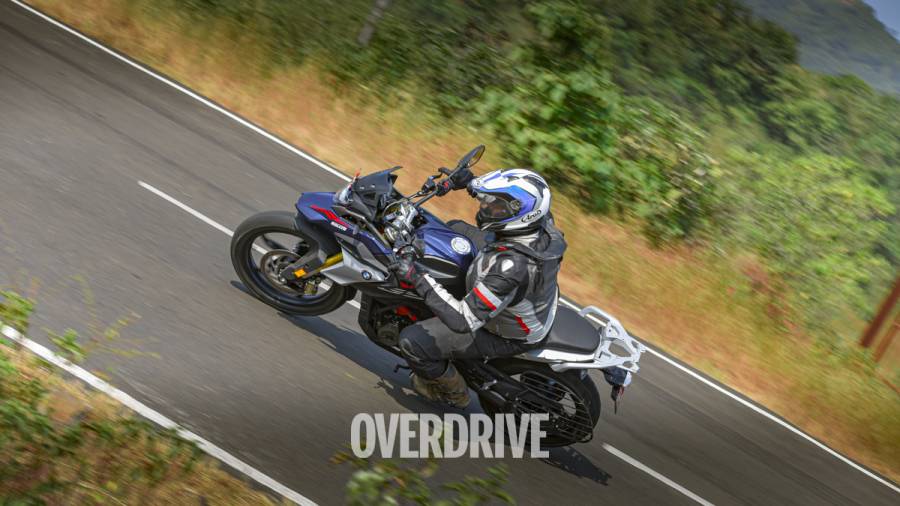 Even though the overall fuel efficiency of the 2020 BMW G 310 GS is higher than the KTM 390 Adventure, the larger tank size of the latter gives a longer full tank touring range 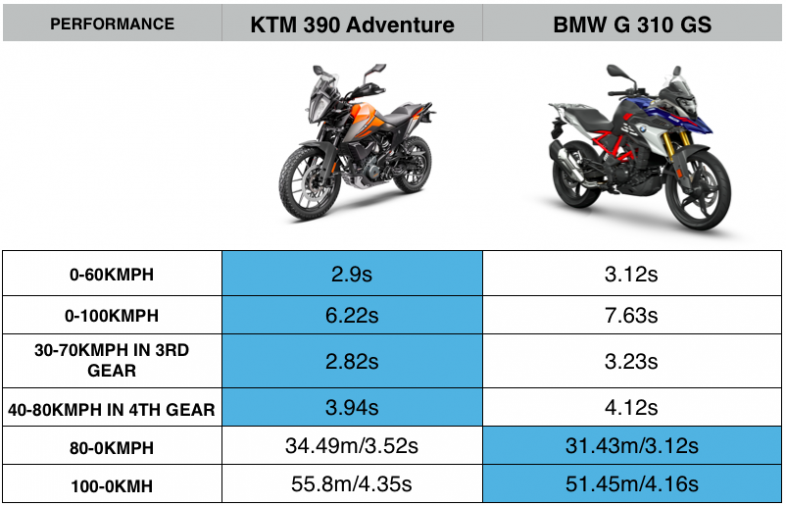 When Rohit asked me, which one among these two would I choose to do a K2K (Kashmir to Kanyakumari) ride, my response was the GS. And here's why. The intimidating presence of the GS is not just about big bike looks but has tremendous functionality over the KTM. The ergonomics of the GS is ideal for long-distance touring with its comfortable riding stance, sufficient area to grip the fuel tank, a well-contoured seat that slots in the rider properly, offers enough space for the rider and the pillion and is also positioned lower than the KTM and lastly, the convenience of a large stock luggage rack which can mount tail bags of various sizes. 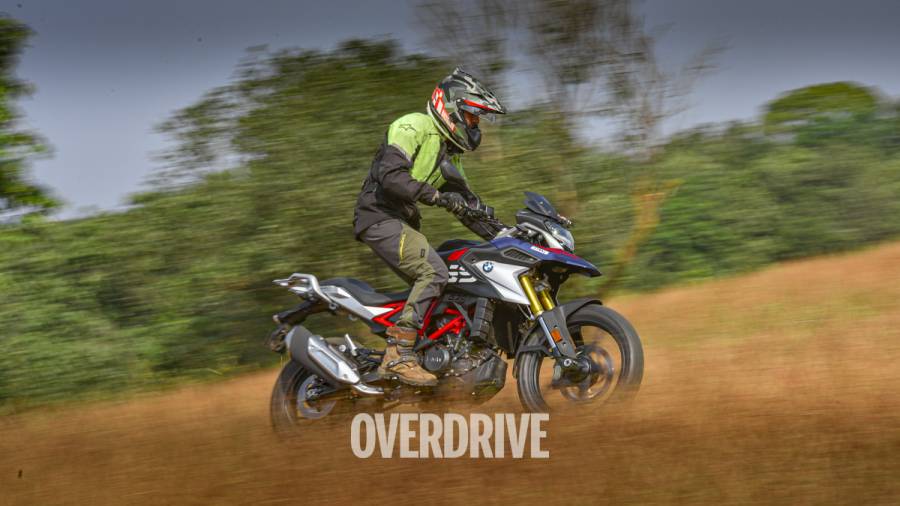 BMW has got it perfectly right with the ergonomics of the G 310 GS. The whole layout gives you great confidence when you venture off the tarmac

The 390 Adventure on the other hand gets flatter seats that tend to be slippery and also not as comfortable as the GS. This makes it a tiring affair if you are planning to be on the saddle for long hours. Also, the taller seat height of the KTM makes it a tad difficult for shorter riders as they end up tiptoeing on occasion. The 390 Adventure that you are seeing in these pictures has been personalised with handlebar risers and a luggage mounting plate, both of which add to practicality over the stock design. 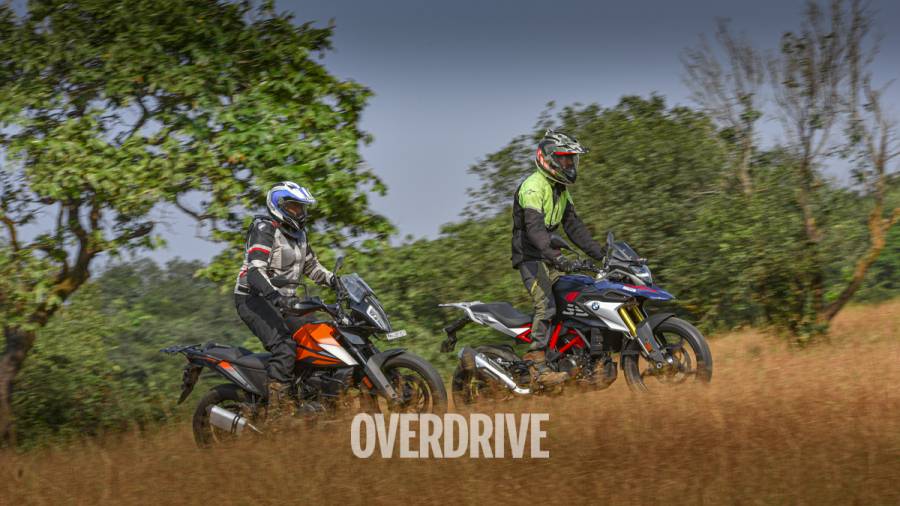 If you are someone who likes to wander on trails, again the GS would be the better pick over the 390 Adventure even with the latter's switchable ABS and traction control, as the confidence that the GS offers when you are standing and riding is far better than the 390 Adventure, wherein its compact tank design does not offer much surface to grip, that paired with the slightly tilted footpegs becomes a hindrance to get a firm footing on the motorcycle off the tarmac. Even while riding over rocky terrains, the GS with its better ground clearance and longer suspension travel feels more capable than the 390 Adventure. 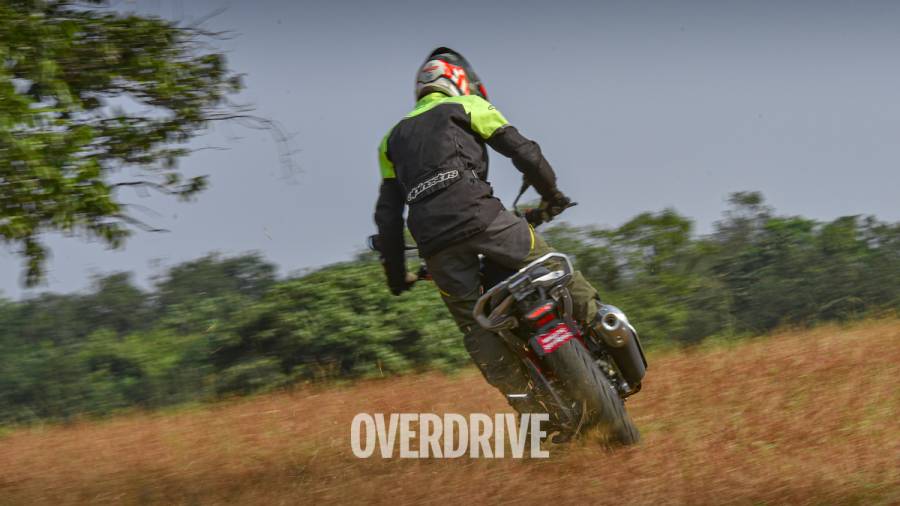 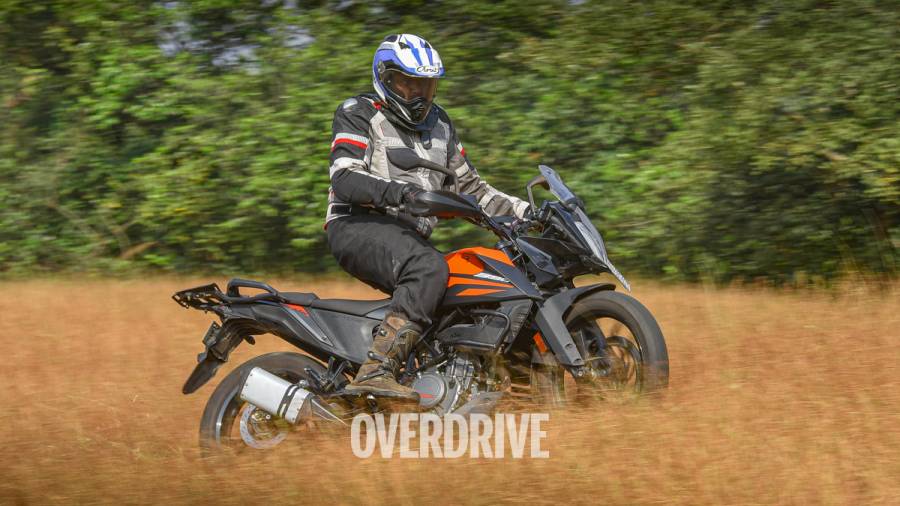 The KTM 390 Adventure is a lighter motorcycle, the dividends of which can be felt when you are manoeuvring through traffic, also making it more flickable when you are tackling multiple corners. On the tarmac, the WP suspension setup does a neat job of taking care of uneven undulations, however, the setup on the GS offers comparatively better feel when you chance upon broken surfaces and potholes. 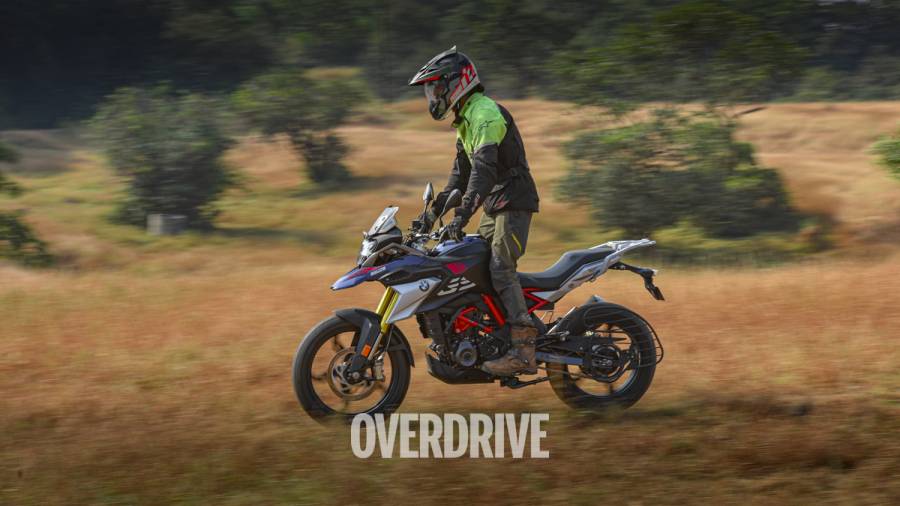 Both the motorcycles are shod with Metzeler Tourance tyres with the GS getting a wider profile. They offer near-identical levels of a firm grip on the tarmac. The difference, however, is in the braking performance wherein the unit on the GS offers better bite, taking lesser time and distance to bring the motorcycle to a complete halt.

Choosing a winner between these two was easier in our previous shootout, thanks to the GS' pricing back then. However, BMW has dropped the prices for the 2020 iteration making it Rs 3.32 lakh, on-road Mumbai, a good Rs 33,000 more affordable than the KTM 390 Adventure. 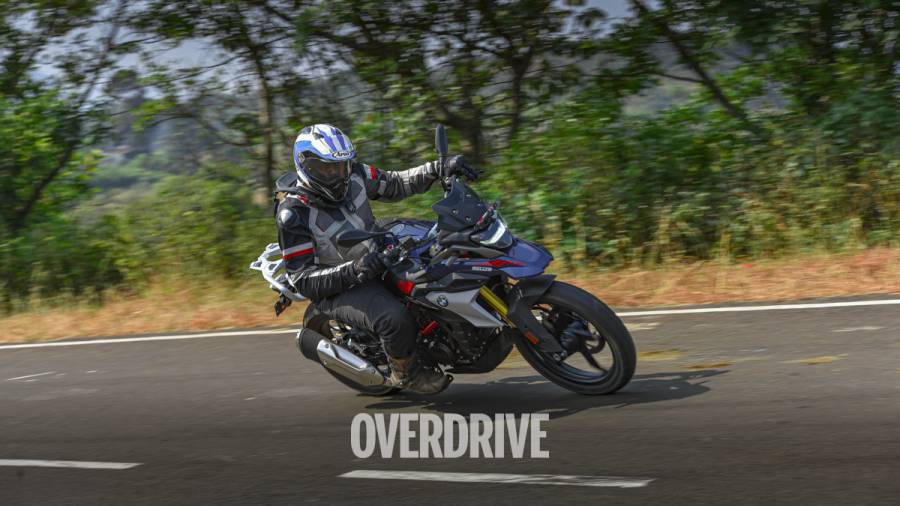 However, for that additional premium, the KTM 390 Adventure offers a lot more equipment along with the performance that you won't outgrow for a longer period as compared to the GS. That said, the KTM 390 Adventure is more of a tourer which is at its comfort zone on the tarmac. Ideally, KTM should have called it the 390 GT instead of Adventure.

With the new pricing, the GS has indeed become a sweeter deal, only if had the features and performance to back it up. But then, if you are looking for a premium entry-level off-roader and are ok with its equipment list, the GS surely makes the cut. 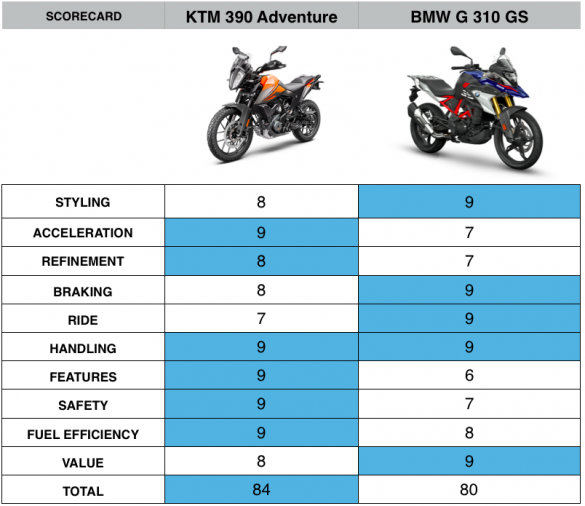