The two cars you see here are squarely aimed at your heartstrings. Not with high speeds or burly mud-plugging, but by simply being the most approachable means to get the three-pointed star or the white and blue propeller into your parking spot. And consequently, add a significant few notches to your street-cred. But this also means that the Mercedes-Benz A-Class and the BMW 2 Series Gran Coupe here need to meet all the expectations of the badges they wear but without burning a very deep hole in your pocket. Look at the two together, and it's apparent that they walk this tightrope in very different ways. The BMW 220d Gran Coupe here is in top-spec M Sport guise and is immediately the more striking one. The variant-specific Misano Blue helps this feeling significantly by bringing a sense of cohesion to some of the more exaggerated angles and lines on the 2 Series Gran Coupe. The sharper front bumper and the subtle black highlights of the M Sport trim along the sills and windows help with this as well. 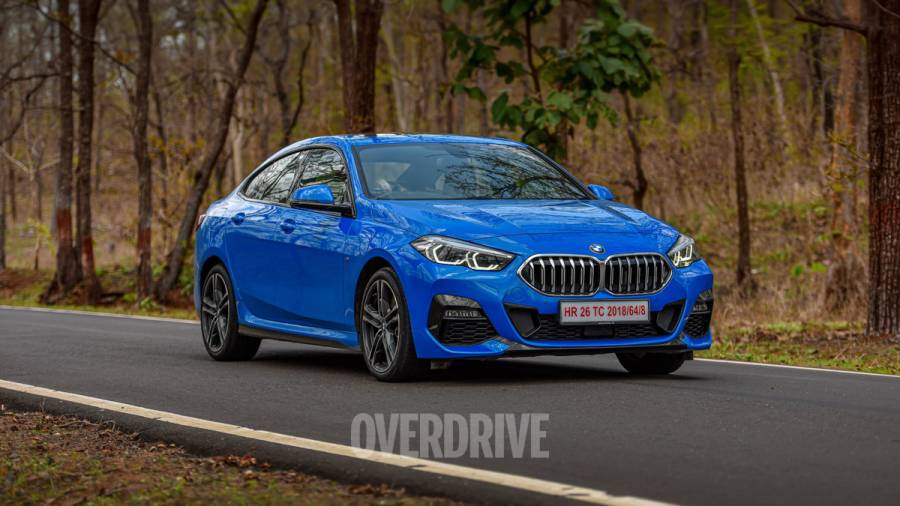 The 2 is also clearly more purposefully stanced, wider and lower than the Mercedes. The sloping coupe roofline and the intricate 18-inch M Sport wheels carry on this sense to the side while at the rear the wide LED taillamps, high decklid and the simple round exhaust tips add a genuine sense of athleticism to the looks. Although, these heavily stylized attributes are quite colour and variant dependent, and can look disproportionate when viewed from some angles. The lower Sportline variant or a flatter paint option, closer in intent to the A-Class here, can't quite reproduce this sense as well. 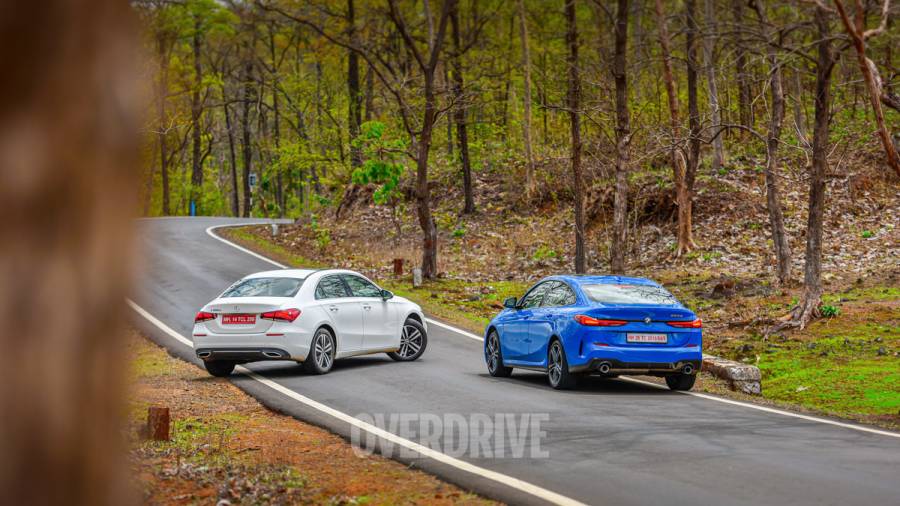 The second-generation A-Class, now only available in Limousine form in India, is much more of a conformist, which will probably widen its appeal. It stays fully in line with what a Mercedes sedan should look like with the same sense of straightforward proportions and stateliness. The styling is typically modern Mercedes, with the same angular headlamps, a grille that is as large as the one on the BMW but nowhere near as shouty, and restrained surfaces. 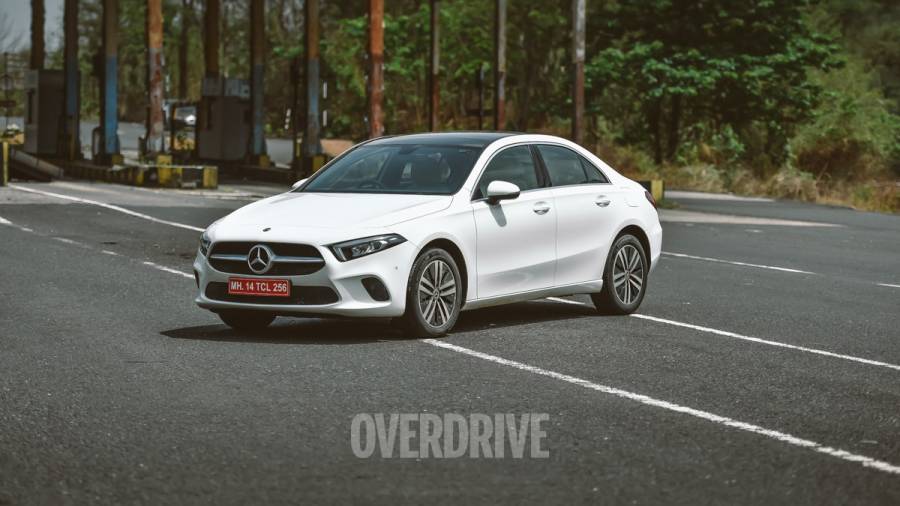 The upright glasshouse and the simple rear section add to this sense, although the heavily detailed taillamps and subtle chrome all-around add a touch of flair. The 17-inch efficiency-focused wheel designs are in sync with the more sober theme of the Mercedes although a brighter palette of colours and a maybe an AMG Line version, as available on the GLA, could have been offered to appeal more to the younger buyers this segment attracts 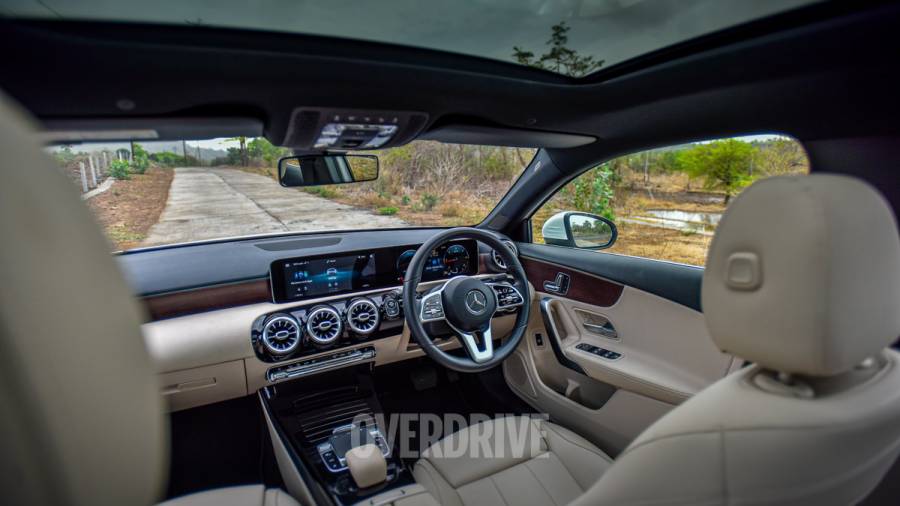 As first impressions go, the new A-Class makes quite a striking one once you've stepped inside. The layout of the dash is as richly textured, with contrasting open-pore wood and soft materials, as on any of the brand's larger sedans. The same can be said for the BMW but the widescreen infotainment layout, the aluminium roundels for the air vents and the stepped effect to the dash-face add a greater sense of occasion to the Mercedes. Look closer and the BMW claws back lost ground. It's the better built of the two cars with switchgear that feels a touch more tactile, plastic quality in the lower reaches of the cabin is noticeably better than in the Mercedes as well. The discreet cabin lighting is a nice foil to the much more prominently highlighted colours in the A-Class. It's also the easier one to interact with through more thoughtfully placed buttons and an easier to reach infotainment screen. There's a bit more of a learning curve to the Mercedes's MBUX but once past this, it offers a rich mix of colours and functionality. Plus, the driver's display is far more intuitive here, dispensing more information legibly. 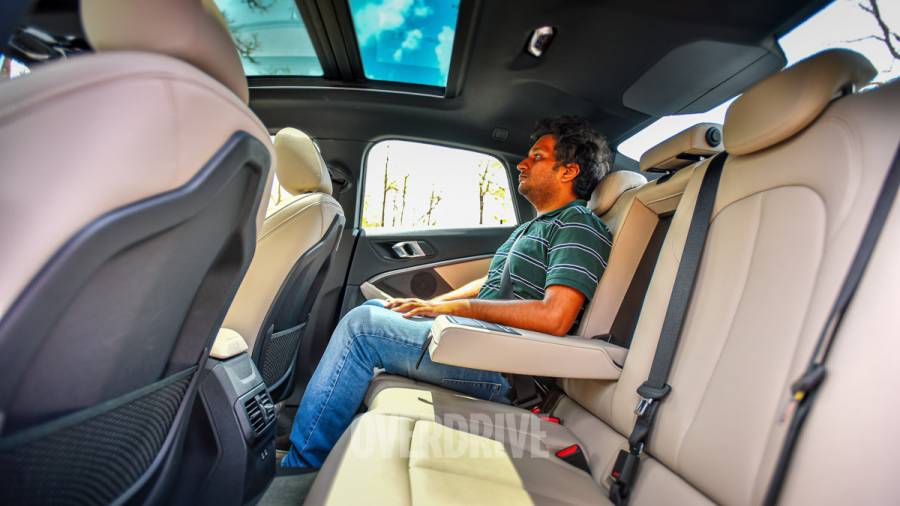 So far fairly even, the 2 Series Gran Coupe is faced with one distinct shortcoming that could well be the deal-breaker for many shopping in this segment. The sloping roofline and the significant 59mm deficit in wheelbase mean that it's a tight fit in the rear seat of the 2 Series. While both offer middling under-thigh support, there is a noticeable lack of legroom in the BMW, especially if you're above average height. The panoramic sunroof and the lowered roof also eat into headroom while the eye-catching frameless doors aren't very big, making getting in and out more difficult than in the A-Class. Neither of these sedans will be kind to the third passenger, with big central tunnels and their narrower track widths. But the A-Class does a better job of mimicking the ambience of its larger siblings. Ingress and egress are easier and you sit higher up as well. Further, the more conventional roof design and glasshouse, with the lighter colours, makes the Mercedes the best pick for those looking to spend most of their time in the back seat. 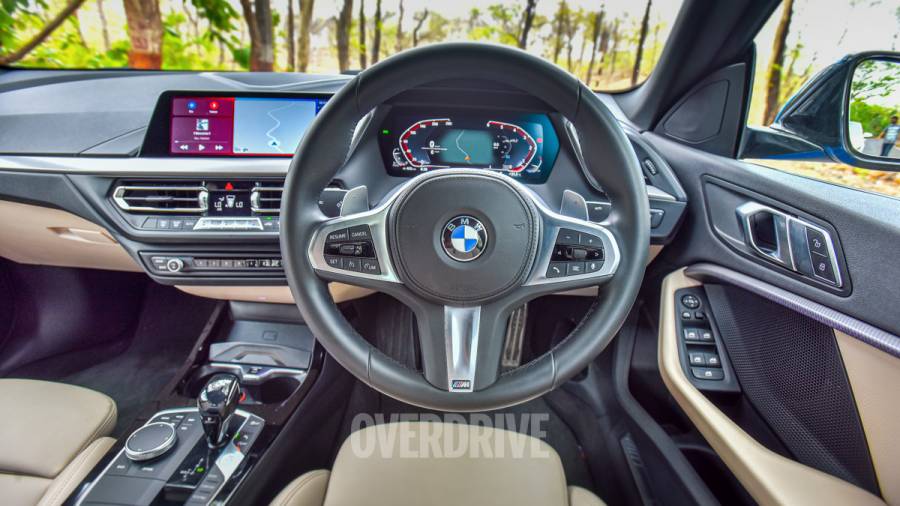 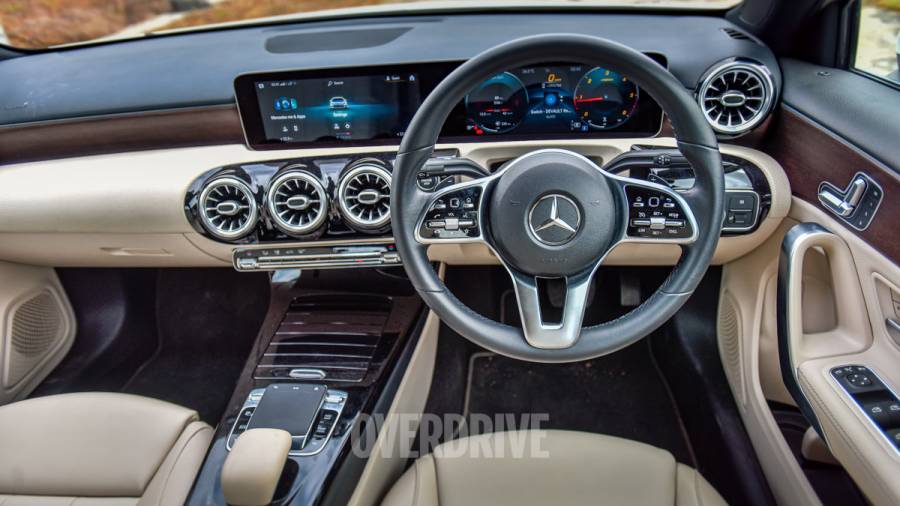 The A-Class has another advantage with the features its offers. Only a single fully loaded variant is offered unlike the 2 Series, but the Mercedes adds the seat kinetics massaging function to the front seats and the Mercedes me suite of connected car features. The BMW also offers a voice assistant with gesture controls but without the connectivity functions, and a more adjustable front seat with movable side bolsters. The two cars are otherwise largely evenly matched in terms of conveniences with dual-zone climate control, auto headlamps and wipers, LED lighting, wireless and panoramic sunroof. Notably absent on both is a branded audio system and ventilated seats, although the 2 Series thoughtfully still offers USB Type-A ports although no Android Auto compatibility. 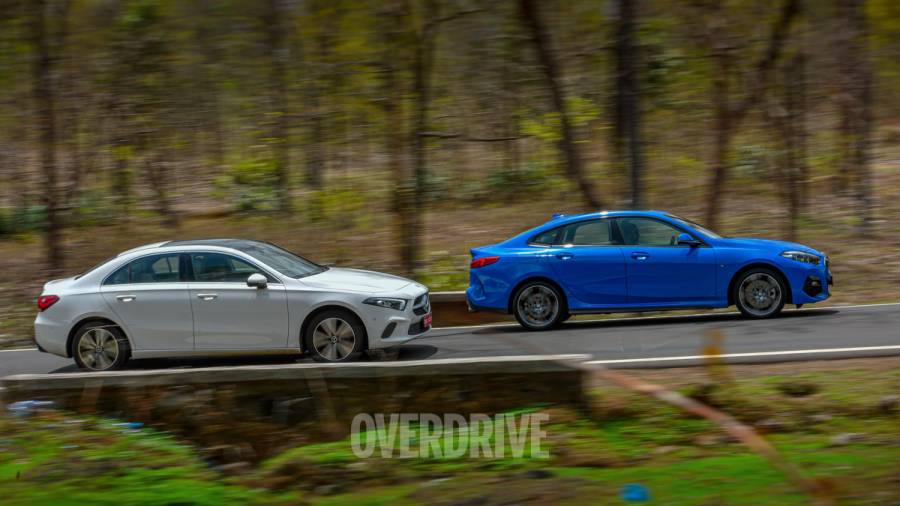 You place yourself, rather than slide onto the 2 Series' heavily bolstered driver's seat, which is an apt preface to the experiences it offers from behind the wheel. You sit much lower to the ground than in the A-Class too, which adds to the promise of a more engaging drive. On the move, the 2.0-litre diesel feels much the same as it does in some of the brand's larger offerings it finds itself in. This means lag is more or less imperceptible with a wide and consistent spread of torque throughout. The Aisin 8-speed torque converter is similarly competent here, as in its other applications. Shifts are well-timed and largely meld into the background. These attributes seem to, by the numbers, fully exploit the significant advantage the BMW(190PS/400Nm) has over the Mercedes(150PS/320Nm) in terms of its engine outputs. 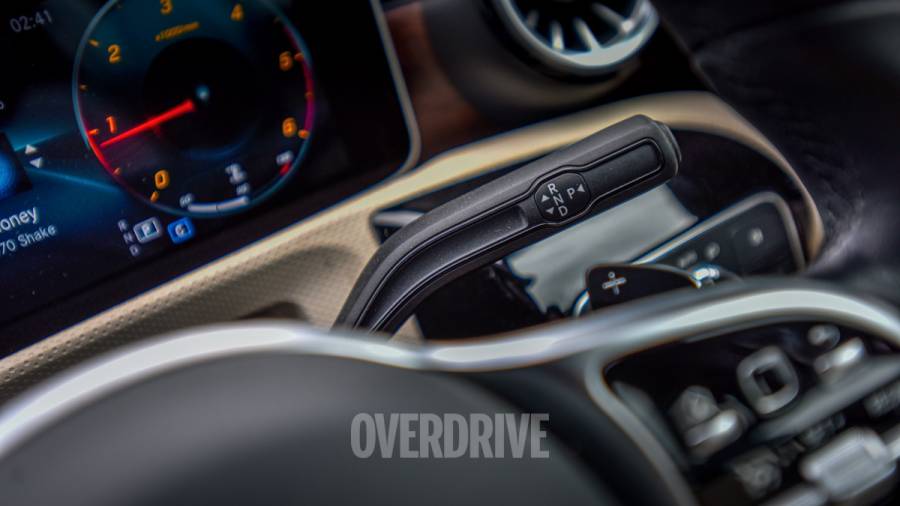 But this performance gap isn't quite as apparent in the real world. In stop-go traffic, the Mercedes can seem a bit caught out by the relative lack of low-end performance, somewhat highlighted by its more audible nature here, but once allowed to stretch its legs this OM 654 motor feels very close to the BMW's engine in the way it responds. The deficit in outputs is only apparent well into triple-digit speeds. Based on the MFA2 FWD architecture, the Mercedes pairs its engine with the new eight-speed DCT. Some of the chronic low-speed hesitancy that characterises DCTs is apparent but this smoothens out the faster you go, where there is little to differentiate the two powertrains on a highway cruise. But the pay-off is the exceptional fuel efficiency that the Mercedes manages. But the defining attribute of the A-Class on the move is its ride quality. Despite its simpler torsion beam rear suspension setup, the A-Class handles bumps and potholes or even our undulating highways, exceptionally well. The level of pliancy it offers sometimes matches or surpasses some of its larger brethren. There's none of the slight choppiness typical of these European luxury cars on our roads, the A-Class does well to keep occupants isolated at most times. The BMW falls short by way of its flashier wheels and the 45-profile tires it rides on. The Sportline version may solve this but in this M Sport trim, a veneer of firmness never leaves the BMW when you are on the move. This also translates into constant minor body movements at higher speeds that can feel amplified at the rear. Having said that, BMW has done well to give the 2 Series a level of compliance hard to find with such wheel and tire combinations. This firmness aside, the BMW doesn't allow too many imperfections to filter through into the cabin. 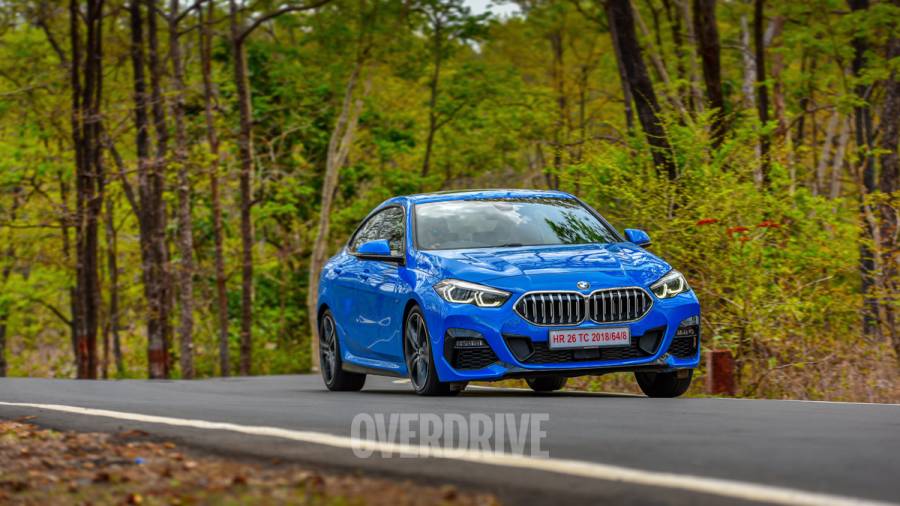 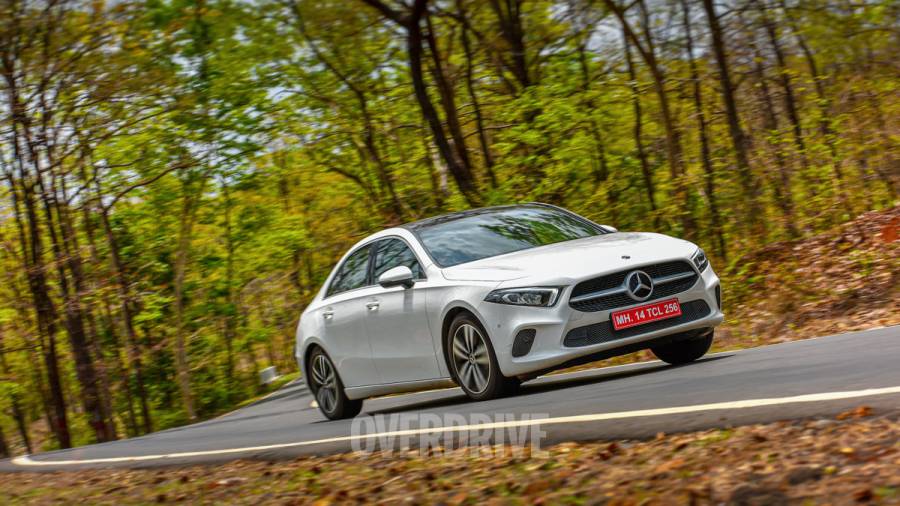 The positive to this aggressive set-up is the way the BMW feels when driven hard. It's clearly the choice for you if you like driving, with the kind of composure its hows around bends. The inherent balance of a rear-driven 3 Series may be absent, but the BMW feels light-footed and predictable. It gives you a good sense of where it's placed on the road, despite the inconsistent feedback from the steering wheel, and the powertrain is even more alert in the Sport mode. The ARB (actuator contiguous wheel slip limitation) system, which reacts three times quicker than a traditional ESC based system to brake the inner wheel to cut slip and consequently understeer, is a great tool to have. It allows the car to turn in swiftly and hold its line consistently, even if it isn't the most natural feeling of these new handling aids. The A-Class needs a more measured approach in such situations. The fairly skinny 205 section tyres offer up a good amount of grip but the Mercedes need a touch more effort from the driver to turn direction quickly. The nose doesn't feel as precise and there is some more roll to manage as well. It also tends to run wide more easily, without any fancy handling aids. The engine though feels strong in the Sport mode and the otherwise light steering feels more consistently weighed than the BMW's. The DCT isn't quite as intuitive here, sometimes delaying downshifts for a bit longer than ideal, although taking manual control solves that anomaly.

The A-Class is clearly the safer car here. It offers a segment-first active braking function which is somewhat effective at predicting incidents but limited by the absence of radar-based assistance systems. There is also an active bonnet that props up on impact to protect pedestrians better, along with the usual array of airbags, ESC and ABS. Unique to the BMW is a braking function for the cruise control system as well as the reversing assistant that retraces the last 50m to your parking spot. The BMW 2 Series is the one for the driver. It feels close to, if not completely as a BMW should and offers up enough thrills to liven up your drive when you want it to. The superior perception of quality is another attribute that cements itself as being worthy of the badge it carries. The wider variant mix is an advantage too, with its lower entry price. The Mercedes A-Class, though, edges it with its stronger set of features and the far more liveable cabin. Add the impeccable ride quality and an engine that doesn't feel outgunned here and the Mercedes' appeal widens to cover more of what a first-time luxury buyer expects.