I'll cut straight to the chase this time, because this comparison test needs no introduction. It's a rematch between two of the oldest and most iconic motorcycle brands in India, Royal Enfield and Jawa. The battle lines were drawn again a year ago when Classic Legends resurrected the Jawa brand and brought the Jawa back in an all-new avatar, to take the modern day 'Bullet' head on. And we're finally getting an opportunity to pitch the new Jawa against its arch nemesis, the Royal Enfield Classic 350. Get down to business then, shall we? 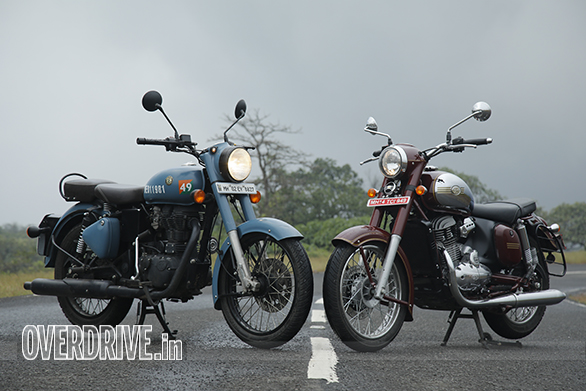 The Jawa/Yezdi and Royal Enfield rivalry is one of the oldest in the history of motorcycling in India and it's interesting to see how both brands have progressed and changed over the years, but the rivalry continues

I always feel designing retro motorcycles is more difficult than designing, say, sportsbikes. The latter requires a sharp, aerodynamic design, which is relatively easier to achieve than styling a motorcycle with curves and lots of detailing to look arresting. And the Jawa and Royal Enfield both are well-executed designs. Sure, the Royal Enfield Classic 350 has been around for a decade and is a common sight but that does not take away the fact that it is a nice looking motorcycle. The Classic reminds of British motorcycles from the 1950s, which is the combined effect of its round headlamp, fuel tank design, split seats, long exhaust and also the wire-spoked wheels. Revised paint schemes have also ensured the bike looks fresh. So despite being around for far longer, I don't think the Classic 350 needs a makeover except for a few tweaks. 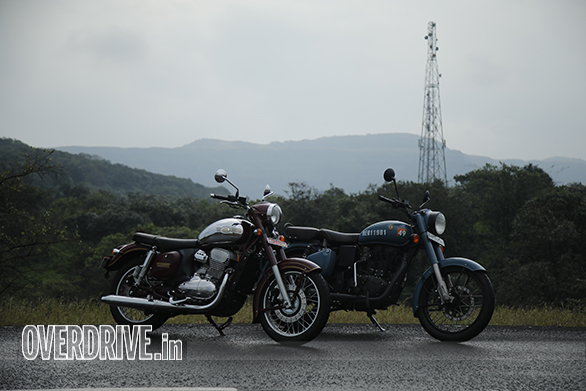 The Jawa on the other hand is just a year old to say so. It has been styled to look exactly like the original and Classic Legends has done a commendable job especially with details like the lines, paint scheme, the Jawa name and logo being positioned all over and the way the headlamp housing also houses the handlebar mount, just like the original. The Jawa also gets twin exhausts like the original, which add to its appealing looks. What's more, at first glance I was concerned that the chromed fuel tank would be a fingerprint magnet, but that is not the case. Overall the Jawa is the better executed and more tastefully designed motorcycle of the two. So as much as I like the Classic 350's looks even today, admittedly the Jawa is the better looker here. 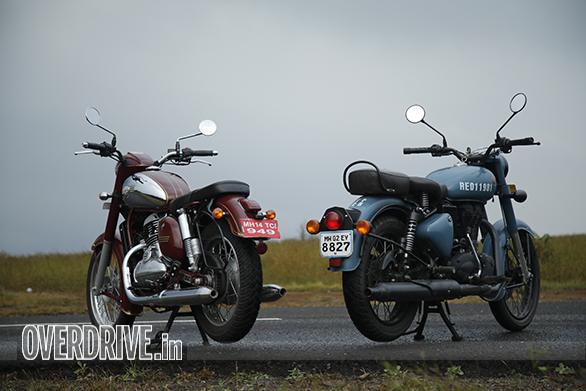 The new-age Jawa uses a dual exhaust set-up to look like the original, while the Royal Enfield Classic 350 looks properly like British motorcycles from the 1950's

Credit where it's due though, the Classic 350 has a more robust build. It feels like a solid lump of metal and can take on pretty much any amount of battering, as proved by it over the years. The Jawa on the other hand only feels par for the course. Royal Enfield has also upped its game on the reliability front and given the more modern construction of its engines now and better quality of components, engine issues and leaks are pretty much a thing of the past. The Jawa has an advantage though thanks to its more modern engine architecture and I also expect it to not give owners reasons to be concerned. Both disappoint on the functionality front though. Side stands on both motorcycles are not the easiest to operate, especially the Jawa's. Then there's the instrument clusters. The Jawa has the better looking cluster and a fuel gauge and a tiny digital display for the odometer, but its inverted speedometer isn't the easiest to read. The Classic 350's cluster is what we have been seeing for long and looks archaic with only has a tiny bulb in the name of a backlight, so it's almost impossible to read the odometer in the dark and it does not get a fuel gauge either. Neither motorcycle gets a tripmeter which is appalling in today's day and age.

We usually hear people say 'age is just a number' in reference to humans, but in the case of the Classic 350 the saying applies to its engine too. Royal Enfield hasn't really reworked its engines or transmissions in a while, but its current setup seems to chug along just fine. That will change once the BS VI compliant version comes in though. Of course, a Royal Enfield like the Classic 350 has always been more about the thump rather outright performance  that's what the typical RE buyer wants and the bike delivers that, albeit a lot more muted than the Enfields of yore. That said, the Classic's engine character and feel are appreciated by purists even today. 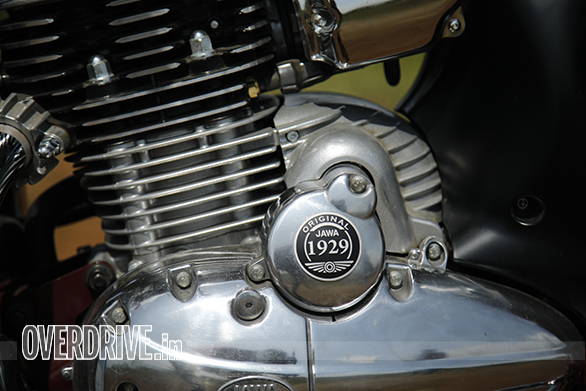 The Jawa has the more modern powertrain here - a liquid-cooled, 293cc, single cylinder motor with a four valve setup along with a six-speed gearbox. Its outputs are also higher at 27PS and 28Nm. In comparison the Royal Enfield Classic 350 uses a 346cc, air-cooled, two-valve, single cylinder engine that puts out 20PS and 28Nm

The Jawa uses a thoroughly modern engine though that gets a 4-valve DOHC head, fuel injection, liquid-cooling and is mated to a six-speed transmission unlike the Classic's 2-valve head, carburetted fuelling, air-cooling and five-speed 'box. The Jawa engine is also more refined and relatively vibration-free but lacks the Classic 350's character, as it sounds too modern and its exhaust note is just like any other current-day motorcycle. This is a miss, as the Jawa engine has an advantage over the Classic 350's on several fronts. It displaces 293cc while offering 27PS and 28Nm, as compared to the Classic 350's 346cc, 2-valve motor that puts out 20PS and 28Nm. The Jawa engine is also quicker to rev unlike the Classic that revels in its laidback nature, though interestingly, the Jawa engine feels stressed when revving hard unlike the RE engine which feels like it's doing just fine despite the vibration. 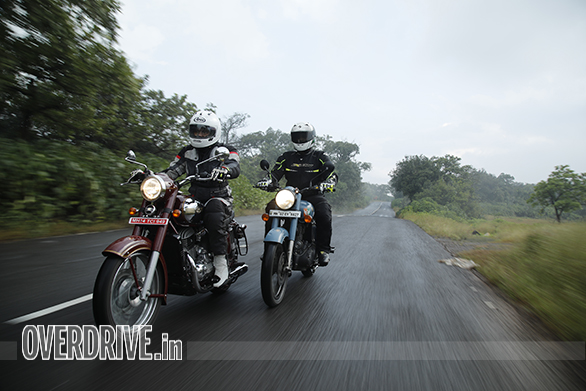 On the road the Jawa is the quicker motorcycle of the two, obviously, courtesy its higher outputs, as also the fact that it is over 20kg lighter than the Royal Enfield Classic 350

Unsurprisingly the Jawa is significantly quicker and clocked a 0-60kmph time of 4.2 seconds in our tests as compared to the Classic 350's 6.51 seconds. The Jawa clocked a 0-100kmph time of 13.01 seconds, whereas the Classic just ran out of steam before getting to triple digits. Its higher power output certainly helps the Jawa but more importantly it is over 20kg lighter. The Jawa's sixth gear also endows it with longer legs, making it better suited to riding distances, though the RE pulls along even today and has no trouble holding 80-90kmph at any point of time. Interestingly the Classic feels torquier despite the identical outputs and has a more tractor-like feel, while the Jawa feels like a streetbike.

The Classic leaves you with buzzy hands thanks to the vibration from the handlebar though. The Jawa feels better, as it has vibration come in from the footpegs only. The feel is similar in city with the Jawa feeling quicker and crisper thanks to its higher power output and fuel injection, while the Classic is best ridden in laidback fashion. And then there's the fuel efficiency. The Jawa returned 28.21kmpl in city and 34.37kmpl on the highway in our tests with its sixth cog and modern engine while the Classic managed 24.6kmpl in city and 31.51kmpl on the highway  blame it on the bike having a cog lesser and weighing 20kg more.

The Jawa's lighter weight, as also its smaller wheel sizes (18 and 17 inches) help it handle better as compared to the Classic that uses a 19 and 18 inch wheel setup. Neither motorcycle is intended to go fast around bends but the Jawa feels slightly more engaging and planted. The Classic 350 though feels more confident on bad roads, as its larger front wheel allows it to tread better. That said, both feel equally planted at high speeds. The Jawa better the Classic 350 on the braking front though, offering slightly better feel while also covering lesser distance. 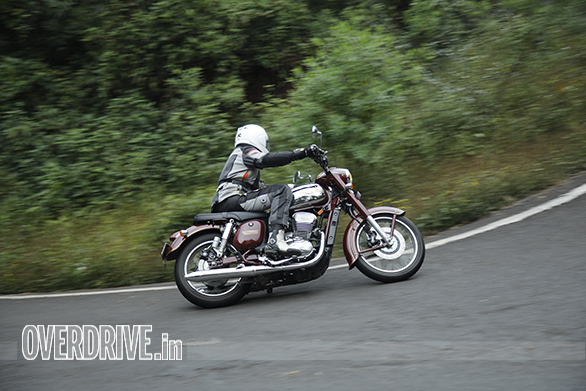 The Jawa's 18/17 inch wheel setup makes it surer-footed than the Royal Enfield Classic 350 around corners. In comparison, the Classic is more confident to ride on broken roads thanks to its bigger, 19 inch front wheel

Despite the suspension setup on both being on the firmer side  both use telescopic forks upfront along with gas charged rear shock absorbers  the Classic 350 and Jawa offer impress ride quality. Both cushion the rider well from ruts and potholes but the Classic 350 uses a spring-loaded seat which makes for additional cushioning. On the other hand, the Jawa seat is not comfortable at all as the cushioning is soft and not thick enough, so the seat thus has you start squirming in relatively shorter time periods as compared to the Classic 350's seat. 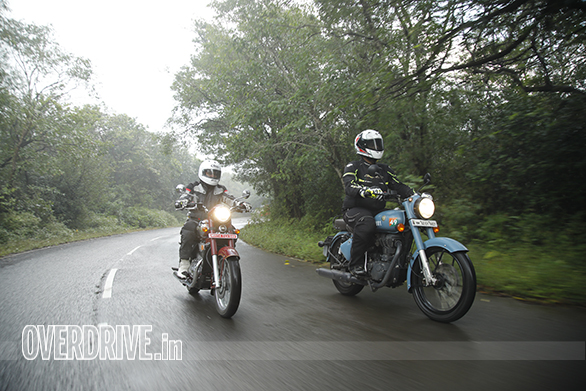 The Royal Enfield Classic 350 uses a spring-loaded seat for the rider which with better cushioning, which makes it more comfortable than the Jawa's one-piece seat that's not as comfortable, particularly because the cushioning is not good enough

Jawa has the better and more comfortable seating position though with its taller handlebar and lower seat which make for a better stance. The taller handlebar also offers better leverage when maneuvering. The Classic 350's seat is taller at 800mm (765mm on the Jawa) and it also has a shorter handlebar, so its riding position is not as comfortable. But on the same note, the Classic 350 suits taller riders better thanks to its taller stance and higher seating. In comparison the Jawa feels a lot smaller with a six footer on board and is better suited to shorter riders, visually at least.

The Classic 350 and Jawa both lean heavily on the legacy of their brands and use their history to their respective advantages, in a bid to make themselves indulgent buys. Both are motorcycles purchased out of the want for something retro, rather than the need for a set of wheels and both fit the bill well, though the way they offer that retro feel differs from each other. All said and done the Jawa proves to be the better motorcycle, despite a few shortcomings. The Classic 350 betters it on a few fronts but fall shorts on several others, while also feeling more dated. The Jawa and Royal Enfield Classic 350 have their own charm and both enjoy immense popularity with retro bike lovers across the country. But with that said, the Jawa is the better buy of the two currently, considering what it brings to the table. But then, we know that a seriously revamped, BS VI compliant version of the Classic 350 will be out soon, which might have us revisit the scoresheets

The Jawa also has the more modern powertrain which works in its favour. However we will have to see how the BS VI-compliant Classic 350 turns out to be, as it is set to get fuel injection along with few other updates including tweaks to the design and better instrumentation. So if you are in a hurry the Jawa makes more sense currently, despite being priced higher than the Classic 350 range. But we might just have to revisit the scoresheets once the updated, BS VI-compliant Classic 350 comes out.