For the last couple of years, auto enthusiasts like ourselves have been hoping and praying for Yamaha Motor India to bring its XSR 155 to our country ever since it was launched in Thailand back in 2019. Now that neo-retro theme motorcycle came across as a very interesting proposition because it was based on the Yamaha R15 . That dynamic Deltabox chassis, the rev-happy engine among some other parts in common, it all looked an absolute treat. At least, on paper, it did. Now the year 2021 and Yamaha finally have an answer to our prayers... well, somewhat. This retro-styled motorcycle is the Yamaha FZ-X and this bike is based on the Yamaha FZ series  a series of sound bikes that's done very well out here in India. So let's see what this one's all about then, shall we? In terms of its design, the FZ-X is definitely an odd-ball of sorts. There are some nice looking functional parts on the bike, and then there are some rather odd-looking bits as well. Like the headlamp unit with its snazzy DRLs which look neat, and the negative LCD display with Bluetooth connectivity that comes across as both modern and old-school. Then there's bits like the radiator shrouds when there's no radiator, a metal bash plate on the underside when the suspension is the same as the standard FZ, so if you've ridden the older bike, you'd tend to wonder why it's even there, because the suspension isn't all that soft. The bike also gives off this scrambler-ish vibe with its metal front mudguard, that solid looking tank, the bash plate underneath... then there's bits like the fork gaiters, and the block pattern tyres that give it the appearance of being an off-road-ready machine. The fuel tank on the X is a lot bigger than the one on the regular FZ 150, but in terms of fuel volume, it holds just 10 litres of fuel which is 3 litres of fuel less than the standard FZ tank does. So stopping for fuel will be a little more frequent. Also, the tail section of this bike looks quite spartan with a rather simplistic grab-handle that sits over the LED tail lamp. 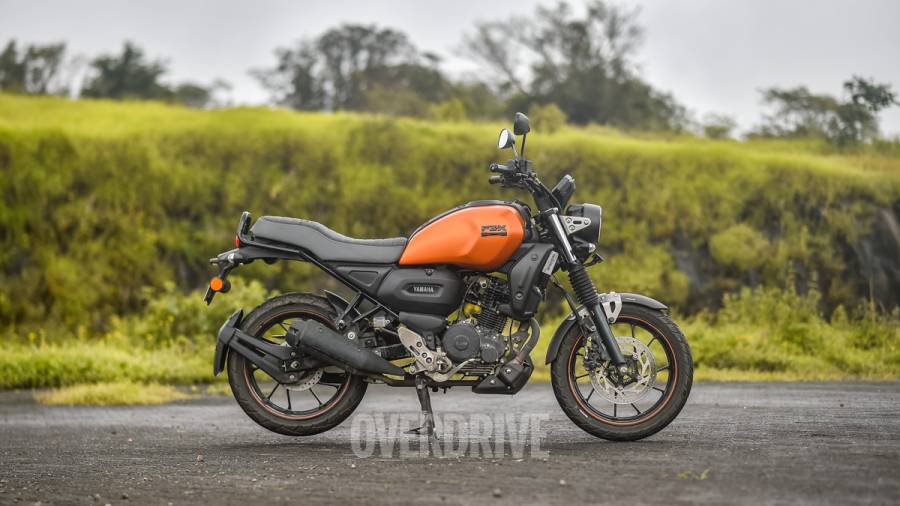 The FZ-X shares a lot of its hardware with the other 150cc FZ bikes. The air-cooled 149cc single-pot motor, is one of the least powerful engines in its class - with its peak power of 12.4PS @ 7,250rpm and peak torque of 13.3Nm @5,500rpm. The FZ-X also gets the older bike's slick 5-seed gearbox. The motor slots in single downtube frame which is the same as the FZ and suspension duties are carried out by a telescopic fork at the front and preload adjustable monoshock at the rear. Yes, and the 220mm front and 282mm rear disc brakes are the same setup as that on the standard 150cc FZ too. 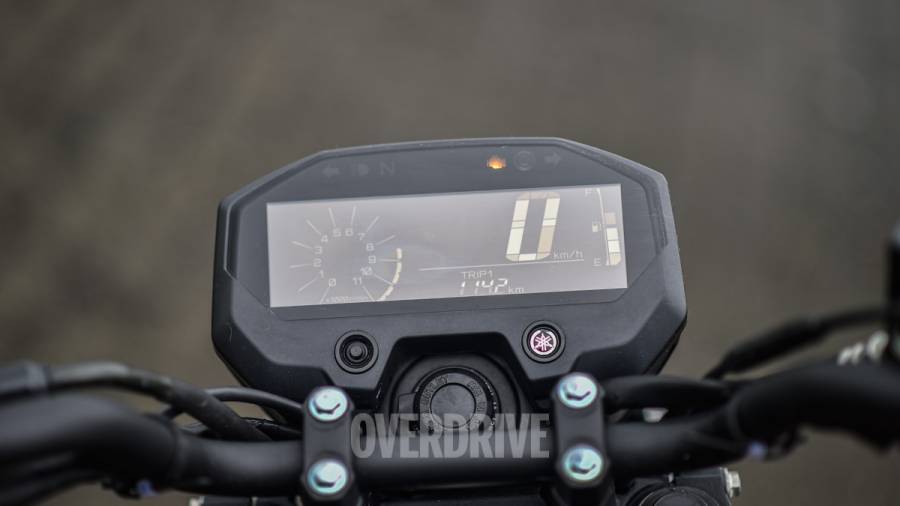 The FZ-X comes with Bluetooth connectivity, but this feature is standard on the top-spec variant, which cost you round Rs 3,000 over the cost of the standard FZ-X model. This feature gives you access to info on the bike, like its average fuel consumption, access riding logs and such. You can even schedule services and a lot more via your smart phone. It also shows message and call notification details on the LCD once connected, but doesn't support navigation. The bike also gets 12V power outlet on the handle bar which is nice and convenient for when you need to charge a portable device on the go. 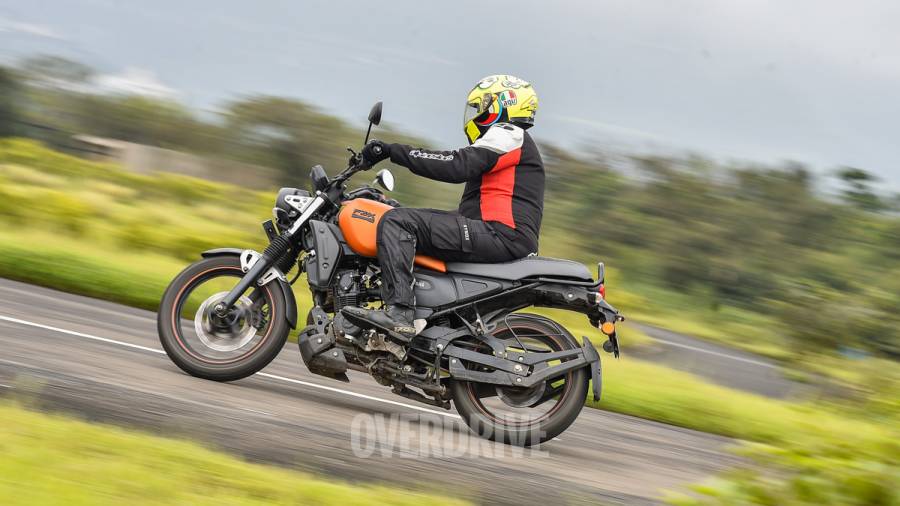 Now the Standard FZ isn't a very quick motorcycle, and the FZ-X weighs around 4kg more thanks to its metal parts. So downright performance isn't one of this bikes fortes. The FZ-X has good amount of low end torque and mid-range performance is just about decent. It's nice and smooth at normal speed which is great for city usage. However the top end performance of this bike is very weak. When you need to overtake a vehicle quickly out on the highway, you'll have shift down a cog or even two, and you'll have to have the throttle fully open for some time. It's not the kind of motorcycle you'll fancy yourself on if you have to get to where you're going in a hurry. The bike felt comfortable at around 70kmph with the engine feeling over stressed. Past 80kmph, it feels like it's being ushered out of its comfort zone. Cross 100kmph on the FZ-X and you feel like you've accomplished a near-impossible feat. 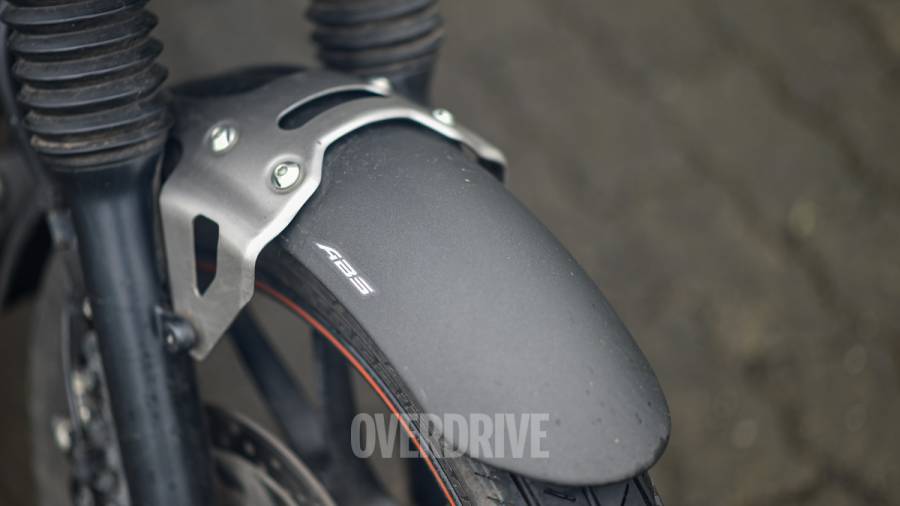 The FZ-X feels like a nice and light motorcycle to ride. The chassis is the same as on the regular old FZ and the X is a bike that doesn't mind being tipped into corners, but the riding position you're seated at doesn't favour overly enthusiastic riding styles. Turning radius is good and it's not tall, so if you're vertically challenged, you won't find this bike a real problem to deal with. The raised handlebar and the forward set pegs will have you riding in a very upright position. The seat is very soft, and it's really comfortable over short rides. The seat itself protects your posterior from sharp bumps, which is great for the city. Out on the highway, on longer rides, the seat can be a little uncomfortable to deal with, but the good thing is that there's a good amount of space for you to reposition yourself. The tyres provide a good amount of grip on paved surfaces and managed some light off-road stretches quite well too, but I wouldn't recommend pushing too hard on this set. I even found the brakes with single-channel ABS to work really well even in wet riding scenarios. 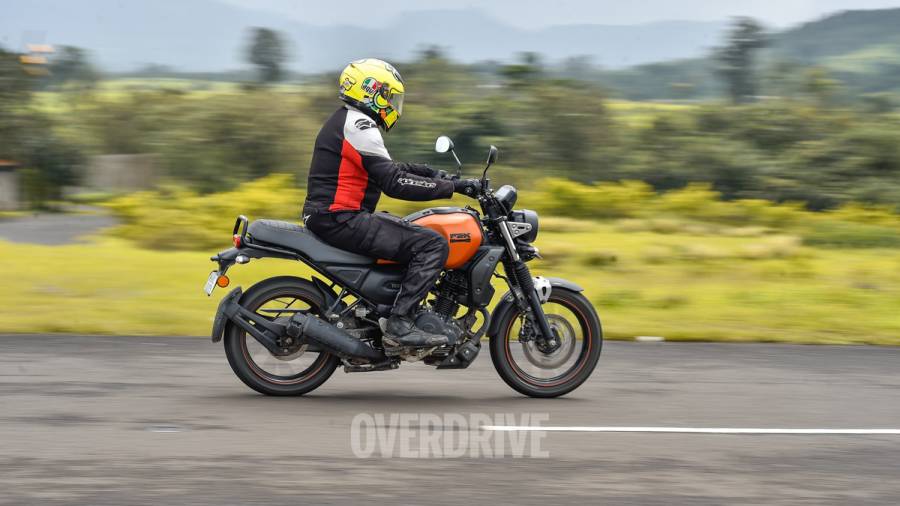 Now this bike looks rugged and its even got an X in its name, which would usually imply some extra off-road prowess, but in terms of off-road capability, the FZ-X doesn't manage to do anything better or more than what the standard FZ is capable of managing. The X has the same amount of suspension travel and even the same wheelbase as the older bike, just that the new pattern tyres might give you a little more grip over some minor rough patches. 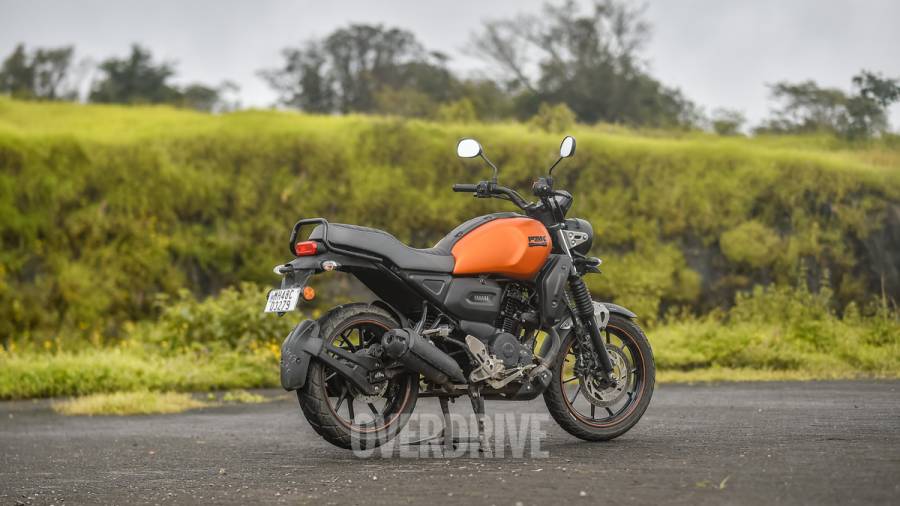 The Yamaha FZ-X cost approximately rupees 12000 more than the standard Yamaha FZ model and what you're additionally paying for is the rugged-looking neo-retro styling and a slightly tweaked ergonomics package. In terms of functionality is the FZ-X more capable than the Standard FZ model? No it isn't. The only reason you would basically want to buy this motorcycle is if you fancy yourself a rugged-looking commuter motorcycle that is configured for a comfortable low-speed ride.